As most monster kids my age did, I spent little to no time playing sports growing up. Instead, I spent my weekends watching any and all monster movies that I could find on TV. Each Tuesday, when the new TV Guide came in for the following week, I would go through page by page making myself a list of what movies were playing, on what station and at what time. Then I would try to watch as many of them as I could, of course assuming that our TV’s UHF antenna would actually be able to draw the station in at the time the movie was airing. 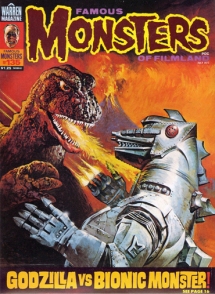 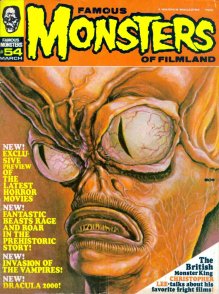 On occasion, I would also score the latest issue of Famous Monsters of Filmland. I remember reading and re-reading these issues front to back, studying every picture and then drooling over all of the monster goodies offered for sale in the back of the magazine from Captain Company. I found myself drawn all the time to the full page black and white ads featuring Halloween masks by Don Post Studios. In a time well before the internet, this was really the only way I could appreciate these works of art and at this time never thought of writing and requesting a color catalog.

Eventually, full-color horror and monster magazines such as Fangoria came out, showcasing ads not only by Don Post but a company known as Distortions Unlimited as well. I ordered their full-color catalog and I was hooked. I was also introduced to two other mask companies, House of Horror Studios and the subject of this blog, Zagone Studios (formerly known as Be Something Studios).

In 1985 I started my first job and with some extra cash on hand, bought my first Halloween mask. It was the Shrunken Head by Be Something Studios. I was instantly drawn to this mask when I saw it on display at a seasonal Halloween stand outside of a Sears in the local mall (this was pre-Spirit Halloween and other Halloween box stores). The detailing was incredible with the deeply grooved skin, hand-tied leather strings holding the lips together and the use of plastic eye inserts to give it a more ghastly look. I didn’t realize it until I brought the mask home but the eyes were of the googly-eye variety but they worked perfectly in this application. Add to that a faux fur backing and you have the making of a mask that not only had a ton of personality but was extremely comfortable to wear and very easy to see and breathe out of. 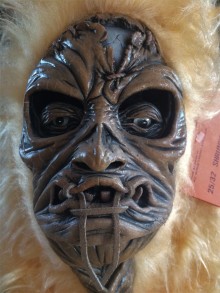 This mask was a huge hit when I wore it to hand out candy for the trick-or-treaters and the reactions cemented in my mind that scaring people was fun. It was from here that I started an annual yard haunt, featuring many Be Something Studios masks. I added such classics as the Lunar Lynx, Fang Face, Shrunken Skull and Unleashed Wickedness. All of these masks were sights to behold and got the best reactions from my visitors.

The next mask that got a huge reaction was Bone A Part. This was made up of two skull pieces, the upper skull and lower jaw, glued to a black stretchy cloth that covered your entire head. Because the latex pieces were separate, when you moved your mouth the mask’s mouth would move as well. This was quite the innovation and Be Something Studios was the first company to do this, in 1987. With this fitting so snug, your eyes were in the perfect position to create quite the illusion. 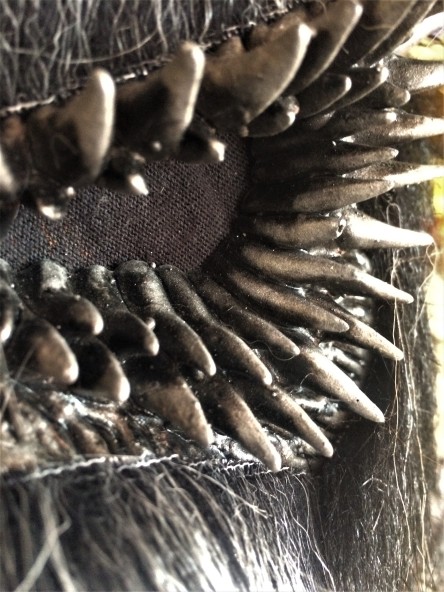 In fact, Zagone has been quite the innovator with many things in the mask industry. In 1974 they introduced half latex masks with ventilated fur fabric for hair. In 1977 came the latex half masks with a plush hood that included a Velcro strap helping to keep the mask in place while you wore it. Then in 1983 came ½ latex masks with a knit cap. These often were designed so that the wearer’s real mouth was full exposed below a fake mustache on the mask creating a great look. Next came a series of masks with attached baseball hats in 1992. In 1993 came a huge advance that featured an elastic harness that allowed for a lower latex jaw to move with your mouth. In 2010 they came out with a Supersoft line featuring soft, light weight latex that forms to the face and allows the actor to deliver a performance through the mask as if they are wearing makeup. Most recently, in 2017, they introduced a full line of UV reactive masks and costumes. Other companies had toyed with glow-in-the-dark masks in the past but never to the degree that these masks do. 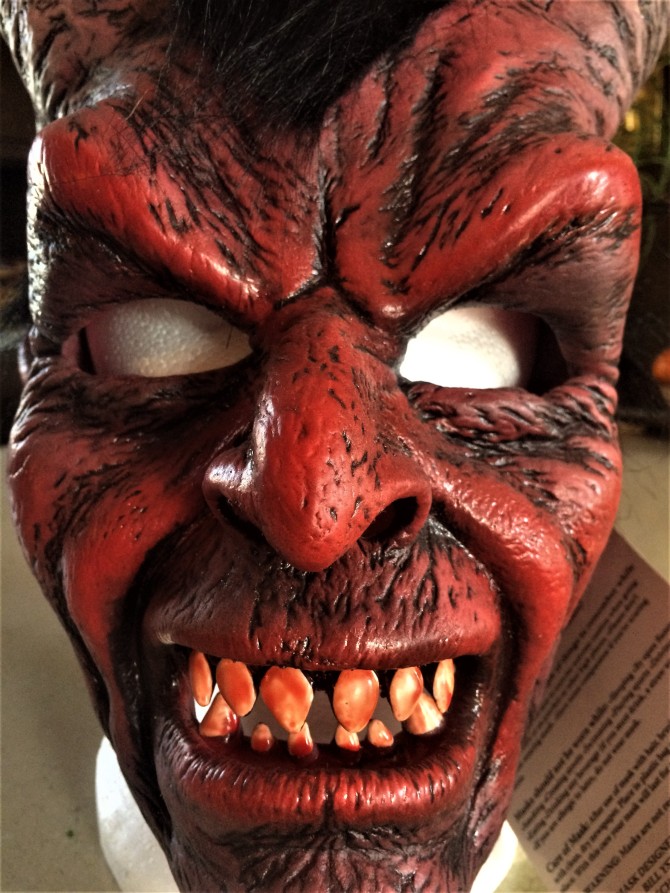 Diablo, one of the coolest Devil masks ever offered.

When I started collecting masks there were three big companies (Don Post, Distortions and Be Something Studios) and I bought masks from all three. There were two things that immediately stood out to me when comparing the actual masks I was receiving.

First off was the quality. Though all three companies seemed to use about the same thickness in latex, you rarely got what you ordered from both Don Post and Distortions. Most of the time with these two companies the mask you received looked greatly different from the ones pictured in their catalogs. This was because they would show beautifully made production copies for the catalog images and then what you got was made quickly on an assembly line. I remember times getting a mask in the mail and actually wondering if it was the same piece! This never happened with Be Something Studios. The copies I received always looked at least as good as what was shown in their catalogs.

Ghostly Visitor, another great example of a deep mouth with full teeth.

The next big difference was the use of undercuts and three dimensional teeth. On most masks, even ones with open mouths, there is not much depth and the teeth are flat with no backs. They do this because it is easier to get the mask out of the mold after it dries. Zagone went the opposite route. The mouths on many of their masks are very deep and feature teeth that are fully formed. Some companies would do this by inserting a separate latex piece featuring the teeth and gluing it in (or gluing in individual resin teeth later). Not these guys; they do it all in one piece and many collectors over the years have been scratching their heads as to how they actually pull it off! I myself wonder how often a mask is pulled out of a mold only to find that a tooth or two was left behind in the mold. 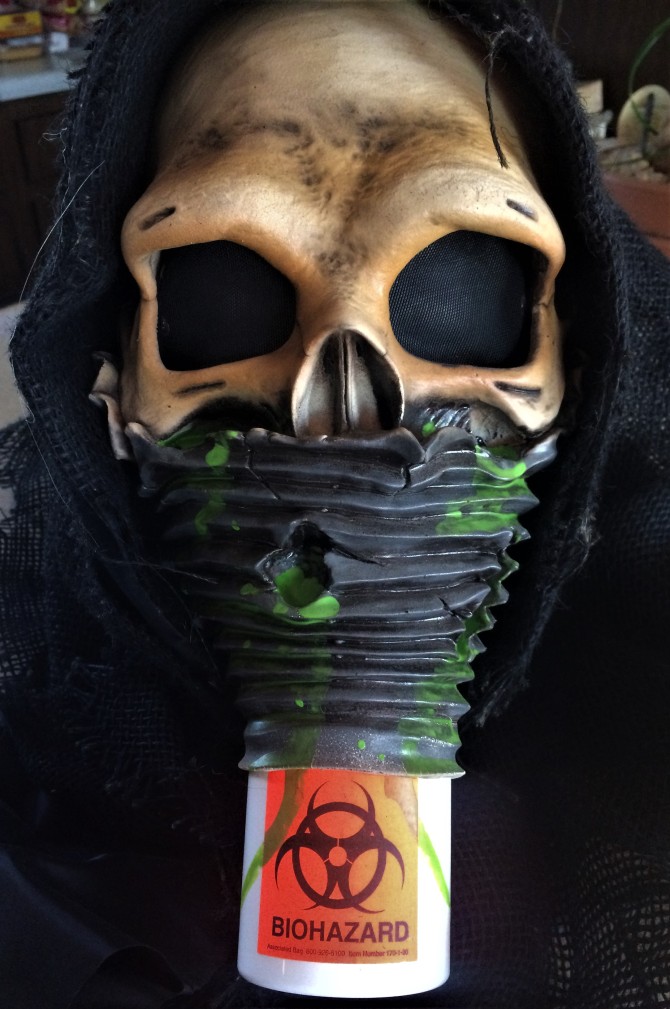 Survivor, featuring a see-thru black cloth to mask your eyes.

In 2005, Be Something Studios changed their name to Zagone Studios when Richard and Anthony Zagone took it over. Thankfully, with the name change the level of quality did not change and to this day, you can still get great quality masks at great prices. Every year they present new masks to their lineup and have started to offer some of their classics in new, deluxe re-issues. Not only does it allow you to add their new creations to your collection but if you are like me, and love nostalgia, it allows you to revisit pieces from your youth. I cannot praise Zagone Studios enough as they understand the important aspects of mask making. From reasonable prices to maintaining great quality at all times to understanding the necessity of being able to see and breathe, you will not find a better product anywhere! This is one company that you can order from and never be disappointed!