As most monster kids my age did, I spent little to no time playing sports growing up. Instead, I spent my weekends watching any and all monster movies that I could find on TV. Each Tuesday, when the new TV Guide came in for the following week, I would go through page by page making myself a list of what movies were playing, on what station and at what time. Then I would try to watch as many of them as I could, of course assuming that our TV’s UHF antenna would actually be able to draw the station in at the time the movie was airing.

END_OF_DOCUMENT_TOKEN_TO_BE_REPLACED

While on our 2015 Terror Dave road trip, we visited many things and had many discussions. On April 3rd we headed to one of the world’s largest bats in Louisville, KY (and I am not talking about the 120 foot baseball bat that stands outside of the Louisville Slugger Museum). Those that know us are aware of the fact that sports rate very low on our list of priorities so that when the Daves go to see the world’s largest bat, you can bet it is either something zoological or something scary. 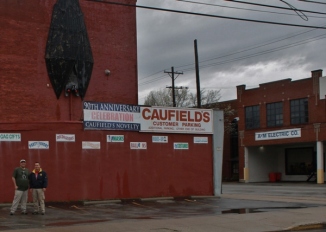 END_OF_DOCUMENT_TOKEN_TO_BE_REPLACED

My love of Halloween masks started in 1984 when I received my first mask catalog from Distortions Unlimited. I was totally blown away by the creativity of the designs, especially with the aliens. From there I received a catalog from the now defunct company House Of Horror Studios and immediately bought my first mask, Living Death. This mask was a zombie corpse and I also bought a set of matching hands. This purchase was all it took to become obsessed. 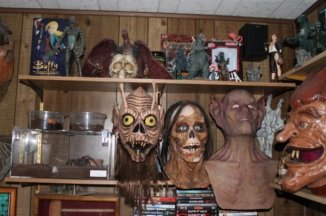 A small portion of various masks and model kits from my collection.

END_OF_DOCUMENT_TOKEN_TO_BE_REPLACED

1985 was a big year for me; not only did I graduate high school but it was also the year I became a home haunter. Halloween was always a favorite holiday of mine and one of the things I always loved when I was trick or treating were the houses that did a little bit more than just putting out a lit jack-o-lantern. I decided I was going to be that guy and like most things I do, I went all out and gave it 150%. My first year was actually small with just a rotted corpse sitting in a chair and me wearing a Be Something Studios (now Zagone Studios) Shrunken Head mask to give the kids a scare before handing them their candy. 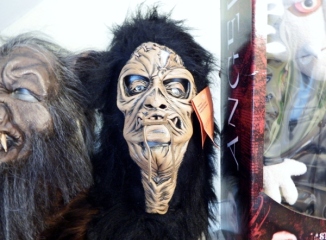 Though my original Be Something Studios Shrunken Head mask is no more, I recently bought a new copy, for nostalgia sake.

END_OF_DOCUMENT_TOKEN_TO_BE_REPLACED 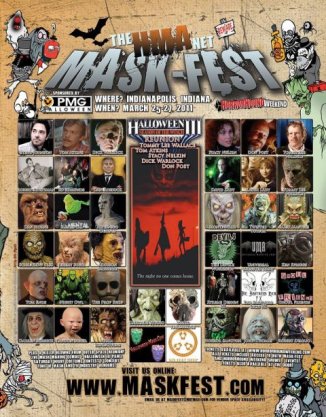 I have been a collector of Halloween masks since about 1985. At the time the 3 main companies were Distortions Unlimited, Don Post Studios and Be Something Studios (now known as Zagone Studios). Back then, before the internet, ordering out of catalogs was the norm and writing letters and making phone calls was how we were all able to keep in touch with each other. Times certainly have changed!