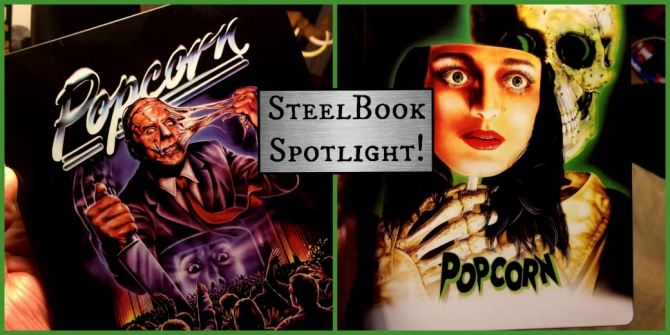 Having graduated Class of ’89, the early ‘90s heralded my transition into adulthood. Although I had a job and was attending community college, those hedonistic days were also spent partying and having drunken horror movie marathons with friends. Although we may not have had any trouble staying dry, the same couldn’t be said for our entertainment. The golden age of slashers seemed to disappear as fast as our teens with trips to the video store yielding fewer and fewer results. Needless to say, any ‘80s-style horror stragglers were a welcome sight and today’s SteelBook Spotlight is a prime example. Whether the film’s charismatic masked killer or its “movie within a movie” homage to ‘50s sci-fi films, Popcorn made for an unexpectedly fun night back in 1991. And now, nearly three decades later, it’s been given an upgrade. 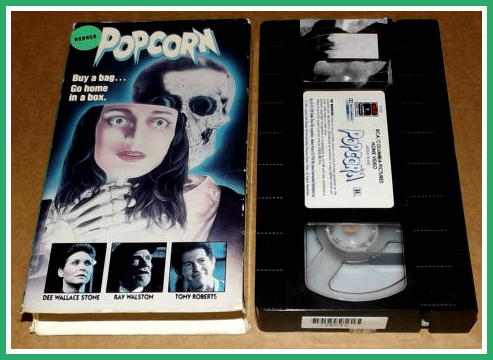 The movie was released on Blu-ray last October courtesy of Synapse Films and boasts a clearer transfer. Although this Special Edition is available on Amazon, I decided to work a little overtime and splurge on their limited edition SteelBook instead. 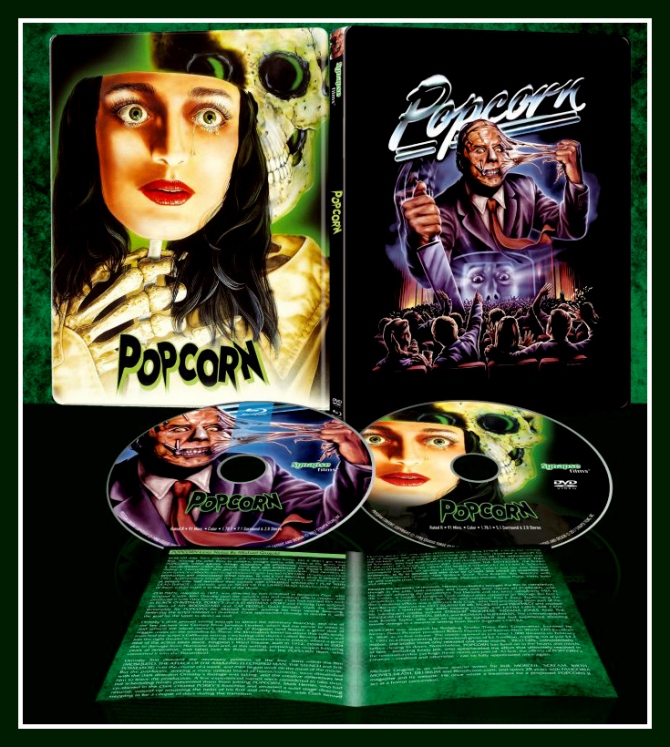 Though Steelbook Blu-rays may be pricier than their plastic cousins, they’ve somehow managed to reignite my devotion to physical media due to their attractiveness and collectibility. Aside from offering tin casings, they’re usually issued in limited quantities and feature specially commissioned artwork. Sometimes, the art is a bit too enticing.

I’ve got just about every release of my favorite Universal monster movie, Creature from the Black Lagoon be it VHS to Blu-ray box set. I swore that was it for me until I spotted the Best Buy Steelbook exclusive with Alex Ross’ stunning cover. Needless to say, that was the quickest Oath I’d ever broken. I mean, c’mon folks, just look at this beauty… 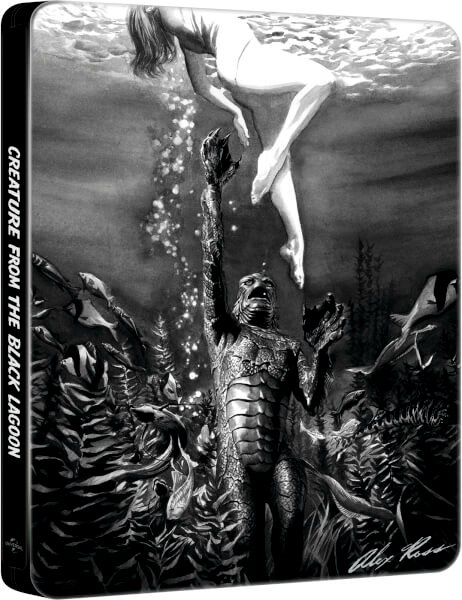 But enough about my SteelBook addiction, let’s dive back into Popcorn. The movie revolves around a group of college film students who throw together the ultimate fundraiser. For one special night, they’ll revive an old theater back to its glory days for a vintage sci-fi/horror triple feature complete with all their William Castle-style props/gimmicks. Unfortunately, the night is overshadowed by a vengeful killer who’s also a master of disguise. He’s been toying with one of the students, Maggie (Jill Schoelen), while hoping to use the event to stage her final act. 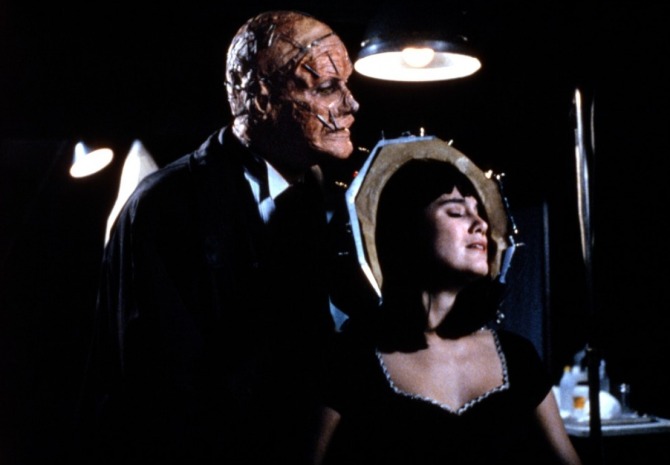 The characters are likable; never taking themselves too seriously and come across as more than just fellow classmates but a real group of pals. Since it was filmed in Jamaica, there’s a couple of reggae songs thrown in, including the memorable “Saturday Night at the Movies.” Though the movie is far from perfect (more on that later) it’s entertaining throughout and definitely worth viewing even if you aren’t willing to shell out extra money for the metal version. In that regard, I have no regrets as it’s a veritable work of art. Synapse puts out amazing SteelBooks, particularly for their Italian horror films. I currently have their releases of Demons, Demons 2, Suspiria, and Phenomena and they’re all just gorgeous. Popcorn isn’t Italian, but no less stylish. 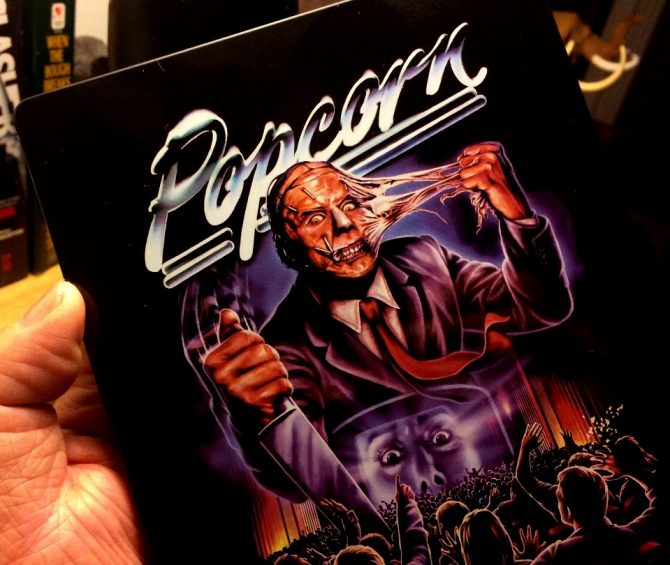 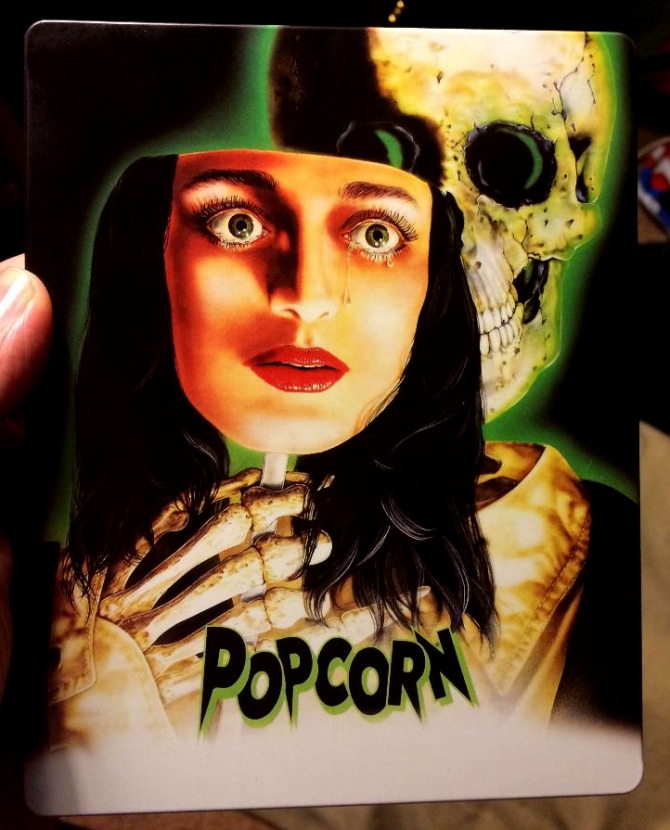 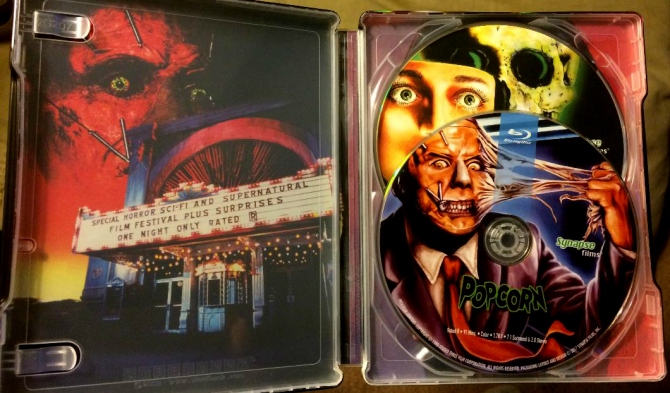 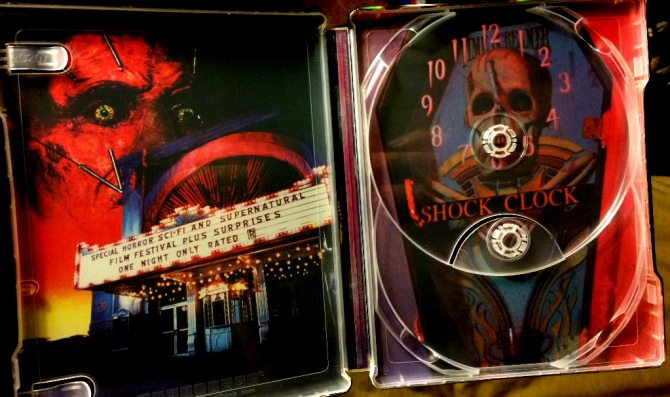 Included with this and the standard Special Edition is Midnight Madness: The Making of Popcorn – a 55-minute documentary that’s worth the price of admission in and of itself. Not only does it feature the customary cast and crew interviews but reveals just what a mess it was making this movie. Some of these tidbits include –

*The producers abruptly replacing the director and lead actress mid-production

*The cast and crew uncertain the film would ever get finished

*Controversy over the movie’s poster.he fear of one the main actors losing his job after he reveals to Herrier that he has AIDS

*The battle between Herrier and Bob Clark (director of Porky’s and A Christmas Story) who dominated the set, not unlike the Spielberg/Hooper dynamic in Poltergeist.

The film was a box office failure but has since gained cult status thanks to fans like me. Herrier says it best in the aforementioned documentary – “The movie is like wine. Difficult to make but the longer you get away from it the better it is.”