1985 was a big year for me; not only did I graduate high school but it was also the year I became a home haunter. Halloween was always a favorite holiday of mine and one of the things I always loved when I was trick or treating were the houses that did a little bit more than just putting out a lit jack-o-lantern. I decided I was going to be that guy and like most things I do, I went all out and gave it 150%. My first year was actually small with just a rotted corpse sitting in a chair and me wearing a Be Something Studios (now Zagone Studios) Shrunken Head mask to give the kids a scare before handing them their candy.

Though my original Be Something Studios Shrunken Head mask is no more, I recently bought a new copy, for nostalgia sake.

With each passing year my haunt would get larger, requiring more masks and props as well as eventually 30 people to help make it go off without a hitch. The show, known as Fright Night, only ran on Halloween night and planning would start in late March. I would script the whole thing, hand draw the flyers and figure out what I would need for new props. I would pay for everything out-of-pocket and construction would start in late summer and run right up until Halloween, oftentimes right up until opening at 5:30. I would not charge for this (though donations were accepted) and my motto was that the kids had to earn their trick or treat candy at my house; if they survived the 45 minute tour winding through my yard and house, then they could have their Snickers Bar or Twizzlers (and we always gave out full size candy bars). 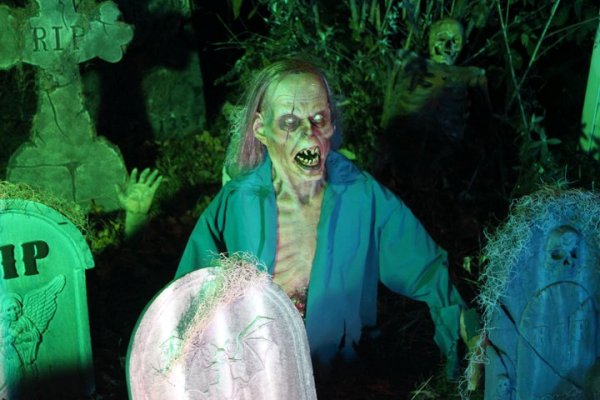 My cemetery sets came complete with zombies coming out of the ground looking for their next victim!

What ended up happening was that the show actually became too big (with over 1,500 visitors one year in one night) and so I tried, with the help of some friends, to make it a legitimate business. Unfortunately the rules change when you do this. To make money you have to pay out a lot more money. Things like permits, insurance and inspections were the new rule, and headache, of the day. On top of that it was no longer a one-night show as it was now running for most of the month of October. Doing this, as well as working a full-time job, nearly killed me (not literally). I was exhausted by the end of that month and though the response was positive, something was missing, at least for me. It was no longer fun.

Even werewolves and their children need a place to go on Halloween, here seen hanging out with Sam from the movie TRICK ‘R TREAT.

Though running the yard haunt was stressful at times, especially since I am a perfectionist and wanted everything a certain way, it was always a good time and everyone involved laughed a lot. By the end of that last October for me I had lost the energy and the inspiration and as a result, took a few years off from Halloween. Little by little I got back into the yard haunt, in a greatly reduced and more controllable presentation. It was just me now but at least the fun was back. Unfortunately, my job now keeps me very busy during the month of October since Roger Williams Park Zoo hosts the country’s largest carved pumpkin show, The Jack ‘O Lantern Spectacular. Because of my hours there I have retired, for now, from yard haunting. 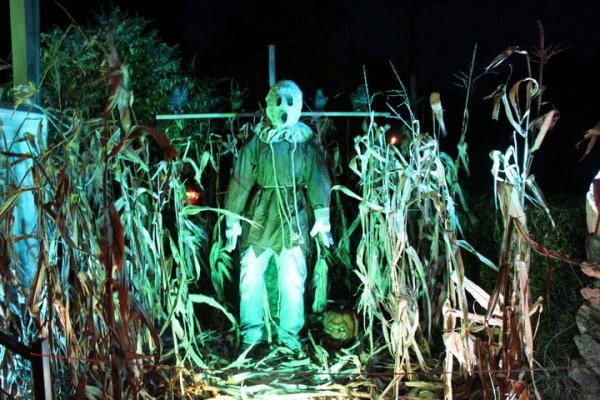 Bubba from the movie DARK NIGHT OF THE SCARECROW, a prop that looked so real that people thought is was a man in a costume that would jump out at the guests at any second!

Recently I watched a documentary on Netflix called THE AMERICAN SCREAM, an independent project that came out in 2012. It follows the exploits of three home haunters in Fairhaven, MA. All three individuals have their own take on Halloween and how home haunting should be done and though their styles are completely different, they all achieve the same goal. They all provide a safe place for kids to go on Halloween to have fun. Victor Bariteau, with whom I relate the most with, said it best when he said that Halloween is a community holiday whereas Thanksgiving and Christmas are family holidays. 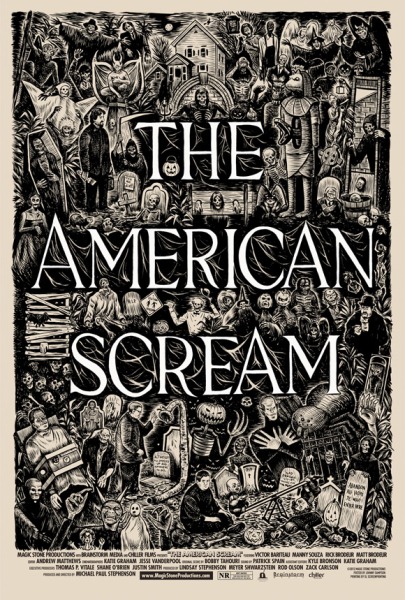 Watching Victor in action reminded me a lot of myself back when I was doing my home haunt in the 90’s. You would work a fulltime job and spend all of your free time working on your haunt, hoping that on Halloween night it doesn’t rain. Everything has to be perfect and settling for less is not an option. Mood swings are common place but in the end, when the show is in full swing, and you hear the screams of the guests, or see children being taken out crying, you know you have done a great job. Even now, so many years later, I have adults come up to me that were kids when they visited my yard haunt thanking me for such great childhood memories.

At the end of THE AMERICAN SCREAM, it looked like Victor was going to be taking his yard haunt and making it into a legitimate money-making business, called Ghoulie Manor Haunted House. Thanks to social media, Terror Dave Fuentes contacted Victor to see if we could meet with him during our recent two-week zoo tour. Victor readily agreed and we set out to the Silver City Galleria Mall in Taunton, MA. Though it was only April, Victor was in full swing getting his haunt ready for the October season.

Victor met us at the door and the first thing I picked up on was how proud he is of what he is doing. He took what was basically a dream and turned it into a business. Deprived of holidays as a child he was now over-compensating by taking Halloween to a new extreme, making it family friendly and fun. He was like a child showing off his new toy as he took us from room-to-room, explaining the set-ups and how they came to be. All I can say is that everything looked amazing and we were seeing it in a fully lit building. The attention to detail is second to none and I can’t even imagine how great it is all going to look when he opens in the fall.

As he continued the tour, memories flooded back for me of when I used to do the very same thing. I found myself really missing setting up my now meager display but found myself confident that it would return one day. Victor is an inspiration to haunters all over. What he does on a limited budget is amazing and the fact that he is self-taught in the art of prop building, and that he is making unbelievable props, is a testament to his love and dedication to the Halloween season. He even holds prop-building classes at Ghoulie Manor where people can exchange ideas and show updated techniques. He has created quite the community, one where egos are left at the door and everyone helps for the one common goal of putting on the best haunt possible year after year.

When the tour was over, Victor let us go through the whole thing again, taking our time. As we admired details that we missed the first time through, we photographed everything with Victor’s permission. What you are about to see are some of these photos. Please keep in mind that these pictures were taken with the regular building lights on so there is no kind of special effects lighting used. The good thing about this is that you can see how much detail goes into these set-ups and props. To fully appreciate what goes into this production, you should also check out THE AMERICAN SCREAM on Netflix (or better yet, buy a copy by going HERE)! Then, this fall, visit Ghoulie Manor Haunted House at 2 Galleria Mall Drive in Taunton, MA. I can guarantee that you will not be disappointed! You can also check out the official website HERE! The Daves would also like to thank Victor for taking time to meet with us!

Enter Ghoulie Manor, if you dare!!!

As soon as you enter the attention to detail is evident!

Dave hanging in the office, probably typing a future blog!

One of my favorite props!

There is no shortage of books in this library! 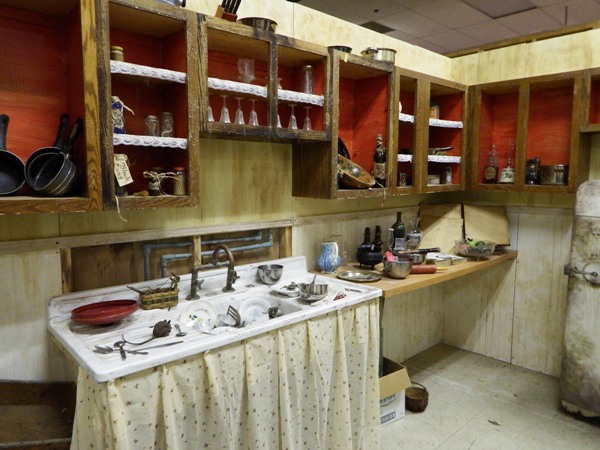 If it came from this kitchen it has to be good! 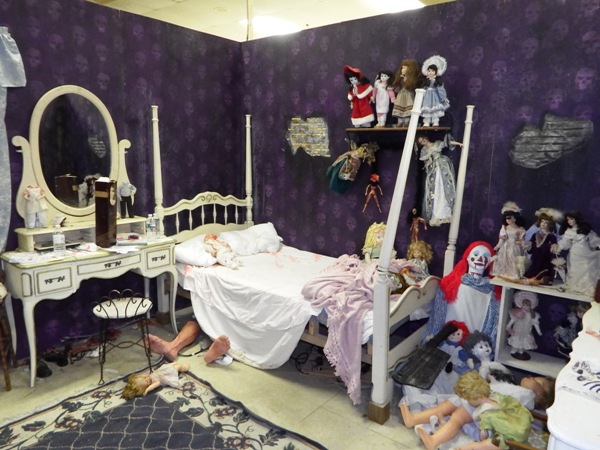 You never know what is growing in the greenhouse! 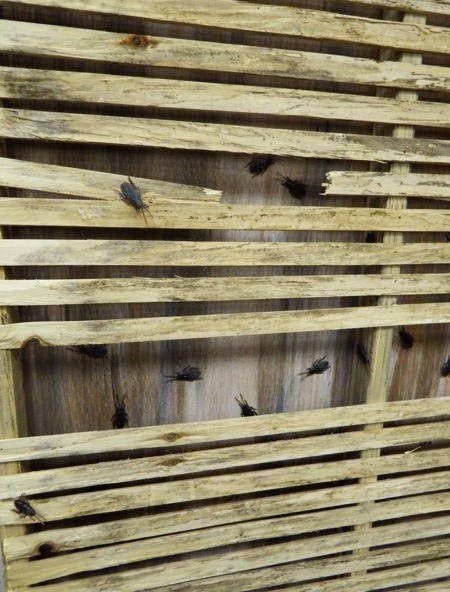 This will probably creep people out more than most of the other things here! 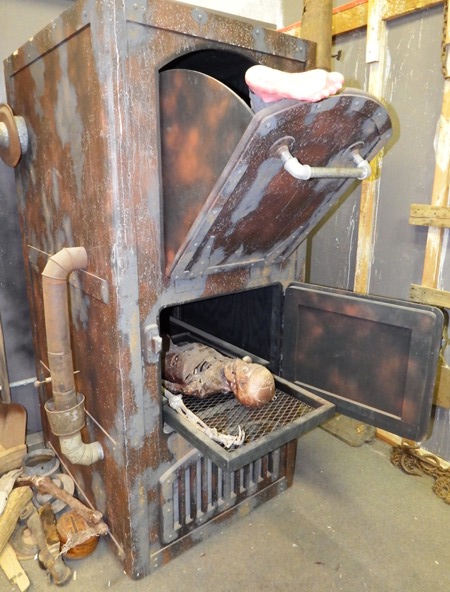 Well what do you use your furnace for?

What manor would be complete without a family crypt?

It’s pretty impressive what you can do with some foam! 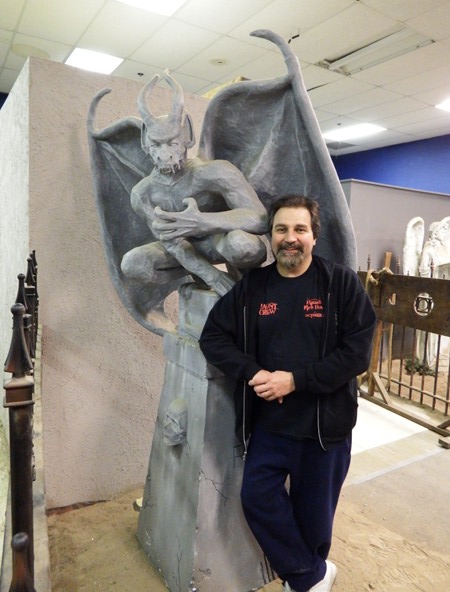 Victor posing with an amazing gargoyle prop he built from scratch!

This animatronic spider was by far my favorite part of the tour! 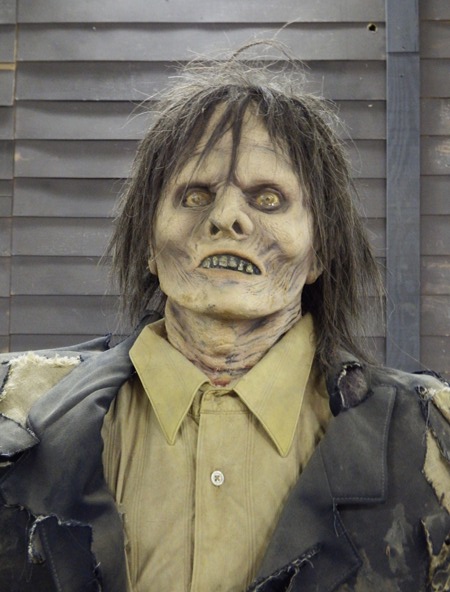 6 thoughts on “Hanging Out At Ghoulie Manor!”