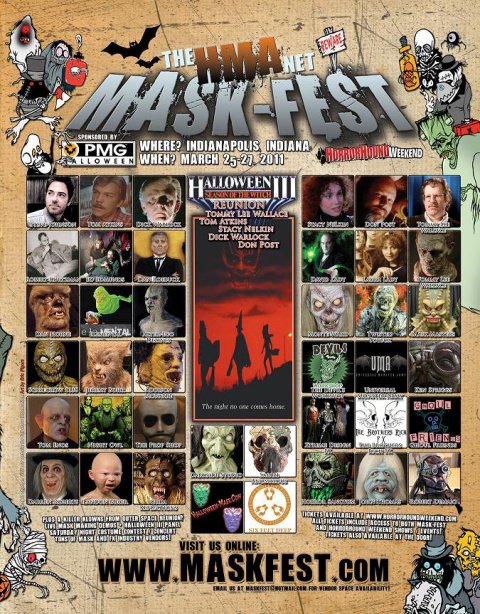 I have been a collector of Halloween masks since about 1985. At the time the 3 main companies were Distortions Unlimited, Don Post Studios and Be Something Studios (now known as Zagone Studios). Back then, before the internet, ordering out of catalogs was the norm and writing letters and making phone calls was how we were all able to keep in touch with each other. Times certainly have changed!

Distortions Unlimited, Don Post Studios and Zagone Studios are still big names in the mask collecting community but now they are joined by other companies such as Trick Or Treat Studios, Night Owl, Fearscape Studios, Horror Sanctum Studios and Darkside Studios. They all produce their own lines of amazing masks and props and now you can see their creations all in one place…MASK-FEST!

We can all thank Eric Austin for MASK-FEST, now in its 3rd year. For those of you who don’t know who he is, you should definitely know of his website, THE HALLOWEEN MASK ASSOCIATION. This forum is a must-go-to site for mask collectors. It showcases masks from the past as well as masks from today and even tomorrow! Artists can showcase their new creations and collectors can sell off their collections as well. It is one of those rare forum communities where everyone is positive, thinks the same way and is there to have fun.

MASK-FEST is at the HORRORHOUND WEEKEND March 25-27 at the Marriott Indianapolis East, 7202 East 21st Street, Indianapolis, IN. MASK-FEST is a convention that celebrates the artistry of masks, make-up, monsters and Halloween! Even if you are not a mask collector, be sure to check out MASK-FEST. If you are at HORRORHOUND then you are a fan of horror and monsters and that is what MASK-FEST is all about! You’ll be able to see many of your favorite horror creations immortalized in latex! You will witness aisle upon aisle of independent artists selling and displaying collectible masks, props, models and every other type of monstrous goody you can imagine!

In addition to the amazing mask companies and artists that will be present, MASK-FEST is also responsible for such great celebrity guests as Tom Atkins, Stacey Nelkin, Tommy Lee Wallace and Dick Warlock from HALLOWEEN III: SEASON OF THE WITCH as well as Suzanne Snyder, Grant Cramer, Harrod Blank and Mike Martinez from the cult classic film KILLER KLOWNS FROM OUTER SPACE. This will also be a great opportunity to meet Don Post Jr.,  artist Steve Johnson and Ed Edmunds, from Distortions Unlimited. This is going to be my first mask convention and I can’t wait! See a full report on the event soon!

One thought on “A Mask Collector’s Dream Come True…HMA’s MASK-FEST 2011!”