Zombies have been undergoing a renaissance lately, much like vampires and werewolves have over the past 20 years or so. This past year there were two films that show the huge range of storylines now being told – the romantic comedy “Warm Bodies”, and the fast-zombie invasion “World War Z”.  To continue keeping the genre fresh, new ways of telling the same basic story need to be found.

Strawdog Theatre is presenting a different take on the zombie with “Pontypool”, a play adapted by Tony Burgess from his book Pontypool Changes Everything. Burgess originally adapted his book as a screenplay for the 2008 film “Pontypool”, directed by Bruce McDonald. I attended the January 11, 2014 performance with Terror Dave Fuentes.

END_OF_DOCUMENT_TOKEN_TO_BE_REPLACED

H.P. Lovecraft’s The Shadow Over Innsmouth 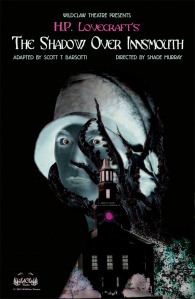 H.P. Lovecraft’s Cthulhu and the Deep Ones have become mainstream in today’s culture. A great example is the mash up of Thomas Kinkade paintings with Cthulhu (check one out here).

END_OF_DOCUMENT_TOKEN_TO_BE_REPLACED

Not long after I became familiar with Chicago’s Wildclaw Theater, I’d been told that their annual December Deathscribe event was not to be missed! While horror isn’t something most folks gravitate towards this time of year (unless, of course, you count holiday shopping), leave it to this talented crew to toss conventional wisdom out the door and host one of the most unique, terror-filled evenings imaginable!

END_OF_DOCUMENT_TOKEN_TO_BE_REPLACED

The creepy crew of Scarevania’s Freakhouse Flicks  made their live stage debut July 21st at  The White Rabbit Cabaret in Indianapolis, IN. As the patrons made their way to their seats they were greeted by a stage scene depicting the inside of a “10 in 1” sideshow tent. As the house lights went down, the evening was kicked off by carnival talker (and leader of the Freakhouse Flicks gang) Francis D. Pickles!