H.P. Lovecraft’s The Shadow Over Innsmouth

H.P. Lovecraft’s Cthulhu and the Deep Ones have become mainstream in today’s culture. A great example is the mash up of Thomas Kinkade paintings with Cthulhu (check one out here).

In one of my many incarnations I am a board gamer (Eurogames and the like), and I’ve played both Arkham Horror and The Miskatonic School for Girls. 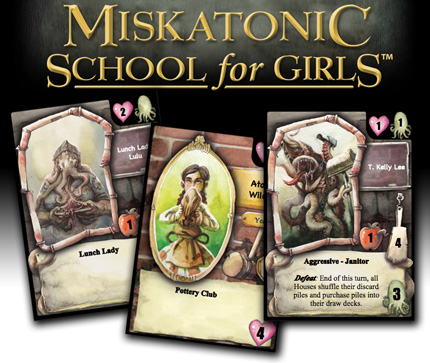 Despite this saturation of the Cthulhu mythos around us, I’ve never actually read an H.P. Lovecraft story – until now.

On Friday, Dec. 13, 2013, I attended the second performance of Wildclaw Theatre’s “The Shadow Over Innsmouth”, adapted from the H.P. Lovecraft short story of the same name.

I have seen 3 other performances by Wildclaw Theatre. In 2012 I saw their play “The Life of Death”, adapted from a Clive Barker story. I attended Deathscribe 2012 and Deathscribe 2013 – performances where they stage 5 ten-minute radio plays, interspersed with music and funny ads. They specialize in bringing horror to the stage.

The play begins when Oberlin College student Regina Olmstead (Brittany Burch) arrives in Newbury Point, Massachusetts, looking for transportation to Arkham, a nearby town. She is doing a thesis on urban decay and is visiting the area because it is full of older towns that have gone to seed. She has family connections in Arkham (an uncle and a cousin) and is planning on staying with them.

The Newbury Point natives warn her about Innsmouth, a nearby town through which she will travel. The person she is talking to, Howard Barnes (Mark Pracht), has never been to Innsmouth but he hates the residents anyway. The claque of townies that are milling about spout insults about the people from Innsmouth, spitting on the ground.

While deciding what to do, Regina visits the local historical society, staffed by Annie Tilton (Christy Arington). Annie shows her some jewelry made from “weird gold” and plates with designs featuring strange aquatic creatures, all originating from Innsmouth. She tells Regina some of the strange stories about Innsmouth. When Regina touches one of the jewelry pieces she hears voices. Regina has become intrigued by Innsmouth and decides to visit the town despite all the warnings.

The bus driver, Joe Sargent (Jude Roche), gives us our first good look at an Innsmouth resident. They were described as “not right”, and he is definitely not right – bald, greyish skin, growths on his head, and what will become all too familiar, a persistent wet coughing and hacking. Regina steels herself and gets on the bus. On that ride we find out that she has an unspecified lung condition for which she inhales an unknown drug she applies to a cloth. When she takes a long sniff of the drug, she goes into a trance-like state. Several times during the play she has visions when she’s in the trance.

When she arrives in Innsmouth she meets several more inhabitants, all suffering the same abnormalities as Joe Sargent. The town is full of old buildings that are now empty and boarded up. She meets the only “normal” person in the town – Samuel (Matt Farabee), the shopkeeper in the general store. He tells her more information, including the rumors of tunnels under the town.

Regina continues to explore the strange history of Innsmouth, and we follow her as she spirals further down into the madness that permeates the strange, fishy-smelling Massachusetts town.

Horror stories have to walk a fine line when revealing information. Once you reveal the “monster” of a story, you lose a lot of the tension and fear the audience is feeling. The scary, incomprehensible unknown of the imagination becomes the fixed, identifiable known of a physical creature.

On film you can rely on CGI and other elaborate special effects and sets to ratchet up the tension and create the scariest, bloodiest monster you can. This is much harder on a live stage. Plays are primarily a verbal medium, and seeing an extra in a monster costume, no matter how elaborate, is not going to have the same effect. The story – and the telling of it – become more important than any final reveal of a monster.

“The Shadow Over Innsmouth” did a superb job of this. The entire story is told from the main character’s viewpoint – we see nothing that she doesn’t see as well. The stories she hears of Innsmouth gradually become more sinister. Her initial conversations with the Newbury Point people are rather cursory. They hated the Innsmouth residents, but it was mainly because they looked weird and seemed diseased. Once she arrived in Innsmouth and came into contact with the residents, the stories become more detailed and frightening.

As is typical in most small productions, the stagehands were visible as the set was adjusted. However, this added to the disorientation Regina felt because these cloaked figures were also either townsfolk who had become too revolting to be seen, or they were otherworldly creatures intent on harm.

The playwright did make some major changes from the original story – the female main character being the biggest change. Lovecraft’s narrator (the original story is a first person narrative) is a man. I didn’t realize this change had been made until after the play was over, when Terror Dave Fuentes told me about it. I’m so used to the American paradigm of female main characters in horror stories that it didn’t faze me at all that the hero of the play was a woman.

The makeup and costuming did a great job of making the townsfolk repellent. Strange growths on their faces, grey, waxy skin, and distorted posture help sell the idea that these were a cursed people. I think their continual coughing and hacking induced at least some audience members into sympathy coughing themselves!

The cast was uniformly excellent. Brittany Burch as Regina had the unenviable distinction of being in every scene. She had to portray both her character’s horror and fascination with what was going on around her. Brian Amidei as Zadok Allen, the Innsmouth town drunk and storyteller, had an incredibly long monologue in Act 2 telling the history of the town back to an oft-mentioned plague of 1846. It was an amazing feat of memory!

On our drive home Terror Dave Fuentes and I continued to discuss the play.  I said that I wish I could transport back to the mindset of the original readers of Lovecraft’s stories. How must it have felt to read such stories in a society that isn’t saturated with horror and monsters in every conceivable media?

We both felt that the ending of the play was inevitable, but I think that is because today we are so used to horror movies and their tropes. Another change from the original story the playwright made was taking the story’s ending and sprinkling its ideas throughout the play. He used the conceit of the drug-induced trances to hint at what was to come. Unfortunately, this led to us figuring out where we were going before the end.

On the other hand, if the ending had come up with no prior hints, we probably would have been upset that the ending came out of nowhere!

Despite the inevitability of the ending, I thoroughly enjoyed this play and can recommend it wholeheartedly. There is no gore – except for one gutted fish.

It is a cerebral horror story and a fine introduction to the Lovecraft mythos. I’m looking forward to reading more of his stories – and hopefully seeing more adaptations for the stage.

This weekend the code word “fishfrog” will get you $10 off your ticket.