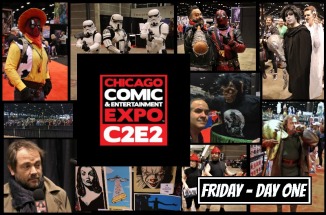 Friday, April 6, 2018, 10:15am – My daughters, Leia and Jade, and I arrive at McCormick Place just after the Chicago Comic & Entertainment Expo (C2E2) begins. This year they had security checkpoints set up like the ones they have at airports which created some delay. While approaching the metal detectors, I notice a Wonder Woman cosplayer in front of me holding a sword and a guy behind me with a laser gun. I swear this is the only Security Screen in history where folks walk in proudly brandishing weapons!

END_OF_DOCUMENT_TOKEN_TO_BE_REPLACED 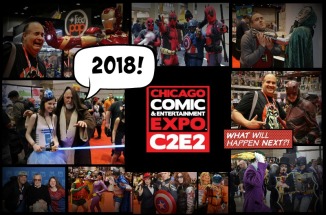 C2E2 (Chicago Comics Entertainment Expo) reminds me of how Christmas felt back when I was a kid (and Halloween is now). You start preparing a full month in advance as the excitement builds to the big day. Or, in this case, a full weekend.  This year I’ll be attending all three days which is a first for me. As usual,  covering national horror host, Svengoolie, remains priority #1 and he’ll be there an extra day as well – signing autographs on Friday afternoon in addition to Saturday. Another C2E2 first is his participation in a “Svengoolie Spotlight” panel Saturday too. Sven and his Producer, Jim Roche, are graciously allowing me to hang with the crew at this event as with past years. I’m far from worthy but truly appreciate it.

END_OF_DOCUMENT_TOKEN_TO_BE_REPLACED 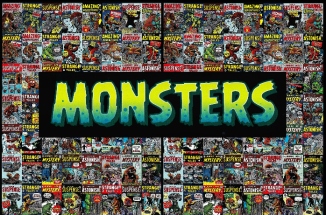 Ever since I was a kid, I’ve been an avid fan of Marvel Comics. Though I didn’t mind watching the DC “Super Friends” on Saturday mornings nor seeing Linda Carter twirl into “Wonder Woman” via prime time, I was completely “brand loyal” to Marvel when it came to print. I collected all the Spider-man, X-Men, and Avengers titles but particularly loved the more obscure ROM: Spaceknight which I discussed years ago here and, more recently, in Scary Monsters Magazine. Aside from being a throwback to vintage sci-fi films, ROM regularly featured something the other titles didn’t: namely, giant monsters! And if there’s one thing this overgrown kid loves more than just about anything, it’s a decent monster. Years before Marvel would revolutionize the world of super heroes, they were a very different company. In fact, many of their titles resembled the works of another favored brand of mine, EC Comics. “Tales to Astonish,” “Journey into Mystery,” and “Strange Tales” would not only see the first appearance of several popular, modern day superheroes such as Ant-Man, but also a slew of amazing monsters created by such titans in the industry as Stan Lee, Larry Lieber, and Jack Kirby. Sadly, by the time I was born, these comics were long gone but, thanks to two amazing books, I can finally enjoy them without spending an arm and a leg in the secondary market. Earlier this year, Marvel released MONSTERS Volumes 1 & 2 which has not only brightened up my Omnibus collection but puts a big smile on my face every time I open one.

END_OF_DOCUMENT_TOKEN_TO_BE_REPLACED 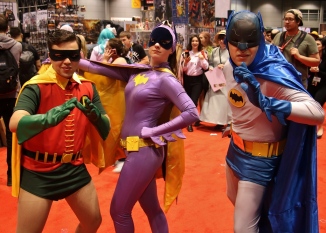 Our coverage of the 2017 Chicago Comics & Entertainment Expo (C2E2) concludes with one of my favorite aspects it – the fans themselves! And now, without further adieu…

END_OF_DOCUMENT_TOKEN_TO_BE_REPLACED 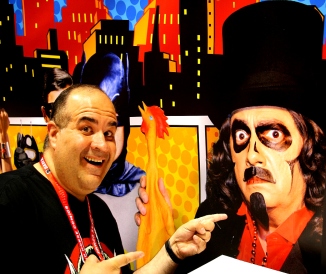 As soon as I arrived for Day Two of the Chicago Comics & Entertainment Expo (C2E2), I made a mad dash to the autograph section while dodging hundreds of attendees. National MeTV horror host, Svengoolie, was signing at Table #25 and, per his producer/assistant Jim Roche, I was to meet the crew just prior to his 11 am appearance. Seconds after reaching the spot, I got swept up by the host’s television crew who’d been right behind me. For the last five years, I’ve been one of the luckiest Svengoolie fans around. Despite his growing popularity and adding a bevy of celebrity admirers to his fan base each year, he and his talented team have always been very gracious to us Daves and allowing close access to many of his key appearances. I get to play Jimmy Olsen to his Superman while offering some assistance whenever needed. C2E2 is one of those “all hands on deck” type of events where this often comes into play. Svengoolie always commands a huge line of fans but, at this convention, it would continuously grow the entire weekend if given the chance. While his Director, Chris Faulkner, and assistant director, Kevin Reisberg, are out gathering footage for the show, Jim has the arduous task of maintaining the crowd without being distracted. So it’s the perfect trade-off, I offer an extra set of hands and, in turn, get front row coverage of the host. It probably also helps that I’m built like a bar bouncer and can offer an air of “protection” should things get rowdy though, thankfully, that’s never happened at any of the Svengoolie appearances I’ve ever attended (and, for the record, this one was #76).

END_OF_DOCUMENT_TOKEN_TO_BE_REPLACED 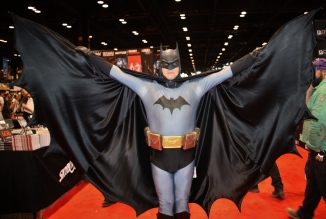 My family and I can literally feel the energy of the Chicago Comics & Entertainment Expo (C2E2) for a full month before it finally begins. The annual event sees fans from virtually all walks of geek-dom gather (and fill) the city’s enormous McCormick Place to celebrate their varying interests. Whether that may be STAR WARS, Dr. WHO, superheroes, Anime, horror, science fiction, Godzilla (or in my case, pretty much “all of the above”) you’re guaranteed to love this event! We’ve been attending for the last several years and each one is more enjoyable than the one before with 2017 no exception.