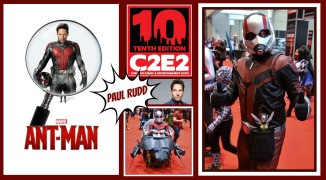 Who doesn’t love Paul Rudd? The seemingly ageless actor has been inspiring laughter for nearly two decades; long before joining the Avengers as Ant-Man. My family and I try meeting as many  MARVEL stars as we can so when C2E2 (Chicago Comics & Entertainment Expo) announced Rudd as one of their featured guests it was one happy day at the Fuentes household. I immediately started working the necessary overtime while hovering over their website waiting for the tickets to go on sale. My diligence paid off and I bought ours (both photo op and autograph) just before they completely sold out. C2E2 would eventually add an additional day and I believe those were gobbled up as well. Was it worth paying more than a car payment to meet Paul Rudd?

END_OF_DOCUMENT_TOKEN_TO_BE_REPLACED

It was Friday afternoon when MeTV’s horror host sensation, Svengoolie, arrived at the Chicago Comic and Entertainment Expo (C2E2). As soon as I was alerted of this by his Producer, Jim Roche, I rushed outside to meet them. It’s rather surreal seeing Svengoolie in broad daylight but there he was; patiently waiting as Jim and his Director/cameraman, Chris Faulkner, prepared their supplies and equipment. C2E2 is always a frenetic experience for the crew and this year they were adding merchandise sales to the mix (T-shirts and posters). I’ve had a bit of experience selling Svengoolie shirts at past appearances such as Flashback Weekend and Nightmare on Chicago Street but this would be a lot more demanding. Consequently, I’d be “knighted” as temporary paid staff for his Friday signing. With Svengoolie armaments in tow, it was time to kick-off his two-day appearance at C2E2.

END_OF_DOCUMENT_TOKEN_TO_BE_REPLACED

What a time for comic book fans to be alive! Just this past week, the female-driven Captain Marvel joined the billion-dollar club while SHAZAM (the original “Captain Marvel”) hit theaters in his own fabulous film. In other news, Netflix’s binge-worthy “Umbrella Academy” got renewed for a second season while the creepy, yet original Joker trailer also dropped. Perhaps the biggest news in nerdom was how presale tickets for the much-anticipated Avengers: Endgame managed to shut down movie sites unable to keep up with demand. So whenever you hear someone mention the phrase “superhero fatigue,” don’t say anything. Just casually walk away…and laugh.  END_OF_DOCUMENT_TOKEN_TO_BE_REPLACED

While traveling to Horrorhound Weekend/MASK-Fest convention in Indianapolis, my friend, Jason Schoolcraft, and I decided to stop in Elkhart.  This little detour inspired by a unique museum an old comic book geek like myself couldn’t resist. Even the building is modeled after the “Hall of Justice” I grew up watching on the Super Friends cartoon. Although I grew up a Marvel Comics loyalist when it came to print, I did enjoy the DC heroes on TV and film. Now that comic book heroes, especially Marvel, has punched their way into mainstream, my devotion has changed from hiking two miles to the nearest drug store hoping the next issue of “Secret Wars” was out, to reading all my favorite comic stories in hardcover Omnibus collections while gazing at the MCU movie posters in my living room. I don’t know about Jason, but there was no way I was going to pass up the chance of visiting the Hall of Heroes a.k.a. the world’s only known superhero museum.

END_OF_DOCUMENT_TOKEN_TO_BE_REPLACED

The following Q&A is from The Daredevil You Know: Spotlight on Charlie Cox panel at Chicago Comic Entertainment Expo (C2E2) on Sunday, April 8, 2018. My original intention was to squeeze this into my final post of the series last Thursday but, even after skimming off the less interesting stuff, felt it warranted its own. The panel was hosted by Clare Kramer a.k.a. Glory from Buffy the Vampire Slayer and ran an hour. The auditorium was huge and the panel photos here were all taken by me – thanks to a great telephoto lens. I have to say that so far as celebrity panels go, Cox was one actor who’s really in tune with his character. He not only provided interesting behind the scenes tidbits (at least as far as what Marvel allows) as well as insights on Daredevil, himself. But don’t take my word for it, read for yourself… END_OF_DOCUMENT_TOKEN_TO_BE_REPLACED

9:45 am – I arrive at the Chicago Comic and Entertainment Expo (C2E2) with my two youngest kids, Jade and Luke. Luke is taking my older daughter, Leia’s, spot today and this is the first time he’s been to a C2E2 in six years. What inspired his decision to join us today? Well, that would be Charlie Cox a.k.a. Daredevil of course! The star of the Netflix series only appeared Sunday and we were determined to get the most out of it – pre-paying for autograph tickets as well as his photo op. As I mentioned in my C2E2 Friday post, you gotta knock the autographs out of the way first thing, and ours was scheduled for the earliest group.