It was Friday afternoon when MeTV’s horror host sensation, Svengoolie, arrived at the Chicago Comic and Entertainment Expo (C2E2). As soon as I was alerted of this by his Producer, Jim Roche, I rushed outside to meet them. It’s rather surreal seeing Svengoolie in broad daylight but there he was; patiently waiting as Jim and his Director/cameraman, Chris Faulkner, prepared their supplies and equipment. C2E2 is always a frenetic experience for the crew and this year they were adding merchandise sales to the mix (T-shirts and posters). I’ve had a bit of experience selling Svengoolie shirts at past appearances such as Flashback Weekend and Nightmare on Chicago Street but this would be a lot more demanding. Consequently, I’d be “knighted” as temporary paid staff for his Friday signing. With Svengoolie armaments in tow, it was time to kick-off his two-day appearance at C2E2.

The security check/badge pickup was a breeze since the McCormick Place staff members were obvious Svengoolie fans. Other than having to wait for them all to take selfies with him, there were no delays. Unfortunately, Sven’s popularity made navigating the convention hall tricky with random fans constantly trying to stop him for photos. Sometimes he’d acquiesce but, in lieu of the event’s stringent autograph schedule, more often than not Jim would have to step in and redirect the eager fan his official meeting spot.

It was a relief finally getting behind the autograph curtains and away from public view. The wide open area was highlighted by a makeshift green room and round tables with marketing materials strewn about. Inside the green room were refreshments and additional tables for celebrities to relax in private. Photography was forbidden here; something that was driven home to us by an older woman with short hair. “I’m told if anyone tries to take videos or photos here, I have permission to tackle them,” she said half-jokingly while looking at Chris and his MeTV shoulder camera. She was assured they understood before a second crew member approached. He was a younger man with long hair tied in the back that went past his butt. In many ways, he reminded me of a business class “Jesus,” complete with glasses.

His attention wasn’t on Chris but rather me. “Back here we allow green professional badges only and not the press badge this gentleman is wearing,” he said. I hate when people talk about you like you’re not even there. I suddenly felt like Chewbacca in that scene where Han and Luke are trying to break into the Death Star detention block. I half expected him to ask, “Where are you taking this…thing?”

Jim pulled out an extra professional badge he had for another crew member, Chas, who’d be joining them the next day. As soon as I swapped mine for his, “Jesus” became content and wandered elsewhere. I’d encounter him again the following day, but that’s a different story.

Svengoolie and I took a seat at one of round tables while Jim and Chris went inside the green room scoping out potential interviews. They’d return without luck though, moments later, Paul Rudd a.k.a. Ant-Man strolled in. It was so surreal seeing him in person. I mean, an actual Avenger! It took everything in my power not to go total fanboy…even at the risk of being tackled by that woman and knocked over the head by Jesus.

Instead, I took a few deep breaths and contained myself. The last thing I wanted to do was embarrass the Sven team – especially since I was getting paid and Jim could officially go off on me. Besides, I had tickets to see Rudd Saturday and could hold my enthusiasm till then. Jim went back into the green room to see how approachable he was. In the years I’ve had the honor of seeing other celebrities while hanging with Svengoolie, some are a lot more congenial than others. I should mention that one of Paul Rudd’s Ant-Man co-stars, David Dastmalchian, is a huge Svengoolie fan and even appeared on the show.

Once inside, Jim recounted how he stood with Rudd at the snack table and they both were confused by a bowl of Sudafed (sinus medication) sitting next to the cookies. “Worst buffet ever,” joked Jim, using his Simpson’s “Comic Book Guy” voice, which cracked Rudd up. Now that it was established he was approachable, it was just a matter of timing and maneuvering to see if he’d had an official meetup with Sven.

Time, however, was something we didn’t have. As is the case every year, Svengoolie’s C2E2 autograph line was as at full capacity and eventually had to be cut. My job came into play almost as soon as Jim put up the merchandise sign and the orders began flooding in. Unlike other events such as Flashback Weekend or Nightmare on Chicago Street, I didn’t have a table to sit at but would have to stay mobile the entire time. I’d approach the line and get about five feet before multiple fans would flag me over. Then I’d run back behind Svengoolie and grab however many posters or shirts I’d need. The orders kept coming and the time flew by.

Svengoolie promptly began signing at his scheduled time, as the fans eagerly approached! 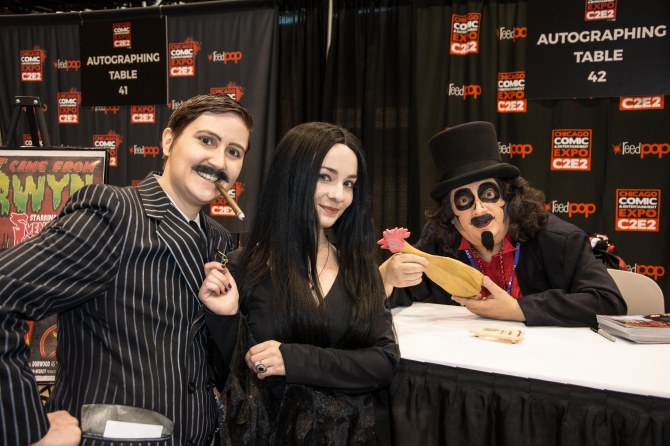 One fan was dressed as Uatu a.ka. “The Watcher” in MARVEL comics. I mention him only because he’s an obscure character and the guy about fell on the floor when Svengoolie recognized who he was. This is something I don’t think a lot of the newer Svengoolie fans realize, he’s a big fan of comic books and has a collection many of us would die for. Sven encouraged the guy to put his homemade mask on for a photo which he agreed. “Okay, he said, “but I can’t actually see out of it.” Without skipping a beat, Svengoolie replies. ‘Well, how can you be a Watcher if you can’t even see?” It was pretty darn funny.

Svengoolie and “The Watcher!”

As I headed further back towards the end of the line,  I noticed a familiar face. It was that nice lady who’s become a regular at Svengoolie appearances and I mentioned in my story at the Elmhurst Animal Hospital. She was the one that wrote that nice poem and read it aloud to him. Today, she looked like the Little Matchgirl staring forlorn at the Svengoolie line that had just been cut before her arrival. Thankfully, Jim came to her rescue. I have to say, I’ve observed Jim quite a bit in my Sven-chasing years and am always impressed by how easily he morphs from the tough guy mentioned earlier to a quick-witted comedian in perfect sync with the Emmy Award-winning Rich Koz, to the understanding soothsayer whenever the situation dictates. As someone nearing his 100th appearance, I feel I’m more than qualified to say that Roche is the heart of the “Live” Svengoolie experience as proven in this situation. Jim assured her that she’d be able to see Sven which put a big smile on her face. When she finally made it to the host, she reached into her bag and pulled out her latest labor of love, a Svengoolie doll made of yarn.

By the time the signing ended, they’d sold plenty of merch as Jim made a mental note of what he should bring back the following day. They’d have extra manpower for that one and would not require my assistance though I had every intention of being there. Unfortunately, that didn’t on account of Paul Rudd’s autograph & photo op lines (to be covered in my next post).

Saturday evening was highlighted by a special 40th Anniversary of Svengoolie Q&A hosted by SCYFY Wire. Jim graciously allowed me to share his photos of that occasion. 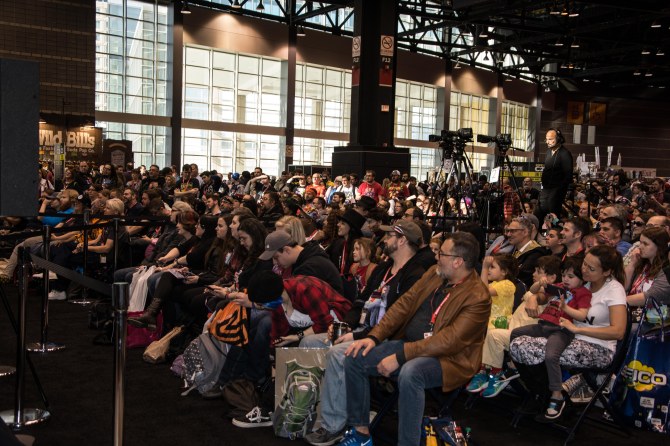 I was unable to attend but the good news is that I was able to catch the whole thing on YouTube which you may do as well!

My Saturday would be dominated by a different celebrity. At long last, I’d get to meet an Avenger!

One thought on “Svengoolie and the Superheroes at C2E2!”