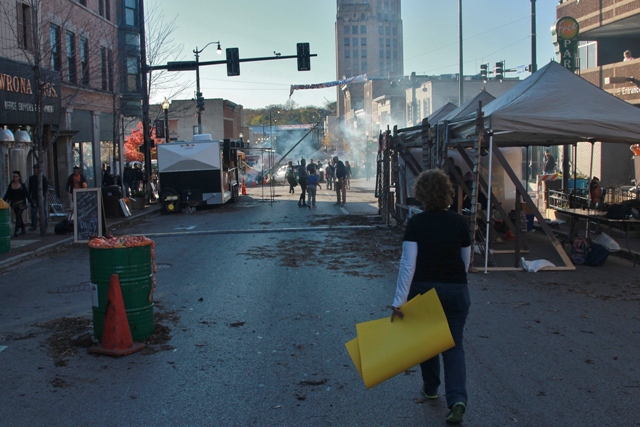 Hey gang, I hope everyone enjoyed their holidays and are looking forward to another year of horror, science fiction, super heroes, and monsters! I’m gonna kick off 2015  with a series of posts on an event that took place during the last Halloween season. Okay I know that isn’t very “New Year-ish”but I felt this story deserved to be looked at carefully and required some time that my Christmas (or Krampus had I been a local here in Elgin) season just didn’t allow. So let’s enjoy these ‘dead of winter’ days (with Dead being the operative word) and discuss an occasion that, while always amazing, is unique each year. Just curl up and forget those sub-zero temps that are plaguing a good portion of the US right now and go back to a much warmer evening WAY back in 2014.

As the sun sets over the town of Elgin, Illinois the streets come alive with costumed characters, the aroma of fried foods, and the sound of rock n roll. I walk down one of six city streets designated this year as a zombie “Safe Zone” while staring at a row of booths featuring local artisans selling their handiwork; mostly the kind of stuff that would alarm your average craft show patron. Here it’s just the opposite as one of my passersby’s (an attractive woman dressed as The Black Widow from The Avengers) admires a skull necklace while sipping a martini that appears to have an eyeball floating in it. Cars are overturned, military troops are marching on patrol, but everyone be they alive or dead is having a great time at the Nightmare on Chicago Street! 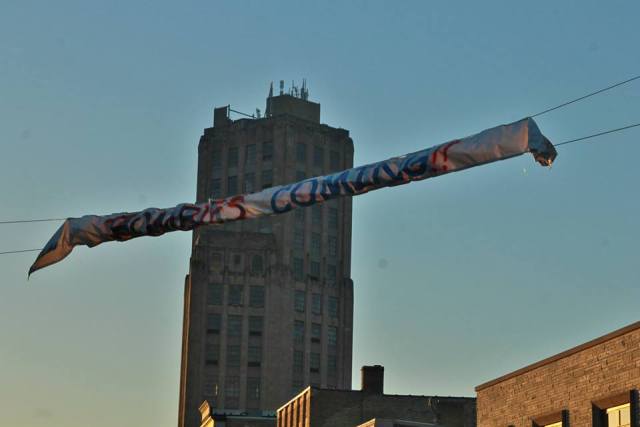 This is the fourth year that the City has hosted this total immersion event and the third time I’ve had the honor of attending. Truthfully, this is one affair that mere words can’t adequately describe and something one really needs to experience first hand in order to fully appreciate. My goal with this series (along with a much more detailed article slated for an upcoming issue of Scary Monsters Magazine ) can at least give you an “idea” of how amazing it was while hopefully inspiring you to venture out for this year’s.

Unlike the past two I’ve attended, one of the volunteer organizers, Elizabeth Haney, asked that I show up a few hours earlier (i.e. daylight) so I could capture photos of it all coming together. I was also there to try and catch things that most of the workers kept missing because they were doing there jobs so customers could enjoy them. I also assisted Haney and her friend, and fellow organizer, Alice Moring. Moring is in charge of the event’s social media so this is probably a great time to tell you to “Like” them on Facebook by going HERE.

I’m using the word “assisted” quite loosely here as these gals were constantly on the move and neither one afraid of heavy lifting. Case in point; when we passed Svengoolie headquarters (more on his role in an upcoming post) and noticed one of the high-hanging “Uncle Sven Wants You” signs were crooked, Alice didn’t hesitate to summon a ladder and climb up to hammer it back in place, herself.

Eventually we separated and Elizabeth and I walked along the streets while passing out Z.D.I. (Zombie Defense Initiative) posters to all the local businesses who were staying open and in on the festivities. Our swag was met with mixed emotions as some shop owners weren’t eager to have a bright yellow poster blocking their wares on an evening when ten thousand plus potential customers were strolling by. Though employed by Acme Design, Haney is an active and respected part of this community and the ideal person in handling these matters.

There were no problems when it came to our next job; passing out water and soda…other than trying to maneuver a wheelchair loaded with the beverages over city curbs. 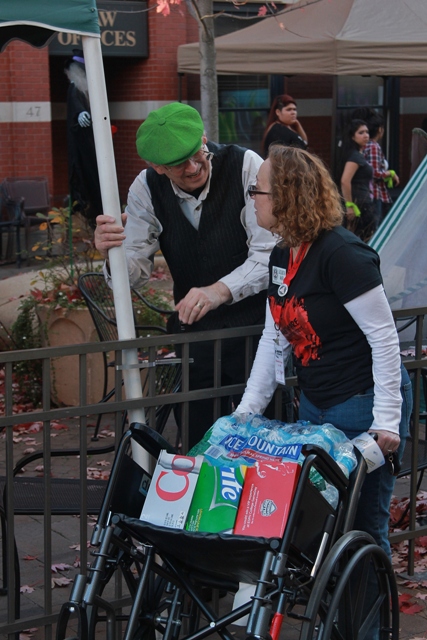 After a while, Haney had other matters to attend to and encouraged me to venture out on my own and take pictures. Here are but a few… 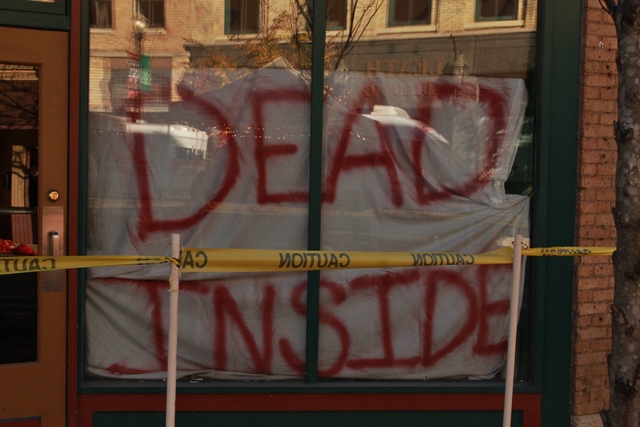 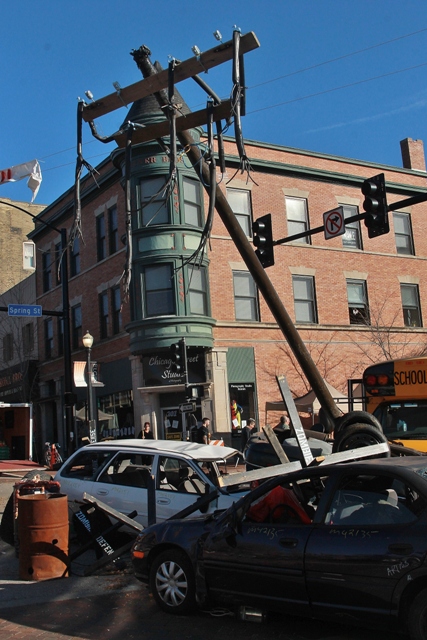 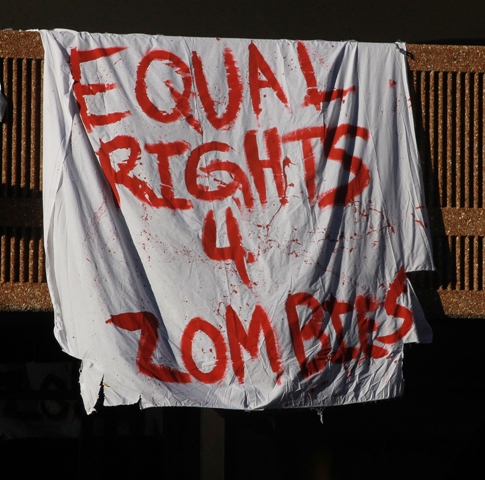 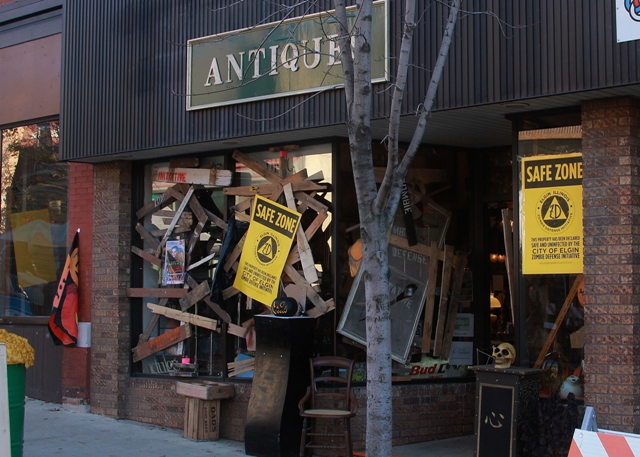 According to Elizabeth, this year saw an explosion of volunteers eager to do their parts in enhancing the guest experience. This was especially true with the younger generation who eagerly adopted zombie personas,  including an entire undead marching band that I assume once heralded from a local high school in their former lives.

I particularly enjoyed seeing a group of would-be zombies get instruction on how to walk by none other than Marvel’s Deadpool, himself. 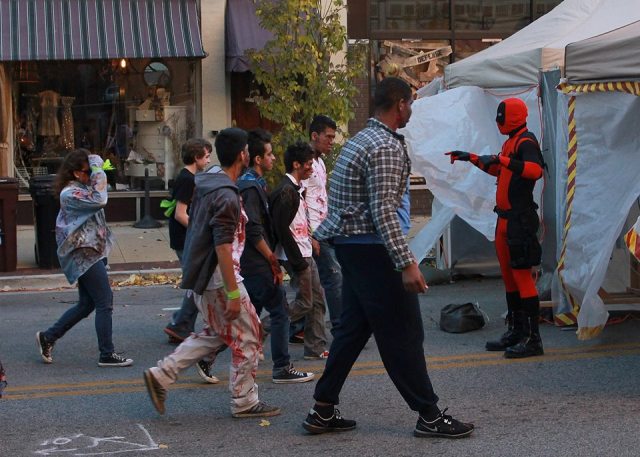 Last year saw the addition of Steampunk and their own section of dealers. This science fiction and fantasy sub-genre has gained…um…steam over the years and consists of imaginative costumes and designs that highlight British Victorian or American 19th Century/Old West era styles with a futuristic touch. 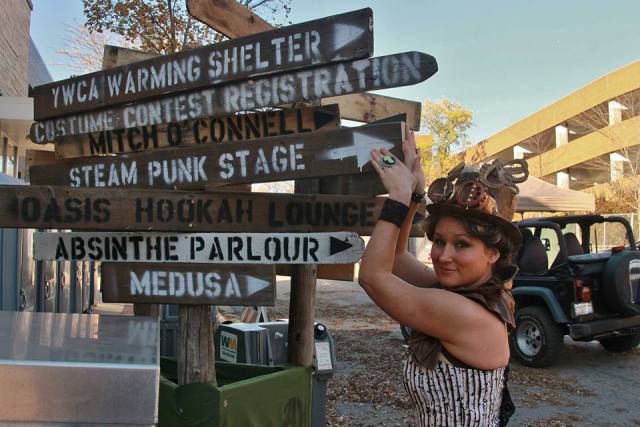 Amanda Wink shows visitors the way to the Steampunk Stage

Aside from being some of the most creative fans out there, they were also the friendliest and I had no trouble enticing a group of them to pose. It later turned out that this group wasn’t just a random assemblage of fans as one of them, Earl Evangelista  (AKA: Sir Earl of Roselle), would later explain. “We’re a “secret” group called Airfleet Whimsy.  We are a fleet of  Steampunks that cause as much trouble as often as we try and save the day.  Each member has a specific skill set to lead us down a path full of shenanigans.  Much of our clothing was created, resale shopped, or upcycled by members of the fleet.  We often invade towns, festivals, apple orchards, antique shops, conventions in our Steampunk wears.  I’d tell you more…but…well…you know…” 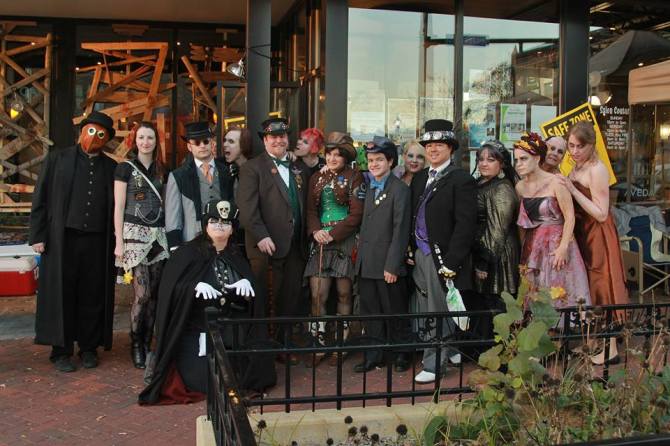 The Steampunk Secret Society, Airfleet Whimsy (but you didn’t see them here)

In an effort to add even more activity while also reflecting Elgin’s culturally diverse community, this year saw the infection spread as more streets were added; including one dedicated to graffiti painting. 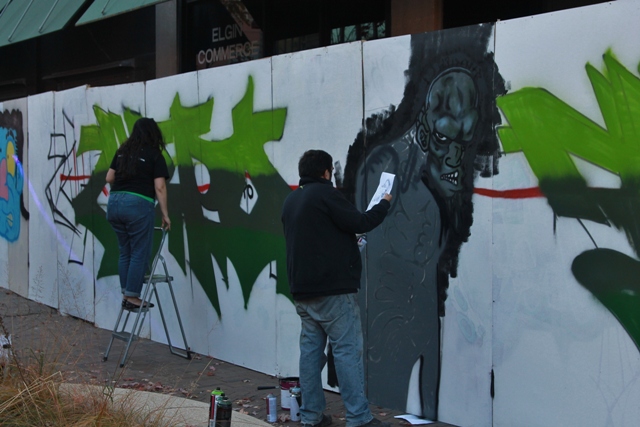 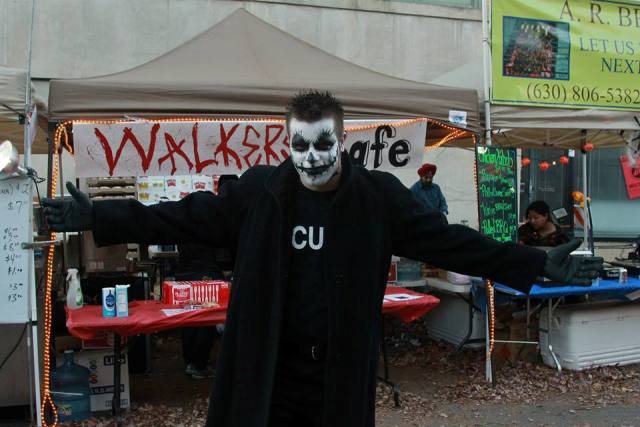 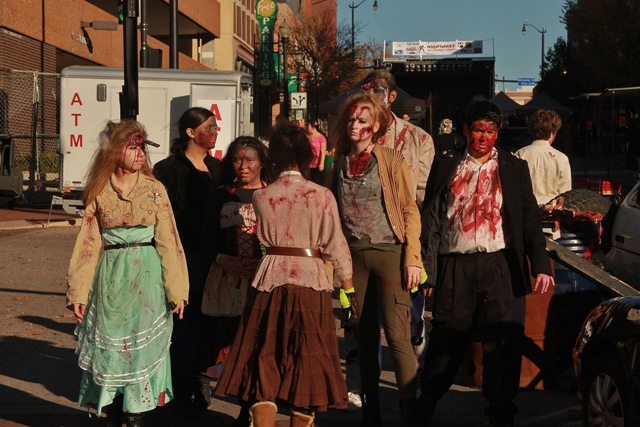 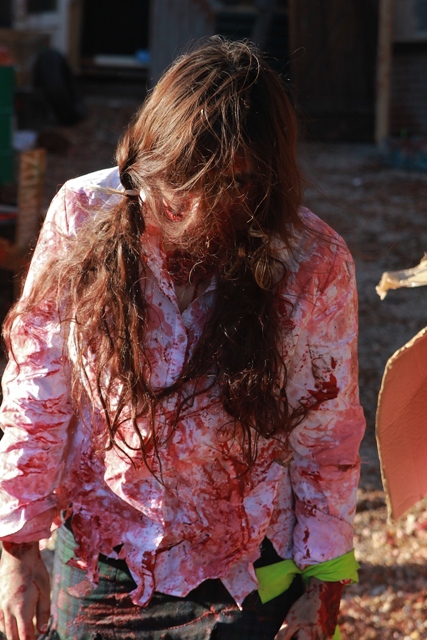 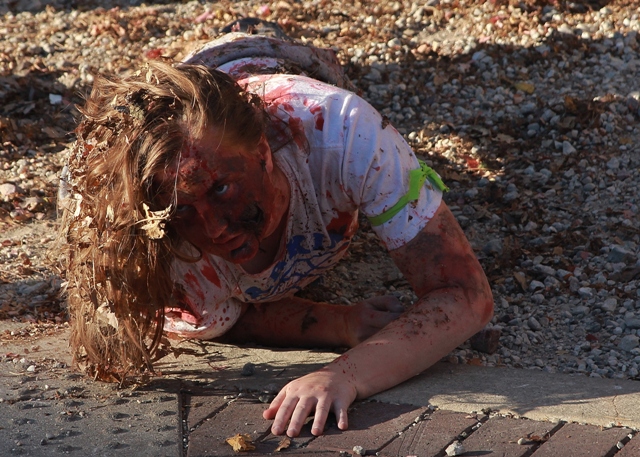 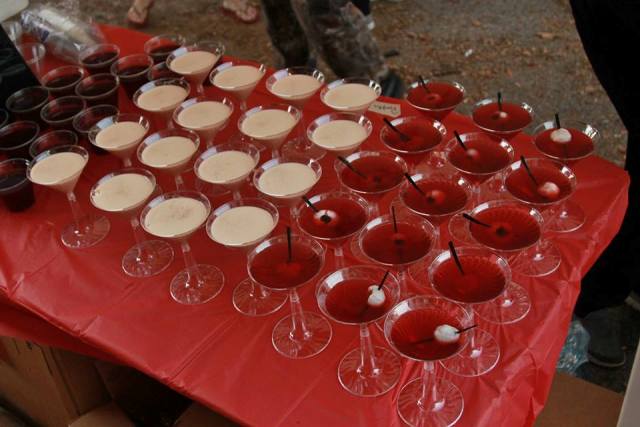 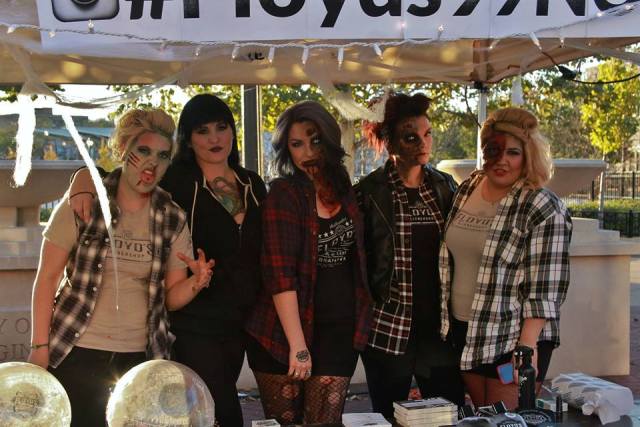 Every once in a while I’d stop and have a seat near one of the stages and chat with a really amazing woman named, Sigi. She was really interesting and I regretted not having a chance to formally say goodbye by the time the event was underway. The photos you’re seeing here are really the calm before the storm as this night, with it’s unseasonably warm temperatures, would see a record number of patrons so it was no wonder I’d lose track of her.

Sigi  – one in a million

By the time I made it back to Elizabeth she was watching her friends, Alice Moring and Judi Brownfield (owner of Elgin’s Books at Sunset) getting interviewed by local filmmakers creating a documentary on The Walking Dead. Alice spoke of how the show’s success is due to the human drama behind the zombie apocalypse and incredible story-telling.

And speaking of sunset….it wasn’t long after these shots that the guests started to arrive. The Nightmare was about to begin.