Nothing says Happy Holidays like a little bit of horror!

For seven years Chicago’s Wildclaw Theatre has opened the holiday season with a fun performance of 5 radio horror plays. They invite a panel of judges to choose a winner of the coveted Bloody Axe award. The show takes place at  the Mayne Stage (http://www.maynestage.com/) which adds to the fun – food and drinks flow freely to the enjoyment of all.

TerrorDave Fuentes and I have attended the past two years. It is always fun to rank the plays ourselves and see if we agree with the judges. I’ve yet to see eye to eye with them – maybe this is the year I’ll choose the same winner.

The music was provided by the Deathscribe Orchestra, a group of musicians that played musical accompaniment for the singers as well as music for the plays. 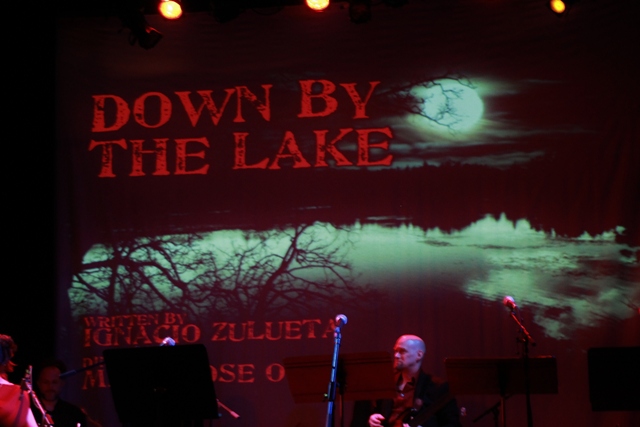 Down by the Lake

Lauren is setting up camp by a lake when a sheriff comes by to talk to her. She warns Lauren that a criminal, Carl, is lurking in the area. The sheriff tells her the history of the lake. It was formed when a dam was built and flooded the entire town. Only one house is left, and it sits on the edge of the lake. An old lady owns this house, but no one has seen her in a long time.

After the sheriff leaves, Carl comes by and we realize that Lauren and Carl are together. He is excitable because of his experience trying to rob the old lady’s house. It turns out the lake is hiding a dark secret and the sheriff just might be in on it!

My Review: This play was average. There is an inherent issue with a radio play style drama in that everything has to be described by one of the actors. We don’t get to actually see anything happening.  This play suffered because of this limitation. It felt like most of the dialog was exposition describing the town under the water, and describing Carl’s burglary of the house. It felt like story telling and not story experiencing.

As always we had a great commercial sketch for Four Moon Tavern. This year a pointed discussion on Star Wars vs. Star Trek got all the patrons shot. Good times! 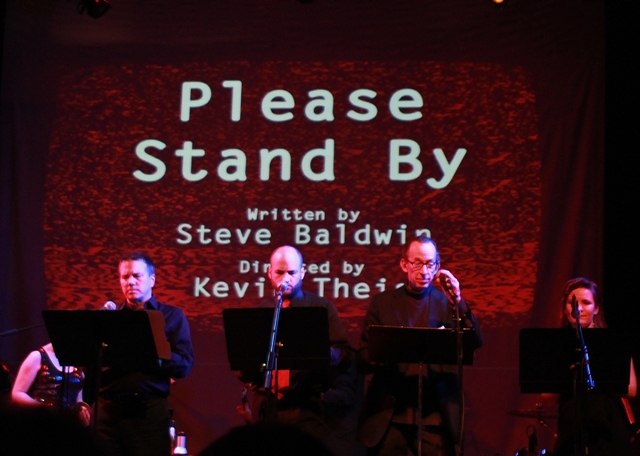 An unknown person is clicking through several different channels on TV. There are several TV shows that alternate through the play. The clips are from a 1964 horror movie called “Please Stand By”, a baseball game, the international news, a morning talk show, and a CSPAN-style broadcast. As the channels keep cycling through, it becomes clear that something is very wrong in the world.

The old movie acts as a narrator that is predicting what’s happening in the world in the present day. The baseball game starts with an argument on the pitcher’s mound and ends in a cannibalistic brawl; the news talks about blackouts and riots; the CSPAN guys start literally talking gibberish; and the talk show hosts turn a segment about the best hot dog in the city into a rant about government conspiracies.

As each channel finally ends in static, we meet our unseen TV watcher for the first time, and he doesn’t take the end of the world very well at all.

My Review: Very good play. I thought it was a creative way to show what was going on by having the super-cheesy old movie explain what was going on; it didn’t sound like an exposition dump. At first I wasn’t sure what I was supposed to be hearing on all the different channels. I liked how the slow build up of the seemingly random set of channels started to tell a coherent story. My favorite channel was the talk show guys and the hot dog showdown – it was funny and a nice break between the other, more horrific storylines. One of my favorite Wildclaw company members, Steve Herson, played one of the talk show hosts and was hilarious ranting about how mustard was being used for mind control. This play definitely worked on the strength of the radio play format.

The Wolf at the Door

My Review: Every year there seems to be one play that perplexes me, and this one was it. The storyline itself is simple – two sisters vying for the same man, albeit he’s a wolf. I wasn’t enthralled by the characters nor the singing. The repetitive singing and dialog was numbing rather than scary.

During the intermission we had two songs. Sadie and the Stark sang “Black Hearted Lover”, and Casey Cunningham and Troy Martin sang “Let Down”.

This play is told in a narration style. The narrator Tells the story of Louis, a milquetoast DMV worker and his tragically boring life. He gets up, takes the same terrible bus ride to work, works in the hell that is the DMV, comes home, and stays up all night as his upstairs neighbor blares rock music. The cycle gets worse and worse until one day he cries out that he wants something to take this all away. There is a loud knock on the door –  a black cat! He names it Kitty and it relaxes him. The best line of the night is when he starts saying, “I finally have a friend”. When the music starts again upstairs, the cat begins to purr “Murder”. Louis spirals out of control – but when the police show up at his door, the cat isn’t speaking anymore.

My Review: Loved it!!! This was by a huge margin my favorite play of the night. The narration device was so effective. The exposition around Louis is relatively simple – he’s a man in a canyon-sized rut, unable to stand up for himself at all. It only takes one small catalyst to tip him over the edge. Telling it in a children’s story style amped up the horror, yet infused it with humor. Michaela Petro put in a superb performance as the cat – I think she could convince me to murder my neighbors too!

A woman and man are trapped in the locked conteol room of a deep sea submarine. They are sinking fast, and the pressure is slowly crushing the sub. The man tells the story of what happened. The sub was investigating what appeared to be an underground city in a fracture zone at the bottom of the ocean. After passing over a seemingly bottomless shaft, the workers on the sub started going crazy. Only the two in the control room are left normal – the others are outside pounding on the door. The man says he might have been the carrier for the thing he saw in the shaft, and he sabotaged the ship. The woman is mad that she could have possibly escaped, but the man insists he’s keeping evil out of the world. She starts going nuts – is she possibly “turned” as well?

My Review: This play was very good. I think it has the same problem as Down by the Lake did – we are in the aftermath of an incident. We are told a big story about what has already happened vs. going through the story with the characters. This one worked much better, as we start in the middle of the story.  The sub is bursting bolts, there is pounding on the door – we feel the intensity of the problem as we are being told what started it. We are right in there with the two on the sub, fearing what is outside the locked door.

While the judges deliberate, Michaela Petro sings our last song of the evening, “Kill of the Night”.

One thing I was very pleased about was the slight rearrangement of the starge. Instead of having the sound effects people parallel to the audience, they angled the table about 45 degrees. This reduced the,amount of attention the sound effects people got when they we’re doing their job – which can look very silly at times! It allowed more I. Erosion into the story.

TerrorDave Fuentes and I ranked the plays before the judges returned.

My choices, from 5th to 1st: The Wolf at the Door, Down by the Lake, Fracture Zone, Please Stand By, and Louis. Louis was my runaway favorite!

TerrorDave Fuentes chose Please Stand By as his favorite.

How did the judges vote? Louis and Wolf at the Door tied for second, and Fracture Zone wins! Christopher Walsh takes home with the Bloody Axe this year.

Next year will the judges and I agree? I have a feeling we won’t…

Wildclaw Theatre’s next production – a new production of Scott Barsotti’s play “The Revenants”, opens January 8, 2015. Tickets are on sale now – cheek out a trailer here: http://www.wildclawtheatre.com/2014/12/12/revenants-2015-trailer/