I was asked to review Dawning of the Dead from the TERROR DAVES’ site, and I typed in BOLD letters “you had me at ZOMBIE APOCALYPSE!” This film has a well thought-out story line with great special effects and some great acting. I will say though that over the last few years there have been more misses than hits in this genre and I am glad to say this film falls into the latter. The director did a great job showing the global scale of a zombie apocalypse and there are many nods to the George Romero zombie classics. Improvised weapons harken to memories of Peter Jackson’s Dead Alive (1992) as well.

END_OF_DOCUMENT_TOKEN_TO_BE_REPLACED 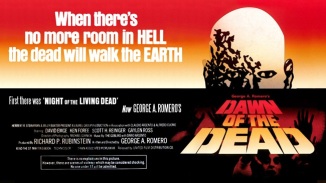 The Days of the Dead horror convention opened back up for business at 11 am that Saturday. We arrived shortly after the doors opened and noticed immediately that there were at least twice as many conventioneers as the night before. The Dawn of the Dead panel was slated to feature Ken Foree, David Emge, Gaylen Ross, and Scott H. Reiniger but Emge canceled his appearance Thursday, leaving the other three to answer questions concerning their roles and working with Romero himself. Sadly, Romero, who was slated to attend this event also cancelled due to poor health. The following was transcribed from audio of that panel…

END_OF_DOCUMENT_TOKEN_TO_BE_REPLACED

As my pre-birthday celebration continued I had no idea what to expect next. Dave has a real talent for scheduling vacations to emphasize the funnest places to visit ever. Once again Dave was totally secretive on the day’s destination and I truly had no idea where we were going. All I did know was that is was very cold out.

As we got to the location hints started to appear that apparently went right over my head. I honestly had no clue as to where we were going until Dave came right out and said “They’re coming to get you Barbara!” I knew exactly where we were going and was just so thrilled!

END_OF_DOCUMENT_TOKEN_TO_BE_REPLACED

There was still sunlight when I arrived at the Elgin Safe Zone for their annual Nightmare on Chicago Street this past Saturday evening. This year I’d be attending alone as most of my friends were back home watching the Chicago Cubs play in a historic baseball game that would see them heading to the World Series for the first time in over seventy years. Under those circumstances, their absence was understandable…and what better reason to skip a zombie Apocalypse than for the possibility of watching Hell freeze over instead? In my world, however, the Nightmare on Chicago Street IS the World Series and there was no place I’d rather be.

END_OF_DOCUMENT_TOKEN_TO_BE_REPLACED

An old friend of the Terror Daves offered us a sneak peek at Six Flags Great America in Gurnee, Illinois. I’ve never done it before and had always wanted to see what the fuss was about it. Needless to say, I couldn’t refuse her offer.  We arrived around 6:30pm on a Thursday night and the sun was just starting to set. After ninety minutes on the road we saw the park’s familiar sky tower, clutched by King Kong.

END_OF_DOCUMENT_TOKEN_TO_BE_REPLACED

CLEVELAND, Ohio, April 11, 2016 – Almost 13 years after releasing the first official roleplaying soundtrack to the iconic Dungeons & Dragons® game, award-winning composers and dark music pioneers Midnight Syndicate have teamed up with premier horror game designer Twilight Creations to produce a soundtrack album for the zombie apocalypse-themed Zombies!!! board game.  The dark instrumental album, which will feature new and previously recorded material blended with movie-style sound design, is designed to heighten the game play experience. The musical theme will center around the Zombies!!! board game and its 15 expansion sets that pay homage to classic zombie films, especially those of directors George Romero and Sam Raimi.