The Conclusion of the 35th Anniversary of Svengoolie story…

We were directed back upstairs to the third floor of The Museum of Broadcast Communications to witness the unveiling of the new Svengoolie exhibit a.k.a. the final resting place of his old coffin. Having grown up with The Son of Svengoolie, it meant a lot to me as it was one of the few props that remained throughout the years. This, of course, lead to its inevitable wear and tear so, nostalgia aside, it was definitely time for an upgrade. I’ve always wanted to see the original in person and now, thanks to the Museum, everyone can!

We all gathered while awaiting the big moment… 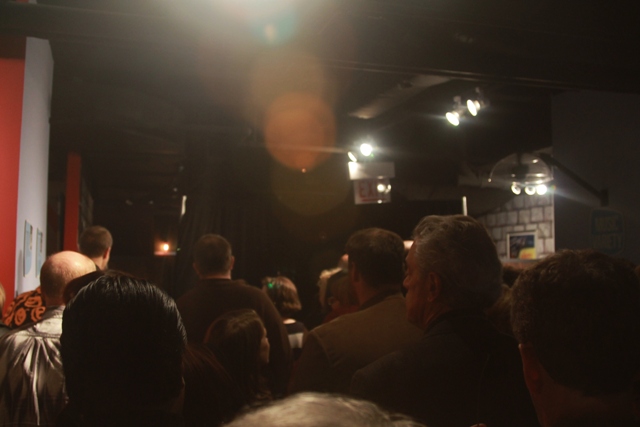 Finally the curtain was drawn sending the crowd into a frenzy.  Not only did the new (and permanent) Svengoolie exhibit surpass all expectations, it also (on this night) featured the horror host himself.

My first view of the new exhibit

The large number of fans who’d gathered to see the exhibit meant it was impossible for everyone to see it at once. The majority of us had to wait our turn before getting a decent view. I’m not quite sure how else to describe the experience other than being caught in a Svengoolie vortex. We were all moving in a slow, steady rotation while catching glimpses of fellow fans along the way. It was during this time I saw local ghost hunter, Ursula Bielski, my friend Bill Yingst, as well as a couple of people I recognized from Sven’s Ribfest appearance back in 2012. Yessiree, folks, I may be famous for screwing up names but never forget a face!

And then finally I was “face to painted face” with the hallowed coffin. I tried to imagine a younger Rich Koz painting his mentor, the original Jerry G. Bishop Svengoolie, before putting his own character’s image over it five years later. I imagined him working on it in his parent’s garage while Grand Funk Railroad played via a small transistor radio in the background (I’m making all this up by the way).

I wondered if his family and friends walked by, smiling, while shaking their heads and having not the slightest inclination  that the box would spend the next thirty years on TV and become an indelible part of Chicago’s popular culture? Then I wondered if the Museum ever used infrared technology on it, if they could still see the Jerry G. Bishop image like those Picasso paintings. 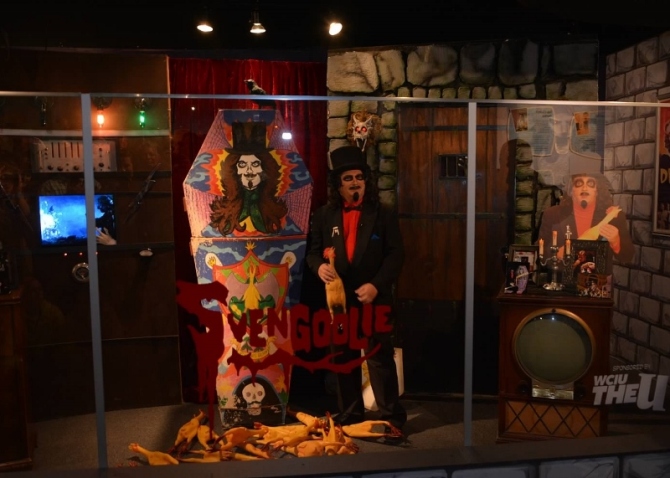 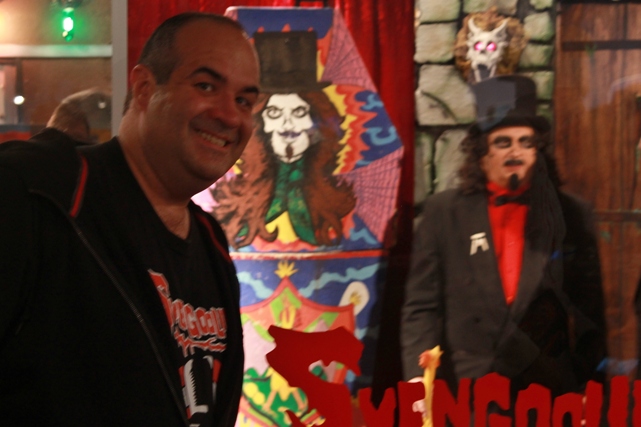 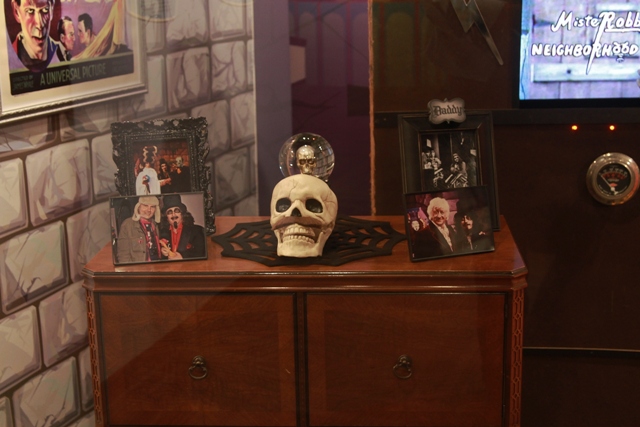 Everyone was determined to use what little time they had to see the exhibit at snapping photos and taking in as many details as they could. That is with one glaring exception…David the Rock Nelson.  Still engrossed in his latest “Devil Ant” production, he was far more interested in springing his rubber insect at guests rather than viewing the new display. In fact, he literally walked right past Svengoolie while stalking the ant’s latest “victim.” I hope someday I’ll get to see what he filmed at this event.

Eventually we all made it back downstairs where Svengoolie would be emceeing a Halloween costume contest. Personally, I was thoroughly confused with this portion of the night’s festivities.  I understood having him show up in costume (it was, after all, a celebration of “Svengoolie”), but did they have to put him to work on top of it? Aside from that, the place was loaded with people and I thought it was a bit too stuffy to be adding extra activities to his already full schedule.

Of course,  I have to admit that ever since his cardiac event two years ago I’ve been overly empathetic; particularly in regard to his becoming overheated or properly hydrated. Recently when I saw him at The Nightmare on Chicago Street (story still to come) I immediately asked if I could get him some water to which he gave me a confused look before responding, “Um…I just got here.” Aside from that, my concerns are ill-founded as he’s being assisted by the best in the business, Jim Roche not to mention it’s a good bet the host is gonna outlive ME.

The contestants all lined up for judging. Usually the way these things work is that Svengoolie introduces the participants before holding his rubber chicken above each one; a cue to the audience that it’s up to them to choose a winner. Whomever elicits the loudest response (a “Boo” being just as effective as a “Cheer”) takes home the prize which, in this case, was four tickets valued at $180 for a local Halloween attraction called “Fear City.” 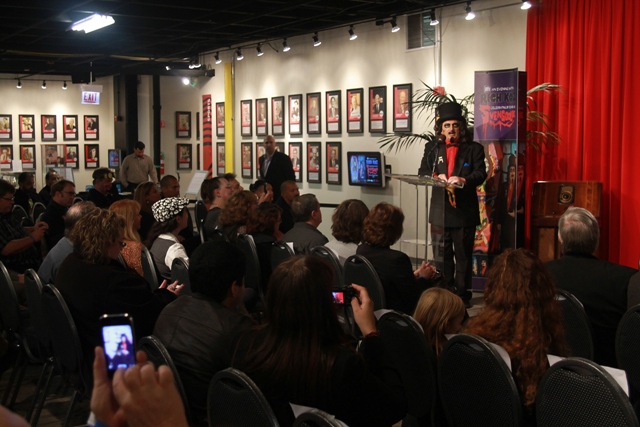 Tonight’s first place contestant was “Eagle Man.” Assuming that’s what he was supposed to be, this is the mascot of a local Chicago insurance company who’ve created some really unintentionally funny commercials using the man-sized bird.

After the stage cleared, everyone was invited to stay in their seats as the Museum would be play a Svengoolie hosted movie complete with Sven-surround. Many commercial TV horror hosts used to raise the entertainment level of less-than-stellar movies by adding sound FX or commentary into it. In Chicago, we call it “Sven-Surround” and its something that’s been a lot rarer since he went national as many mainstream viewers complain when the movie gets tampered with. I’ve encountered many of these folks and always say the same thing, “If you want a pure theatrical presentation, go rent the damn movie from your local video store or library but let a horror host work his craft for the rest of us!”

Tonight’s feature was 1957’s The Beginning of the End which made sense since this film was set here in Chicago (though baring little resemblance to what the city looks like today). This was the same movie that aired during one of Svengoolie’s Squared Circle appearances so I’d already had the honor of seeing this alongside fellow fans.

I gave up my seat for someone else and walked around the Museum to socialize with friends. One was Rick Klein who is the hard-working guy behind Fuzzy Memories TV. This site has some of the most amazing old clips from the era of Chicago Television I grew up in, like Son of Svengoolie. Apparently Rick isn’t just a master at hunting down rare TV footage but also horror host memorabilia. He managed to track down an amazing old poster from the Jerry G. Bishop Svengoolie era that appeared to be in pristine condition. Sven would later remark that this poster was likely created for Bishop’s final appearance. “I think we did that appearance just before word got out about cancellation,” said Koz. “We already knew, and, at it’s end, Jerry said something like ‘tune in this week for a big surprise’ to the crowd. In other words, some other show would be on. I think it indeed was his final appearance as Sven.” 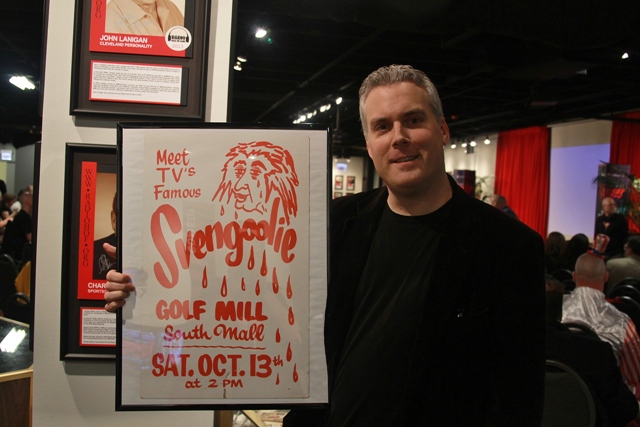 I also saw my friend, Elizabeth Haney, from Acme Design.  At the time of this event, they were hard at work on Svengoolie’s new set. Just as one chapter was closing, a new one was already opening! 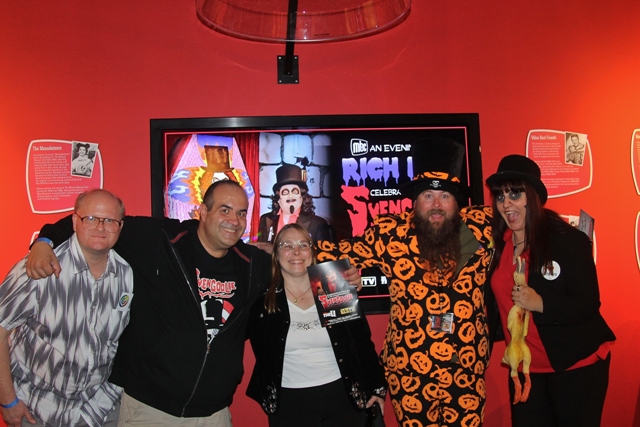 At this point Don & Bunny (who were kind enough to drive me to this event) were ready to go home. It had been a long night but I wanted to say “Goodbye” to Svengoolie and Jim Roche. I then discovered him sitting at a table while greeting and signing for a long line of fans. My blood pressure began to elevate.

“What!? Now he has to do a signing on top of everything else!? Don’t they know how warm it is in here??? And how old is that water bottle of his anyway? I’ll bet it’s not even cold! I should go get him a fresh bottle! I should…”

One thought on “The Final Resting Place of Svengoolie’s Old Coffin!”