Here we are again with another entry in my “Alien Invasion Films of the 50’s” series, this time covering a classic from 1956 called EARTH VS. THE FLYING SAUCERS! This is an interesting film in that has a typical 50’s fun feel to it made all the better by the amazing special effects by animation master Ray Harryhausen! This is actually the first time Harryhausen animated something other than a living creature showing how creative and versatile he was. 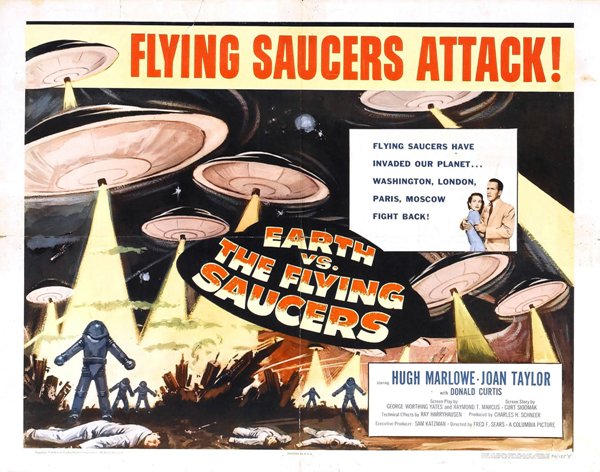 This movie was influenced by a book written by Major Donald E. Keyhoe called “Flying Saucers From Outer Space.” A newly married scientist, Russel Marvin (Hugh Marlowe), and his wife Carol (Joan Taylor) are heading to work when a flying saucer appears right behind their car for a short period of time and then flies straight up out of sight. Unknown to both people the noise they hear from the saucer is actually a message meant for Marvin, that is inadvertently recorded at the wrong speed onto a tape recorder in the car. Marvin works for Project Skyhook, a space program in charge of sending research satellites into space. Many of the satellites have been destroyed and no one seems to know who by.

Next we are introduced to General Hanley, played by Morris Ankrun, who is also the father of Carol. During a get-together the three discuss why 10 of the 11 rockets launching the satellites into space were destroyed and Marvin cites flying saucers as being a possibility, especially in lieu of his earlier encounter. Soon after the wreckage of rocket 11 is seen burning up in the atmosphere. During preparations to launch rocket #12, a flying saucer appears and lands at the facility. Three robotic creatures come out of the craft and are met with hostility from our military, killing one of the creatures. In retaliation the saucer destroys the rocket before it can be launched and to add good measure, kidnap General Hanley.

The Marvins end up being trapped underground and in playing back their tape recorder, with the batteries running out, realize that the sound recorded of the flying saucer from the previous day was actually a message to Dr. Marvin from the aliens wanting to set up a peaceful meeting. This is where the plot gets shaky. Though Marvin is forbidden by the military to contact the aliens, he does it anyway. Instead of trying to explain our error, he just accepts the aliens’ threats of world domination as the way it now has to be. Shouldn’t he at least try to reason with them? An ultimatum is given: we have two months to surrender, allowing the alien race to rule the planet.

Once back in Washington Dr. Marvin figures out a possible weapon that could help them defeat the aliens. It ends up working better than expected as a flying saucer shows up and they test it out, driving the craft away. This attack prompts the aliens to make an announcement, that if earth doesn’t surrender in eight days, then they are going to do something to the sun, causing severe weather patterns to develop. Of course we do nothing and the attack begins.

What follows is a series of incredible special effects sequences as the saucers attack and destroy landmarks throughout Washington while at the same time, we destroy the saucers with Dr. Marvin’s weapon. These sequences will go down in movie history as some of the best ever put to film and Ray Harryhausen really deserves a round of applause for his work on this film. Harryhausen always gave life to his creations and the saucers here are no different. Though we do actually get to see the invading aliens, it is the saucers themselves that are the star of the show. In fact, the saucer design is so perfect, Tim Burton emulated them in his 1996 film MARS ATTACKS!

I have been keeping my fingers crossed that this, and many other 50’s era science fiction films, will get the Blu-ray releases they so justly deserve. Currently this title is available on DVD and features a colorized version of this film but to be honest, black and white is the way to go here. The picture quality on this release is actually pretty good so it will definitely be a great addition to your movie collection!

Next up: INVASION OF THE SAUCER-MEN