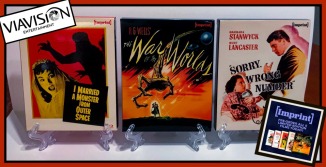 Boy, that quarantine sure made me appreciate my physical media collection. With so many folks at home streaming, most services had to reduce their quality and, with a few exceptions, didn’t have much I was interested in anyway. I already stood on my physical media soapbox last year so today I’m going to focus on some of the products themselves. Imprint Films is a new premium blu-ray label courtesy of an Australian company called Via Vision Entertainment. Last March (just before the Apocalypse) they advertised their first five releases; films that were never upgraded to Blu-ray before. Three of these, I really wanted in my collection and quickly pre-ordered despite the steep shipping charges. They finally arrived last week and I eagerly watched all three. Was it worth it? Well, let’s dive in and see. Also note that, despite coming from the land down under, these releases are all Region Free and will play on US Blu-ray players.

END_OF_DOCUMENT_TOKEN_TO_BE_REPLACED

The good people at Scary Monsters Magazine have just dropped their latest masterpiece – Monster Memories #26! Aside from sporting yet another frame-worthy cover, this 145-page opus is loaded with so many great articles it’ll warrant multiple readings. My favorite comes straight of the gate with Jason Strangis’ “Fantastic ’50s” and I also loved “Monster Robots and Donuts” (best title ever) by Mark Glassy. If you’re a fan of War of the Worlds than you are gonna love this issue. Don Smeraldi’s “All is Wells in the World” is Rondo-worthy good and I just loved it! Monster Memories #26 even has a wonderful tribute to Rick Koz Svengoolie who will probably be so relieved to see a story about him in SM/MM that wasn’t written by me. Although….if you skip over to page 90 you can check out my article/tribute to Harou Nakajima. I was fortunate to have seen the legendary man in the Godzilla suit just (1954-1972) just weeks before his death at the Indianapolis Days of the Dead convention. Assisting me with this piece was the great J.D. Lees – publisher of G-FAN and the man behind G-FEST as well as Tim Bean who worked with Nakajima on several occasions including Indy. Tim and J.D – if you’re reading this, a Godzilla-sized THANK YOU and complimentary copies of MM #26 are headed your way. As for the rest of you, what are you waiting for? Go out and get yourself a copy!

My fellow Terror Dave, David Albaugh, celebrated his birthday just a week shy of our road trip. Since we’re rarely within nine hundred miles of each other during special occasions, I offered to treat him to dinner while we were on the road. My plan was to find something fun and unique; ideally in Roswell, New Mexico. Unfortunately, while the UFO capital of the world was chock full of gift shops they came up decisively short in terms of gimmicky food places. Not to worry because, as fate should have it, there was an alien themed restaurant right down the street from a hotel we were already booked at. And so, just two weeks after David’s special day, we’d celebrate at the E.T. Encounter Diner in Sedona!

END_OF_DOCUMENT_TOKEN_TO_BE_REPLACED

The International UFO Museum and Research Center is appropriately nestled on Roswell, New Mexico’s Main Street. Back in 1947 when the famous “Incident” occurred, the building served as a movie theater while likely going on to show many of the science fiction films its city would one day inspire. The museum opened in 1991 and not only features information on the Roswell Incident but the history of UFO sightings and alleged encounters worldwide. After spending the earlier portion of the morning perusing the local gift shops while taking full advantage of any and all goofy photo-ops, we were now ready for a more serious approach.

END_OF_DOCUMENT_TOKEN_TO_BE_REPLACED

It’s not often that a movie like EXTRATERRESTRIAL comes around where they do pretty much everything right, especially a horror movie. If more film makers believed in doing something original like this, as opposed to sequel or remake after sequel or remake, then the movie industry would probably be in much better shape (and yet this film only received a limited release in the United States). 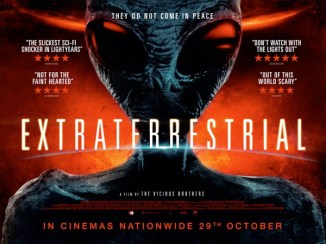 END_OF_DOCUMENT_TOKEN_TO_BE_REPLACED

I hope everyone’s been enjoying Terror Dave Albaugh’s retrospective on ’50s Science fiction films. I know he’s got a lot more in the works and has been doing a great job at highlighting those old classics many of us grew up watching via Creature Features or horror hosted shows. The hope is that the series will either inspire you to watch them again or, if you’re unfamiliar, discover these gems for the very first time.

Today I’d like to spotlight an old sci-fi film too but, unlike the previous entries, one that proves not everything in the fabulous ’50s was stellar. The other night I was scrolling through the latest offerings on Netflix stream when I came across a film I hadn’t seen since I was a kid. The movie is Beast with a Million Eyes but, after I re-watched it,  was ready to the curse the two I had!