Welcome to part three of my ongoing series of alien invasions films of the fifties! If you missed the first two parts then you are in luck! Part one, which covered 1950, can be seen HERE! Part two, dealing with the 1951 classic THE DAY THE EARTH STOOD STILL, can be seen HERE! This time around we are continuing with 1951 with the movie THE MAN FROM PLANET X.

A mysterious planet, called Planet X, has entered our solar system. It’s closest pass to the Earth will be a remote area in Scotland and an American reporter, played by Robert Clark, is sent to get a story. He joins up with Professor Elliot (Raymond Bond) and his daughter Enid (played by Margaret Field). Add scientist Mears (played by William Schallert), who does not get along with Lawrence the reporter, and you have the makings of a fun little film.

Since every one of these films has a romance between the male and female leads, the one here starts with Lawrence and Enid walking on the moors (though I would think that would be more creepy than romantic). While out there they find a mysterious metal object. Enid then drives Lawrence back to his hotel and on her way back home, gets a flat tire. She heads back into the moors since it is a shortcut back to her place. On the way through she sees a strange object that has either landed or crashed. She sees a pulsating light coming from the porthole and when she looks inside the man from Planet X looks back at her!

In a panic Enid runs back home to get her father and they both return to the craft. A strange light from the object seems to hypnotize Professor Elliot but thankfully this effect is only temporary. Then Lawrence and Mears approach the craft only to come face to face with the man from Planet X, who is holding some kind of weapon. Suddenly the alien has trouble breathing and Lawrence helps to get his supply of air functioning again, which forms a bond between the two humans and the visitor from Planet X.

All seems to be going well until Mears, who has plans of his own with the visitor, gets him alone and cuts off his air supply, planning on getting whatever scientific information he can from the alien corpse. When Mears leaves the alien wakes up and manages to kidnap Enid, Mears and eventually the Professor and a bunch of locals. The military is called in and with the help of Lawrence the captives are freed and Mears, the man from Planet X and the craft are destroyed in a barrage of military fire. 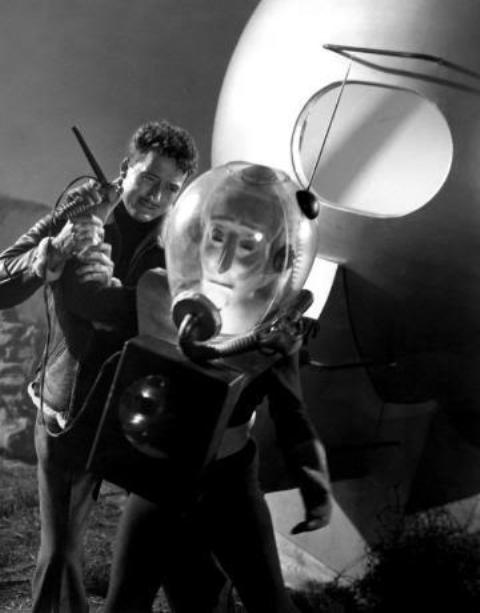 This low-budget entry is actually a really fun movie. It is very atmospheric, especially the scenes on the moors, and is well executed. The use of miniature effects is obvious but at the same time, they only add to the fun and charm of this film. The overall look of the film never makes you think that this was a low-budget film, thanks to director Edgar G. Ulmer. The design of the ship is very unique as it is in no way flying-saucer-shaped and since we can assume that it is a probe ship sent from Planet X, it is very probe-like in appearance, especially with the long spike on the top of the ship. The man from Planet X himself, though humanoid in appearance, in no way resembles a human (as is the case with Klaatu in THE DAY THE EARTH STOOD STILL). Though the face has no facial movements, its blank stare adds a genuine creepiness to the overall look of the creature.

It is never explained why the man from Planet X is here and it does seem, at least in the beginning, that he comes in peace. It is not until Mears shows aggression that the alien shows aggression back (but this seems to be more about self-preservation than anything else). Also not explained is how Planet X is a travelling planet as opposed to a stationary planet that we are all familiar with. Was the Man sent here to check out Earth so that on its closest flyby the inhabitants of Planet X can all move to Earth? Do they want to conquer Earth or live here in peace with us? I guess we will never know.

All in all I find this a fun film that I highly recommend. When you are in the mood for a 50’s black and white alien invasion film, definitely give this one a try. I would also recommend watching it at night and in the dark…you will not be disappointed!