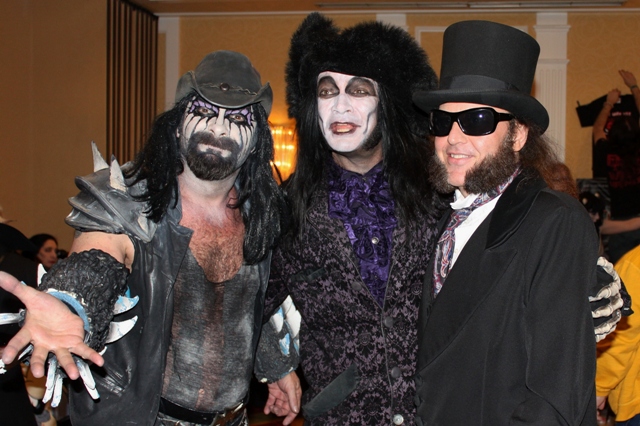 DAVE F: If you attended the 2011 Indianapolis Horrorhound Weekend, with the intention of finding the many horror hosts in attendance, you should have had no trouble in doing so. Occupying their own room this year, most were together in a single spot (with the exception of Sammy Terry & Joe Bob Briggs).

We had passed this section on our way to the celebrity rooms and noted a few familiar faces. As we entered, we immediately saw Roxsy Tyler, Midnite Mausoleum, and Dr. Calamari. Dr Calamari (easy to recognize as the guy with the tentacles coming out of his face) is part of a troop of performers called DARK CARNIVAL. 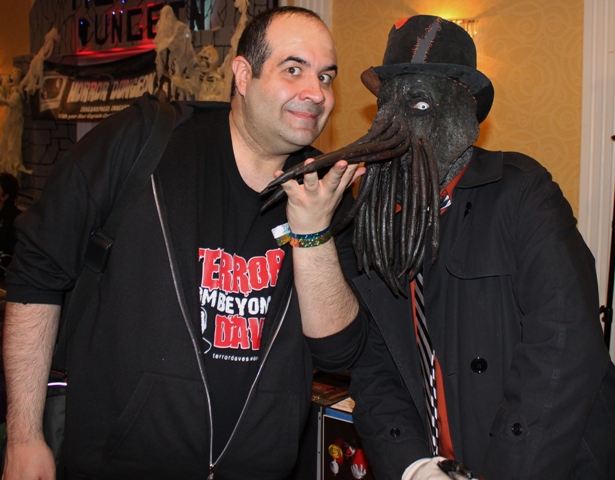 Dr. Calamari (as if you couldn’t guess)

DARK CARNIVAL performed a LIVE horror show in Bloomington, Indiana and were the masterminds behind the 2010 Vampira Tribute. This event (fully covered HERE) saw the largest gathering of horror hosts from across the country who descended upon Indianapolis to pay their respects to the “mother of all horror hosts,” Maila Nurmi, a.k.a. Vampira. 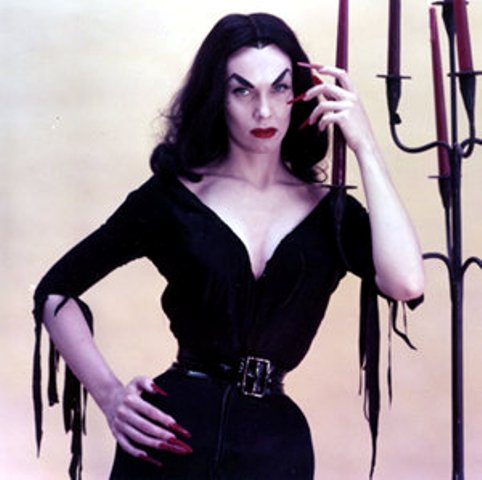 As we posed for pictures we heard a voice from the left say, “Well, it’s the Daves!” I turned and saw the great Son of Ghoul, himself, standing next to a display of his shows. As one of the classic hosts (celebrating 25 years on the air this June) I started getting tongue-tied and found myself blathering, “Son of Ghoul! You’re one of the most powerful hosts here!” He seemed to find that statement amusing and remarked, “Powerful?! Huh? You mean like a superhero or something?” We both laughed. 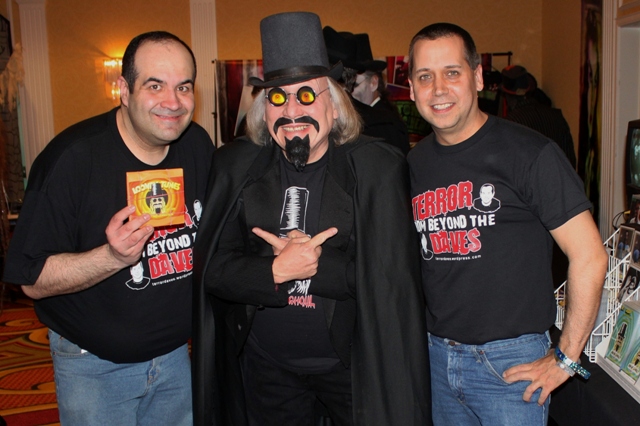 He walked around his booth and we posed for a picture. We bought a set of his hosted, vintage cartoons and talked a bit. He spoke of his heart attack last year (not long after the 2010 Horrorhound Weekend) and stated he was feeling much better. He looked like a million bucks and seemed a much peppier than our last meeting. He honored me by signing a picture from that occasion and I’ve been riding a “Son of Ghoul high” ever since. 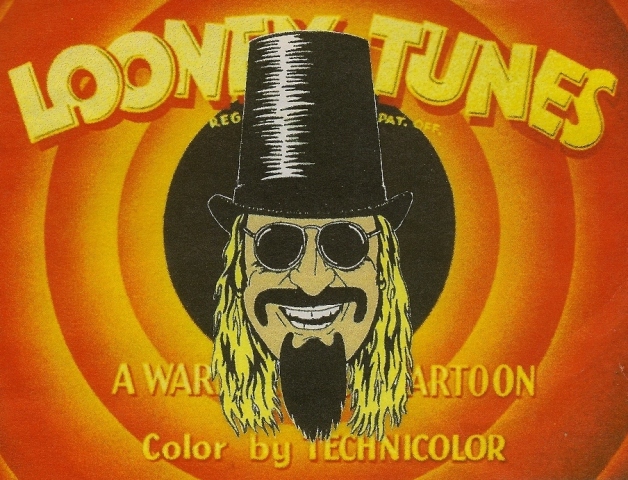 David seemed to be in his own euphoric state, as this was an entirely new experience for him. Unable to attend last year’s convention, and somewhat isolated in his New England venue, he has not enjoyed the same access to many of the hosts that I’ve had.

DAVID A: For me the highlight of HorrorHound Weekend was certainly the hosts. I was not fortunate enough to have attended the previous year’s Vampira Tribute so I would be meeting all of these hosts for the first time in person. In fact, even though my co-blogger, Dave Fuentes, did in fact meet most of them the previous year, this time it was going to be a new experience for him as well because of this site.  Since creating TERROR FROM BEYOND THE DAVES last July, we had gotten to know many of the attending hosts really well, through e-mails and phone calls.

Going into this convention Dave and I knew that the hosts would be our priority, since so much of Terror From Beyond The Daves is devoted to them. Sure we wanted to meet some of the celebrities too, but in our eyes the hosts were the true celebs! One thing we have learned is that planning is key to a successful convention experience. If you go in unorganized, you may very well miss out on some of the best stuff! When we arrived our main priority for Friday evening was to get the movie celebrities out of the way…in other words, we wanted to meet them all before the Saturday crowds and long lines. Thankfully our planning paid off and we accomplished everything relatively early, allowing us to concentrate the rest of the evening, and much of the remainder of the weekend, on the people we really came to see.

Prior to this event, I had only really met Penny Dreadful, Garou and Manfred Von Bulow from Penny Dreadful’s Shilling Shockers (not that this is a bad thing, believe me). I was also fortunate that the night before HorrorHound, I was able to meet the one and only Svengoolie (see my post HERE). Now I was going to get to meet some of the other great characters that have helped make Terror From Beyond The Daves such a success. 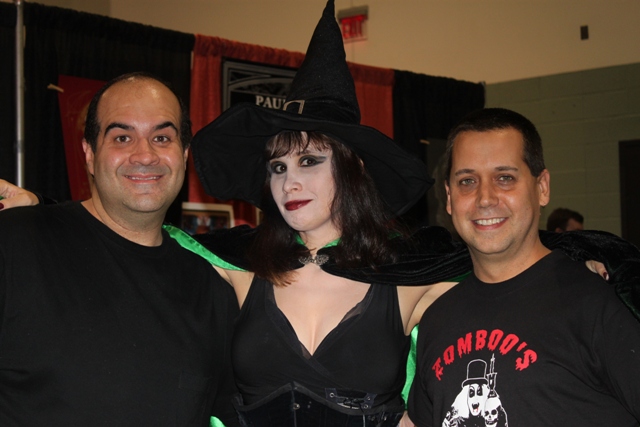 When we first entered the Host Room, I was a bit overwhelmed, to say the very least! Hosts for as far as the eyes could see! I just sort of stood there dumbfounded, not knowing who we should approach first. One of the first people we actually saw and talked to was in fact not a host, but someone who is very important to the host community…artist Brian Maze. He has become a great friend and does all of our host artwork, as well as a lot of artwork for the hosts themselves. We talked to him a bit and then moved onto the hosts themselves. 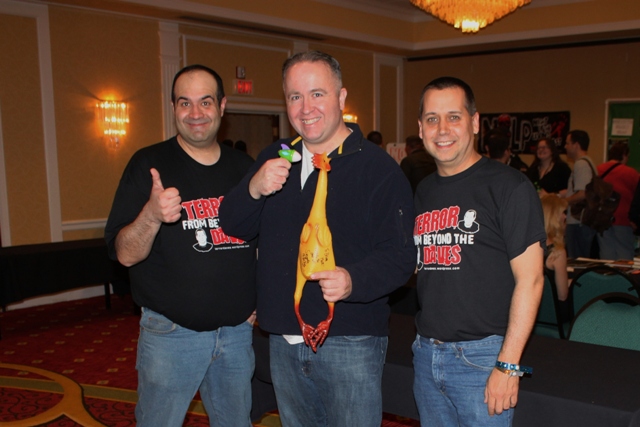 The Daves and artist, Brian Maze.

One host I was really anxious to meet was Dr. Destruction. He and Dave had become great friends and I was a big fan of his show. When you first meet him he is somewhat intimidating, being a larger than life character, literally! Destruction is a very tall man who towers over everyone near him. When you first see him it’s easy to be nervous going up to him, not knowing what to expect. I knew he was a nice guy from what Dave had been telling me but upon meeting him, it was quickly obvious that Dr. Destruction is one of the genuinely nicest people I have ever met. We spent a lot of time with him over the weekend and he added so much to our overall experience and provided countless numbers of laughs! 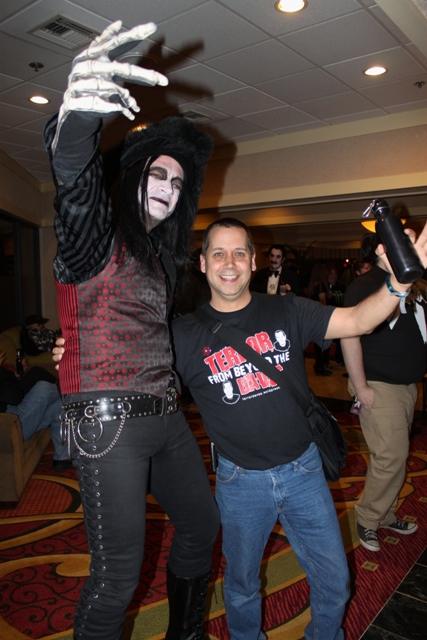 Me and Dr. Destruction.

Another priority to me was none other than Ms. Monster and her Monster Melons. As soon as she entered the room it is not difficult to see her…how many attractive women do you know have bright orange hair and blue skin? We introduced ourselves to the trio and were immediately welcomed with open arms. 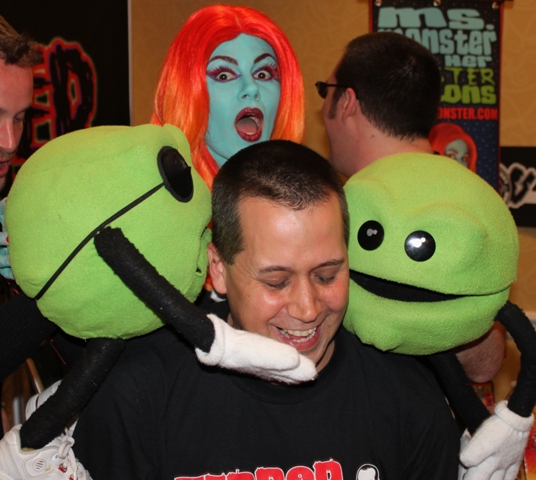 Me getting motor-boated by the Melons.

They were so friendly, funny and appreciative of what we have done for the horror host community. In fact, they were about to do a live broadcast on The Monster Channel and included us, interviewing us about the site! It was amazing watching Ms. Monster, Tit and Tat perform. They have such a great chemistry and the stuff they do is just so damn funny. I know I am looking forward to seeing them all at future events! 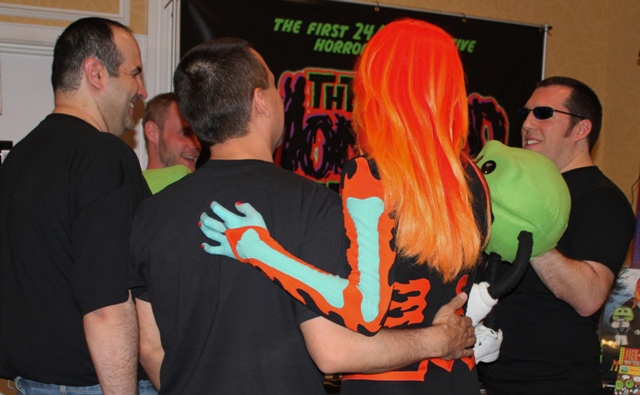 Being interviewed on The Monster Channel.

Some of the other hosts we met the first night, that really impressed us were Butch R. Cleaver, Chuck DeClown, Roxsy Tyler, Blake Powell from MIDNITE MAUSOLEUM (we actually didn’t meet Marlena and Robyn until Saturday) and Fritz the Nite Owl. After talking to these people for months through e-mails and such, it was an honor and pleasure to finally be talking to them in person, and being treated as an equal, and not just a fan. This is really what helped make the whole HorrorHound experience one to remember. There was just so much respect in the room and everyone seemed to be having such a great time.

The Daves and Butch R. Cleaver.

It was also during Friday evening that we met event organizer, “HorrorHound Magazine” writer and fellow horror host fan, Jason Hignite! We cannot thank him enough for his kindness and generosity. This is one of those rare events that I will remember forever! 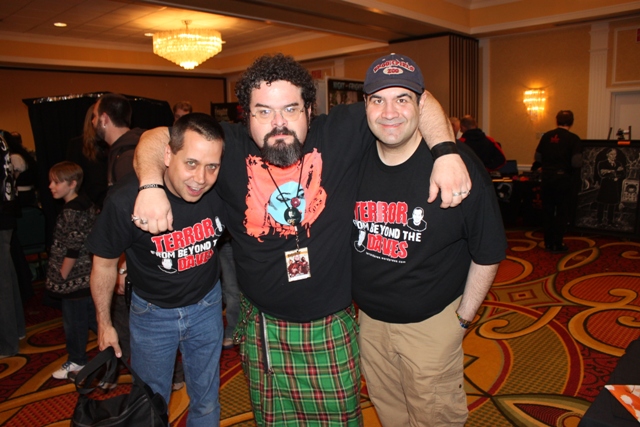 Because there were so many hosts there, it is impossible to cover them all in one blog so there will be followups to this, with our experiences with hosts such as Count Gore De Vol, Karlos Borloff, The Bone Jangler, Ivonna Cadaver, Evelle Lechat and many others! So stay tuned!!!