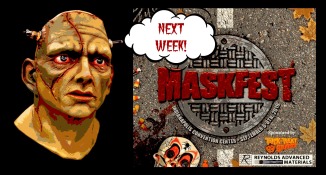 MASK-FEST is in just ONE week and I can’t wait to get the next six days over with so I can head to Indianapolis for Horrorhound Weekend ! Here’s another set of shots from last year. Hate to cut and run but I’ve got some packing to do…

END_OF_DOCUMENT_TOKEN_TO_BE_REPLACED

Countdown to MASK-FEST is getting to close to the Finish Line with just two weeks until the Indianapolis Horrorhound Weekend ! As if the anticipation wasn’t high enough, I’ve got another set of shots from last year’s big 10-year event! get started…

END_OF_DOCUMENT_TOKEN_TO_BE_REPLACED 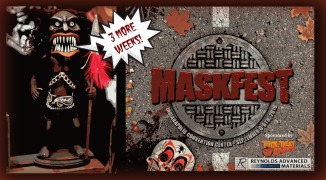 My Countdown to MASK-FEST continues with more masks from last year’s event. I hope it will inspire you to make a trip to Indianapolis and experience all the fun both MASK-FEST and Horrorhound Weekend have to offer.  Trust me, it is WELL worth it!

END_OF_DOCUMENT_TOKEN_TO_BE_REPLACED

It was a bustling Saturday at the 2018 Indianapolis Horrorhound Weekend and one could easily lose track of time in the immense ballroom I mentioned last time. Regardless, I was determined to attend at least a couple of the celebrity panels –  especially the one featuring some of the child actors from Stephen King’s IT.  Horror conventions are in no short supply of players from older projects, so I give Horrorhound props for boasting actors from 2017’s biggest horror blockbuster. The film debuted the same weekend as last year’s Indianapolis Horrorhound and none of us could have predicted how it would have smashed Box Office nor change the world of fandom. Somehow it destroyed all conventional wisdom and endeared us to a new Pennywise the killer clown despite the thankless job of filling in the footsteps of Tim Curry. In fact, I’ve yet to attend any genre event since that hasn’t had at least three cosplayers dressed as Bill Skarsgard’s new version. Unfortunately, Skarsgard was not in attendance here which was a pity since I’ve no doubt he’d of had conventioneers falling at his feet if he had.  Fortunately, most of the film’s “Loser’s Club” was here and willing to come together for a panel. I’m glad that Jason and I arrived early because that room was packed by the time Jack Dylan Grazer (Eddie Kaspbrak), Wyatt Olef (Stanley Uris), Jeremy Ray Taylor (Ben Hanscom), Chosen Jacobs (Mike Hanlon), and Jackson Robert Scott (Georgie Denbrough) walked in.

END_OF_DOCUMENT_TOKEN_TO_BE_REPLACED 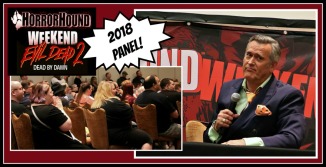 The following was transcribed from audio recordings taken at the Evil Dead II panel. It took place at the 2018 Indianapolis Horrorhound Weekend and consisted of Bruce Campbell (Ash), Kassie Wesley DePaiva (Bobby Jo), and Dan Hicks (Jake). Campbell, himself, acted as the moderator which made the occasion seem less a standard Q&A and more of a conversation between friends. The result was a hilarious 45 minutes that proved that after three decades the chemistry was still there.

END_OF_DOCUMENT_TOKEN_TO_BE_REPLACED

In many ways, attending the latest Horrorhound Weekend/MASK-FEST in Indianapolis was like a visit to an alternative Universe. For one thing, the huge gathering of horror buffs was taking place at an all-new venue; one that promised better parking and a larger layout to accommodate vendors and fans. For another, I was attending with a friend from Rhode Island who’d never done a Horrorhound Weekend before. Jason Schoolcraft joined me last year in Indy for Days of the Dead and assists me every so often with his “Killer Reviews.” We had a great time at “Days” and Jason loved having an opportunity to meet independent filmmakers which he hoped to continue to do at Horrorhound. For me, it was all about the masks.