The horror world experienced some excitement this past weekend with the anticipated release of SCREAM 4. You wouldn’t think the fourth entry of any horror franchise would generate much buzz but, then again, the SCREAM films aren’t your typical brand of horror. Not content to simply render their own slasher tale, these movies take things a step further by revealing the “formula” of the sub-genre itself. In pointing out horror’s less original concepts, SCREAM managed to become completely original!

I remember going to see the first SCREAM at the theater its opening night. At the time of its release, I was officially in the latter portion of my twenties. Suffice it to say, I was anxious to see a revitalization of the slasher films I had enjoyed during my teenage years which, as it so happened, was also the most prolific period of these films; the 1980’s.

Print created by Brian Maze – go to http://www.monkeygoatboy.com/ for these and other great original prints!)

It would soon become apparent, however, that I was not witnessing the “rebirth” of the 80’s slasher but rather the “death” of them. By the late 90’s, political correctness began to rear its ugly head, eliminating many of the exploitative practices that slasher film fans enjoyed.

At the same time, it was no longer acceptable to portray teen-agers as sex crazed, hormonally charged nit wits (another slasher staple). The success of SCREAM and TV shows such as BUFFY THE VAMPIRE SLAYER (which would also debut in the 90’s) illustrated that the public was more than ready to see teens portrayed as 3 Dimensional beings who, in many ways, were more astute than their denial-ridden parents.

Not your usual brand of victims

With this new sense of self-awareness came the novelty of SCREAM. Via the film’s resident horror buff, Randy Meeks, the “rules” of the genre were lain bare and, in one fell swoop, the 80’s slasher  (which had already been hanging on life support since the previous decade’s end) was given its official coup de grace. Ironically enough, this was done at the hands of  SCREAM director, Wes Craven, who also directed A NIGHTMARE ON ELM STREET (home to one of the 80’s most notable slashers – Freddy Krueger).

While SCREAM would close one chapter, it would briefly open another. As the Millennium turned, a new breed of slashers would enjoy a short run with films such as I KNOW WHAT YOU DID LAST SUMMER, URBAN LEGENDS, two more SCREAM films, and a host of horror parodies sparked by SCREAM spoof – SCARY MOVIE. This new-aged slasher era, however, would prove far less prolific than the previous one. A politically correct slasher is an inferior one (entertainment-wise) and once the man behind the curtain was revealed, the “Wizard” had all but lost his allure.

Quick to score on the first film’s success, SCREAM 2 was released the following year.

Now, over ten years after SCREAM 3’s release, a 4th installment has finally hit the big screen. The film brings back many of the previous trilogy’s cast along with fresh faces and a new set of “horror rules” to accommodate the current “Me” Generation of viewers. 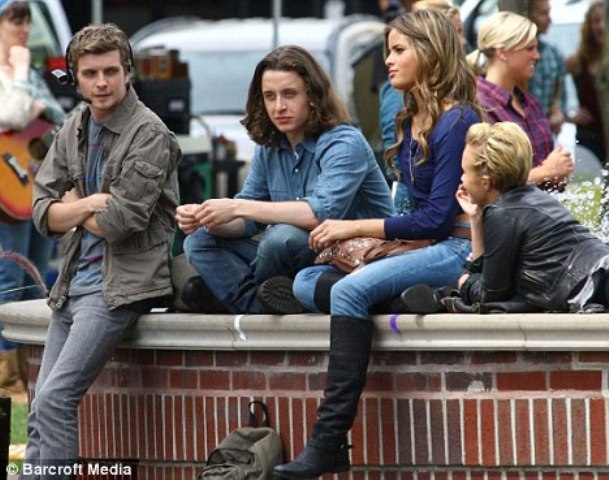 The new faces of SCREAM

Ironically, while the film does a great job at being “hip,” it was the older cast members that, for me, stole the show. Neve Campbell’s “Sidney” returns to Woodsboro. Having embraced her role as the town “victim,” she arrives to tout a new book she’s written on surviving. She’s even forgiven Courtney Cox’s overly ambitious “Gale Weathers” who had given her so much grief during the original trilogy. The same contentment can not be said for Ms Weathers (now Mrs. Weathers-Riley) who is finding simple/small town life anything but satisfying thus causing stress on her marriage to David Arquette’s “Deputy turned Sheriff” Dewey. 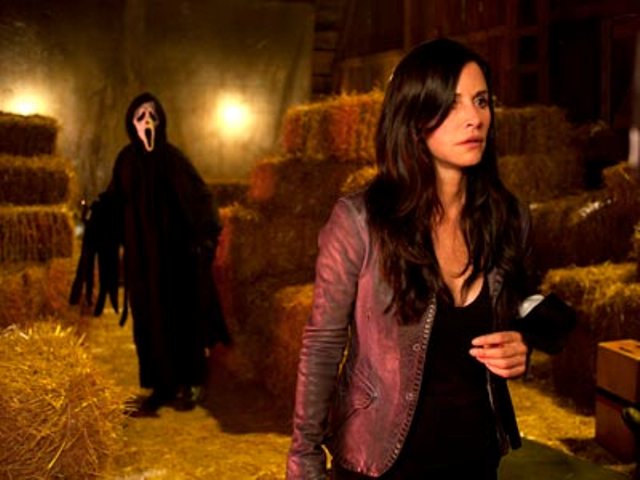 As one would surmise, the “ghost faced” killer also returns, testing the coping skills of Sidney and her surviving relatives, the mettle of the overwhelmed police force, as well as providing Gale Weathers-Riley with a new sense of purpose (and possible escape from her mid-life crisis). The film is clever and, while you suspect virtually ever cast member as being the new killer at one point or another, the ending was a genuine surprise.

This is not to say I thought the film was perfect. The film’s early “false starts” started to get annoying and the killer seemed to be everywhere at once, while always managing to get away without notice. Interesting that a film that seeks to call out the “horror” industry should blatantly feature one of its worst attributes; the disappearing and reappearing killer.” The film also tended to get confusing at times and I imagine when it’s released on DVD/Blu-Ray I’ll, no doubt, catch something I missed.

Though far from a masterpiece, the film was entertaining and I thought Courtney Cox (whom I didn’t care for in the original trilogy) was fantastic in this one.  While SCREAM dealt with the rules of horror, SCREAM 2 the rules of the horror sequel, and SCREAM 3 the horror “trilogy” – the newest entry focuses on the horror “remake.”  This may have been an error in judgment. SCREAM 4 made a paltry 19 Million at the box office its opening weekend (previous SCREAM entries broke 30 Million).  Perhaps some horror idiosyncrasies are just so obvious, that pointing them out becomes more redundant than original.