Berwyn, Illinois’ Route 66 Car Show didn’t just offer a slice of tasty Chicago pizza (courtesy of one of their sponsors, Paisans) but a slice of good ole Midwest Americana as well. Admittingly, my enthusiasm for cars is mostly utilitarian. As long as it gets from Point “A” to Point “B,” I don’t really care what it looks like. What drew me towards this event was the presence of MeTV’s national horror host, Svengoole. I do, however, have a genuine affection for the “Mother Road” – something I mentioned a few years back during a trip I took through the southwest. From 1926 until its fragmentation in 1985, Route 66 stretched from Chicago to Los Angeles; giving birth to the American road trip along with countless references in popular culture. Part of its charm (and the part I like the best) are the numerous novelties and pit stops peppered along the way. These attractions were designed to entice tourists and, thankfully, many of them still stand today. In fact, New Mexico and Oklahoma have recently begun restoring many of their old signage and landmarks. Despite living so close to where it all begins, I’ve been rather oblivious to my Chicagoland Route 66 heritage, and this Svengoolie appearance was the perfect opportunity to appreciate some of the histories in my own backyard. Ogden Ave (named after the city’s first mayor) was once part of Route 66 and runs straight through Berwyn; a city now famous beyond the Illinois border thanks to the chidings of both Jerry G. Bishop and Rich Koz’s Svengoolie. As a fan of Koz and an avid road-tripper, how could I resist the opportunity to celebrate boh…especially on a near-perfect sunny day like last Saturday?

END_OF_DOCUMENT_TOKEN_TO_BE_REPLACED 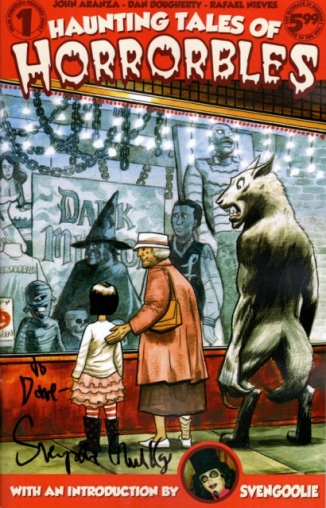 I hadn’t seen Horror Host, Svengoolie, descend upon Berwyn (a town he’s helped make famous) since he Grand Marshalled their “Houby Parade” last October (story HERE). I can’t recall the last time I’d seen him at their local treasure, “Horrorbles,” but I DO know that it was some time before I became a “Terror Dave.”  It couldn’t happen too much for me, as the two seem made for each other. Not only because the Horror themed store is the official supplier of Sven’s rubber chickens but because they are both hallowed horror institutions of Chicagoland.

END_OF_DOCUMENT_TOKEN_TO_BE_REPLACED

On the outskirts of the Windy City, with the Sears…I mean Willis Tower looming in the distance, lies the suburb of Berwyn. Its a town that made a name for itself for once having a giant garbage sculpture and spindle of cars as prominent local art. They even hold an annual parade dedicated to, of all things, mushrooms (courtesy of its Houby Parade which we covered HERE). Despite these wonderful things that give the town so much character, it would be  a horror host that would REALLY put them on the map, both here in Chicagoland as well as a national audience…