Last Sunday, I grabbed the kids and headed over to the town made infamous by the Svengoolies – Berwyn, Illinois – to observe a rather unusual event. The Annual “Houby” parade has taken place for over forty years now and, along with the National horror host, has become a local Berwyn tradition! For those scratching their heads wondering what a “Houby” is, it is the Czechoslovakian word for “mushroom.” Yes, you are reading this correctly, the entire parade is dedicated to mushrooms! Mushrooms and truffles are to the Czechs’ what the tomato is to the Italians. It is a big part of their culture and it should also be noted that other “Houby” events take place throughout the year in other places throughout the United States. 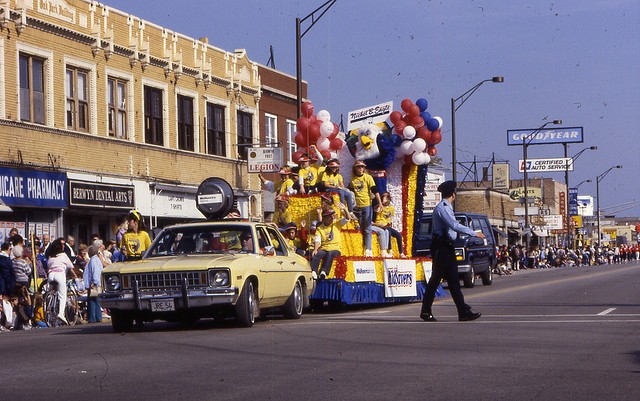 The Berwyn/Cicero, Illinois population is now predominantly Hispanic, but the tradition continues with a parade, festival, and presentation of the “Houby Queen!” While the identity of this year’s “Queen” may have been in question, there was absolutely NO doubt who its “King” was. This year’s choice for the parade’s Grand Marshall was none other than Svengoolie, himself!

This should come as a surprise to no one. Berwyn has become synonymous with the Horror Host who often uses the town as the butt of his jokes. This was started by the first Svengoolie, Jerry G. Bishop, and was no doubt adopted from his own horror host influence – Ohio’s Ghoulardi (who’d routinely poke fun at the town of Parma). This should not suggest, however, that there is any ill will behind these comments, nor the hilarious “Berrrrr-wyn” sound effect that finds its way into each Svengoolie show. Like the horror host who now gives them National name recognition, the town’s ability to poke fun of itself has made it all the more endearing. Berwyn is one of those towns that, watching The Son of Svengoolie, I always wished I had grown up in. There are few other communities in my native Chicagoland that even come close to having the character this town has. I remember driving through with my parents “back in the day” and seeing an immense sculpture made completely out of garbage! Another oddity found exclusively in Berwyn was a sculpture affectionately referred to as “The Spindle” which featured an eight car ka-bob that was built back when I was a teen. Sadly, both questionable pieces of modern “art” have been dismantled  – an action I personally feel was a mistake. 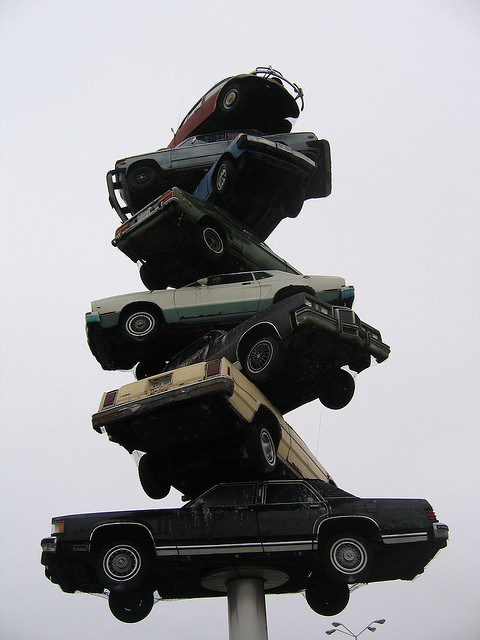 My car experiences a similar sensation each time I visit the pump!

I still love driving through Berwyn and checking out the old brick homes that, while technically in a suburb, are so very “Chicago” to me. Horror fans curious to check out Svengoolie’s “adopted” locale will also want to make a stop at “Horrorbles,” a store dedicated to horror collectibles as well as “official” Svengoolie rubber chickens!

David Albaugh gets the full Berwyn tour while visiting me in Chicago last March!

I parked my van by a McDonalds located on Cermak Road and Harlem Ave. My four kids and I joined hands and made our way down the busy street to where the parade would begin. As we found a spot to settle at, we noticed lots of parade goers proudly wearing their Svengoolie “It Came from Berwyn” T-shirts. My eldest son was wearing one too while I opted to wear the new “Chicken-thrower Bullseye” T-shirt I had picked up while visiting Svengoolie the night before (The Amhurst Asylum – see details of that experience HERE).

Svengoolie fans were well represented at the parade!

Grand Marshall Svengoolie was one of the first features of the parade (right after the military). Sven wore a red sash proclaiming his new title and happily blessed a few rubber chickens with a kiss, before tossing them to lucky parade-goers. I specifically wore the bullseye shirt so I’d have the honor of saying Svengoolie threw a rubber chicken at ME (yes, I have great aspirations in life). So, as the Horror Host made his way past, I yelled his name while slapping the bullseye on my shirt as an open invitation (not that my gut is a difficult target without one).

Jim Roche and Sven saw me and gave a thumbs up to the new shirt, though I didn’t get pelted. Apparently they didn’t see that I wanted to get hit with a chicken and must have assumed I was looking for fashion approval instead. While all this was going on I failed to notice that my youngest daughter, Jade, managed to snag a chicken of her own on street below. You can see the whole event in the clip below….

Jade proclaimed victory over her old man and we enjoyed the rest of the parade before venturing back to our van.I asked her if she felt like sharing her prize and her response was, “No way! I’m gonna get Svengoolie to sign this for ME!” Look for that future event someday soon…

We walked back down the bustling Cermak Road and I checked out some of the many vintage looking shops along the way!

Your hair will look so good, people won’t even notice that you’re naked!

Apparently I was paying a little too much attention to the shops and not enough to where I was going. As I headed towards a street crossing, a Berwyn police officer whistled. As he finally motioned for me to cross, he let the whistle drop from his mouth and yelled, “Hey! I love your shirt!!!” Clearly Berwyn, Illinois is the epicenter of Svengoolie fandom. The town knows full well that when we Sven fans are watching our favorite host…we are laughing with them and not at them!