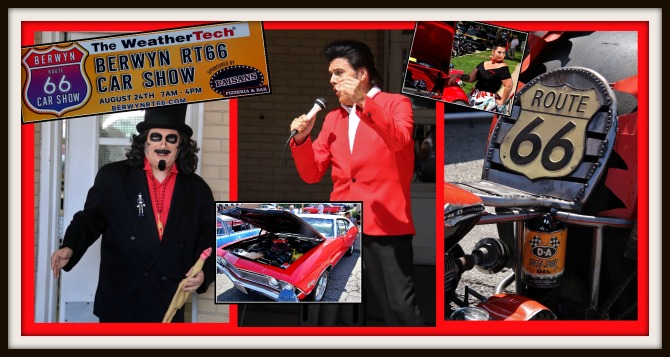 Berwyn, Illinois’ Route 66 Car Show didn’t just offer a slice of tasty Chicago pizza (courtesy of one of their sponsors, Paisans) but a slice of good ole Midwest Americana as well. Admittingly, my enthusiasm for cars is mostly utilitarian. As long as it gets from Point “A” to Point “B,” I don’t really care what it looks like. What drew me towards this event was the presence of MeTV’s national horror host, Svengoole. I do, however, have a genuine affection for the “Mother Road” – something I mentioned a few years back during a trip I took through the southwest. From 1926 until its fragmentation in 1985, Route 66 stretched from Chicago to Los Angeles; giving birth to the American road trip along with countless references in popular culture. Part of its charm (and the part I like the best) are the numerous novelties and pit stops peppered along the way. These attractions were designed to entice tourists and, thankfully, many of them still stand today. In fact, New Mexico and Oklahoma have recently begun restoring many of their old signage and landmarks. Despite living so close to where it all begins, I’ve been rather oblivious to my Chicagoland Route 66 heritage, and this Svengoolie appearance was the perfect opportunity to appreciate some of the histories in my own backyard. Ogden Ave (named after the city’s first mayor) was once part of Route 66 and runs straight through Berwyn; a city now famous beyond the Illinois border thanks to the chidings of both Jerry G. Bishop and Rich Koz’s Svengoolie. As a fan of Koz and an avid road-tripper, how could I resist the opportunity to celebrate boh…especially on a near-perfect sunny day like last Saturday? 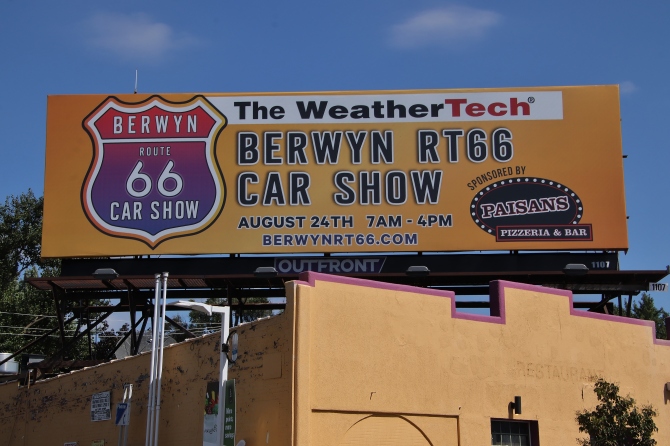 Since I had to drop my daughters off for work nearby, I arrived in Berwyn about twenty minutes before the show began. I decided to use the extra time to visit my favorite mom and pop hobby store, Berwyn’s Toys & Trains. The store carries import dinosaur models which I review on my other site, along with model train layout supplies I can use for my dino-displays. In their train section is an HO Scale layout with a miniature replica of the infamous “Spindle” sculpture that used to stand in Berwyn near Cermak Plaza. 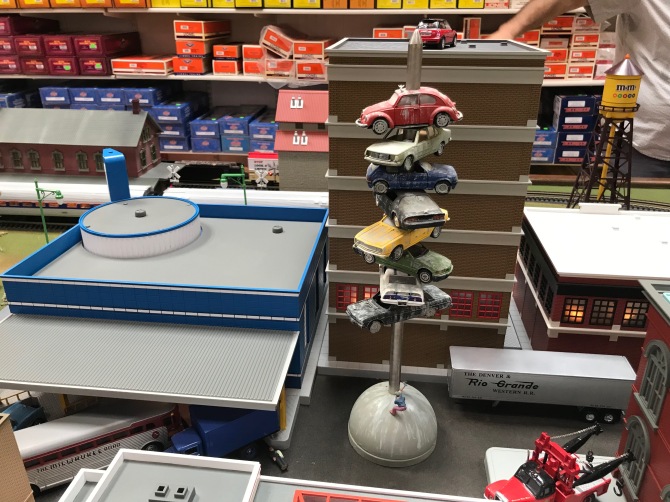 It was literally a bunch of cars spiked on top of one another and was seen on the cover of a book in 1992’s Wayne’s World. Since its creation in 1989, residents never could agree on whether it was a work of art or an abomination. This was already on the heels of a controversial “garbage” sculpture that used to stand there as well. Both have since been demolished making this layout more than just a train set but a local history lesson of sorts.

And you all wondered why Svengoolie pokes fun of Berwyn!

The store happens to be on Ogden Ave and just a few blocks from the show. By the time I walked outside, an entire section of the street had been shut down. I entered this free event from its west side and was soon immersed in classic cars. Standing behind them was their proud, yet anxious owners awaiting the judges. 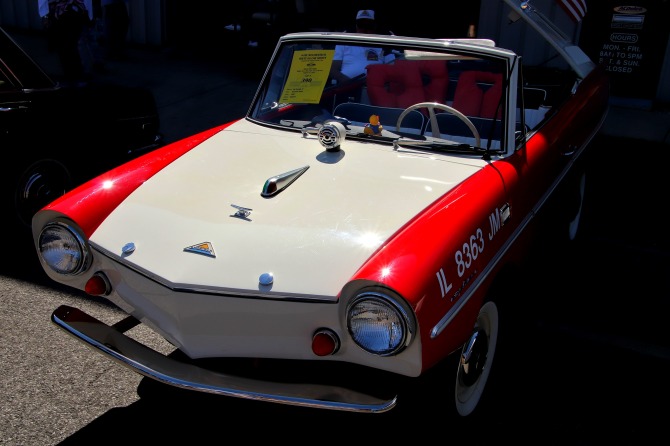 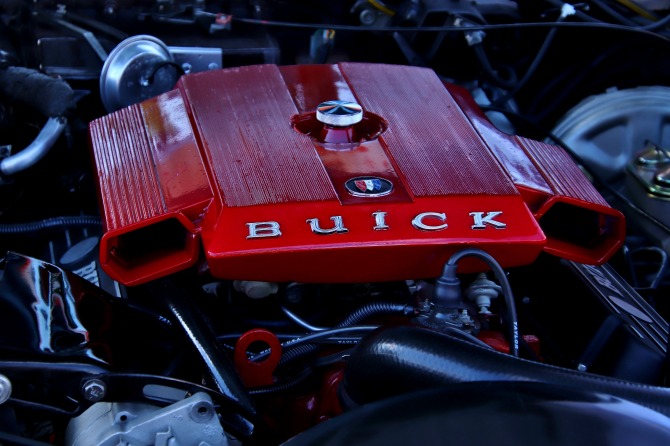 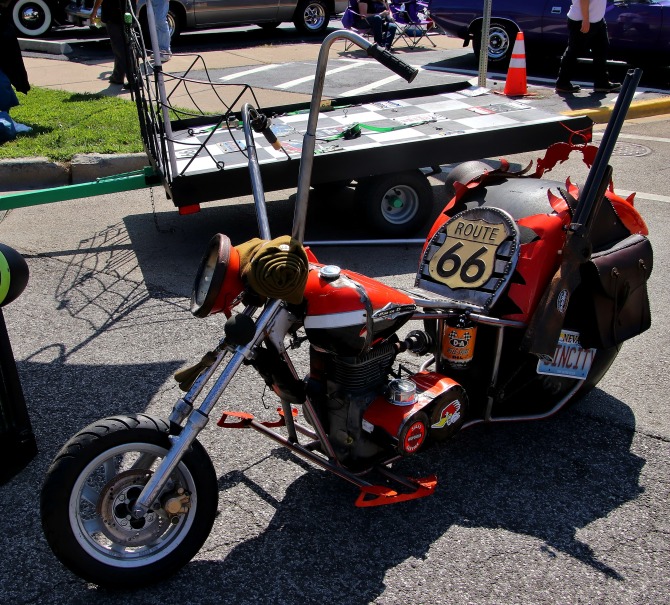 The atmosphere was very friendly with lots of smiles – evidence of the warm nostalgia these cars evoked.  There was even a local church group handing out free bottles of cold water to everyone who walked by.

I was raised in the ’70s but have always been drawn to the colorful ’50s and ’60s. I appreciated getting a glimpse of yesteryear via these old cars and outdated features such as food trays attached to the windows for drive-in restaurants. 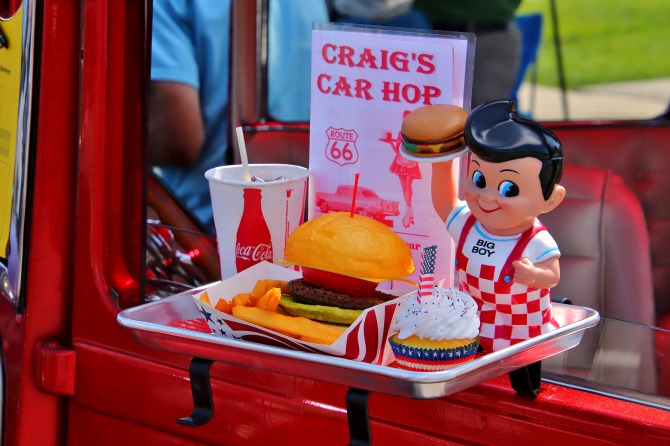 Some cars had their hoods popped open revealing pristine engines that, dare I say, looked like works of art. Some participants even displayed model replicas of their car inside – one even featuring a full diorama of a vintage gas station. 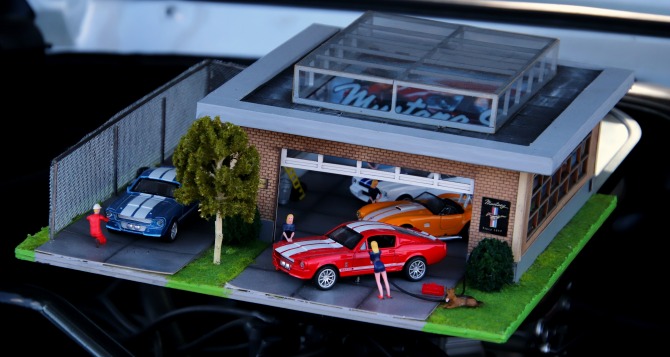 I also enjoyed seeing older generations pass along their passion for their kids. I was particularly moved by one dad I saw teaching his enthusiastic young daughter about the old vehicles. “Is that a dragster, daddy?” she asked. “Yes, it is!” he proudly affirmed. It was a wonderful moment – not just the sharing of knowledge from one generation to another but that it was no longer a conversation reserved only for a son. 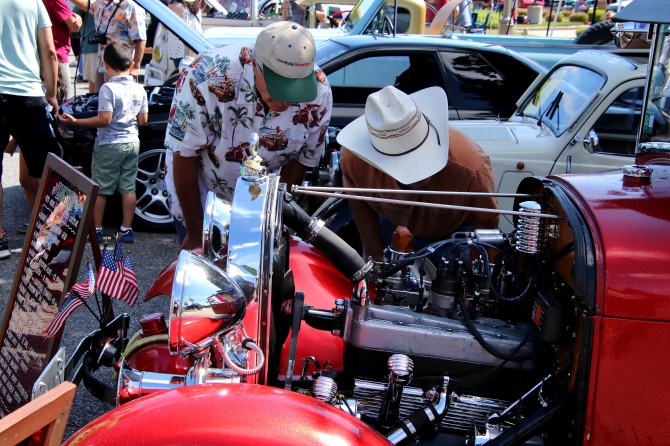 After checking out all the cars, I asked someone where Svengoolie would be appearing and was directed to the Ogden Top and Trim; a car upholstery shop celebrating its 100th year. During the dozens of times I’ve passed through Berwyn, I had no idea how much history was around me. Looking at the good people and businesses of Berwyn, it was clear that Route 66 could not have had a better starting point.

I had no trouble finding the place thanks to a familiar lady sitting in front. It was none other than Svengoolie super-fan, Lynn, whom I just mentioned in my last Flashback Weekend Diaries post. Once again, she was in line hours before the horror host’s arrival. I thought when she saw me she’d smile with recognition but instead, she looked panicked. “Please, let me be the first in line!” she snapped as if I was about to cut in front. “I’ve been here since 10 AM, sitting in the sun, and I’m afraid I’m going to pass out!” I’m guessing it was because she saw me helping out at the last event and assumed I’d be shown favoritism. For the record, even if I was of importance (which I’m not) nobody gets preferential treatment at a Svengoolie signing. Even when he’s signing at a convention like C2E2 and a celebrity drops by to see him, he always asks permission from the next person in line before greeting them. 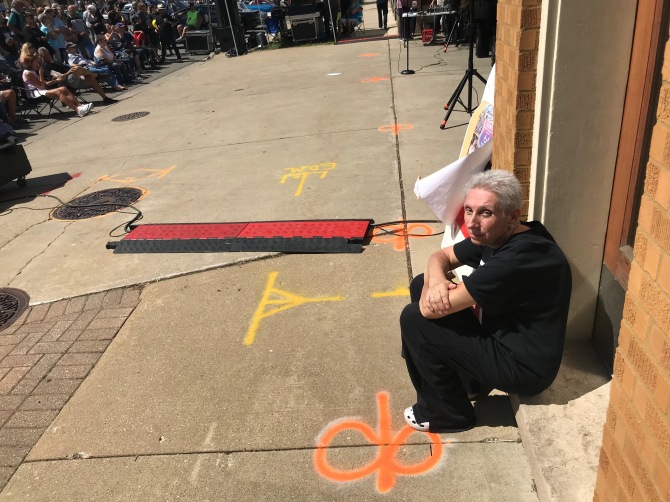 I told her that only was her spot safe but I’d hold it for her if she’d please go stand under a nearby shaded canopy. We switched off the rest of our wait time. And so far as waiting goes, we weren’t starved for entertainment either. The Top and Trim featured a full Elvis concert courtesy of local impersonator, Rick Saucedo. Rick put on an amazing show featuring hits from every stage of Elvis’ career. And he sounded just like him, too. My parents were big Elvis fans and I grew up listening to him reverberate the walls of our modest suburban home just about every weekend. Elvis died two weeks before my little sister was born and they named her Lisa Marie like his daughter – though my mother insists she was going to name her that all along and there was no connection (which nobody believes). When he sang his “Glory Glory Hallelujah” number, I’m not ashamed to say that he not only got me “all shook up” but choked up! He seemed to perfectly capture the King of Rock n’ Roll’s patriotism at a time when there is so much divisiveness permeating the world. 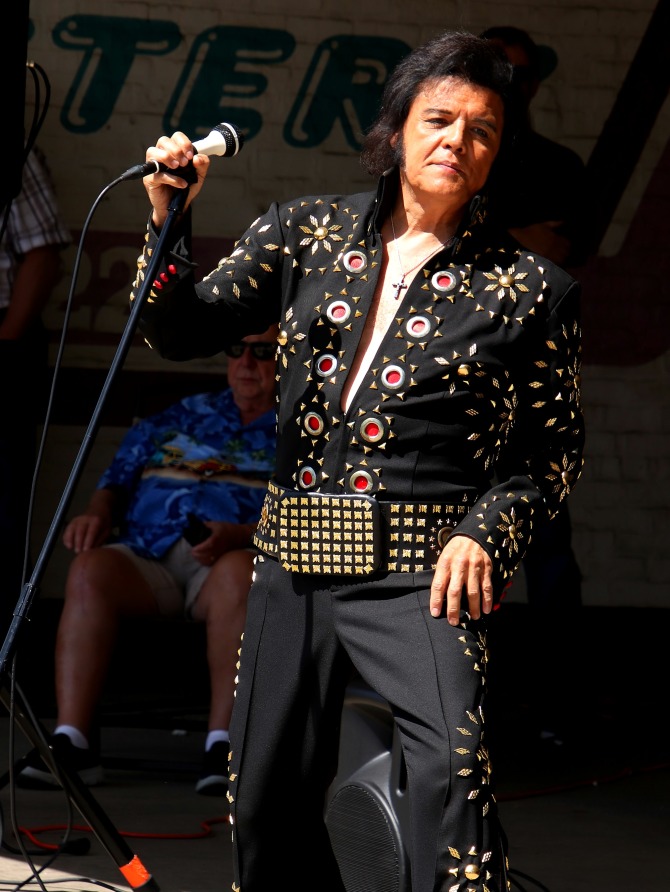 Lynn, however, was unimpressed. When Elvis took a break for a costume change, she turned to me and said, “I don’t care about any of this…I want Svengoolie!”

Lynn…unimpressed with the King of Rock n’ Roll

“Well, he ain’t getting here till 2 PM so sit back and enjoy the show!” I said.

By the time the concert ended, a line of Sven fans were behind us. There was a nice family next to me who mentioned how they’d met him at this event last year and how nice he was. While he was talking to me, another man comes out of nowhere telling them he went to high school with Rich Koz and hadn’t seen him in years. When asked if he was as funny back then as he is now, the man said, “Yes, he was exactly like that!” And proceeded to tell stories of some of the things they did together.

Svengoolie was running a bit late which sent Lynn over the edge with worry.

Me: See all these people behind us wearing Svengoolie shirts? We’re in the right place, Lynn.”

Lynn: I’m just so nervous about seeing him I can barely breathe! (clutches her chest for emphasis)

The mom from the family behind me approaches her. “Aw, honey, that’s so sweet! Is this the first time you’re meeting Svengoolie?” she asked

At a loss for words, the woman casually walked back to her family. Then I noticed another couple who somehow managed to be first in line despite Lynn and I standing there for the last three hours. And somehow the male unit of that couple was even more annoying than Lynn! He kept pacing around complaining about how Svengoolie probably wasn’t going to show up or that he was signing elsewhere. These comments were not only irritating but kept unraveling Lynn despite my best efforts to calm her.

Man: Well this is ridiculous. They said 2 PM and now its 2:10. Obviously, he’s signing somewhere else!

Me: See that guy over there checking out the line? That’s his producer, Jim Roche. SVENGOOLIE KNOWS WE’RE HERE!!!

Man: Well this is very irresponsible of him not being out here on time and nobody explaining things to us. I should complain.. I should…Oh my God!!! There’s Svengoolie!!!! I can see him through the window!!!!! Look, everybody, it’s Sven!!!!”

I resisted the urge to punch him.

Seconds later, Jim began firing up the crowd. And when I say “crowd,” I’m not talking about the people standing in line behind me (which now reached around the block) but the mob of folks standing outside the line and in front of the store. Lynn went into a frenzy. “SEE! I told you!!! These people are all going to cut in line!!!”

Between Lynn and that man in front of us, it’s a wonder I didn’t have an anxiety attack at this Svengoolie signing.

What I saw in front of me…

What I saw behind me…

Jim coaxes the crowd into shouting “Berrrrrrrr-wyn!!!!” and Svengoolie makes his entrance.

When Lynn finally made it to Svengoolie she grabbed his hands and started pleading with him as if he were the Pope. I couldn’t make out what she was saying but it sounded like she was apologizing for being overzealous while he was doing his best to reassure her everything was fine. Poor Svengoolie. The man must pop valium like Tic Tacs after every appearance thanks to his goofy fans.

And when it was this goofy fan’s turn, I had him sign my Svengoolie poster before posing for a picture with that stupid rubber chicken costume I mentioned in the Flashback Weekend Diaries. You know, the one that wilted during my photo op? Thankfully, this time my chicken’s “comb” stood tall!

As I left Svengoolie, I looked back at the fans swarming the building on both sides as if the Top and Trim were under siege. I was eager to get back to my own, less-flashy car and head to Brookfield Zoo for a beer event with my friends. And, BOY, did I need a drink! It was definitely high time I got off this “Mother Road” and swapped classic cars for a pint glass… 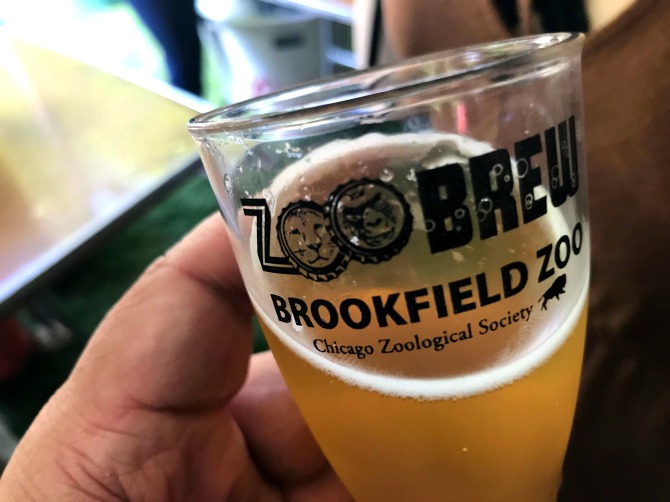 2 thoughts on “Driven Crazy at the Berwyn Route 66 Car Show!”