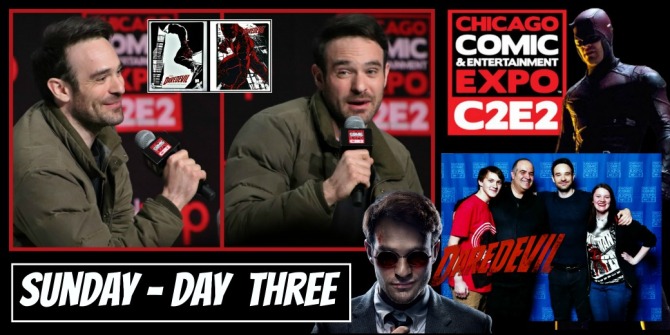 9:45 am – I arrive at the Chicago Comic and Entertainment Expo (C2E2) with my two youngest kids, Jade and Luke. Luke is taking my older daughter, Leia’s, spot today and this is the first time he’s been to a C2E2 in six years. What inspired his decision to join us today? Well, that would be Charlie Cox a.k.a. Daredevil of course! The star of the Netflix series only appeared Sunday and we were determined to get the most out of it – pre-paying for autograph tickets as well as his photo op. As I mentioned in my C2E2 Friday post, you gotta knock the autographs out of the way first thing, and ours was scheduled for the earliest group. 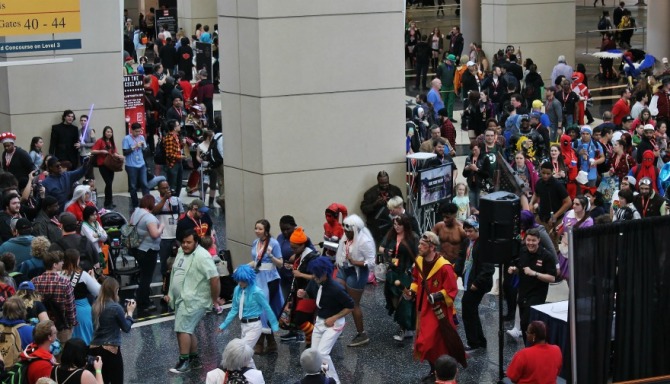 10:05 am – We make it into the main hall and Luke (an Iron Man fanatic) checks out some related merchandise. We also snapped a few photos of cosplayers, too. Luke asks why there are always so many Harley Quinns…a darn good question! 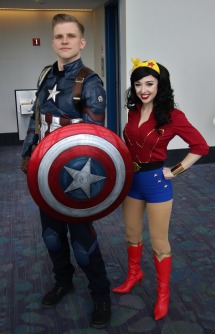 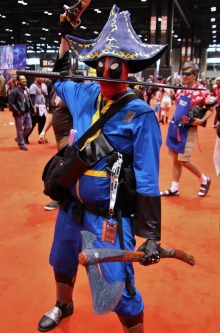 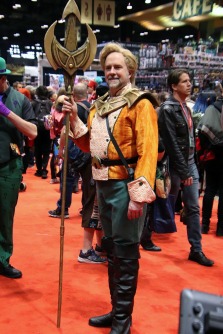 10:10 am – We get in Charlie Cox‘s autograph line (the same spot we met Dave Bautista on Friday). The line is already a monster; broken off into segments and we find ourselves in the fourth one. I’ve brought along my Daredevil Season 1 & 2 import Steelbooks for signing and received compliments on them. I was feeling pretty darn proud of myself until I noticed a guy in one of the other lines carrying an authentic looking Captain America shield loaded with signatures from at least twenty Marvel cast members. I then spend several moments fantasizing about grabbing that shield, knocking him over the head with it, and racing for the door.

10:30  – 11 am – Charlie Cox arrives somewhere around this time and the line starts to move. We assumed with him being here only one day and having such a tight schedule that the rules would be as rigid as Bautista’s but this was far from the case. You’re totally allowed to take cell phone shots of him signing which was awesome because if you brought out a camera near Bautista it was practically punishable by death.

11:15 am – Charlie Cox was, without doubt, one of the nicest celebrity guests I’ve ever met. In sharp contrast to his brooding famous character, this man is like the image of happiness. With a big smile, he made a point to ask all our names, shake our hands, and tell us how happy he was to meet us. We asked him if he could pick any MCU hero to team up with on his series who would be. “Definitely Chris Evans!” he said. I think Daredevil and Captain America could kick some serious butt in Hell’s Kitchen!” Jade asked him which of The Defenders was his favorite to work with and he said, “I love working with them all but Krysten Ritter (Jessica Jones) is a close friend and just one of the most amazing people to work with.

11:25 am –  With about 45 minutes to kill before our scheduled photo op, we go back to Artist Alley to see Chris Claremont whom I’d met the day before. This time I showed up with my X-Men omnibus books in tow (heavy, but at $5 an autograph, well worth the muscle relaxants I had to take later). 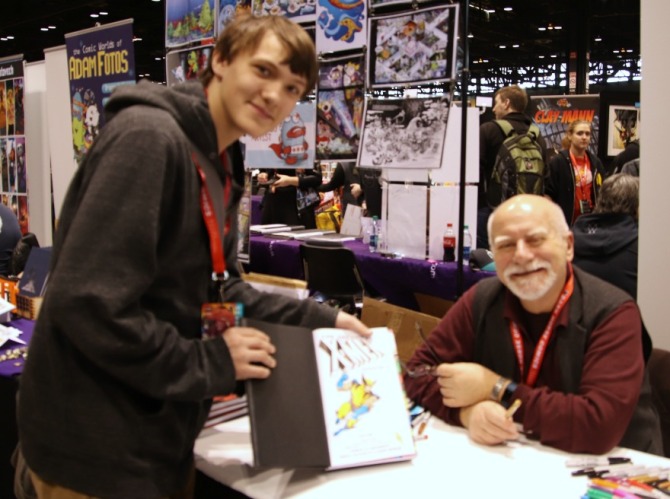 11:45 am  – We arrive at the Photo Op area earlier than expected. It was then that I spotted one of the most beautiful and rare sights one can ever hope to see at C2E2….empty chairs! We rested our legs awaiting the line formation for Charlie Cox, savoring every moment of inertia.

12:40 pm – We get our photo with Charlie. Once again he’s beaming a huge smile; shaking our hands and addressing us by name. Thankfully, they have a spot where you can stow your personals until after the photo op which, considering I was lugging around over 50 pounds of omnibus books, was a genuine blessing. C2E2 has the most well-oiled machine when it comes to their professional photo ops. As soon as we retrieved the stuff our picture was ready and someone quickly scanned our original ticket voucher to make sure it matched the photo. 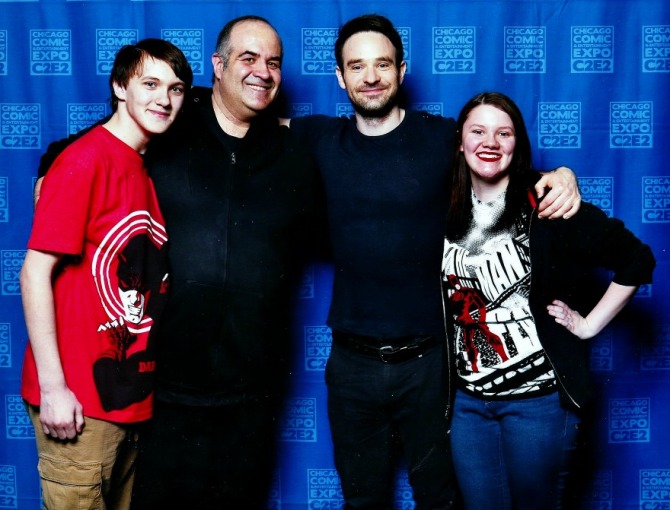 12:50 pm – Jade takes off on her own and Luke and I go back to the car to drop off the omnibus and Steelbooks. We now have the afternoon to relax a bit and casually walk around.

12:50 – 3:20 pm – Luke and I eat some snacks we’d packed while indulging in free samples of that Mutant drink I mentioned in my last Svengoolie post. Luke wanted to go back to Artist Alley and look at some of the prints. While we’re there I spotted a comic featuring dinosaurs and stopped to talk with the artists. I’ll feature that blurb on my other site, Dave’s Dinosaurs and Prehistoric Pit Stops.

3:20 pm – We decide to go ahead and get seated in the main Q&A hall for The Daredevil You Know: Spotlight on Charlie Cox panel scheduled at 4. The decision to get there 40 minutes early was based on a) wanting to get a good seat and b) just plain wanting to sit down! Already in progress was a panel featuring Milo Ventimiglia and Justin Hartley from This is Us. I’ve never seen that show before but was familiar with Ventimiglia from his role in Heroes. The panel is hosted by Clare Kramer a.k.a. the mighty Glorificus from Buffy the Vampire Slayer Season 5.

During the Q&A some gal asks if Ventimiglia would take his shirt off for her friend who was too shy to ask themselves. Although polite,  the actor was clearly unamused which created one of the most awkward moments at any panel I’ve ever attended. He stumbled through a response that was basically (and I’m totally summarizing here)  – With today’s current state of affairs concerning sexual harassment, you may want to exercise more common sense before asking a someone who isn’t your significant other to take their clothes off.

4 – 5 pm – The Daredevil You Know: Spotlight on Charlie Cox to be highlighted in my next post.

5 pm – The panel ends and C2E2 2018 is officially a wrap. Luke and I walk around another twenty minutes. 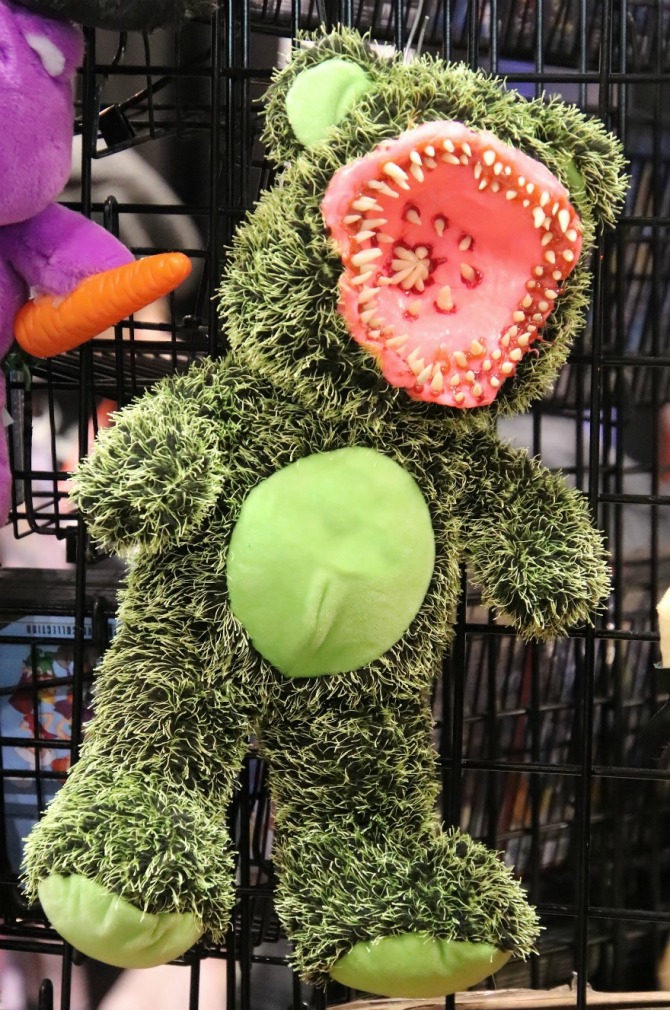 before meeting back up with Jade and heading home. It’s our tradition to wrap up a Chicago convention for deep dish pizza and “pop” (that’s “soda” if you’re an outsider) and talking about our favorite parts of the event. Luke said he wanted to return next year and Jade and I agreed this was the best Chicago Comic & Entertainment Expos we’ve ever attended.  Lucky for us, C2E2 is scheduled earlier next year in March – hope to see you there!