Friday, April 6, 2018, 10:15am – My daughters, Leia and Jade, and I arrive at McCormick Place just after the Chicago Comic & Entertainment Expo (C2E2) begins. This year they had security checkpoints set up like the ones they have at airports which created some delay. While approaching the metal detectors, I notice a Wonder Woman cosplayer in front of me holding a sword and a guy behind me with a laser gun. I swear this is the only Security Screen in history where folks walk in proudly brandishing weapons! 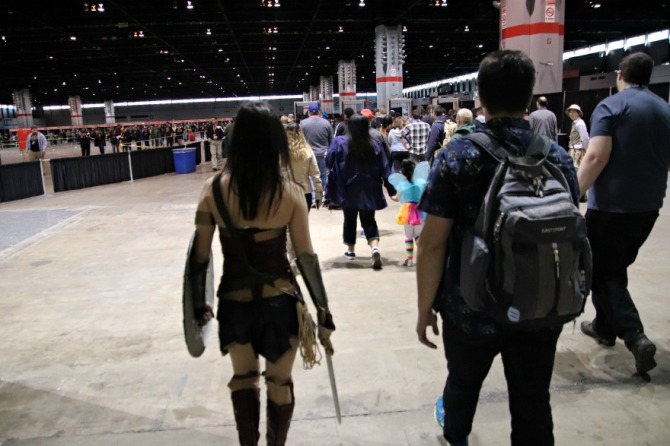 10:25 am – We finally enter the main hall. Since the primary goal for Friday was celebrity autographs, we made a beeline for that area while trying our darndest not to stop and check out the merchandise. Instead, we quickly snap photos power-walking towards the back of the hall. 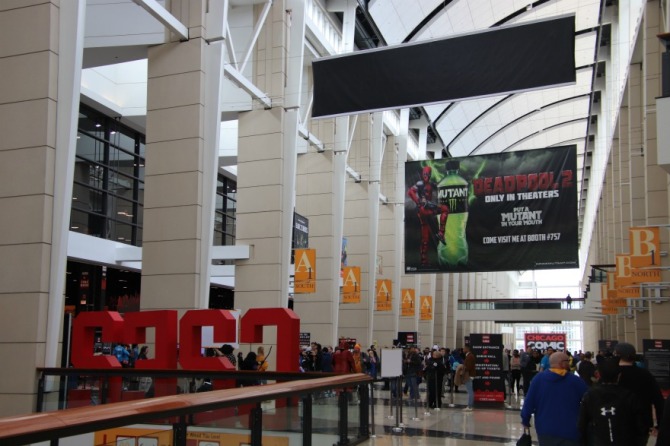 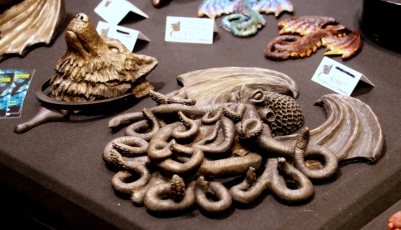 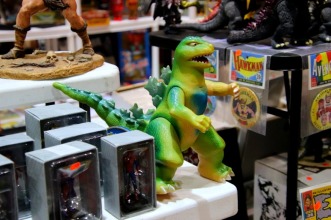 10:45 am – We arrive at the autograph area and notice the lines have already formed for most; including Dave Bautista (“Drax” from Guardians of the Galaxy) who wasn’t scheduled to start until noon. We decided to strategically split up and have Jade secure a spot in Bautista’s line while I go to Sean Gunn’s and Leia (a huge Firefly fan) wait for Alan Tudyk. Both Gunn and Tudyk were scheduled for 11am which worked out well since I wanted Gunn and Bautista to sign the same Steelbook.

Cosplayers prepare for battle as C2E2 gets underway

11:05 am – No sign of Gunn nor Tudyk. Tudyk’s line is huge and the only way I manage to spot Leia is because she wore an orange Scooby-Doo “Thelma” sweater. Jade sends me a text stating that due to Bautista’s tight schedule fans are being told they can’t ask him any questions nor have him personalize anything. I should note that while Bautista was signing at various times, this particular session was only an hour since he had a panel to get to at 1. Things may have been more relaxed later in the weekend though I can’t say for certain.

11:45 am – My turn to meet Gunn. I ask him what it’s like being a part of the Marvel Cinematic Universe and he said it was “amazing” but they’re held under such tight secrecy they can’t even say the first names of anybody they work with. I ask him if he’d been a comic book fan growing up. “No, that was my brother (Guardians of the Galaxy Director, James Gunn),” he said. I asked if he read both Marvel and DC and Gunn said, “No, he was always a Marvel loyalist.” At $40 for an autograph/photo combo, Gunn was not only friendly but one of the more affordable celebrities in attendance. 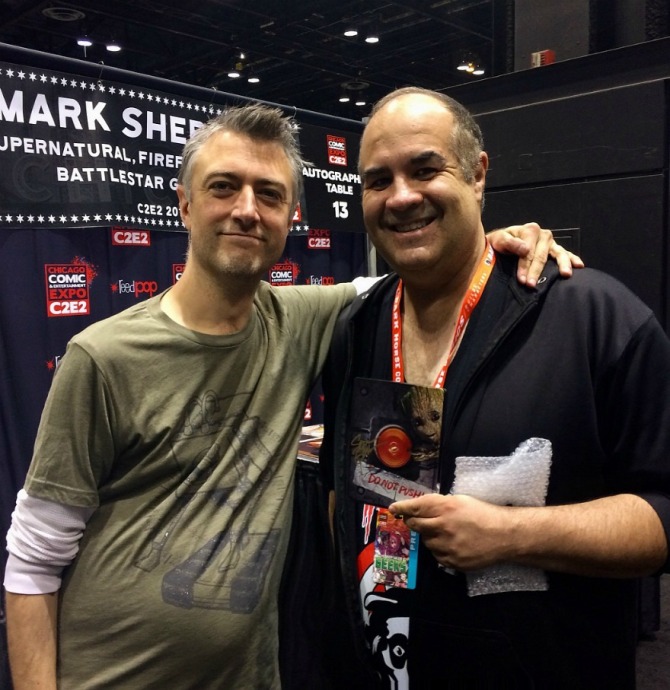 11:55 am – I join my daughter, Jade, in Bautista’s line (and notice several people I’d stood with in Gunn’s doing the same thing). The security and volunteers running this area are confused, confusing, and wound so tight you can cut the tension with a knife. There were several lines formed and Bautista would sign each line, one at a time. Jade and I stood at the head of the second line which meant we got front row watching Bautista sign for the first one. Some weird volunteer guy keeps feeling the need to explain to me the dynamics of the line and why it’s set up the way it is. I just keep feigning interest while saying, “Uh huh…..”

Noon – Bautista shows up right on time. He’s a big guy, wearing sunglasses, and looks like a badass. I’ve met quite a few pro wrestlers but this guy’s the most intimidating of them all. NO WAY could Ryan Gosling take him out like he did in Blade Runner 2049! I wonder if weird volunteer guy will hold my hand when it’s my turn to go up there?

12:20 pm – We find ourselves in front of “Drax,” himself. Despite appearances, Bautista was very friendly. He asked what color I wanted my Steelbook signed and I chose blue – for Drax of course!

“Guardians of the Galaxy” goals reached!

12:35 pm – Jade and I catch up with Leia who finished her encounter with Tudyk and couldn’t be happier with it. She told him she loved Firefly and he was in the middle of saying “Thank you” when he stopped and noticed my Tucker and Dale vs Evil import Steelbook I gave her to have signed. “Holy, crap! Where did you get this??? It’s awesome!” Leia recalled him nearly jumping from his chair. “I love how they have me out front in this picture. You know, if it were up to my co-star, that movie would have been called “Dale and Tucker vs Evil!” He also loved the import Rogue One KIMCHIDVD exclusive Blu-ray Steelbook as well (I’m like a rich lady with shoes when it comes to Steelbooks). “Wow, I can’t believe they’ve got me (STAR WARS droid K-2SO) taking up the cover! I need to find out where you people go shopping!” This made me really happy as I specifically bought that Steelbook with him in mind. 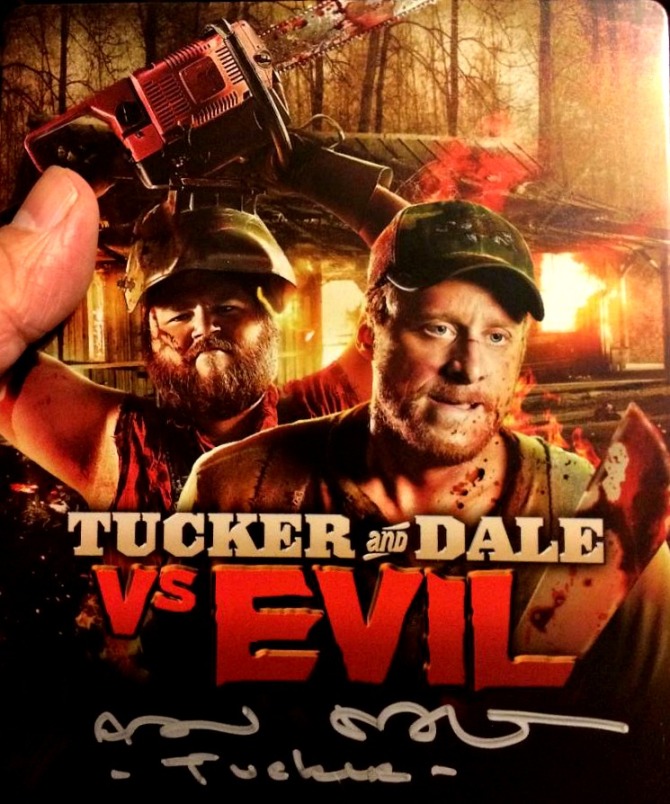 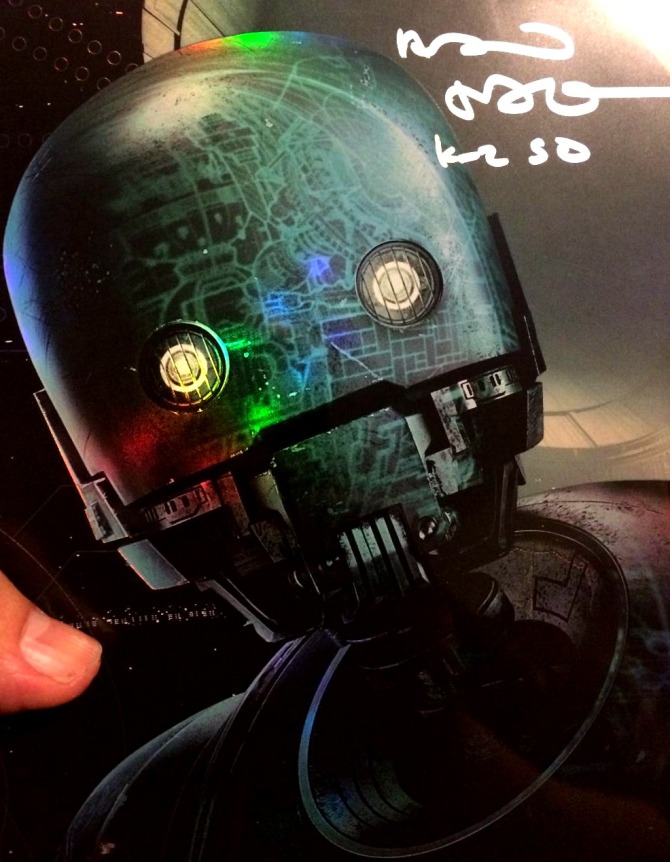 1:06 pm – Svengoolie’s producer, Jim Roche, sends me a text that they’ve arrived and the girls take off on their own while I wait for them. I chat with a few people in his line at Booth 34 who’ve arrived a full hour earlier to wait for him. This includes a casual Facebook friend of mine named Vicki who walks up and shows me my profile photo on her phone. “Is this you?” she asks.

3:45 pm – Met back up with Leia before her and her friend attend a D&D panel (we’re all geeks in my house and C2E2 is like our Mecca). Jade is also attending one – upstairs for the Guardians of the Galaxy. She’s also a huge “Buffy the Vampire Slayer” fan like her old man and was thrilled to see that Clare Kramer (“Glory” from Season Five) is hosting it.

4:00 pm – I go off on my own; checking out the vendors despite my aching feet. My goal was to find superhero patches but I end up buying new horror-themed ones instead. I note a few other items I’m interested in but decide to hold off. I figured if I still want them after a good night’s sleep, I’ll pick them up Saturday. I’d read this was a great way to be more frugal and avoid impulsive spending.

Unfortunately, the following day I ended up purchasing every single one of those items so I’m not sure it worked.

4-6 pm – We’re all out in the convention doing our own thing; shopping and taking pictures of cosplay. Here are some of those shots… 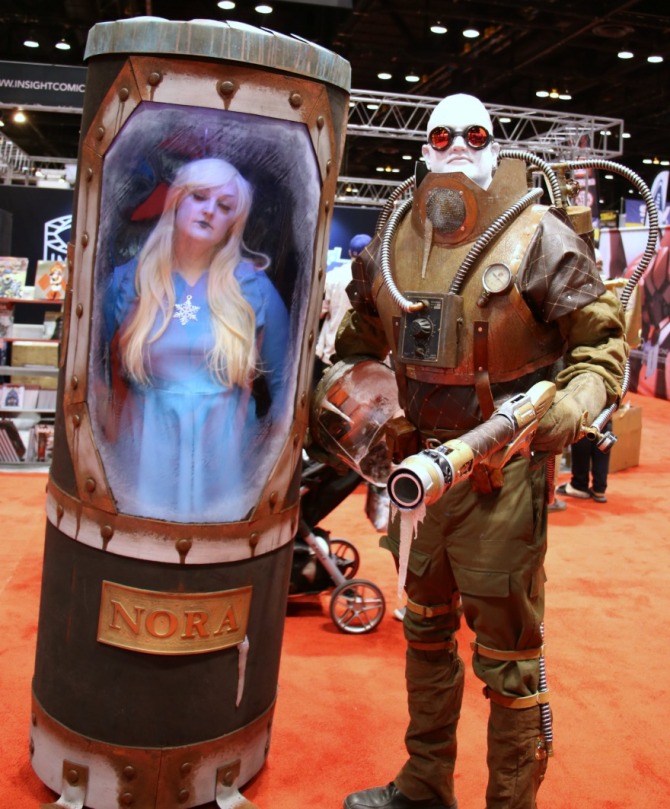 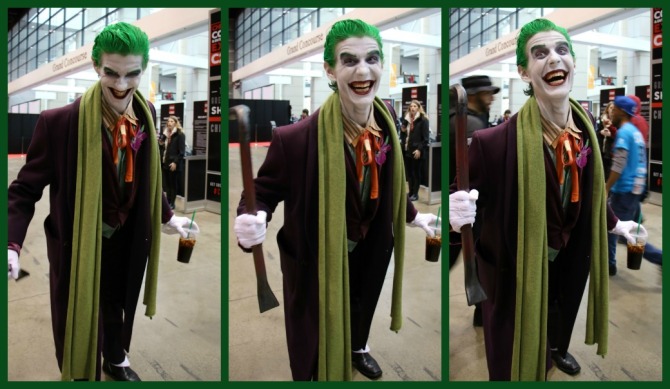 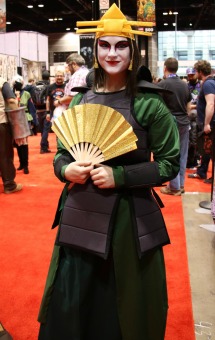 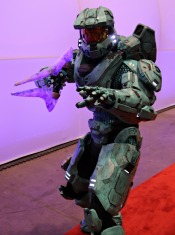 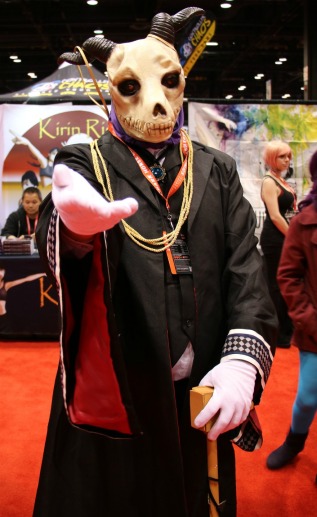 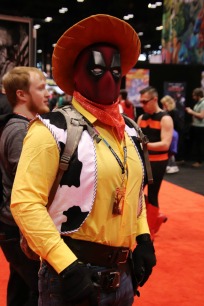 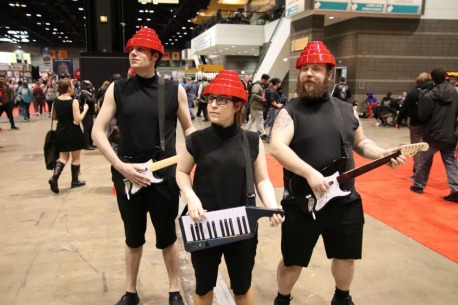 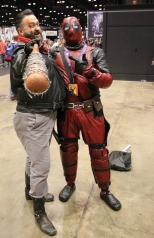 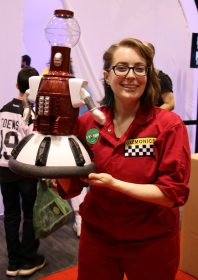 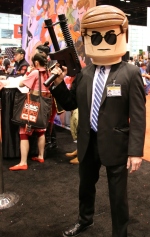 6:00 pm – We all meet at our rendezvous point a.k.a. the Marvel section and pick up some of their free swag. They have a giant poster of Avengers Infinity War which I can’t believe will be out in just a couple more weeks (and, yes, we have our tickets). In celebration, the Marvel folks give everyone a turn posing with the Infinity Gauntlet.

6:15 pm – We trudge back to the car. Day One’s a wrap and with all our Friday goals achieved. I drop Leia off at her friend’s place and Jade and I pick up Chinese food before heading home. As I walk from the car to my front door my legs hurt so bad I start fantasizing about crutches. There was nothing scheduled for us on Saturday outside of my meeting with the Svengoolie crew again around noon. I set my alarm for 8:30 am and looked forward to sleeping in a bit and rest my sore legs/feet.