10:20 am – We’re back in the main convention hall of the Chicago Comics & Entertainment Expo (C2E2) at McCormick Place. My daughter, Leia, and her friend, Rachel, take off on their own while my other daughter, Jade, heads over to Cosplay Central with me. This zone, designated for cosplayers, has space for their elaborate costumes, photo backdrops, and even panels on this topic throughout the weekend. The first thing that caught our attention was a tall monster that looks like a composite of Sil from Species, Giger’s ALIEN, and the Balrog from Lord of the Rings! I have no idea how someone even begins to create something like this let alone moves around in it! If you have any doubts about cosplaying being a legit artform, then I strongly urge you to come to C2E2 for some clarification. 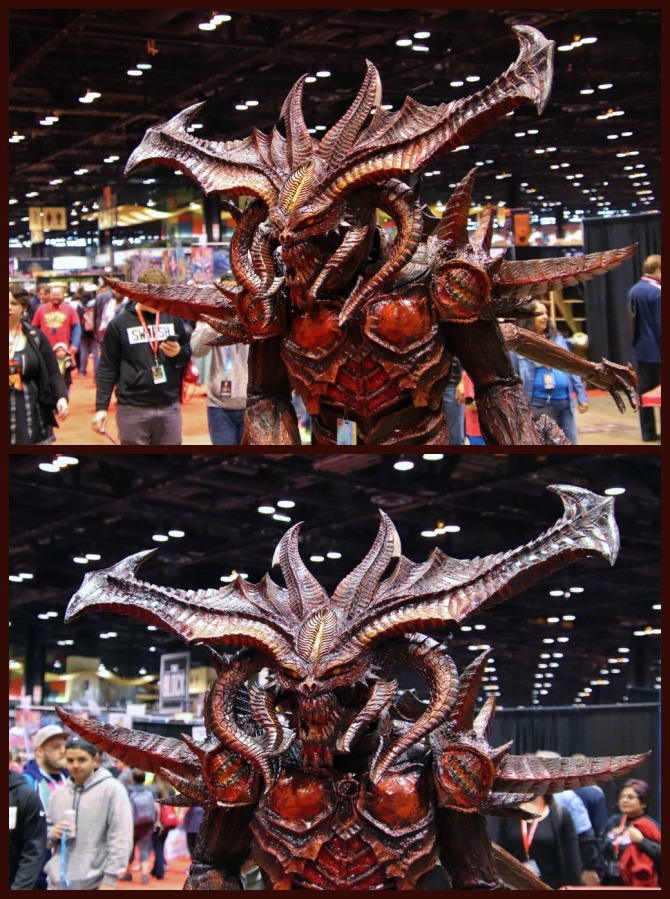 10:30 – 11 am – Having found the perfect spot, we stay at Cosplay Central an additional 30 minutes taking pictures. If your primary goal for C2E2 is photographing costumes, pack a lunch and just spend your weekend here. Trust me, your memory card will be full without you even having to walk more than fifty feet. 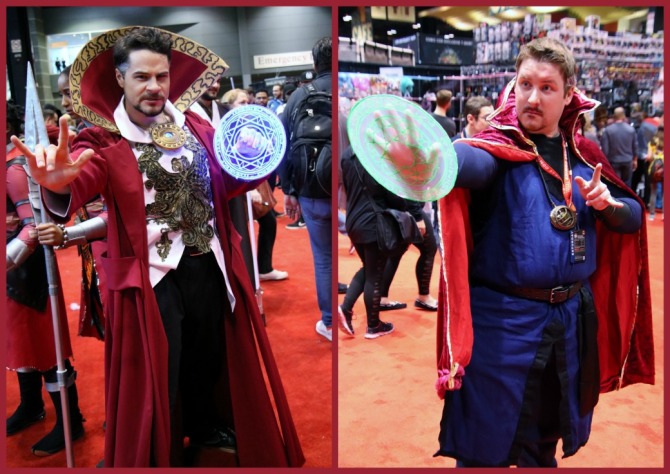 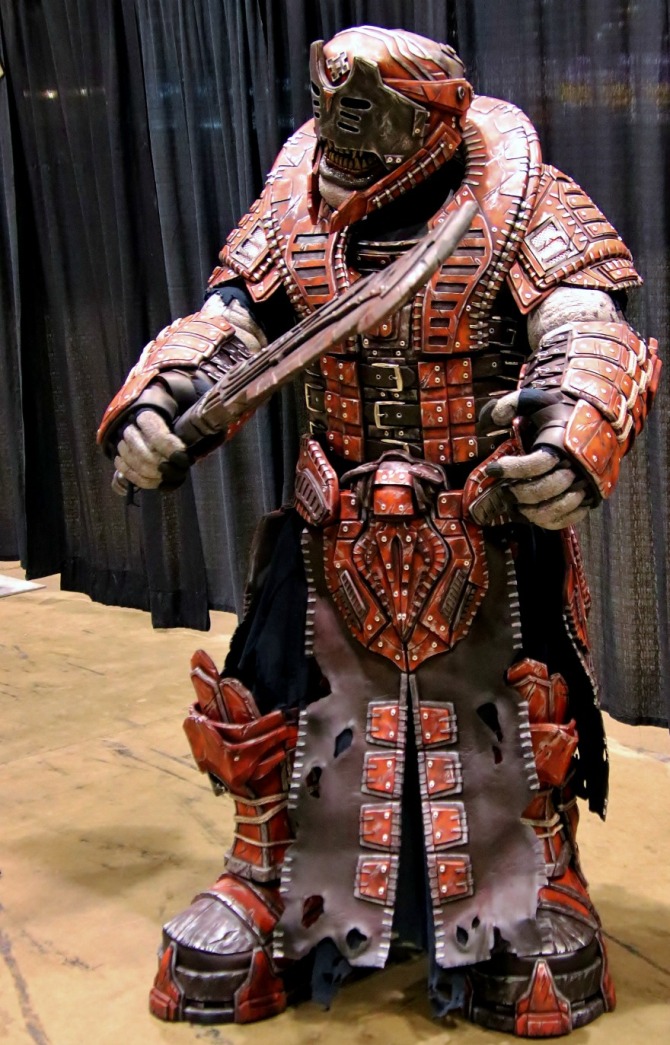 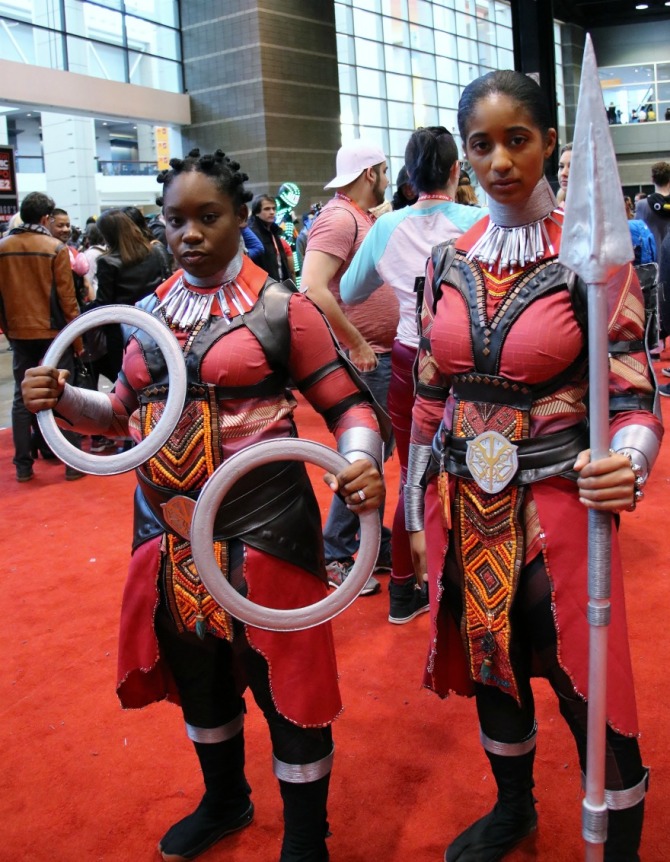 11 am – Jade and I go back out to the vendors to do a little shopping and seek out the ones who caught my interest the day before. Unfortunately, the place is so huge we spend most of it running around in circles. Finally, I spot one of them – artist Billy Ludwig’s Thirteenth Floor. This guy does some incredible things combining vintage photographs with modern popular culture. I particularly loved his UFO-related stuff (being the kind of guy I am) and his STAR WARS/World War II mash-ups. 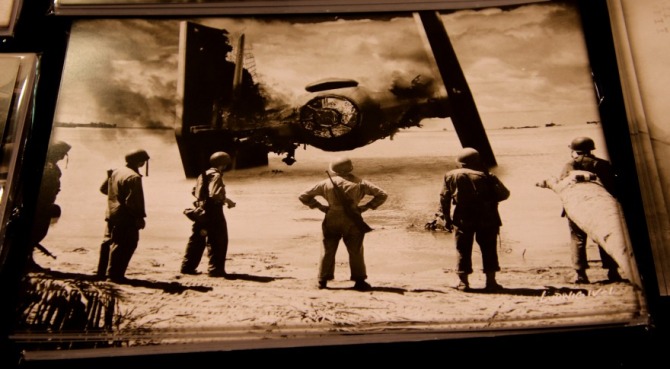 He was offering C2E2 guests a great “Buy Two/Get Two Free” deal which we couldn’t pass up. Jade loved some of his creepier “Vaudville Phantoms” creations while I (naturally) gravitated towards the flying saucers. Between the two of us and Ludwig’s killer bargain, we walked away with several prints for our new place (and I got myself a new UFO T-shirt too).

11:27 am – I receive a text from Svengoolie’s assistant, Jim Roche, letting me know they’ve arrived. At the same time, Jade and I bump into Leia and Rachel. The three girls go off together while I head to the autograph area awaiting the Sven crew.

11:40 am – Leia, Jade, and Rachel visit the STAR WARS area of C2E2. This spot is hosted by the 501 Garrison – a group of STAR WARS costume-makers who help raise money for charity while sharing their fan fervor. It was a family-friendly place with crafts offered for kids, actual Astromech droids moving & whistling about, and free photo opportunities. If you’ve ever wanted to know what it feels like sitting on the Emperor’s throne from Return of the Jedi, look no further! 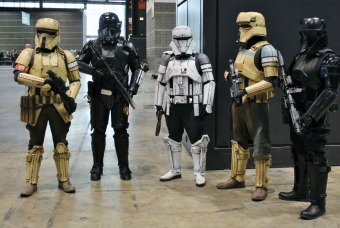 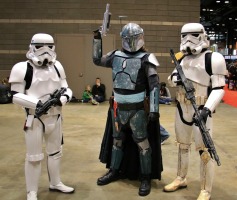 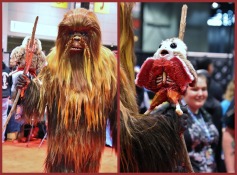 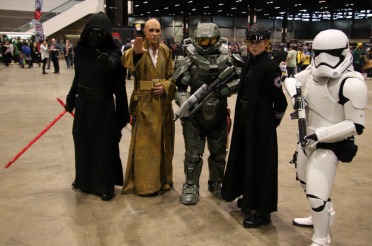 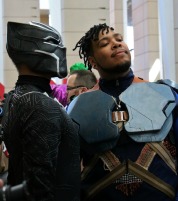 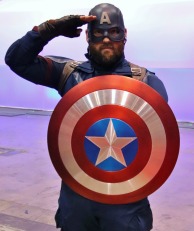 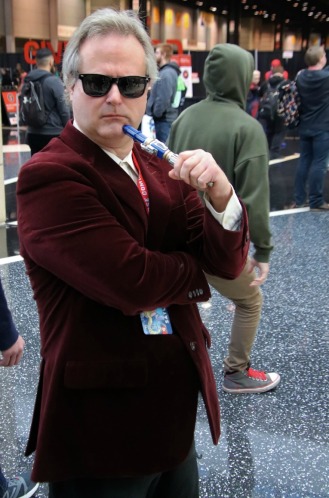 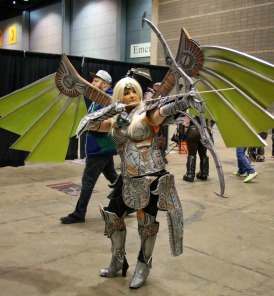 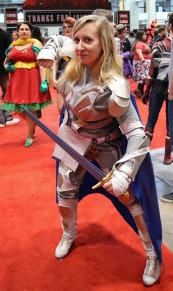 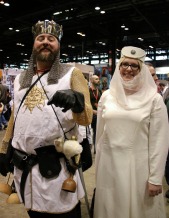 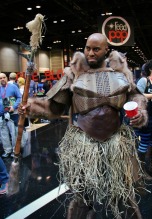 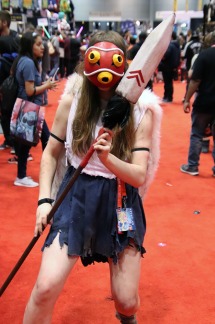 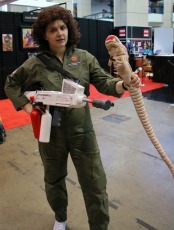 1:30 pm – Girls attend a performance of the Acrobatica Infiniti Circus! This is a first-of-its-kind group of performers who perform their death-defying stunts in cosplay! If you’ve ever fantasized about seeing Spider-Man jump fifteen feet before your eyes or watch Wonder Woman workin’ the pole, then this is your show! 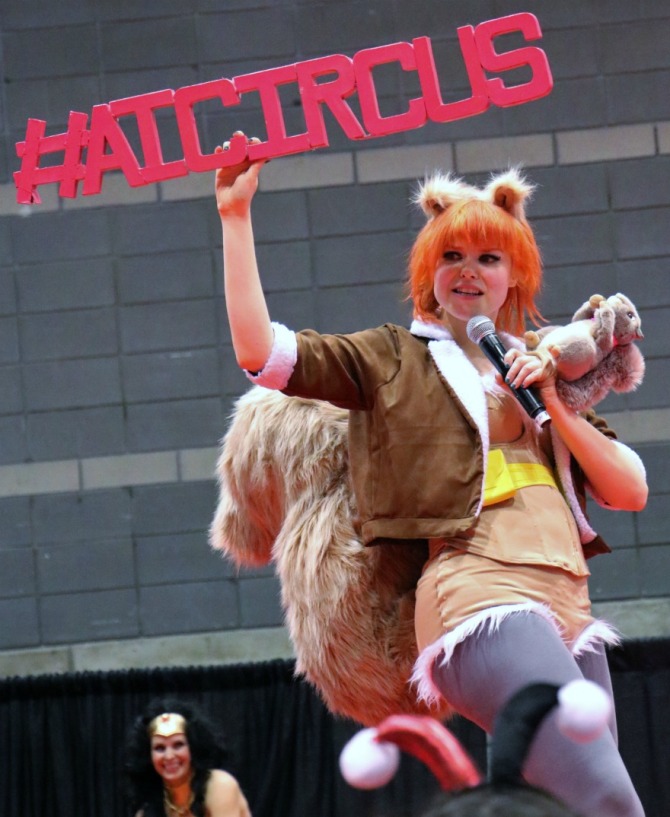 2:20 pm – Later, outside the convention hall, some other cosplayers were putting on shows of their own! 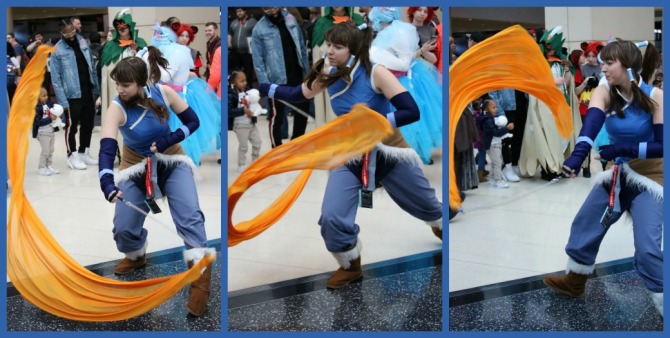 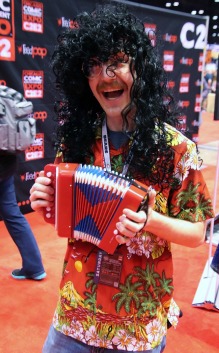 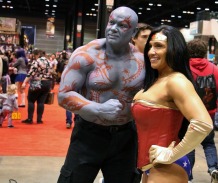 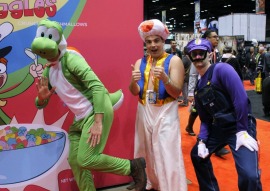 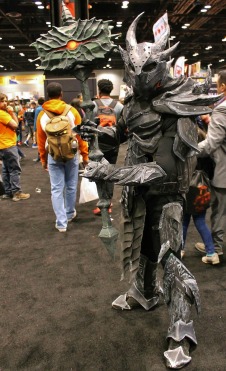 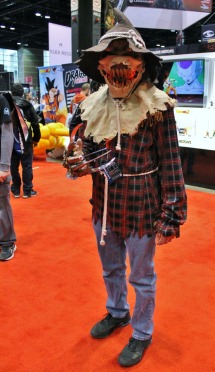 4 pm  – I say “Goodbye” to Svengoolie and check in with the girls. Leia and Rachel are watching a D&D-related show while Jade is upstairs attending R.L. Stine’s Panel. With an hour to spend on my own, I visit Artist Alley.

4:15 pm – Somebody, pinch me! Sitting in a booth with hardly anyone in his line is Comic Book god, Chris Claremont! Claremont performed comic book CPR on the X-Men back in 1975 when he introduced the “new” team which included Nightcrawler, Storm, Wolverine, Thunderbird, and Colossus. His deft writing and strong female characters took a team that was withering on the vine and helped make them the sensation they remain today. Claremont would stay with the book an additional 16 years – the longest run of any X-Men writer. 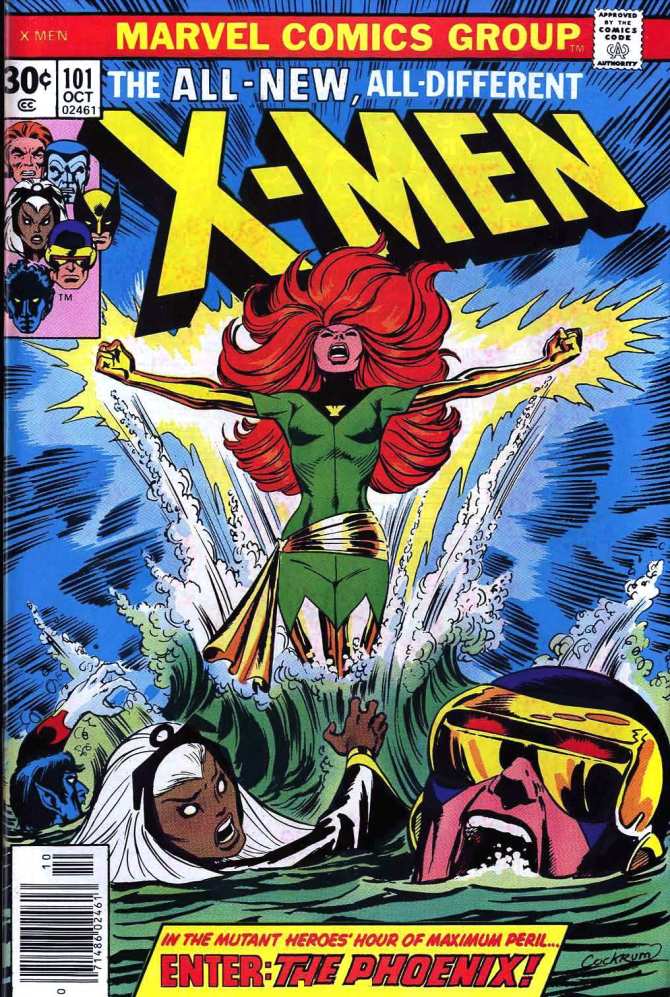 Best of all, he was only charging $5 for an autograph! I end up purchasing a print of the cover of Uncanny X-Men #136 with Dark Phoenix on the cover – my all-time favorite comic book story that I’m pretty certain FOX is going to ruin a second time later this year. Claremont spends a LOT of time with his fans and was enamored by a Captain Britain omnibus (hardcover collections of vintage comics) that the fan in front of me brought him to sign. Claremont slowly looked through the entire book while quizzing the young fan to make sure he’d actually read it. He’d say, “Ah…here’s Betsy (Psylocke) before she ended going West and…” and then he’d stop to allow the kid to finish the sentence.

“…joined the X-Men!” the kid proudly answered correctly. After Claremont finished looking the book over he said, ‘Gee, it sure would have been nice if they’d sent ME a copy of this!” He then looked up at the ceiling and sighed, “Ah…Marvel.”

4:20 pm – Back out roaming the convention hall when I spot another item I had my heart set on – a beautiful print of a flying saucer pulling up an RV. I figure once I get it framed it will be just perfect in my new kitchen! One of its artists (this was a collaboration between two friends) is working the table and sees me admiring it. In addition to the saucer, he’s also got a great print of Vampira and the 2017 Pennywise. 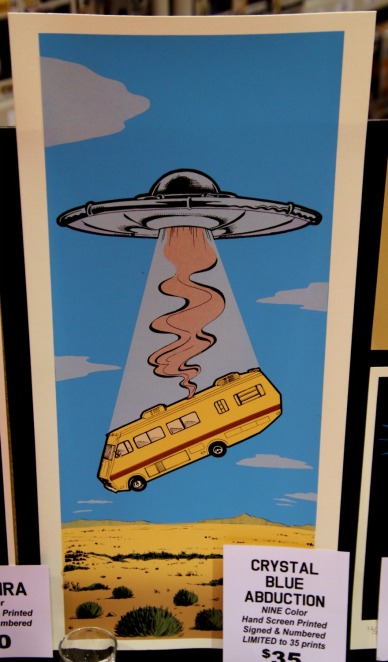 He told me the print was one of 35 and that it debuted at Flashback Weekend a couple years back. Apparently, the first two were sold to celebrity guests, Traci Lords and Hellraiser’s 1st female Cenobite, Grace Kirby. The story goes that Lords was signing in a booth nearby and every time she passed it, she’d point and say, “That one is mine!” Later Kirby came over and said she wanted one, too. Thankfully, the artists (one based in Chicago and another in Colorado) made more than one so both celebs could purchase one. These guys also do a horror podcast with a British pal called “Chewing the Scenery.”

5:15 pm – My legs and feet have had it! I go back to the car alone and wait for the girls.  Two days down and one more to go! And this particular Sunday at C2E2 would be all about Netflix’s Daredevil himself, Charlie Cox!

2 thoughts on “C2E2 Saturday or: How much can I fit in a single Blog?”