The Daves would like to wish our fellow American monster fans a very Happy Thanksgiving while also giving them the bird! No, not just any bird, mind you, but a “battleship” sized fowl from another dimension! I’m referring, of course, to the 1957 quintessential “turkey,” The Giant Claw. This film’s not only achieved cult status for all the wrong reasons but has since gone on to become something of a Thanksgiving movie tradition (for fun people who hate football). In fact, about seven years ago I included it as part of my list of Thanksgiving-related genre films. I remember at the time wondering if I wasn’t reaching a bit by having it on there but those doubts were all erased last July during a “Hollywood Kaiju Strikes Back” panel at G-FEST XXIV. Although the Godzilla Festival revolves around Japanese monsters, Martin Arlt and Archie Waugh gave an entire hour to some of their American contemporaries. This included such atomic menaces as The Deadly Mantis and The Beginning of the End while saving the best of the worst for last. Our moderators introduced the film by informing is it was their Thanksgiving movie tradition. So I not only walked away feeling validated regarding my list, but also with enough tidbits to offer YOU this special Turkey Day blog. And if that isn’t a reason to feel thankful, then we just don’t know what is!

*The lead actress, Mara Corday, was twenty-three years younger than her romantic costar, Jeff Morrow. The following year Corday would go on to become the Playboy Playmate of 1958.

*The film was so cheap that, during the end scene when they’re flying on the mission to kill the monster, they couldn’t afford anymore pilots and the General has to do it! 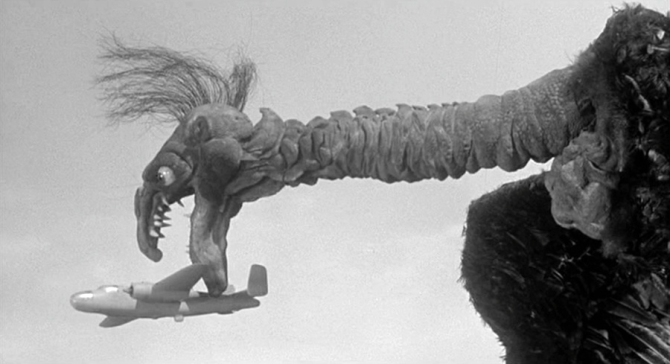 *Director, Fred F. Sears, was known for churning out a lot of films for Columbia, including some decent film noir. Despite the subject matter in The Giant Claw, he wasn’t much fun to be around. Mara Corday described him as “a very nervous man who had no sense of humor and was extremely uptight.” 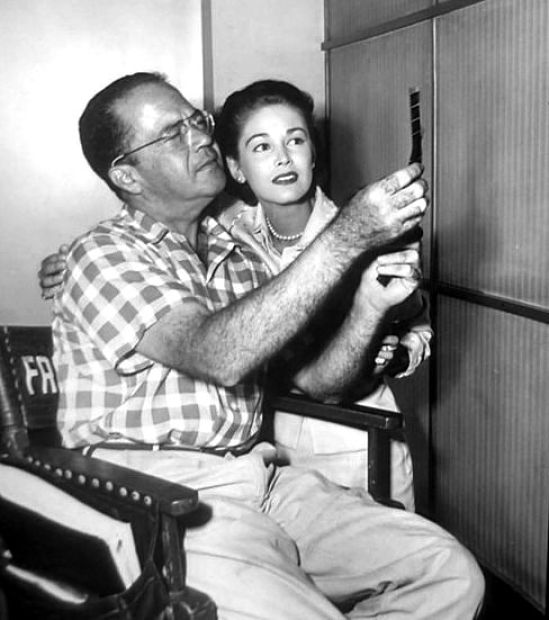 *Mara Corday was best known for her role in Tarantula. She later married actor, Richard Long, and stopped acting until his untimely death. She then returned to work and often with Clint Eastwood whom she was good friends with. At this date, Corday is still alive and has her own fan site.

*The film was offered to Ray Harryhausen who turned it down. Despite the absence of the famed stop-motion artist, stock footage from his Earth vs the Flying Saucers (the previous film Sears Directed) can be seen in The Giant Claw.

*Without Harryhausen, the filmmakers made the fateful decision to hire a company outside of Mexico City. This prompted one of our unpolitically-correct moderators to ponder whether that wasn’t the reason The Giant Claw looks like a “Giant piñata.” In truth, the monster was a marionette.

*Director, Joe Dante, is a fan of the film and says the reason the movie has reached such cult status is that the creature design “is so bad it reduces everything around it to cartoon status.”

*None of the cast and crew saw what the creature looked like during filming. During the premiere the audience broke into laughter every time it showed up. This prompted the embarrassed director to leave the theater early. Sadly this would be Fred Sears last film as he died five months later. 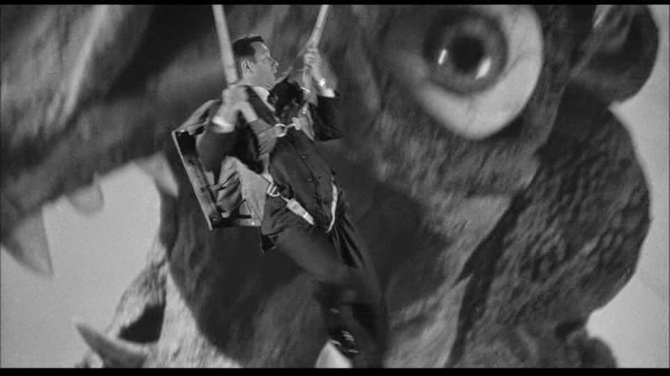 *Just about every discussion revolving around the monster leads to a comparison of it being as “big as a battleship” or describing it as a “flying battleship.” Our moderators suggested you make a drinking game out it but also suggested you have an ambulance on speed dial for your inevitable alcohol poisoning. 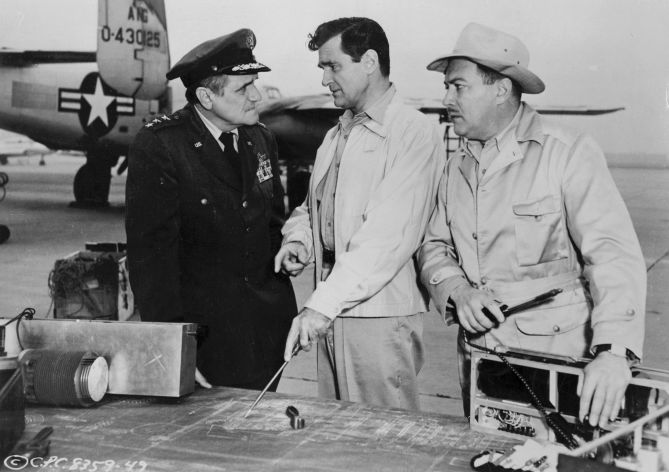 *The film is available free on YouTube (and below) so you’ve got no excuse but to watch it! You’ll be Thankful you did!

Happy Thanksgiving from the Terror Daves!