Quentin Tarantino called it the “perfect giant monster movie,” Tim Burton sites it as one of his all-time favorite films, and Brad Pitt recalled at an Academy Awards Ceremony it being the first movie he ever remembers seeing. Sometimes referred to as TOHO Studio’s “Kane and Abel” story, the beast vs beast opus I’m referring to is none other than War of the Gargantuas or, as it was referred to in its native Japan, Furankenshutain no kaiju: Sanda tai Gaira. If that title conjures up images of a certain classic Universal monster, that’s no accident. This movie began as a direct sequel to TOHO’s Frankenstein Conquers the World before taking on a persona of its own. In July of 2016, exactly fifty years from its release, fans at G-FEST (Godzilla Festival) in Chicago paid homage to this often overlooked giant monster masterpiece and I wanted to share some of those highlights.

*So far as giant monsters go, the Gargantuas were very expressive. This was one big advantage of using rubber-suited monsters over stop-motion. Haruo Nakajima, who played many of TOHO’s famous monsters including Godzilla and Rodan, sites his role as Gaira (the evil, green gargantua) as his favorite due to the flexibility of the costume and that his eyes were visible, allowing him to show expressions.

*As mentioned, this film was a sequel to TOHO’s Frankenstein Conquers the World (1965) but was considered a stand-alone film in The United States. Ironically, it would be released in the US in 1970 alongside Monster Zero which starred Nick Adams, who also played in the first entry. 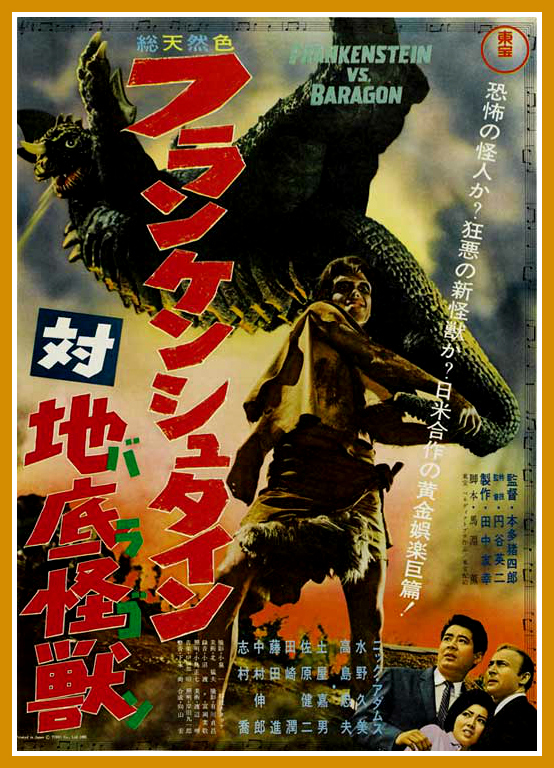 *Originally the monsters were supposed to have tails; a fuzzy one for the gold monster, Sanda, and a scaly, reptilian tail for Gaira.

*Not only did Quentin Tarantino site War of the Gargantuas as one of his all-time favorite monster movies, he instructed Darryl Hannah and Uma Thurman’s stunt doubles to study the film’s fight scenes for their epic battle in KILL BILL Vol. 2.

*Actress Kumi Mizuno (Akemi) was so afraid of heights that she became ill during the scene where she’s hanging from a tree. Despite being filmed just three feet above a mattress, Director Ishiro Honda had to constantly remind her to “look up” to prevent her agoraphobia. Needless to say, her visible “queasiness” in the film was no act.

*During the Process of dubbing the film in English, lead American actor Russ Tamblyn’s audio got lost. It’s been speculated that his rather disinterested performance in the film was a direct result of him having to go back and re’dub all his lines.

*In the film’s original draft, the movie was to end with the volcano not only finishing off Gaira and Sanda, but going on to consume the entire city of Tokyo and eradicating the remaining monster cells.

*Of all TOHO’s giant monster films, War of the Gargantuas is often considered one of its scariest. The scene where the green monster, Gaira, stares up at the man on the boat while under water was pretty chilling.

*Another controversial scene showed Gaira tossing an unfortunate woman into his mouth before devouring her. In the American release, he goes as far as also spit her dress out after he’s finished!

*Despite the monsters apparent demise, there was talk of bringing one or both back for a Godzilla film. Unfortunately this never went farther than the discussion table.

4 thoughts on ““War of the Gargantuas” turns Fifty!”