I left work early last Thursday to attend the Roe Conn Halloween show in Frankfurt, Illinois. For those unaware, Conn is a well known, Chicago-based talk-radio personality who’s hosted national shows for over two decades. Although I’ve been familiar with his voice since back in his “Roe & Gary” days, I saw him for the first time at last year’s Halloween show  which was at the same venue, CD & Me. Of course my attendance was based on the return of their special guest, Svengoolie, whom I hadn’t seen in almost a FULL week since Elgin’s Nightmare on Chicago Street. Talk about a dry spell! If only I could figure out a way to declare all my Sven-chasing gas mileage at tax time.

I almost wasn’t sure I was going to make it at all this year. The tickets are free but you have to register online ahead of time. Last year they sent my confirmation a day or two beforehand but this year…nada. After inquiring I discovered I was on the list but that something happened to their database and it was all messed up. Just as I arrived Roe was telling his listening audience the same thing while assuring them that nobody will be turned away. The Roe Conn show is a four hour program but Svengoolie shows up during the last hour to participate in the “News or Ruse” game (more on that later).

Also like last year’s show, the hosts dressed up for Halloween and (going from the above photo, left to right) Kevin Powell was golfer Arnold Palmer, Anna Davlantes as Melania Trump, Roe Conn was swimmer Ryan Lochte, Violetta Podrumedic a traffic light, and Judy Pielach as “Judge Judy.” They also brought along two technicians; one dressed as a Ninja Turtle and the other as the late rocker, Prince. Whenever Roe posed for pictures, he’d make a point of staying in character by having a dazed look on his face to emulate Lochte’s reputation of not being the brightest of bulbs.

This time around, the show’s musical entertainment were ’60s rockers, The Ides of March, with lead singer Jim Peterik. Even if you aren’t familiar with his name, you definitely know his music. Aside from writing and performing the hit song, “Vehicle,”with this band, he also founded Survivor and co-wrote the 1983 Rocky III anthem, “Eye of the Tiger.” Other hits co-written by Peterik were performed by Cheap Trick, 38 Special, Lynyrd Skynyrd, REO Speedwagon, and Sammy Hagar. It turns out he was born in Berwyn, Illinois and Peterik later admitted that every time he tells people that, they always bring up Svengoolie.

Roe brought on a couple of local guests including the Mayor of Frankfurt before featuring Sidney Friedman, a local “Mentalist.” Friedman is credited for predicating last year’s Oscars with 100% accuracy while also bedazzling the WGN hosts by guessing what numbers they had secretly written or what playing cards they randomly picked from a deck. He’d just been a guest on the TV show Windy City Live after mailing them a letter proclaiming that the Chicago Cubs would lose their first game in the World Series before winning the second…both of which came to pass after the letter reached the station. The audience at CD & Me were all cheering when he further went on to predict that the Cubs would win their next three games before becoming Champions in Chicago this Sunday (yesterday). Since then the Cubs lost two games and the World Series is still going…so much for the Mentalist! 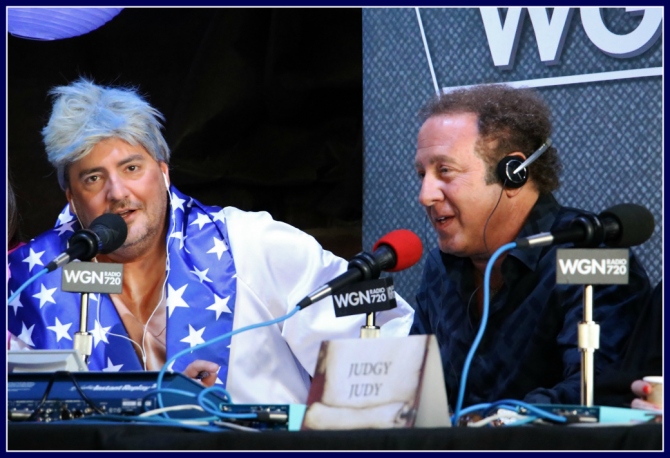 Svengoolie showed up and everyone approached the stage to take pictures of him while the WGN crew wanted selfies. He totally lit up the whole event! 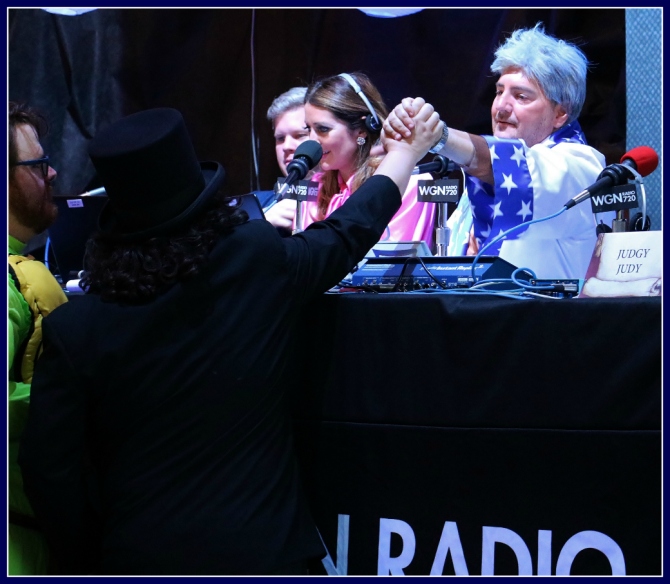 Just like last year, Svengoolie’s role was to oversee a costume contest (winner in the photo above) and participate in a game called “News or Ruse.”  This involved hearing a bizarre headline and having to decide whether it was made up or an actual one. You can watch it in the clips below…

Of course Svengoolie did not come alone and his assistant, Jim Roche, was there too. It was Jim’s birthday but he had little time for celebration while looking out for America’s number one horror host during the home stretch of Halloween. Jim and I talked briefly after the show and I waved goodbye to Svengoolie before zooming out the door. After the show he’d be catching up with the WGN crew and I wanted to get out of the lot before everyone else left.

Svengoolie had a busy weekend ahead but this was the last I’d see him for the 2016 Halloween Season. I had a Masquerade Ball to attend on Friday and a Halloween Party on Saturday.  It was indeed a fun and busy season but I’m looking forward to relaxing.

Now, to figure out what movie to watch…