There are few things we Daves love to see more during our travels than weird roadside attractions…and the goofier the better! For example, during this trip we got to see “The World’s Biggest Pistachio” near Alamogordo which was absolutely worth a pit stop.

A gargantuan nut, however, would pale in comparison to what we’d encounter just a couple of days later during our drive to Tucson. It actually started the night before when we hopped on Interstate 10 towards Deming and saw the first of many big yellow billboards advertising “THE THING?” 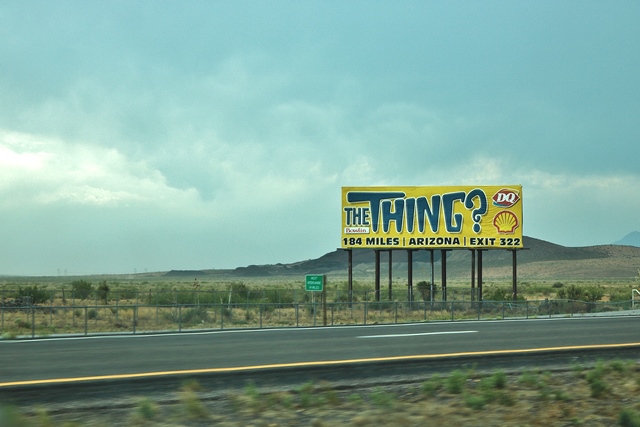 Obviously the minimalistic approach paid off because we were sufficiently hooked. A rest stop that hints at possibly displaying some sort of monster?  They couldn’t have set a better trap for us Terror Daves if they tried! Needless to say we were downright giddy the next morning when we found out we’d be passing the next day on our way  to the Reid Park Zoo! 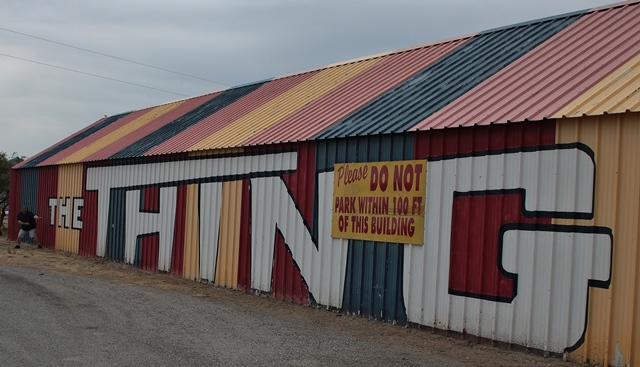 After filling up the gas tank (it’s at a Shell station) we ran inside and discovered that although THE THING was their star attraction, it was actually one of many oddities our $1 entry fee would grant us. Before seeking these strange iniquities, however, we had to peruse their huge gift shop which offered some of the weirdest/coolest items ever seen along with merchandise heralding THE THING! 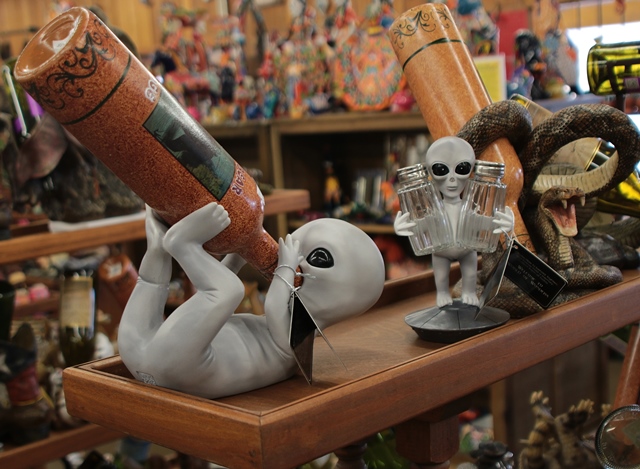 We asked the couple running the register if they minded us taking photographs and they not only granted our request but offered crazy items for us to pose with. Prior to this place, I had no idea just how many uses a dead rattlesnake had. 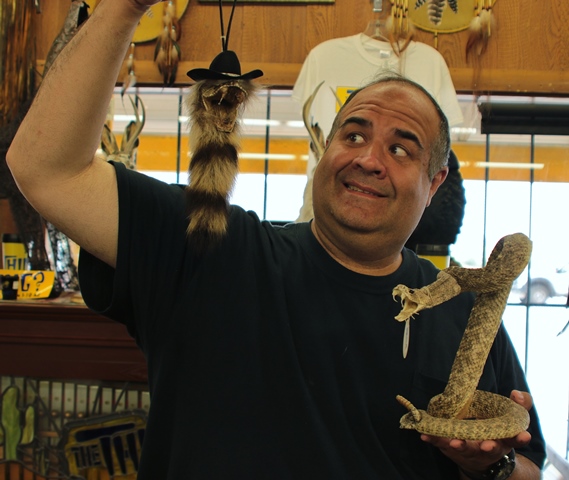 They also had a couple of great Jackalopes for sale that we’d of probably purchased if not for the having to carry them on the plane ride back. I discussed this creature in an older post I’d done on Cryptozoology a couple of years ago but, honestly, you just haven’t lived until you’ve actually held one in your arms!

Once the fun and games ended it was time to get serious and step into the entryway to begin our search for THE THING! By this time the suspense was killing us!

We crossed the threshold and found ourselves in an old stable where the horse pens had been converted into makeshift exhibits. This hodge podge of curiosities included an old covered wagon, wooden statues, and antique cars; one “believed” to have once driven Adolf Hitler. Another section was dedicated to torture devices. 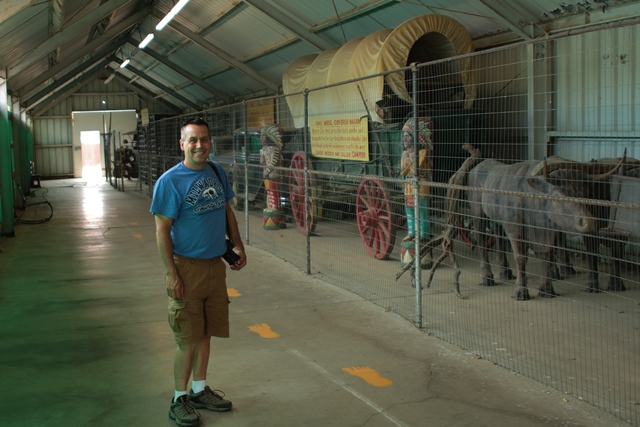 We passed through the stable to an outdoor, adjoining walkway that had yellow, monster-sized footprints guiding us to THE THING.

Before the big moment, however, they’d take us to yet another building full of unusual goods like old weapons, a really bad stuffed tarantula, and driftwood painted to look like animals. At this point the biggest mystery was how this gas station managed to hide so many buildings!

If you say so…

We followed the footprints back outside to the building that, at last, stored THE THING! 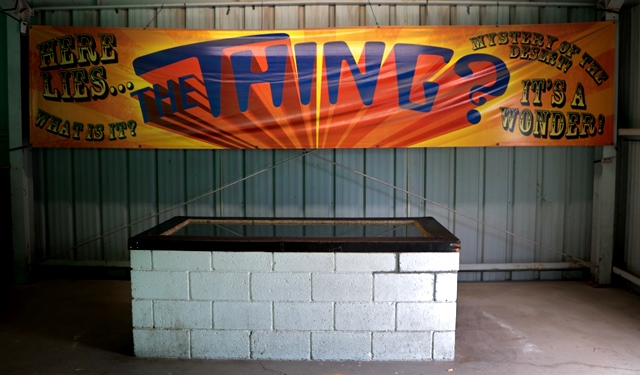 Now, I don’t want to spoil this for anyone who may be planning their own southwest road trip and would like to see THE THING for themselves. Although there are images of it all over the Internet, I personally find that a shame since, for us, 95% of the fun was the anticipation. Anyway, if you want to see THE THING now, you must scroll down the page and follow the yellow footprints yourself. If not, we’ll catch you in our next chapter. 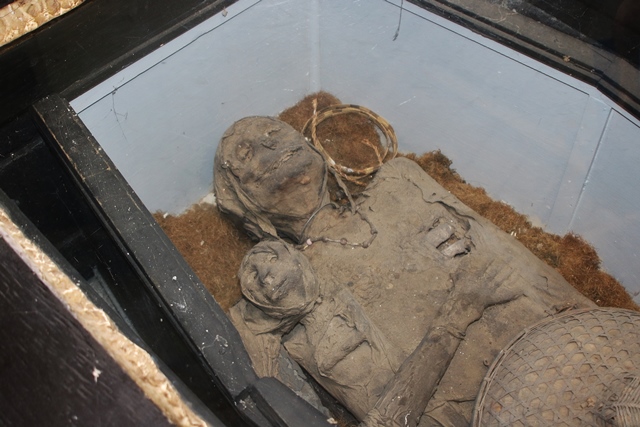 …a mummified mother and child! 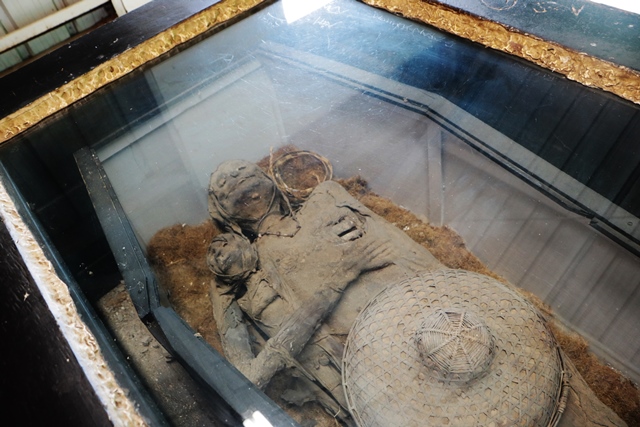 Though probably not real mummies.

In truth, they may have been actually been something even rarer. These “mummies” are believed to have been created by the great Homer Tate a.k.a. “The King of gaffes.” Tate had many occupations in his life but, back in the ’40s & ’50s, was a sideshow exhibitionist who would have made P.T. Barnum proud. His creations(which included feegee mermaids, shrunken heads, and pygmy mummies) made him something of a legend of the Southwest while securing his place as the black sheep of his devout Mormon family.

Homer Tate working on one of his creations

Whatever the true origin of THE THING (or should I say, THINGS?), I can tell you that we weren’t at all disappointed. Gazing into that glass tomb, we knew what we were really looking at was the last remnants of what was once a proud tradition of good old fashioned sideshow “humbug.” To most modern eyes it would seem fake and silly but imagine what a traveler seventy years ago would have thought as they pulled over from a long drive and first gazed at THE THING? In the end it was less about realism than it was about how well the owners could spark their customer’s imagination. And, in that regard, THE THING may very well have been the best dollar we’d ever spent.

Coming Up…Our Tarantula quest comes to end in “The Mystery of Signal Hill!”