After a fun morning in Roswell, New Mexico we were back on the highway heading southwest towards Deming. What’s in Deming you ask? Not a whole lot, but we needed a place to crash before making the trek to Tucson where there’d be plenty. Today’s stretch was about three hours and if there’s one thing we’ve learned from previous road trips, it’s the importance of breaking up long drives with any interesting attractions we can find along the way. Unfortunately, those aren’t easy to come by in this mountainous region which is why we were very happy to discover something just an hour into the drive while also gaining new insights about America’s iconic messenger of forest fire prevention, Smokey Bear. Now for most of my life I’ve always referred to him as Smokey THE Bear but, after being admonished on numerous occasions by our friend April (whose father-in-law used to be the Director of New Hampshire’s Forest and Land), have since learned the error of my ways and no longer use the word “the” as Smokey’s middle name.

Smokey was created in 1944 by the National Park Service as their fictional spokesman for teaching the public about forest fire prevention. The character was influenced by the success of Disney’s Bambi along with the crazy notion that perhaps their previous campaign featuring maniacal World War II villains may not be the best approach. 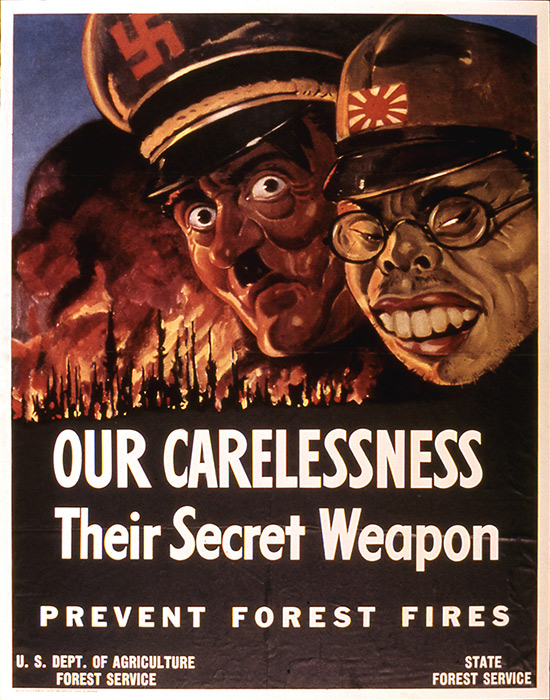 Six years later a young black bear was found charred and orphaned thanks to a completely preventable forest fire that happened in New Mexico’s Capitan Mountains. The bear was rescued and soon became the living embodiment of “Smokey” while spending his remaining years as a celebrity at the National Zoo in Washington DC. After his death in 1976, Smokey’s body was returned to Capitan where he’d be buried at what is now Smokey Bear Historical Park…a small but certainly worth a leg stretch & potty break attraction operated by the New Mexico Forestry Division. 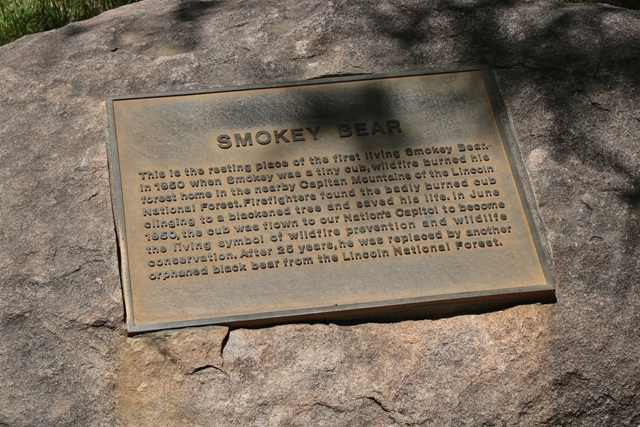 After paying our respects to Smokey, we drove another 80 minutes to White Sands National Monument. I have to say, it was truly breathtaking! It isn’t just the amazing white sand that mesmerizes you but the way it compliments the deep, blue skies and billowy white clouds above. 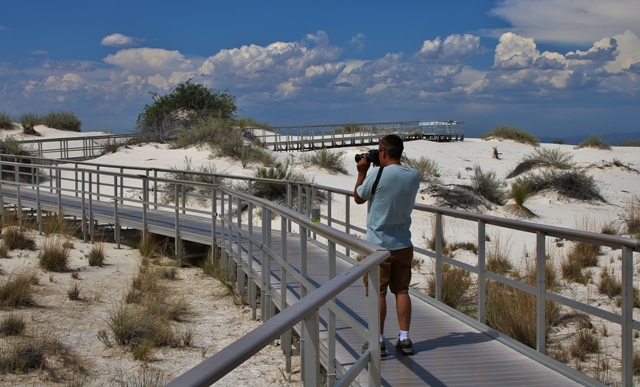 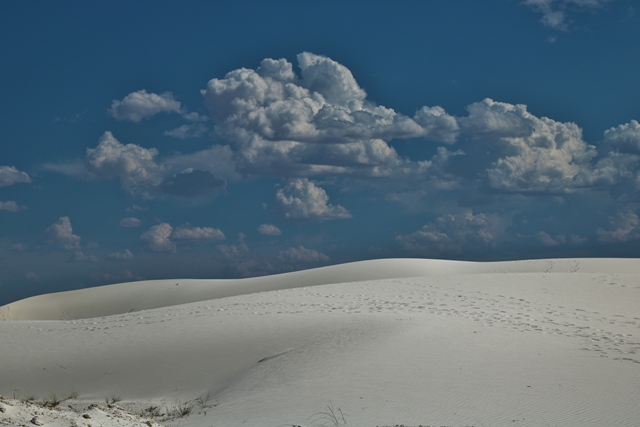 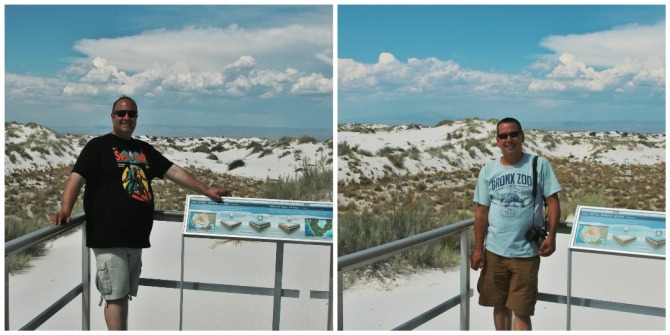 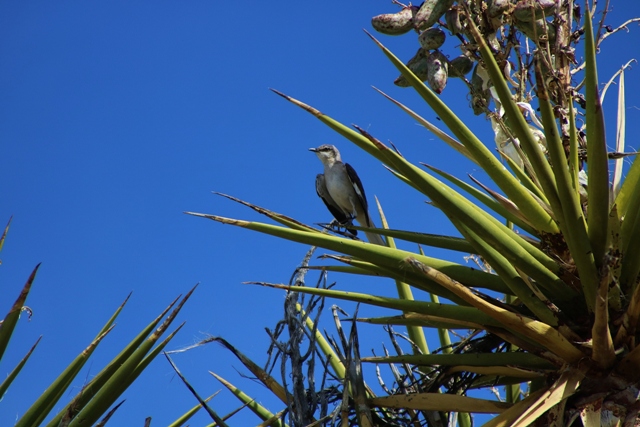 The rest of the drive to Deming was uneventful aside from us having to go through a illegal immigration check point; a not so subtle reminder that we were near the Mexican border.

We arrived in Deming that evening and checked into a retro 70’s looking hotel attached to a restaurant that we made the mistake of eating at. After sitting down we found ourselves trapped in a conversation between the two only other patrons there…who also happened to be sitting at opposite ends of the restaurant from each other. After fifteen minutes of listening to them yell back and forth across the room (while the staff acted like it was totally normal), David looked like he was about to explode while I started having flashbacks of my mother; a woman whose life mission is to make everyone around her as deaf as she is. I’m pretty sure one of those guys was also inebriated, not just because he was slurring his words but by the way he added salt to his Corona. He shook the shaker so hard that the top fell off and half the contents poured in and around the bottle before he casually drank from it. As soon as they left we about cheered until our food arrived. I assumed being this close to Mexico that their enchiladas would be amazing but got “based on a true story” Mexican cuisine instead. I’m fairly confident that whatever it was they served, it started its journey to my plate as a frozen TV dinner. At this point you’re probably asking yourself what this rant has to do with anything or why I’m even delving into it. It’s because I still get mad just thinking about it!

Anyway…we decided to channel our frustration by taking a desert hike and searching, yet again, for wild tarantulas. We headed out to the nearby Florida mountains which a friend of David’s said was a good place to find them. On our way there we passed a few ranches while dodging their open range cattle. 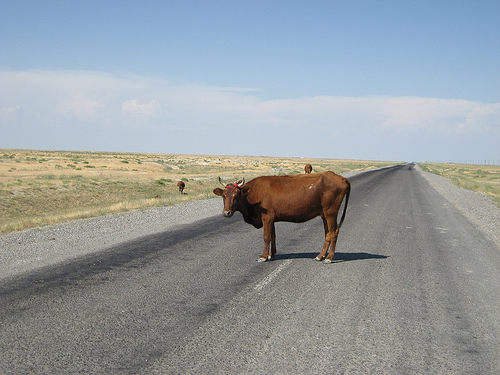 We found a place to park near the mountains and quickly got to work investigating possible tarantula dens. Even though many spots seemed promising, they’d all end up entrances to yet another giant ant colony. I told David our Kingdom of the Spiders dreams were being killed by the Empire of the Ants. Of course there were also a fair share of big desert beetles, too. 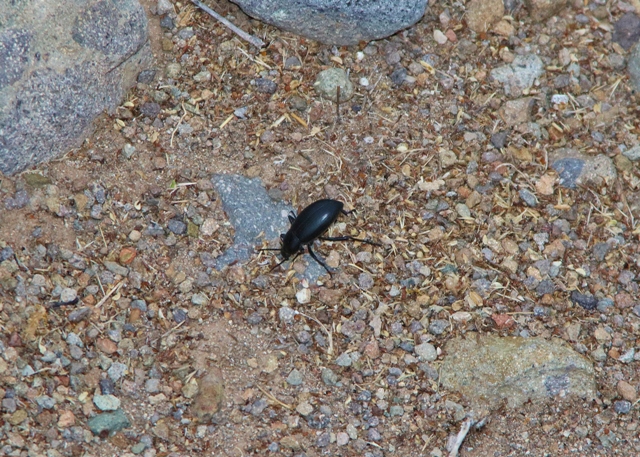 One welcome difference between this hike and our previous ones was the cooler, evening weather conditions which were downright heavenly with a slight breeze and clear, desert skies.

What I didn’t realize at the time was that instead of searching for tarantulas we should have kept our eyes out for wild Persian Ibex. Apparently New Mexico’s Florida Mountains have the only wild, purebred population of this Iranian mountain goat which we used to have a species of at Brookfield Zoo.

We decided to separate in the hopes of covering more ground. David found a horned lizard while I spotted wild quail which was pretty cool. Then we both came across the half-eaten body of a gray fox and decided to hike together again. There were also a whole bunch of cow pies courtesy of our bovine friends who’d obviously grazed over every inch of this mountainside! 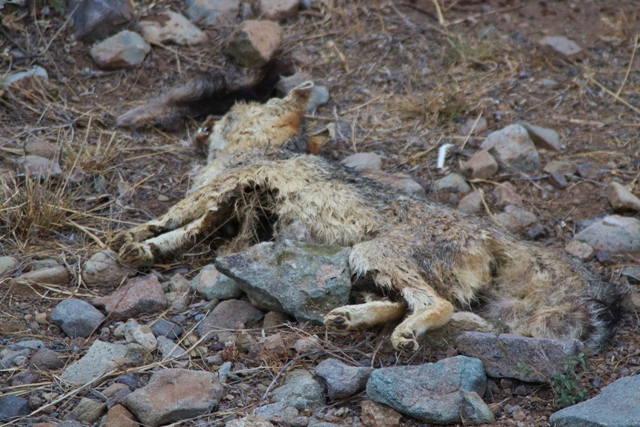 We stopped our hike just as the sun began to set. David drove back slowly down the dirt road leading away from the mountain while I stuck my head out the window looking for any possible spiders that could be heading towards the roadway. David said the cooler temps might motivate the cold-blooded arachnids to seek the warm concrete that retains its heat longer than sand & soil. Once we hit the main highway, however, we had no choice but to admit defeat. At least we’d shaken off some of our frustration and, honestly, there was no way you could feel anything but peaceful staring at that gorgeous New Mexico landscape and its stunning pink sky. 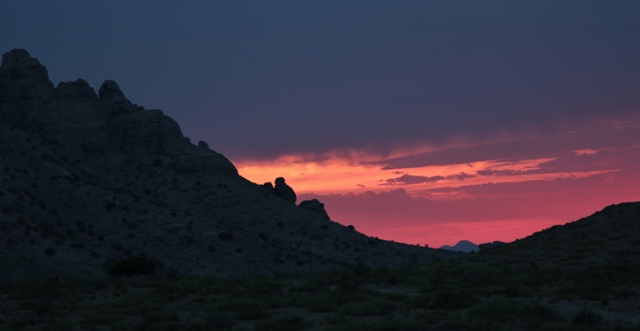 Early the next morning we’d be heading into Arizona where we’d get ready to start the second week of our epic road trip. Despite consistently coming up empty with the spiders, we remained hopeful that “The Grand Canyon State” would change our luck. But, even if it didn’t, Arizona would still offer us Terror Daves something that none of the other states could.

Coming up….What is THE THING?