The Daves are pleased to welcome back our very first guest writer, Jamie Lee Cortese!

Horror comedy is a very interesting and diverse genre.  “Horror comedy” sounds like an oxymoron, but horror and comedy go together so well, and there are so many ways to approach this fun genre.

On one end of the spectrum, you have films like Killer Klowns from Outer Space, which lean much more towards comedy (unless you have coulrophobia).  On the other end, you have films like Scream, in which the danger comes across as very real, but there’s a lot of dark comedy throughout.  Somewhere between those two extremes are films like Abbott and Costello Meet Frankenstein, which has much more light-hearted comedy that mainly comes from characters’ reactions to serious danger.

Horror comedy is a great genre for horror fans, who have seen so many tropes repeated to varying effect in horror movies that it’s great to actually laugh with a movie.  It’s also great for people who are new to horror, because it can ease them into the genre. 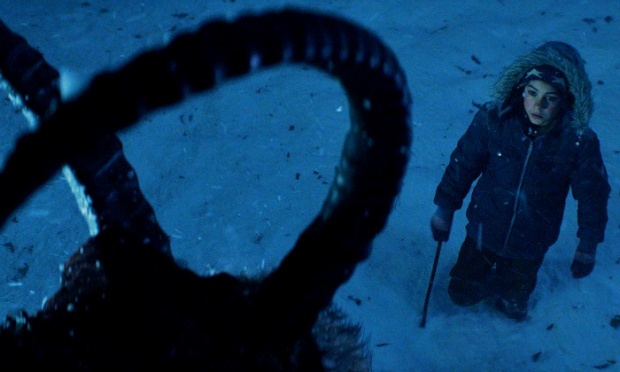 This snow was yellow when I got here, I swear.

If you’re going to read reviews before seeing Krampus, please keep in mind that some reviewers unfortunately miss that it’s supposed to be a horror comedy, which might affect their rating.

I have a special place in my horror-loving heart for horror comedy, and another one for monster movies, so I walked into Krampus expecting to have a fun time.  In other words, I’m definitely biased.

Never bring a stick to a Krampus fight.

For those of you unfamiliar with the Krampus legend, here’s the gist: Krampus is St. Nicholas’ assistant.  St. Nicholas brings presents to the nice children.  Krampus punishes the naughty children.  And I don’t mean the “go sit in the corner” type of punishment.

Take a look at the trailer, which shows both the comedy and horror in Krampus:

As a gift to you “nice” readers, this review is spoiler-free! 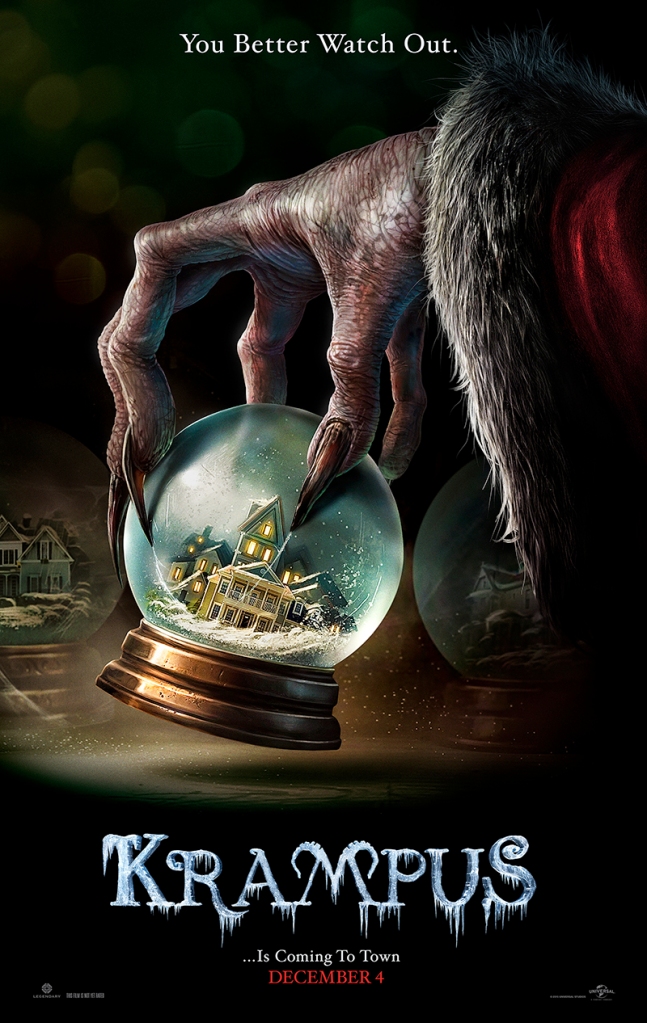 “You better watch out”… or he’ll make you cry…

The trailer tells you the basic plot, so let’s get right down to business.

Since Krampus is a horror comedy, I’m sure you have two important questions…

Goodness, yes!  Since Krampus centers around a family, the comedy is surprisingly varied.  The older, troubled Aunt Dorothy is going to make different comments than the middle-aged, gun-toting Howard.  The comedy becomes more scattered as the film progresses, which helps highlight the increasing desperation of the targeted family, but it’s never completely lost.  Yes, comedy is subjective, but the sheer variety really does promise something for everyone.

We spend a lot of time getting to know the family and their relationships before the horror sets in, so if you’re seeing the movie specifically to see Krampus, be aware that you’re in for a wait.  I enjoyed seeing everyone under “normal” (for Christmas) circumstances before their world was turned upside-down.

Which brings me to your next question…

You bet!  The scares are also varied, ranging from hilarious, to creepy, to thrilling, to, yes, very scary: sometimes alternating between them.  The horror gradually becomes more intense and consistent as the film progresses, which feels like a very natural growth.  The comedy helps lighten the mood between (and sometimes during) the horror, which really keeps you engaged.

Of course, horror is also subjective: if you prefer horror movies that are closer to something that could happen in real life, then you may not find Krampus scary at all.  But that’s another great thing about horror comedies: if you don’t find them scary, you can still find them funny and enjoy them anyway.

Krampus is rated PG-13, so it’s not a gore fest, but you may want to be careful about bringing very young children.  There are a lot of jump scares and some of Krampus’ “helpers” are creepy in ways that adults and teenagers will easily brush off, but may disturb younger kids.  But, on the other hand, some kids will be able to handle it with no problems.  Just make sure you know what your kids can take.  You may want to discuss the film’s themes afterwards with them.  Also, there’s a fair amount of swearing.

Now, the bonus round…

Here’s a question: when was the last time you saw a horror movie that had heart?  And I don’t mean someone getting his or hers ripped out.  Krampus has a lasting effect because the title character doesn’t just randomly wreak mayhem: he goes to specific households for a very specific reason.

Krampus has a lot of characters, but pretty much everyone really gets a sequence in the spotlight.  Every adult character has at least one moment to shine in the family’s fight for survival.  The actors do a great job of playing both the comedy and the horror.  The script gives them fun sequences of bickering and snark that will remind everyone of your relationship with those particular relatives that you only see on holidays.  But an even stronger reminder is that underneath that “I’m only tolerating you because it’s Christmas” attitude, they really do love and care for each other, and definitely don’t want to see each other succumb to the evil of Krampus.  Because you get to know the family before the horror really gets rolling, you’re genuinely rooting for them, too. 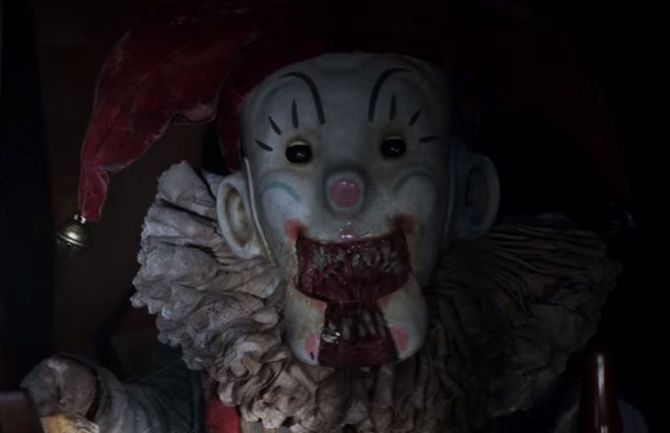 I don’t see what coulrophobes are worried about, it’s just a jester… OH MY GOD!

Let’s be honest: most of us know when a movie’s using CGI.  Even if it’s incredibly realistic-looking, there are certain things we know have to be CGI, for one reason or another.  I’m not against CGI at all: when used well, it’s wonderful.  But, I also love practical effects.  Many of the effects in Krampus don’t use CGI, which is great to see in a modern horror movie.

Will you like Krampus?  It all depends on how you like your horror comedies.  If you’re a fan of horror, holiday films, or both, I say you won’t regret giving Krampus a chance.

Krampus is a fun, thrilling ride, and, believe it or not, a great way to get into the spirit of the holiday season.  I definitely recommend it, and will be seeing it again.  Stick around during the credits for a new, haunting holiday song.

Scary, funny, and a little something extra to take with you this holiday season?  What more could you ask for in a holiday horror comedy?

Happy Holidays, and please, be good… for goodness’ sake!