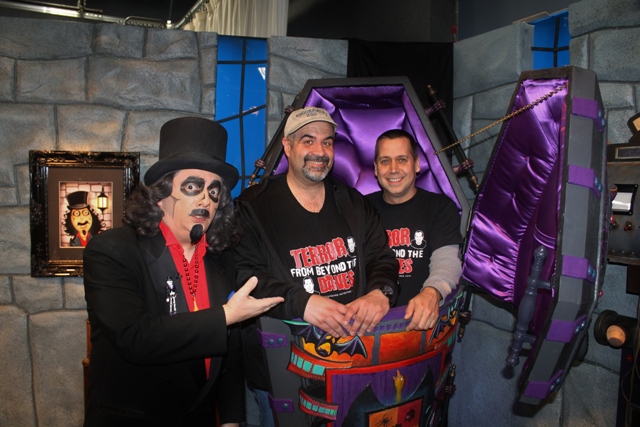 On Friday March 27th, we headed out to Chicago to do something we’d dreamt of doing since first becoming Terror Daves five years ago; being present for a Svengoolie taping at the studio! I’d been there before back in 2013 and had the honor of throwing chickens at him during the beginning & end sequences of The Leech Woman and Dracula along with getting to see some of my favorite props such as Tombstone, Durwood, & Kerwyn. At the time, the studio rules were pretty strict and I wasn’t allowed to share that experience on social media nor on this site which was pretty painful since I was so excited about it that wanted to shout it from the roof tops. Happily, I’ve now been given permission to do so as well as share our experiences during this visit (provided we waited until those shows aired and didn’t give anything away in terms of content). Here are some shots from my first visit in 2013… 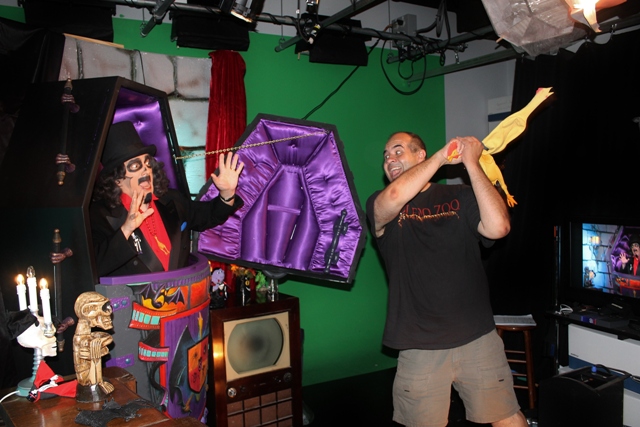 At that time the station was being renovated and filming took place in a small room that had to serve as Sven’s set in the interim. Since then he would have a all new set to compliment the new coffin – also created by Acme Design!

I remember the day after that visit David sending me an email asking how it felt having “lived the Svengoolie dream?” The answer, of course, was that it felt fantastic though I certainly wished he could have been there too and was delighted when Sven invited us both out the day after his latest zoo appearance. This would be especially cool since I’d get to see him perform in his new set which I hadn’t seen since it was in development over at Acme Design in November (story HERE).

Having a Geekgasm while given the opportunity to help paint Sven’s new set!

Even more exciting to me was getting to finally meet Doug Scharf (a.k.a. Doug Graves) Sven’s keyboardist. The parody songs had always been my favorite facet of the Son of Svengoolie and Svengoolie shows so not only meeting him but getting to see a live performance was almost too good to be true.

David: It is amazing to me, after all these years of being a Svengoolie fan that I actually get to see him and hang out with him each year when I visit Chicago. My first intro to Svengoolie was during his Son of Svengoolie days back in the early 80’s. Here in Rhode Island we had the Creature Double Feature, a Saturday afternoon showing of the best of the best in monster movies on WLVI Channel 56 out of Boston. At a time when this Saturday staple seemed to run its course, the station started syndicating the Son of Svengoolie, which was actually my first exposure to a horror host. I thought his sketches were brilliant and that his segments breathed new life into my favorite movies. Unfortunately, it didn’t last long and the Creature Double Feature was quickly replaced by Kung Fu Theatre, soon to be replaced by infomercials. Sven also was the one that introduced me to the horror magazine, FANGORIA, with issue 25 that featured an article on him! I never forgot the Son of Svengoolie and upon learning that he was still broadcasting, I immediately sought out copies of his show, which led to the meeting of the Daves and the rest is history.

Dave: We arrived a little earlier than expected and decided to have lunch across the street from the TV station at a Whole Foods store (which Sven and his producer/assistant Jim Roche refer to as “Whole Paycheck” due to their hefty prices). After getting a text from Jim stating they were ready for us, we walked across the street and waited in the station lobby until he brought us up to the studio.

David: Our experience started in the control room which was very cool to see. I never realized that the sound bites were added live, thinking that they were added later. To listen to everyone and how they worked together was fascinating and the banter between everyone was priceless. Most of the sketches were done in just one or two takes, showing the professionalism of everyone involved. To see the making of the show from this angle was interesting but nothing beats being on the actual set where the magic is created. The most difficult part is not laughing out loud and ruining a shot!

Dave: After a while we were invited back downstairs and into the main studio. Before taping began we walked around and checked out all the great embellishments on the set’s shelves. I noticed a “Sven car” that our friend, Jamie Lee Cortese, had made for him a couple of years ago and other great items sent in by fans. I also asked Sven if I could pretend to do the “man at the door” skit with him as it has always been a dream of mine to do. We did a bit based on an old joke I’d gotten from some corny book years ago and it was fun; though not something that was taped for the show. 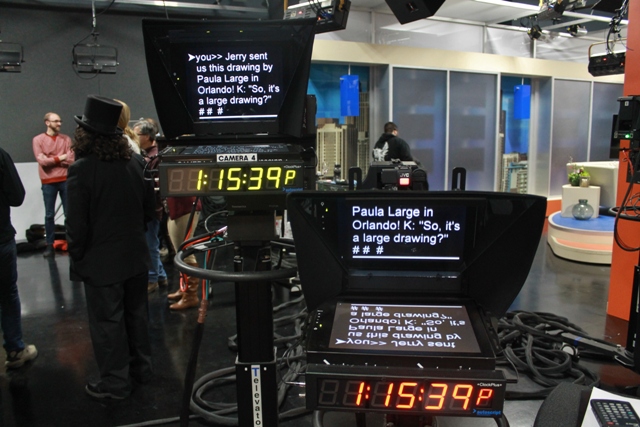 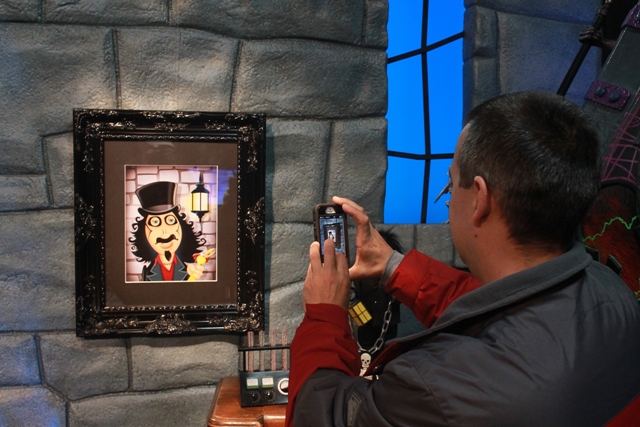 David: The night before, at the Brookfield AAZK Vital Grounds spaghetti dinner fundraiser, Rich and Jim came up with an idea to utilize me in the show. Rich said that since I only make it out to Chicago once a year he wanted to help make the experience a memorable one. I had no idea what they had in mind but I was certainly game, and very excited to be a part of the show. When we arrived and it came time to do my part, they explained that a fan had sent them a chicken hat and that they wanted me to model it while they explained what it was during the mail segment. The shot was set up and filmed quite quickly and was a lot of fun to do. I cannot thank Rich and Jim enough for including me in this! To not only be invited to the filming of his show and to see the amazing set in person but to be asked to make a cameo is an honor that I will never forget and one that I will always cherish and appreciate! 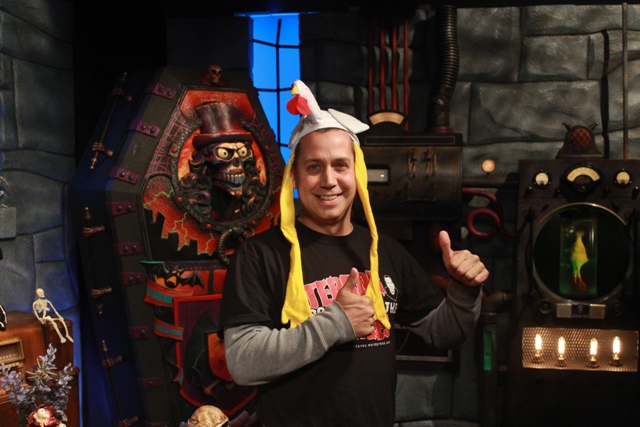 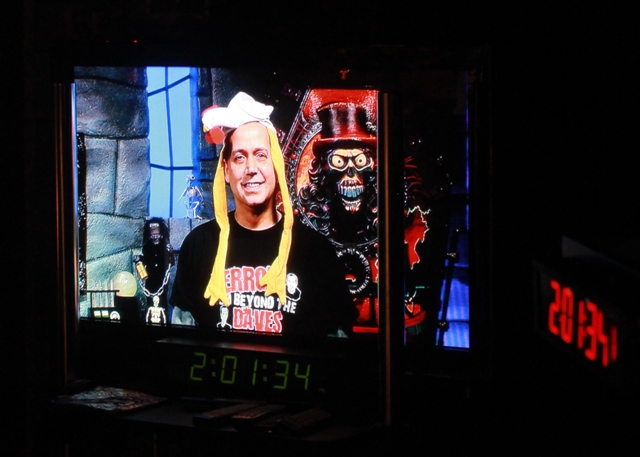 The show would air on Saturday April 18th and was the ultimate experience for David who not only got to finally go to the studio but see him outside of Brookfield Zoo!

We then took a couple of chairs off to the side to see the next Svengoolie segments being taped. These would be musical numbers so we were excited when we heard Jim say to Sven, “Doug is here!”

One thought on “The Terror Daves visit Svengoolie at the Studio Part 1!”