Let me first get this out of the way: this movie kicks SERIOUS ASS. I can’t recommend it highly enough, so there are no excuses for not seeing this movie right now!

OK, now that I’ve gotten that out of my system, time to get down to reviewing this movie. Unlike the two TerrorDaves, I am not a serious and lifelong fan of Godzilla. I remember watching the old movies on Saturday afternoon TV. My siblings and I watched TV shows after school like “Ultraman” (that dude’s energy crystal would give out after like 1 minute of fighting…he needed a serious hardware upgrade!) Even then the special effects were laughable and it was easy to see that the monsters were just guys in rubber suits. Despite that, they were always great fun to watch. 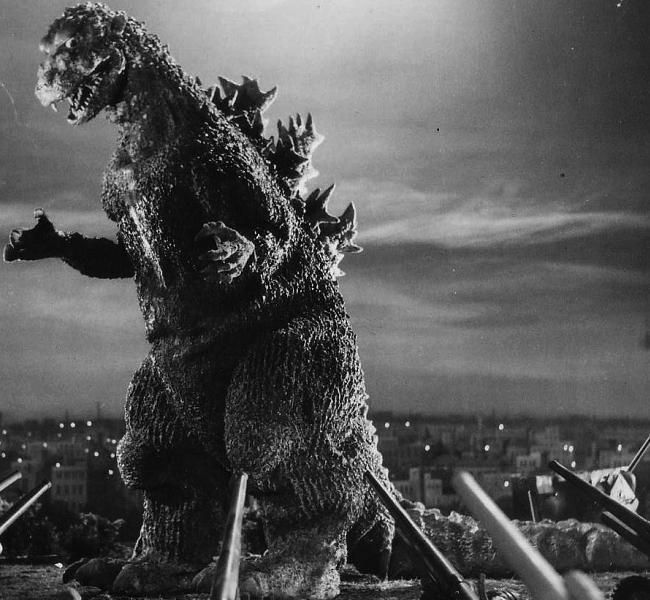 Fast forward to 1998. After the revolutionary CGI effects of Jurassic Park and the explosion in special effects technology, it seemed a great idea to capitalize on many people’s fondness and nostalgia for Godzilla. This was when children’s TV shows, books, and comics were starting to get “reboots” and “reimaginings”…why not the most famous monster of all? Godzilla had evolved from the prototypical “shot across the bow” warning a world about the dangers of nuclear weapons into the lovable anti-hero beating up other guys in rubber suits. Godzilla, directed by Roland Emmerich, opened in May, 1998.

I did see the movie, and thought it was OK. It was basically Godzilla as a T. rex destroying New York City. I do know that serious Godzilla fans revile that movie, and I understand why. It took everything specific and meaningful about Godzilla and chucked it out the window to make your basic “monster destroys Manhattan” boilerplate story. It was not helped by casting Matthew Broderick as the hero. 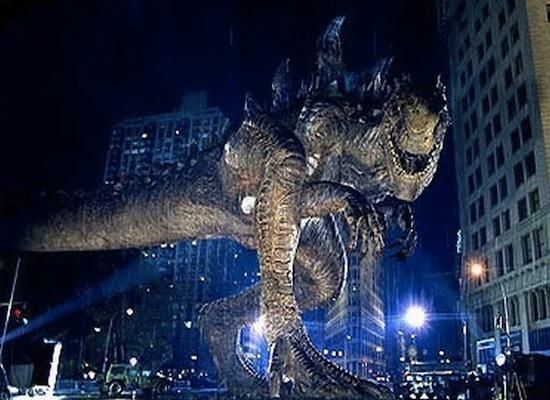 16 years later, could director Gareth Edwards and writers Max Borenstein and David Callaham do any better? Why, yes they can!

The movie opens with its credit sequence running over a montage of scenes of nuclear tests in the 1940s and 50s. I believe they are all real film clips of mushroom clouds, people putting on sunglasses to watch said mushroom clouds, shock waves rolling across deserts. It  starts including scenes of the U.S. military fighting a monster. You can only see a back full of spikey plates along the ocean’s surface.

The next setup happens when the story moves forward in time an unspecified number of years. Two people (who we later find out work for a corporation called Monarch) are flown into a mining complex in the Philippines that experienced a major collapse. One of the two is Dr. Ishiro Serizawa (Ken Watanabe), who becomes important later in the story. Deep in the bowels of the mine they find a huge skeleton and a strange pod that is lit from within. There is another pod nearby that appears to be empty. Many significant looks are given but we cut away before any discussion occurs.

Dr. Ishiro Serizawa (Ken Watanabe)…This is the Least Sad He Looks in the Entire Movie

We finally meet the protagonists of the story, Joe Brody (Bryan Cranston) and his wife Sandra (Juliet Binoche). They live in Janjira, Japan with their son Ford.  Both Joe and Sandra work at the local nuclear power plant – he is some kind of manager / supervisor and she is some kind of engineer / scientist who works with the equipment. The plant has been logging escalating tremors after the “earthquake” in the Philippines. After Joe sends Sandra down to inspect the plant, another major quake occurs. The plant experiences a major breech. Panic ensues amongst the plant workers and they all rush out of the plant. I don’t think I’m spoiling much to say that Sandra is trapped in the plant and Joe has to watch her die behind the blast doors. The situation escalates as the whole town starts to panic when they hear the plant’s warning klaxons sounding. Young Ford, who is about 12 years old, runs out of his school staring at the plant as the towers collapse.

The film now moves forward 15 years. Ford Brody (Aaron Taylor-Johnson) is now a Navy Lieutenant in bomb disposal coming home to San Francisco after 14 months of overseas deployment. He is married to Elle (Elizabeth Olsen) and has a son, Sam (Carson Bolde) who is about 6 -8. He’s not even home one night before he gets a call from the US Consulate in Japan about his father trespassing in restricted territory and getting arrested. He flies to Japan to get his dad. It turns out Joe has been making it his personal mission to find out the truth about what really happened in Janjira. He has the usual “Wall of Weird” in his tiny apartment typical of all truth-seekers in movies – his walls covered in news clippings, scientific reports, and the like. He convinces Ford to join him in going back to their home in Janjira to retrieve some old disks that have data that proves the seismic happenings today are the same that happened 15 years ago.

They make it into Janjira, and after consulting a Geiger counter Joe realizes there is no radiation, so something is definitely strange! As can be expected they get caught and brought to the site of the old power plant.

There Ain’t No Stinkin’ Radiation…What Gives?

Lo and behold, the strange pod that we saw in the opening sequence is here and hooked up to the plant itself. Dr. Serizawa is in charge of this unknown project. He watches Joe’s interrogation and realizes that he is onto something; however, before he can intervene in any way something goes terribly wrong. The same vibrations that showed up 15 years ago reappear and the whole plant shakes. They try to destroy the pod, but it gives off an EMP pulse that destroys all the electronic equipment. It breaks free of the wires holding it down and a giant creature hatches! The hatchling starts raining down destruction on the plant and kills a bunch of people. It ends up flying away to points unknown.  The US government steps in the next day and all hell breaks loose as the Massive Unidentified Terrestrial Organism (MUTO) wreaks havoc across the Pacific. Admiral William Stenz (David Strathairn) leads the military offensive against the MUTO.

I’m Sure Those Wires Will Hold, It’s Not Like There’s a Giant Monster Gestating In There!

That’s a lot of setup for a story and not one mention of Godzilla! In direct opposition to last year’s Pacific Rim, this movie is very judicious in showing the monsters. You see enough of them to get you excited, but not so much you get bored and start wondering how much time they spent in CGI development.

This movie has been retrofitted into 3D; I saw it in 2D, and I see no point in wasting any extra money going to see it in 3D. There is just too much of the movie that is not giant monsters fighting. Much of it is showing humans talking about what’s happening, the aftermath of a MUTO attack, that sort of thing.

Oops, You Just Missed The MUTO

Dang It, Missed It Again

The humans are the weakest link in the movie. Aaron Taylor-Johnson is our young hero who helps bring down the bad monsters, but the faceless MUTO shows more expression then he does. I haven’t seen anything else he’s done, but in this movie he is absolutely wooden. Elizabeth Olsen as his wife is equally flat and expressionless most of the time.  I never really got invested in them nor did I care if they survived or not.

Luckily Bryan Cranston kicks the movie off with a great start. The moment he closes the blast door knowing he is condemning his wife to death is heartbreaking. When the now-adult Ford goes to Japan and helps his dad, Cranston acts head and shoulders above Taylor-Johnson. He is riding high after all the critical acclaim he’s received for “Breaking Bad”, so he adds some necessary gravitas and energy to the setup portion of the movie.

She Was Only in the Movie for Five Minutes, But She Made an Impact

Ken Watanabe has the unenviable position of exposition guy trying to educate the American military about “Gojira”. He maintains one expression on his face the whole time, a kind of moist, close-to-tears droopiness. Frankly the movie could be a love story between Dr. Serizawa and Godzilla the way he talks about the creature. Actually, that might be an interesting twist!

Gojira, I Love You! Please Don’t Leave Me!

One thing that was refreshing was that there were no evil corporations trying to exploit the MUTO, Godzilla, or the situation, and the military was neither bumbling fools (most of the time, anyway) nor “damn the death count let’s keep bombing stuff”. Those are both such overused, tiresome clichés I didn’t even realize they hadn’t occurred until near the end of the movie!

Don’t get me wrong, they do make some questionable decisions. It’s established in the scene where the MUTO hatches that it can emit EMP pulses that disrupt all electronic equipment. So what do they do again and again? Fly fancy, expensive fighter jets all up in the MUTO’s business! There is also an extended sequence where they are transporting some nuclear bombs via train to the coast and of course everything goes wrong. They end up flying the bombs via helicopter. Hello, why didn’t you do that in the first place?

OK, Who Approved this Plan?

The other friend who went to see the movie with TerrorDave Fuentes and I pointed out a few things that more seasoned Godzilla fans would see right away. There is the obligatory saving of a young boy in a ball cap when the MUTO hits the Hawaiian Islands, and he saw a reference to Mothra when Joe and Ford return to their old home in Janjira. I’m sure there are tons of little easter eggs like that for a true fan to suss out. I picked up on the ball cap kid myself, but missed the Mothra reference.

I did laugh at the scientific explanations they used through the movie. I think they could have just said “magic” or, like in Pacific Rim, say the MUTO and Godzilla came from another dimension or something. I snarked a bit about it during the movie, but in the end it didn’t matter. Despite the less-than-exciting  human stories, this was a very fun movie. In one of the battle scenes near the end, a man in the audience spontaneously yelled, “Godzilla! Yeah! Godzilla!” It was hilarious and very apropos. You just can’t help rooting for him.  His design is awesome and he has a wonderful expression on his face. 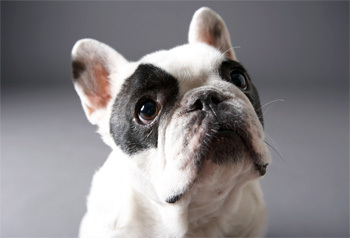 “Woof, Why Thank You My Dear!”

“Growl, Why Thank You My Dear!”

It’s been a long time since I’ve been in a theater where anyone applauded, but three different times Godzilla received a round of applause from the audience. I’m sure there were plenty of hardcore Godzilla fans in the audience, but you didn’t need to be to enjoy this movie. 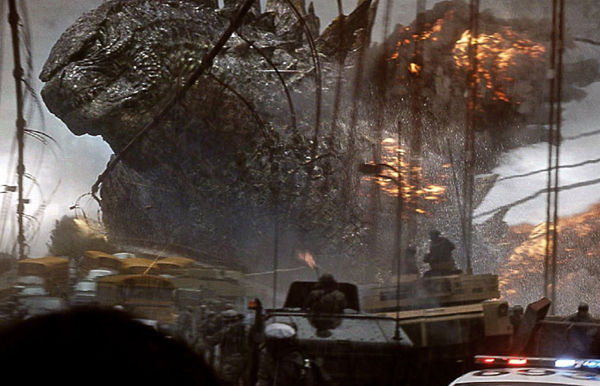