It was Wednesday April 9th, the final day of our momentous two week vacation/road trip with my plane slated to leave for Chicago that evening. Originally we were planning on getting a tour of The Stone Zoo in Massachusetts (courtesy of a zookeeper friend of mine) but after hearing that it would involve dealing with some rough Boston traffic, decided it was best to play it safe and stay close to Providence. We watched “Marvel’s Agents of S.H.I.E.L.D” (which tied into the Captain America: Winter Soldier film we’d just seen the Friday before) before heading out to Rhode Island’s capital city. We only had one thing on the agenda before whiling away our final hours…visiting the grave of the legendary horror and science fiction writer, H.P. Lovecraft.

It was just the week before that we’d stood at the grave site of Edgar Allen Poe during a stop in Baltimore and the two New England born writers had much in common. Aside from neither finding much in the way of happiness nor success during their troubled lives, creatively one can draw parallels as well. As Robert Bloch had written in his essay “Poe and Lovecraft, “Poe and Lovecraft deliberately chose to turn their backs on contemporary styles and subject-matter and created their own individual worlds of fantasy. In this above all else they were similar. And in this, above all else, we readers of Poe and Lovecraft are fortunate indeed (full essay can be seen HERE).

Howard Phillips Lovecraft was born in Providence, Rhode Island in 1890 but you can hardly tread anywhere in the horror realm these days without encountering his influences. Just recently Chicago based theater troop, Wildclaw Theatre, performed a stage version of Lovecraft’s “The Shadow over Innsmouth” and images of his most famous creation, Cthulu (creature pictured at the top of this post), could be seen peppered throughout Victor Baritou’s “Ghoolie Manor” which my fellow Dave discussed in his last entry.

We arrived at The Swan Point Cemetery which was both spacious and beautiful…much more pleasant than the site of Poe’s. Our primary concern was how we were going to find the location of the grave once inside, until David’s GPS suddenly sprung to life. I’d mentioned before that prior to this trip he’d set it to alert us of any interesting attractions. While it hadn’t been particularly useful the previous two weeks, it sure made up for it at very the last minute. Not only did it notify us of the cemetery but provided step-by-step instructions on how to find H. P. Lovecraft’s grave once we were inside. This would prove invaluable as it was somewhat concealed by a larger headstone…his true resting spot. Let me explain… 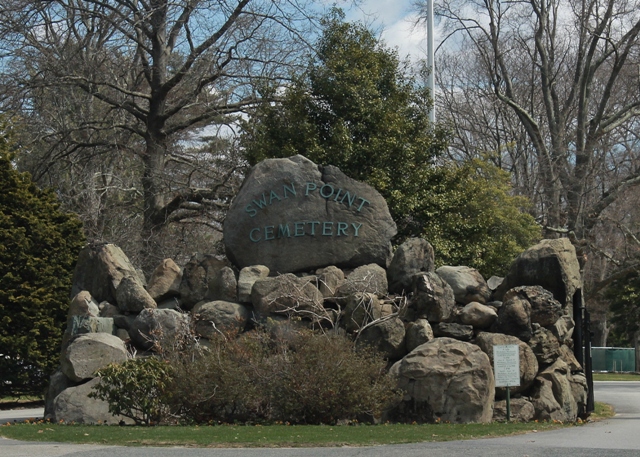 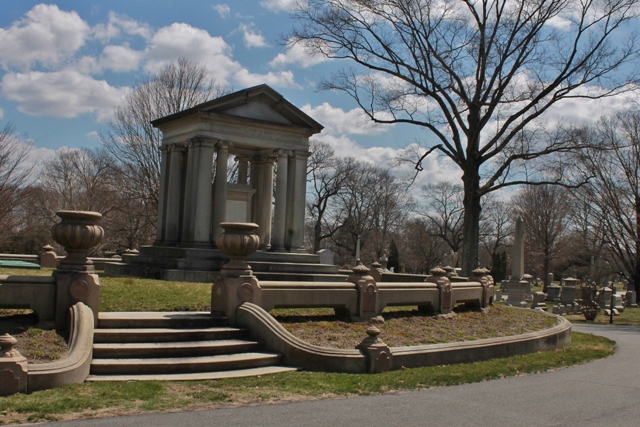 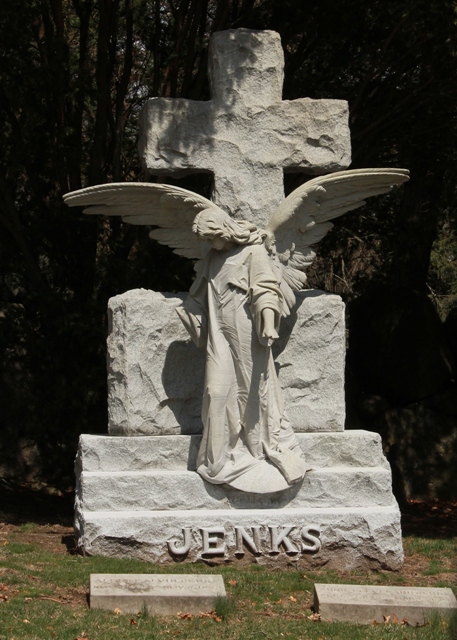 Like Edgar Allen’s Poe, Lovecraft’s final resting place has a bit of a story. For one thing, he’s actually buried under his family’s tombstone which lists his name along with his wife and son. For a group of his devout followers (who see him as every bit the deity as Dagon himself) this just wouldn’t do.

Behind that immense marker is a smaller stone with just his name on it. This was put up in 1977 courtesy of some fans who felt the iconic writer deserved his own. I’m guessing there aren’t too many deceased celebrities who have their names listed on two headstones (both next to each other) but such is the case for Lovecraft. 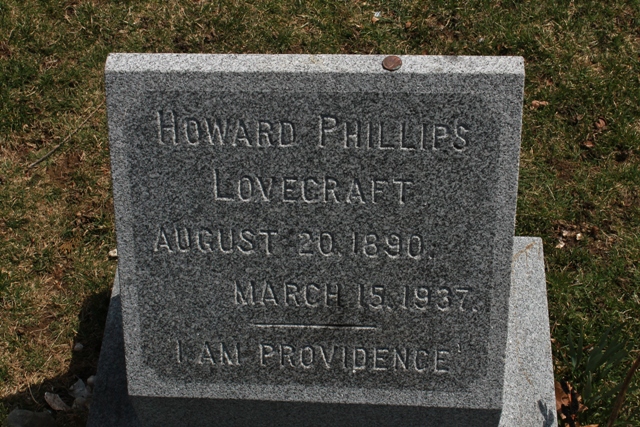 Interestingly, twenty years later someone (apparently unaware of this fact) tried to dig him up. The next day a groundsman found a three foot hole at the spot complete with a single footprint. It’s doubtful any robber(s) would have had any success even if they had gotten the right spot, lest they quietly brought along their own crane.

H. P. Lovecraft rests beneath a concrete lid that is said to weigh at least two tons.

Each year the site attracts a gathering of fans and it’s been said that during this event something supernatural always happens – usually in the form of an abrupt weather change. Regardless of the validity of those claims, one thing is certain; just like Poe, Lovecraft could never have imagined the immortality he would ultimately achieve.

Though the supernatural would not be seen on this day, the beliefs of his followers absolutely were. Scattered around the stone were interesting items such as a Grim Reaper figure, some loose change (a practice believed to assist the dead in paying the ferryman’s toll for reaching the after life via The River Styx), and a clam shells(?). I’m not sure what the significance of those were, unless it was a nod to the watery fantasy realm Lovecraft was so famous for creating.

The weather was sunny (no abrupt weather changes today) and we’d spend the rest of the afternoon killing time by taking a stroll around Roger Williams Park and enjoying some amazing nachos at a local Irish pub. All good things must come to an end and this vacation was to be no exception. It had been a full two weeks chock full of activities and, though we were drained by its end, were certainly fortunate to have had it.

For me it was time to go back to my Sweet Home Chicago and return to the Good (my kids whom I missed terribly), the Bad (work) and the downright Ugly (my dilapidated van). Aside from that, I was excited to resume my coverage of Svengoolie appearances. I didn’t know it at the time, but I was just days away from one of his most memorable events to date.