Going on vacation is fun but, when you’re spending it with someone of “like mind” it’s even better. The Last time we Terror Daves communed was in the fall of 2012 and, in lieu of that lapse, we decided to get together for a two week spring vacation. Two weeks in close proximity to anyone can go one of either two ways…you bond or you get ready to kill each other (for the record, we ended up doing a little of BOTH)!

Fortunately we have a lot in common and I took great care these past 6 months plotting a road trip packed with activities tailor made for our interests. So, in other words, even if we did start getting on each other’s nerves, there’d be plenty of distractions!

Today we visited the Pittsburgh Zoo and then headed to Kecksburg, Pennsylvania. UFO buffs will instantly recognize this as the locale of an alleged crash site; one often referred to as “Pennsylvania’s Roswell.”  For David and I, it was more than a mere pit stop.

So far as extraterrestrial life is concerned, we Daves are both believers. The idea that we’re alone in the Universe is not only arrogant it’s downright ridiculous. There’s also been strong evidence that we’ve been visited and the fact that we were both kids during the Watergate era is likely why we both have a healthy distrust of the government (sort of ironic since my father once held a high position in the FBI and is currently a talking head on CNN).

I’ve never had a substantive UFO sighting though Terror Dave Albaugh did. “There was this one instance that really took the cake,” said David. “I was driving home and there were multiple lights in the night sky doing loop de loop circles. People actually pulled over on the side of the road watching and there was no way they were planes.”

Consequently, he spent a lot time reading up on UFO’s and I’ve been begging him to write a review of the best books on the subject (admittedly more for my interest than you readers) but it hasn’t happened yet. Needless to say, when I mentioned Kecksburg was on our vacation “to do” list he about performed his own “loop de loops.”

The incident happened years before we were born on the night of December 9th, 1965. Eyewitness reports from several states reported seeing a “fireball” streaking across the sky (reportedly causing sonic booms) and eventually crashing into the Kecksburg woods. Residents who were able to get to the site before the authorities did state that they saw a relatively small object (about the size of a car) that resembled an acorn. They also report that the object had strange hieroglyphic-like symbols around it.

Replica of the ship created for “Unsolved Mysteries”

It wasn’t long before the military showed up and did exactly what we post baby-boomers have come to expect…threaten the locals to secrecy, refute it was anything out of the ordinary, and come up with a ridiculous explanation.

The leading authority on the subject is Stan Gordon who has appeared on numerous documentaries and UFO related TV series including Unsolved Mysteries and the UFO Files.  Once we decided to pay Kecksburg a visit, I thought I’d press my luck and see if he could be reached. I figured at the very least, he could suggest a nice place for us to have dinner near by. We were both surprised and delighted when he offered to meet with us!

We’d spent the day at the Pittsburgh Zoo and the weather had gone from chilly to the low ’70s. It was bright and sunny when we arrived in Kecksburg, a rural hamlet found off the beaten path. We pulled up and saw the Unsolved Mysteries replica in the distance. 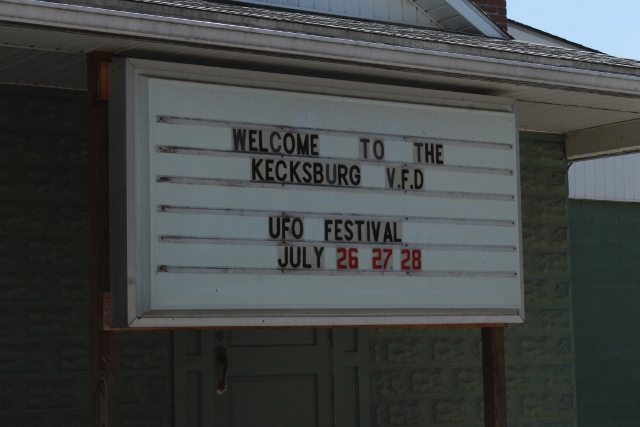 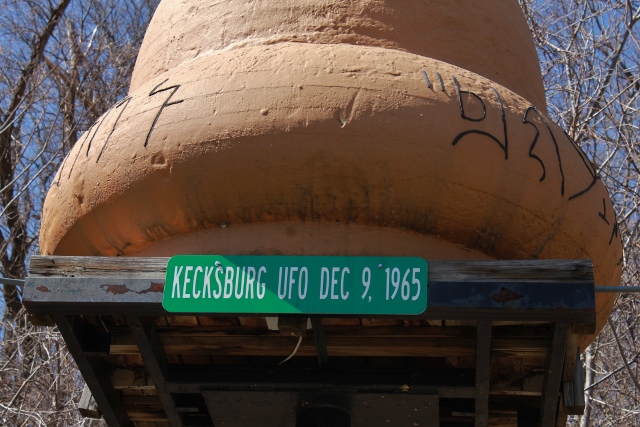 It wasn’t long after we’d arrived when Stan pulled up. He was very friendly and took us into a VFW Hall and past a bar. Although it was about 3pm, the bar was half full and many ran up to meet Mr. Gordon – no doubt indicative of him being a local legend.

The gift shop was a small room in which one of the bartenders needed to open for us. We stepped inside and saw all kinds of great stuff from shirts, replicas of the UFO, as well as books written by Gordon on UFO’s as well as Bigfoot.

There was also a ledger showing all the other people who’ve stopped by, one family (as noted by the bartender) arrived all dressed as aliens! 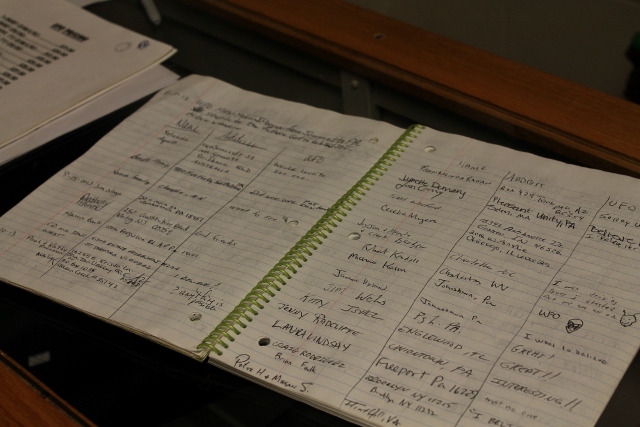 The wall also had a cork-board loaded with newspaper clippings as well as well as photos from past UFO Festivals. 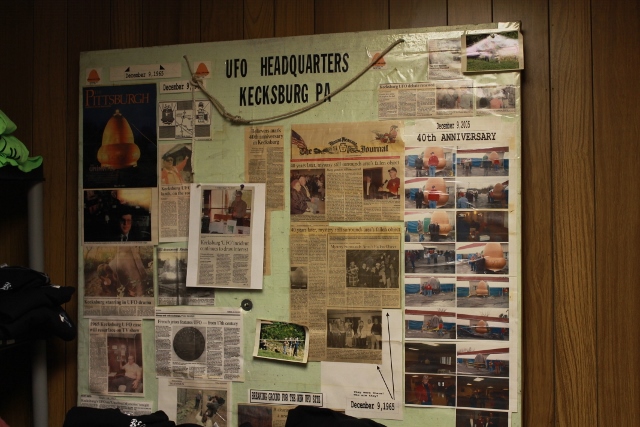 After David and I dropped over a $100 in the shop, we went outside and posed with Stan and the replica UFO.

We thanked Stan for his time and then he said, “Do you have a few moments? I can show you about where the crash took place.” We all hopped into David’s Jeep and were directed to an overlook. “Right out there beyond those trees,” said Stan. “This is the spot where everyone came out and saw the blue lights.” 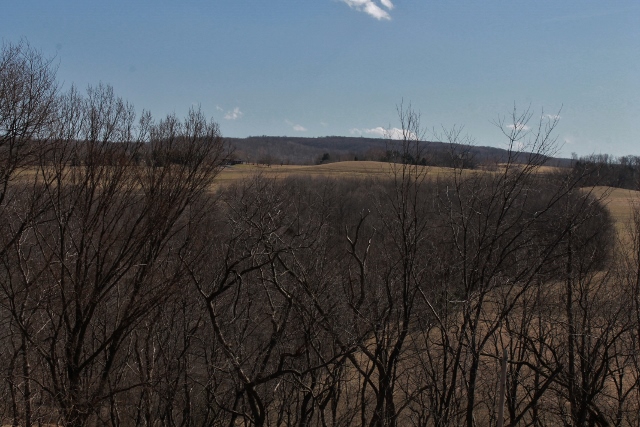 There are lots of theories surrounding the Kecksburg UFO. In 2005, Kecksburg’s 40th anniversary, NASA admitted that they had found debris at the site and that is was officially fragments from a Russian satellite (Cosmos 96 Venus Probe). This contradicted what a NASA chief had stated two years prior about how the orbital path of Cosmos made that an impossibility.

Other theories suggest it was meteor or even a Nazi Bell (supposed time machine created by the Nazis and later given to the United States and, yes, I’m being serious). Stan didn’t seem too impressed with that theory though admitted anything is possible.

After David and I left we were quiet for an hour or so while enjoying the scenery. David suddenly perked up when a truck carrying a covered object passed us by. “Well there goes the UFO,” he said (a reference to some locals who state they witnessed the military carrying out a covered object in the late hours after the alleged crash). 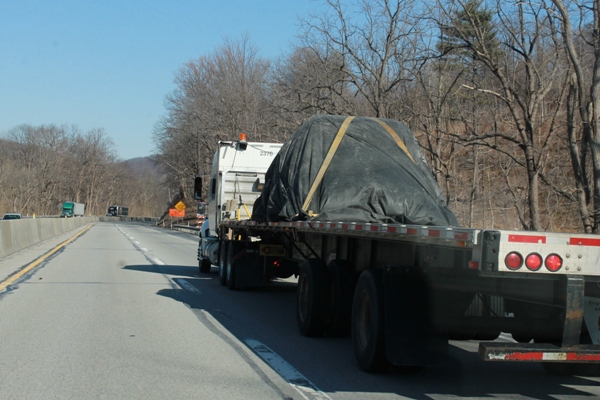 I laughed. “Yeah, but now that you mention it, just what the hell IS under that tarp anyway?

You can visit Stan’s site for more great information on the incident in Kecksburg, Bigfoot sightings, and much more by visiting his official site HERE!