The 50’s saw such a variety of great science fiction films and the creation of so many memorable monsters. My favorite of all of them are the aliens from the 1957 film INVASION OF THE SAUCER-MEN, created by none other than low-budget special effects genius Paul Blaisdell. The fact that this is a low-budget film doesn’t affect the final product in any way and though it comes off as cheesy at times, this will always remain a classic.

Teen lovers Johnny Carter (Steven Terrell) and Joan Haydon (Gloria Castillo), making plans to elope, find themselves in a precarious situation; they must save the earth from the invasion of little green men who land their spaceship in the local woods near Lover’s Point, a favorite make-out place for the local teens. When the young couple leaves the Point, driving without headlights so as not to bother old man Larkin, who owns the property, they accidentally hit and kill one of the saucer-men. In a pretty gory scene for the time, the dead alien’s hand detaches itself from the body of the alien and pops the car’s tire using hypodermic-like needles that come out of the fingertips.

Since they now have a flat tire, Johnny and Joan must go to Larkin’s farmhouse to call the police. While they are doing this, Joe Gruen (Frank Gorshin), who came to town that day with his drifter friend Artie Burns (Lyn Osborn), who saw the saucer-men’s spaceship land, finds the dead alien body under the car and immediately realizes that if he were to put this body on display, he and Artie could make a lot of money. While trying to figure out how to get the body back to the boarding house where he is staying at, he is attacked by more saucer-men who saw their companion get killed. Using their needle fingers, they inject Joe with alcohol, which when mixed with the alcohol he had already been drinking, kills him. The smart aliens then replace the alien’s body with Joe’s, making it look like Johnny and Joan hit him with their car instead.

When the police arrive, Johnny and Joan are brought to the station under the suspicion of drinking and driving, since the air is full of the smell of alcohol thanks to the aliens. At the station, Johnny and Joan find out that Joe had a roommate, Artie. Since the police will not believe their story of little green men they feel that reaching out to Artie is their only chance. They escape the police station and meet with Artie, who agrees to go with them out to Johnny’s car so that they can prove their innocence.

When they arrive at Johnny’s car Artie gets the proof he needs by seeing the disembodied alien hand that is now trapped in the car. When he tries to take a picture of it, the light of the flash causes the hand to disappear in a puff of smoke. The secret to defeat the aliens is now apparent: light kills them! Johnny rounds up all of his friends at Lover’s Point and they lure the aliens there. When they are in position everyone turns on their car headlights, shining them at the aliens, killing them instantly. The invasion is thwarted, through no help of anyone in authority. 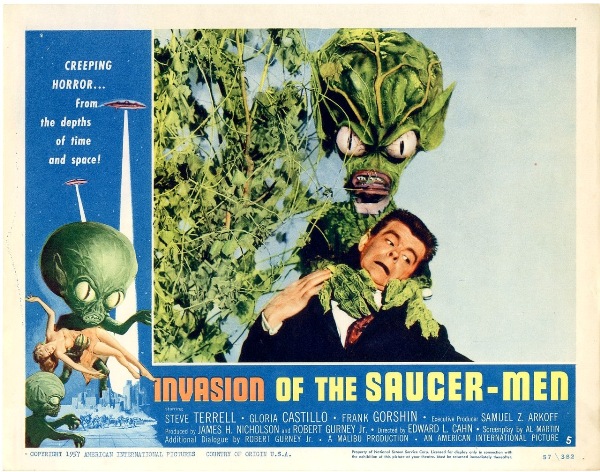 The idea of teenagers saving the day is nothing new in these movies, especially since teenagers were the target audience when this film came out on a double bill with I WAS A TEENAGE WEREWOLF. The police are shown as incompetent as not only do Johnny and Joan easily escape the police station, but they do so in the police chief’s car. Even the military is shown as being inept. In their attempt to get inside the alien space ship, they end up blowing it up. Of course their next stage of action is a complete cover-up, saying that a jet had crashed to local authorities.

This movie works as both a great science fiction film and a comedy. Though the saucer-men may seem comical in appearance, there really is something terrifying about their design. Paul Blaisdell, who created the saucer-men, also created some of the most iconic monsters from the 1950’s. His work can be seen in such films as IT CONQUERED THE WORLD!, IT! THE TERROR FROM BEYOND SPACE and THE SHE-CREATURE. His designs were always imaginative and you have to be impressed with what he created on such limited budgets.

Though they are called little green men in the film, and all color posters and lobby cards feature the saucer-men colorized green, the actual color of masks were brown, which in my opinion, make them look even more evil. For 1957, this film featured two scenes of gore that you normally wouldn’t see. When the disembodied hand is moving around, there are strands of tendon and exposed bone clearly shown. During one scene where a saucer-man attacks Larkin’s bull, its eye is gouged out by the bull’s horn, in oozing detail. This particular scene was actually cut from many television prints of this film.

The only time this film has been officially released on home video was in the 90’s on a nice VHS copy. As of this writing there has been no official DVD or Blu-ray release with none in the works. The reason for this is that Susan Hart, ex-wife of the late James Nicholson, who owns the rights to this and many other AIP classic films, refuses the let them see the light of day. Not that I condone this but there are bootleg DVDs available, using the VHS release as the source. This film is such a cult classic that you would think that Hart would realize what a potential goldmine she has, should these films get official releases! Things started to look hopeful when Lionsgate started releasing a series of double feature DVDs under the “Samuel Z. Arkoff Collection: Cult Classics” moniker. These discs featured some great releases in a fun format. Alas, only four sets came out with no plans of more in the future.

In 1965, director Larry Buchanan remade INVASION OF THE SAUCER-MEN with THE EYE CREATURES. This is an almost scene-by-scene remake, only this time in color and with aliens, that do not even come close to Blaisdell’s saucer-men design. Everything about this movie falls flat, from the acting to the special effects. It is worth seeing just once though; to see how bad remakes can be (Buchanan also remade IT CONQUERED THE WORLD with ZONTAR, THE THING FROM VENUS). I guess remakes are nothing new. An interesting note is that THE EYE CREATURES had its name changed at the last minute adding ATTACK OF THE to the title. Unfortunately the person doing this was not paying close attention so that in the final prints, the move title is ATTACK OF THE THE EYE CREATURES.

Paul Blaisdell and Bob Burns with Beulah, from IT CONQUERED THE WORLD. 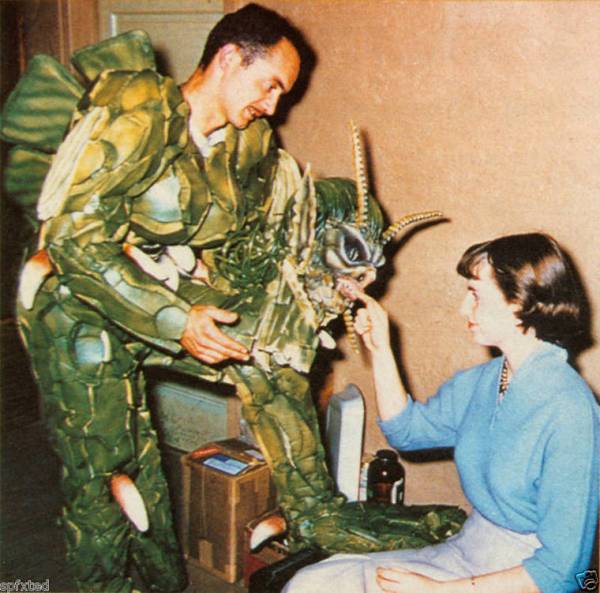 Paul Blaisdell in the SHE-CREATURE costume.

INVASION OF THE SAUCER-MEN still holds up today as a fun film and a great representation of the alien invasion films of the 50’s. It must’ve been great to see this film at the drive-in playing alongside I WAS A TEENAGE WEREWOLF (another film in desperate need of an official DVD release). Until the day comes when this movie sees an official release, we will have to be satisfied with our videocassettes that have been watched so many times that they are starting to fall apart and show wear. It’s too bad that we, as movie fans, have to support bootleggers when it comes to great films such as…INVASION OF THE SAUCER-MEN!

Next up: I MARRIED A MONSTER FROM OUTER SPACE