The next weekend, Svengoolie would return, this time appearing at Alternative Reality Comics in Mt Greenwood: a shop owned by a man named Tim Davis. Davis is pals with my fellow Goolie, Brian Bernardoni, and it’s his store window that hosts Brian’s amazing Svengoolie coffin & props when not being utilized for Brian’s Halloween yard haunt (and you can check out that fantastic set-up by clicking HERE). At last our mutual idol would get to see Brian’s great work in person which I know had always been a dream of Brians. It also gave the world another opportunity to meet Sventa Claus…the first ever outside of Comic Collector. 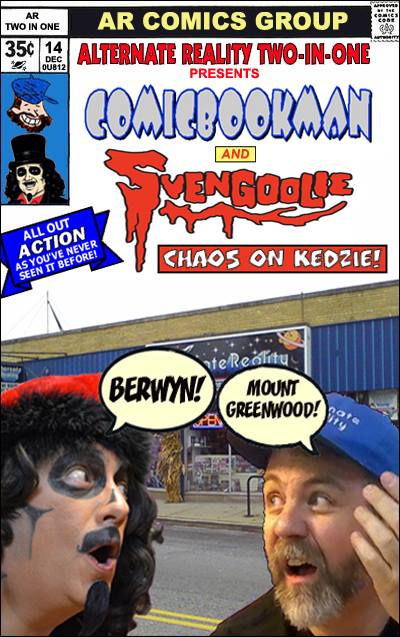 I had just left my son, Luke’s, basketball practice when we both headed up to the shop. I’d never heard of the place before despite it being less than a half hour from my place. I parked in front and saw Brian outside looking over his window display. I sent Luke outside to bring him a Frankenstein Mold-a-Rama from Brookfield Zoo (thought I forgot you wanted one of those, didn’t you Brian?). We greeted each other and took another gander at his replica coffin and props. 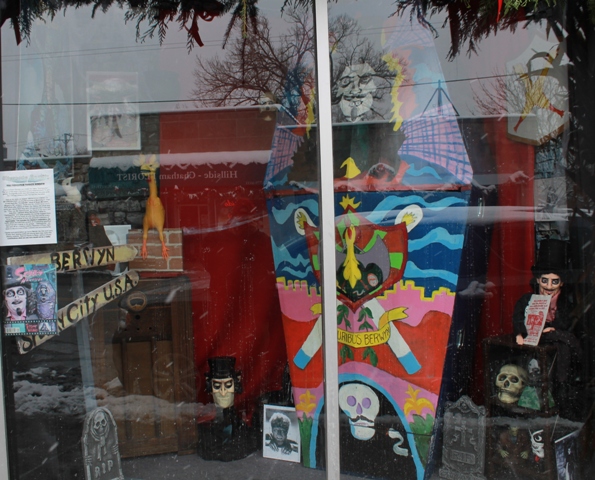 He brought me inside and introduced me to Mr. Davis and his crew. I wish I could say I remember their names but my senses were being overloaded at the sight of what I can only describe as a labyrinth of geek splendor! This place had EVERYTHING; super heroes, Dr. WHO, Godzilla, STAR WARS, LORD OF THE RINGS, and Anime presented in comic books, graphic novels, videos, gaming, posters, action figures and so much more! In fact, the presence of Svengoolie basically made the store my definition of what Heaven must looks like! 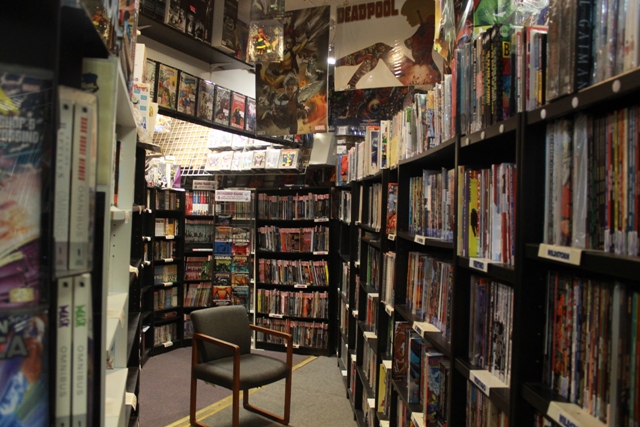 Like my previous Sventa encounter, I brought along props which included a sign I’d taken from my mom that said “I Believe in Santa.” I tried to sneak it away from her but she totally caught me. After considerable pleading, she finally agreed to let me take along with the promise I’d bring it back in one piece. Just before this event, I bought some Crayola markers and made a “Sventa” logo to cover the Santa portion of the sign (Brian’s wonderful wife, Carrie, brought duck tape as a last minute request to hold it on).

The idea was that Brian and I would be holding our Svengoolie dolls (his Fraido puppet and my doll created by the late Terry Cruikshank) with our kids holding rubber chickens adorned with bows. Sven would give his usual smile while we’d all look up in the sky with our faces appearing like a ’50s Christmas card…the very image of glee along the caption “I Believe in Sventa Claus!” Unfortunately, my picture plans didn’t quite go the way I’d hoped…

I’d left the sign in the back room awaiting Svens arrival but, during the time I was looking over the place, one of the crew nabbed it and hung it over Svengoolie’s signing area. It was now too high to be effective for any photographs I had planned but it was nice that everyone got to enjoy it (and thankfully those hooks they added were easily removed lest my mom club me with it). It was also too tight and crowded for me to get to my bag (also in the back room) and put bows on the dolls and chickens – especially with me being way back in line (which somehow managed to happen despite my being one of the first to arrive). It was neat that Tim had Santa Claus Conquers the Martians playing on a TV above to help entertain us while we waited (Tim, remind me to burn you a copy of Sven’s presentation for next time).

Oh well, I got to chat with Don & Bunny Urban and later get a nice group picture with Sventa which is as much anyone can ask for. Not to mention I’ve pestered him so many times this past year it was fortunate he didn’t mimic the Santa in A Christmas Story and chant a sarcastic “Ho Ho Ho” before booting me out the door. 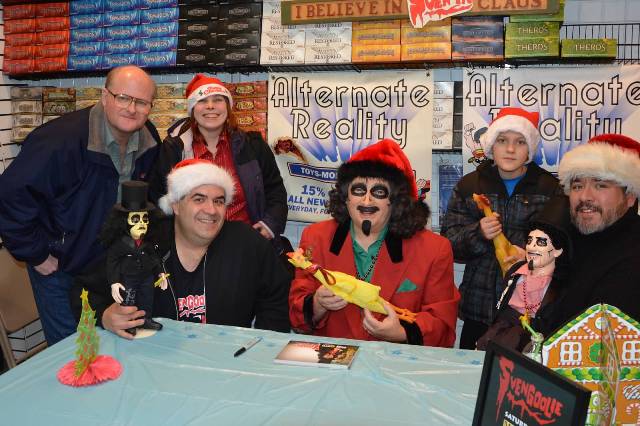 At least once I made it up there I was able to stay nearby and watch the rest of the signing (which was great because I could also keep an eye on that “Santa” sign before it got crazy-glued to the ceiling). Don and Bunny left out the back door and I didn’t even get a chance to say goodbye (Bunny, if you’re reading this, let’s do lunch!!!). Luke and I stood against the wall and enjoyed the rest of the show. And trust me, fellow Sven fans, his appearances with Jim Roche are every bit a performance. 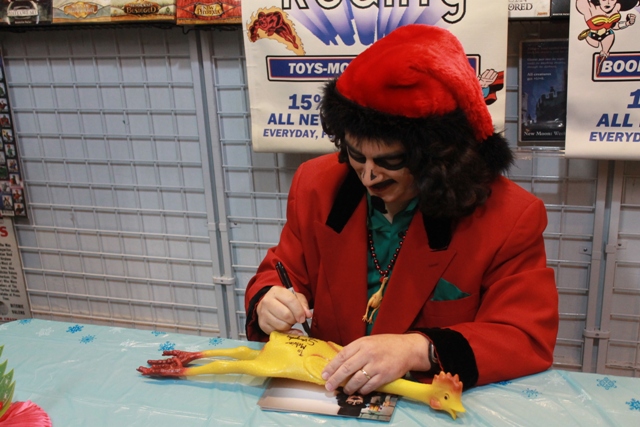 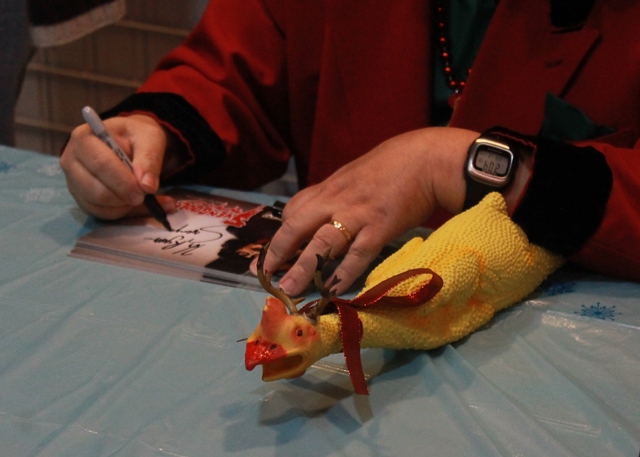 Remember earlier in this piece when I mentioned that Jim and Sven are hilarious together? Well, let me tell you, they were in even rarer form for this one! I swear if Jim ever left MeTV (God forbid) he has a definite future in stand-up comedy. Both he and Sven are QUICK on their feet when it comes to banter. A visitor came up to Sven and said, “I’m a HUGE fan of yours!” Jim replied, “Oh, so YOU’RE the one!” (okay, I’ve heard him say that before but for some reason it was even funnier today). A woman later told Sven he looked so handsome wearing his Christmas outfit. Jim wasted no time, “Ma’am, after you leave you may want to visit the optometrist down the street.”

One fan brought along a living chicken who’d last paid Sven a visit at the Ultra Foods Store in Chicago Heights, Illinois back in 2011 (as I type this I’m puffing on an imaginary pipe and saying, “Ah yes…I remember that Sven appearance as if it were yesterday….”). Sventa asked Jim if he wanted a picture with the chicken. “No, no,” said Jim. “I’m no longer allowed to take any pictures with livestock!”

Another notable guest was the Mayor of Blue Island, Domingo F. Vargas, who’s also a Sven fan. Brian knew him and they exchanged their own quips. I should mention that Brian is pretty heavily connected in Chicago politics and has a photo with Rahm Emmanuel. I should also probably mention that I’ve made it my life’s mission to never get on Brian’s bad side. 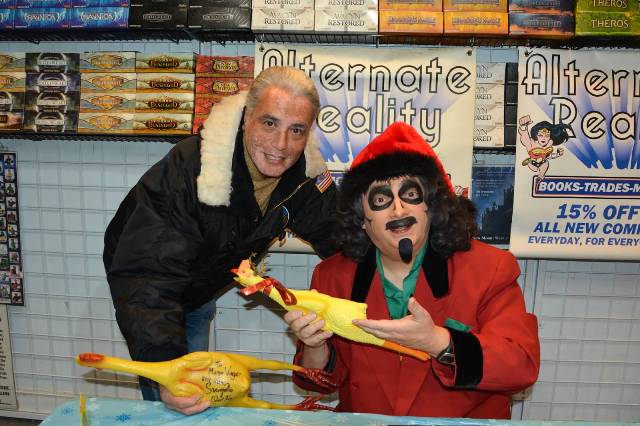 Brian had Sven sign his Jocko (cousin of Kerwyn) chicken which we joked should make an appearance on the show with Jocko having the voice of Dean Martin (to compliment Kerwyn’s Jerry Lewis). This prompted Brian and I to start singing Dino’s version of “Baby it’s cold outside” which likely had Sven pondering the mental state of his fans.

After the signing was over, Sventa headed over to the front of the store and checked out Brian’s props.

We took some funny pictures of Sven trapped in the window and I wished I’d videotaped him because, at one point, he mimicked an electronic Christmas manikin and started twisting and waving like a robot. 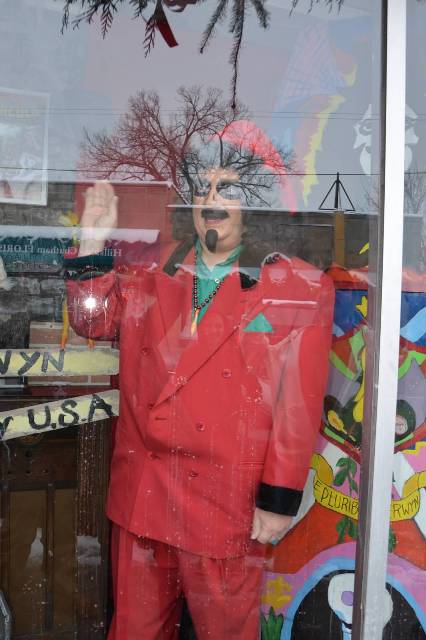 Brian went in and joined him to show off his handiwork and I respectfully made a quick exit. This was Brian’s big moment with Svengoolie and not mine. One, I might add, he truly earned. 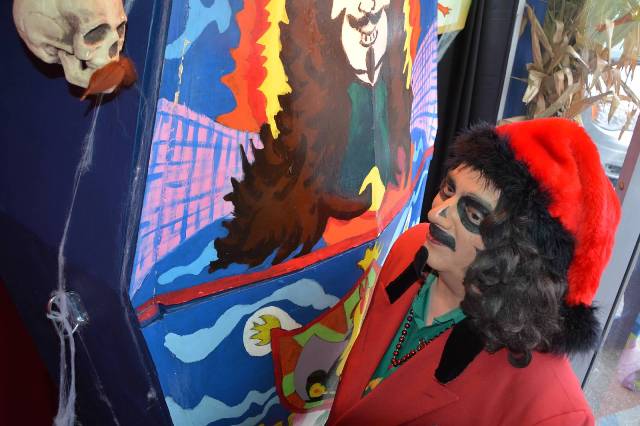 It also marked the end of another great year of appearances for Svengoolie.

I’d predicted 2013 would be a great year for the host and it certainly was (gosh I hate saying “I told you so” but click HERE and read the last lines of the blog to see that I did) with him winning his second Rondo Award, receiving a new Scary Monsters Magazine tribute issue, induction in the Horror Host Hall of Fame, an appearance in Horrorhound Magazine, a hamburger named after him courtesy of The Squared Circle Restaurant, and a legion of new fans (including celebrities) who are all living proof that Svengoolie not only survived his 2012 health scare but managed to reach even greater heights. Not to mention he looks great and he’s healthier than ever! I remember how we all prayed this time last year that he’d return…

And that, my friends, is proof that holiday wishes really can come true.

On behalf of the Terror Daves, Merry Christmas and Happy Holidays to all of our readers and especially our friend, Rich Koz! Our lives are all much better with you in it! We’re looking forward to another great year of Svengoolie appearances…provided, of course, Brian and I ever let you out.