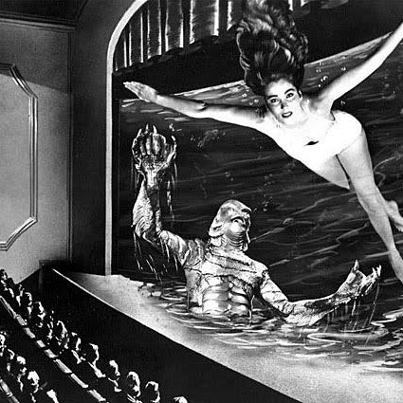 *
After getting only a few hours of sleep (due to being out so late the night before at the amazing Nightmare on Chicago Street), it was time to embark on yet another Sven-adventure! This final stop on the “Svengoolie 2012 Halloween Tour” took place up in Rosemont, Illinois at The Muvico Theater. It was here that national horror host, Svengoolie, would present the Universal classic, THE CREATURE FROM THE BLACK LAGOON, in 3D and on the BIG screen! 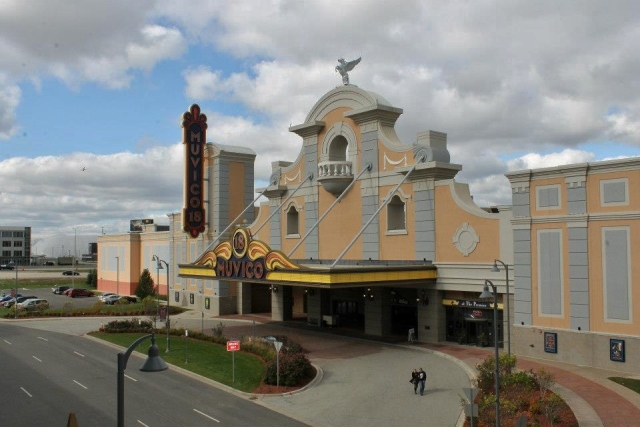 –
Muvico is a rather exclusive chain of theaters with only 9 locations in the US (mostly in Florida). Though Rosemont, Illinois is its only Midwest venue, it has the distinction of being the first ALL digital, high 4K definition projector theater in The United States. Though the ticket price is higher than average, Muvico spares no expense in pampering their guests.
–

I brought along my mom and three youngest kids for this outing, which worked out well as my mom had never met Svengoolie (and wanted to) and my oldest daughter, Leia, is a huge fan of THE CREATURE FROM THE BLACK LAGOON. This event was organized by the folks at Flashback Weekend known for their Chicago based horror convention and special horror events at The Midway Drive-In. Oddly, prior to my Terror Dave days, Flashback was the ONLY horror con I’d ever attended yet somehow, since the site began, I’d never made it back.
– 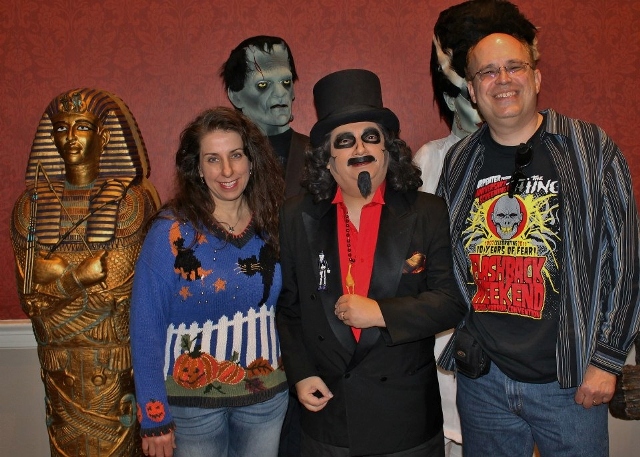 After we parked and purchased our tickets, we entered the theater and I began wondering if we were a bit under-dressed as I stepped on Muvico’s marble floors while gazing up at their chandeliers. It wasn’t long before I realized that I was in EXACTLY the right spot as I noticed, off to the right of the entrance, a line-up of Universal Monsters!
–

–
We were the first to arrive but were soon followed in by a living version of Frankenstein and his Bride. As they lumbered closer, I recognized that it was none other than Bill and Joan Yingst, who has assisted us in covering other Sven appearances when we’re unable to. The latest was her memorable visit to “Tom & Eddies” (featured HERE) just two weeks before which featured a special Svengoolie collector cup! Incidentally, special thanks to Angela Urban and Jim Roche for grabbing cups for me!
* 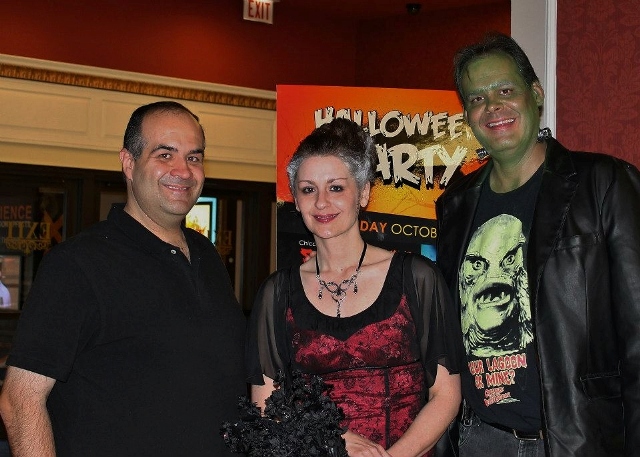 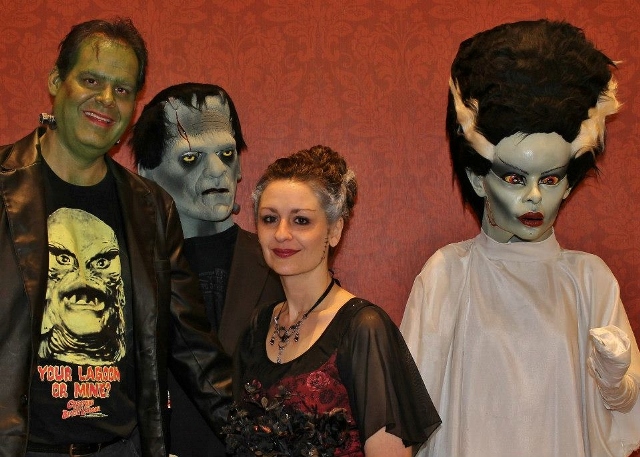 A Double Wedding!
*
It wasn’t long before Svengoolie arrived and, thank God, since it’d been hours since I’d last seen him! One glaring change since then was the absence of his assistant and great friend, Jim Roche. Jim had a much-needed day off and this marked the only time outside of Svengoolie’s holiday “Sventa-Claus” appearance that I’d not seen him with the host. This left the station no choice but to dispatch an alternate Horror Host Secret Service agent (as we often chide Jim as being) in his place.
–

Svengoolie has entered the building
–

–
After settling in, Svengoolie greeted my mother who made a point of telling him how my father was watching his predecessor, Jerry G. Bishop Svengoolie, on TV in the hospital when she was in labor with me. She firmly believes this has some significance to my eventual Sven-chasing future. Svengoolie laughed while, no doubt, being reminded of one of his own TV sound effects, “I don’t know what all that means, do you?”
–

After that she took the kids to a special activity area that the Flashback organizers had set up where they could decorate pumpkins and have treats. I remained by Svengoolie throughout his signing and, while the line never got too long, it did stay pretty constant.
–

There seemed to be two main waves of fans; those that arrived when Svengoolie’s signing began and those that timed their arrival closer to the start of the movie. This gave me a brief window of getting some shots with Sven in between!
–

It was shortly after that our friend, Jamie Lee Cortese, showed up and we talked up until it was time to get to our seats.
– 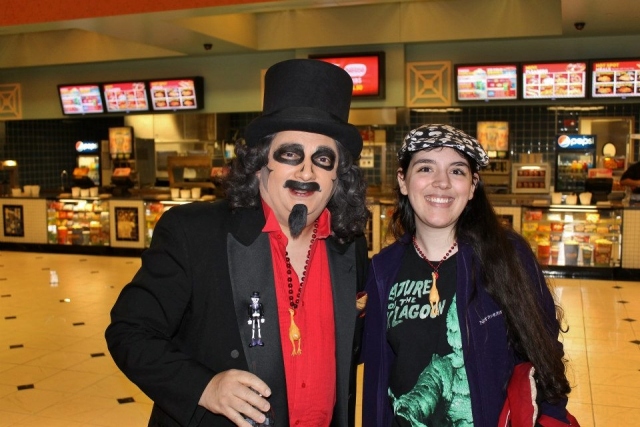 Before Sven’s arrival, a Universal Horror Historian gave the audience some background on THE CREATURE FROM THE BLACK LAGOON along with some fun facts. After getting a little break from his signing, it was now Sven’s turn.
– 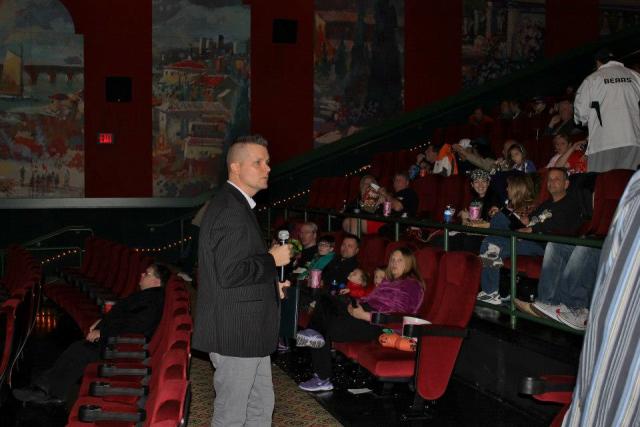 Svengoolie gets ready to take the stage
–

Once inside, Sven’s first order of business was doing a Halloween costume contest with young fans.
–

After that, Sven spoke of the last time he hosted a 3D Creature film way back in his “Son of Svengoolie” days. That, of course, would be his 3D airing of REVENGE OF THE CREATURE on UHF station WFLD. The show carries with it a bit of infamy as it angered some viewers who were unsatisfied with the 3D results. I must admit, I was surprised that he chose to talk about that situation and not his just meeting the star of today’s feature, Ms. Julie Adams, just two weeks before!
–

Aside from that, I bristle every time I hear of people complaining about that show. That movie aired when I was ten years old in July of 1982. This was six months after my parents split up and a time when fun family outings were a luxury we could scarcely afford. The news of Sven’s 3D venture spread all over Chicagoland and I’ll never forget my mom walking into the house with her groceries from “Dominick’s” and pulling out the special 3D glasses she’d picked up for us. That night we got blankets and camped out in front of the TV as she popped popcorn and made root beer floats. It was a highly entertaining family night we’d never forget. I was happy she finally got to meet Svengoolie since, despite my father’s pre-Dave viewing, it was actually her that helped cultivate my devotion to Rich Koz’s Sven.
–

As the movie was about to begin, Sven took his seat and posed for a picture wearing his 3D glasses…much more modern than the ones we used back in 1982.
–

I shook his hand before getting to my own seat where my family awaited. “Great job on another successful Halloween tour!” I said, as this was not only the final stop of his hectic weekend but an entire month of them. He thanked me, said he’d talk to me soon, and I headed to the back of the theater (my favorite spot because you can people watch). Prior to the movie he said he planned on staying only 10 minutes but he must have been impressed with the 3D because he ended up staying through more than half. I saw him tap his assistant’s shoulder before exiting the theater quietly…
–

Less than a week later Rich Koz/Svengoolie would suffer a heart attack. I remember staring at the computer screen in utter disbelief when the story broke. What does one say when their childhood idol and dear friend has fallen? It’s hard to describe to people why horror hosts mean so much to monster kids like myself. These were the men and women who brought us the movies we loved, made us laugh, and saw us through the best and worst times. The Son of Svengoolie was there to brighten my childhood and back as Svengoolie to see me through more recent struggles. It’s a situation I delve in more deeply in my next Scary Monsters Magazine article on him highlighting his summer appearances.
–
Yes, I worried I’d never see him as Svengoolie again but, even more alarming, I worried about living in a world that Rich Koz was no longer in. Since the site, I’d gotten to know the man behind the make-up and I can tell you with the utmost sincerity that he is one of the kindest, most humble, and talented human beings I’ve ever had the privilege to know.
–
Such anxieties, however, are totally unnecessary. Any fans reading who are worried about the fate of Svengoolie, listen carefully…-
This event was a chapter in his life and NOT the end of it. It’s simply the part of the book that happens right before the hero comes back; stronger than ever. I sincerely believe that 2013 will mark the BEST year in Svengoolie history to date.-
Make no mistake about it,  Svengoolie WILL be returning ….and I will be there to cheer him on.
–
Dave Fuentes~

2 thoughts on “Svengoolie Hosts Digital 3D “Creature from the Black Lagoon” on the Big Screen!”