I woke up early on Saturday and walked around Louisville snapping some pictures. The sky was overcast and I’d hoped to escape the zoo of Fright Night/Fandomfest in favor or an official one. While having breakfast at the local Panera Bread, I asked a guy sitting nearby if he knew what the weather forecast was for the day. I explained that I wanted to go to the Louisville Zoo and was hoping things would clear up. “Why would you want to do that???” he asked, as if I’d told him my plans were to dive into the Ohio River. “The Fandomfest is right down the street!”

“Don’t you understand, that’s WHY I want to go to the zoo!” I said. He didn’t understand my reasoning. In case anyone reading this doesn’t either, let’s just say that the lines and hefty fees had gotten to me. I had no choice but to stay the whole weekend in lieu of Gene Simmons only showing up on Sunday, having already achieved my other goals the night before.

It started pouring rain after I made it back to the hotel and I walked the convention one more time before deciding I was either going to hide in my room or go to the zoo anyway and get soaked. As if hearing my prayers, the skies cleared and I quickly borrowed Russ’ jeep and headed to the zoo. While I was there I received a text from my friend, J.D. Feigelson, writer of Dark Night of the Scarecrow. J.D. wasn’t a part of Fright Night this year but lived nearby and asked if I wanted to have dinner with him. I happily accepted and we spent the evening catching up.

With J.D. Feigelson at his place

J.D. wanted to make sure I was going to the upcoming Horrorhound Weekend in Indianapolis as both he and Dark Night of the Scarecrow’s Bubba, Larry Drake, will be in attendence. I enjoyed meeting Drake at the last Fright Night and agreed to go for a day despite it being on the heals of another trip (unrelated to horror).

By the time I returned to the hotel the convention portion was over (thank GOD) and Russ and I just sat and drank in our room pending the VIP party. At 10pm we were pretty buzzed and headed down to the third floor to where, we assumed, the party was. There was a band playing and all kinds of people inside but nobody checking badges. No worries for us, we went to the bar and ordered more drinks.

Inside we were joined by Scott Wilson a.k.a Hershel from The Walking Dead. I’d met him outside the day before while he was smoking a cigar and he had no problems interacting with the fans.

The biggest celebrity to join us was Michael Rooker who made his rounds taking shots with everybody.He was especially happy to interact with the ladies whom he’d photograph with his phone. One of these was known as “Thong Girl” (seriously) who had a booth in one of the dealer rooms. We’d encounter her again the next day which will be discussed in one of my Gene Simmons’ posts (of which there will be three). 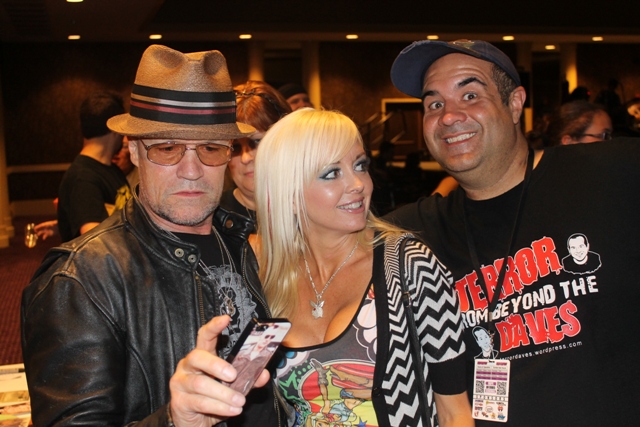 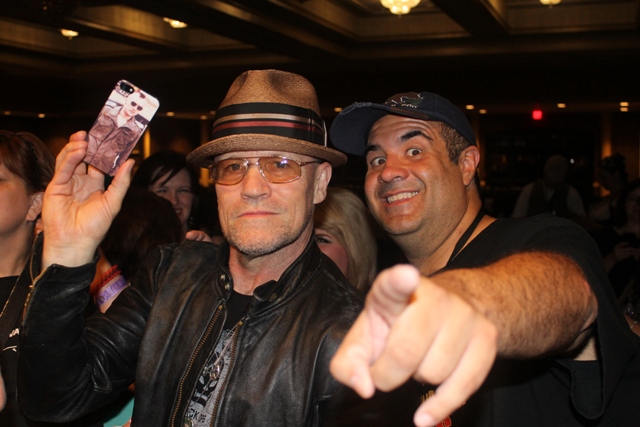 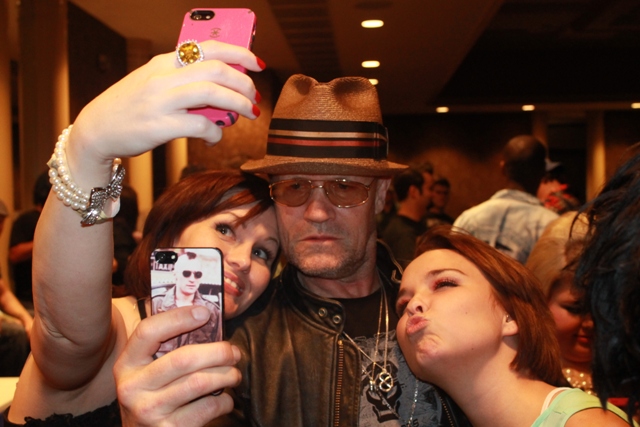 We also noticed actress, Deborah Foreman, sitting at a table and said hello to her a well.

She was VERY nice and I’ve always been a fan of Waxwork (would REALLY like to see it get a nice blu-ray release) and it was pretty nifty addition to the VIP party. Except for one thing…this wasn’t the VIP party!

Russ and I wandered into a the Horrorhound sponsored “Harley Poe” concert which was open to everyone. As it turned out, this was the best mistake we could’ve made since we spoke to a few pissed off VIP’s the next day who stated that NO celebrities showed up for theirs.

Russ went up to our room and retrieved my orange, plastic cup which he loaded with booze. When the vodka was out, he mixed my last drink with what was left of it along with Seagrams. This would prove to be a lethal concoction.

I ran into Jason Hignite and he gave me a big hug and assured me that there is no ill will between us regarding my report on the Horrorhound Horror Host Hall of Fame. I told him my intention was never to hurt him and he said, “That’s whiskey under the bridge…in fact, there’s no need for a bridge because there’s nothing bad here.”

There may not have been whiskey under the bridge but there was plenty flowing throughout this event. The next thing I knew I was having a drunken conversation with Eric Austin from the HMA outside in front of the hotel. From what I can recall, it was all  about 9-11 and conspiracy theories.

I have to say, it was a pretty fun party…even if I’d end up paying for it the next day. 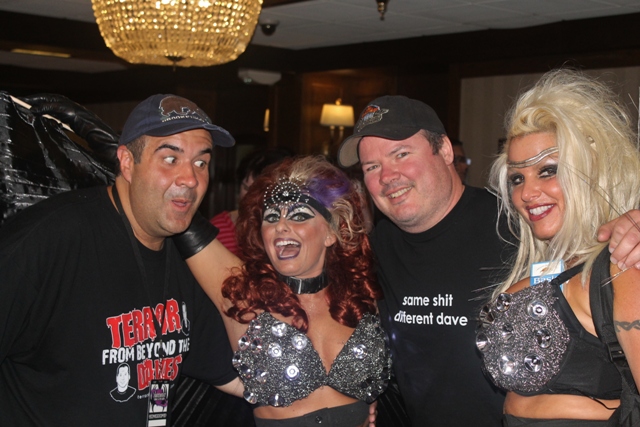 By the time I made it back to my room, Russ was already passed out and I stumbled into the bath room…just in time to throw up. I took a shower and it felt like I was in a whirlpool with everything spinning. I told Eric that the next day that I’d gotten sick and he responded, “What are you, twelve!?” Take it from me folks, vodka and Seagrams do NO mix!

The next morning I felt like I’d been run over by a steamroller. I splashed cold water on my face and went outside for some fresh air. For the next hour I began drinking large amounts of coffee and bottled water. This was the big day I’d be meeting Gene Simmons…and I had to get myself together.

Coming up…Gene Simmons sticks his tongue out at The Fright Night Fandomfest!