Friday night at Days of the Dead didn’t have quite the after party Russ and I hoped for. That wasn’t shocking since Saturdays tend to be when convention festivities kick off and it certainly wasn’t everyone else’s fault that we were only staying over on Friday. After we ate dinner the convention rooms closed but Days offered activities in the hotel lounge which included a monster burlesque show.

I can’t say we were too impressed as it consisted of just the same two girls (one loaded with tattoos which isn’t really my thing) rotating different costumes and going down as far as a thong as pasties. At one point a volunteer gal from the audience has her butt smacked by a big wooded paddle. When asked how many swats she could endure, she made the unfortunate mistake of saying “thirty.” By the time they were half-way through it had gone from sort of hot to downright cringe-worthy as her upper thighs began resembling a tomato. 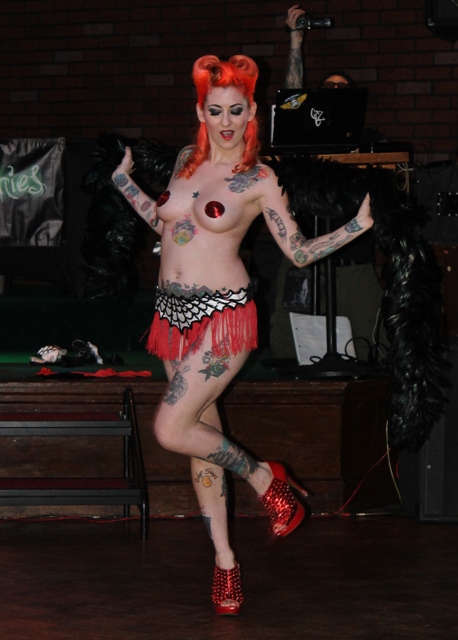 Apparently it wasn’t all that titillating for Gary Busey either who strolled in during the first performance and ended up leaving after 5 minutes.

Actually, Busey seemed to be everywhere at this convention but his signing booth. At one point he even ended up in the elevator with me (while there was a line of fans waiting at his table) which made for an extremely uncomfortable five minutes. It was just me, him, and a Days crew member with spiked blond hair that always reminds me of John Kramer in SAW.  “How are you doing tonight, Mr. Busey?” I boldly asked.

He looked up and studied me for a few seconds before saying, “Fantastic!” with the same inflection one would use if saying, “F*ck off!” I don’t know what it is about me that rubs Busey the wrong way but, unlike the last time I’d met him (covered HERE), there was no Penny Dreadful around to protect me. Fortunately he resumed chatting with SAW guy while I stared at the blinking floor numbers as if that might help the damn elevator move faster!

Instead of partying with horror folks, we spent most of night talking about horror stories at work. The next day we attended a Q&A panel on THE THING which was great. I actually hand-recorded the entire thing and hope to transcribe for this blog like I did with The Scream Queens panel during the first Days of the Dead (seen HERE) and John Carpenter one at the 2011 Fright Night Film Fest (HERE). I’m hoping to take care of that when things die down after October 31st and I’m sitting around wondering what to write about. 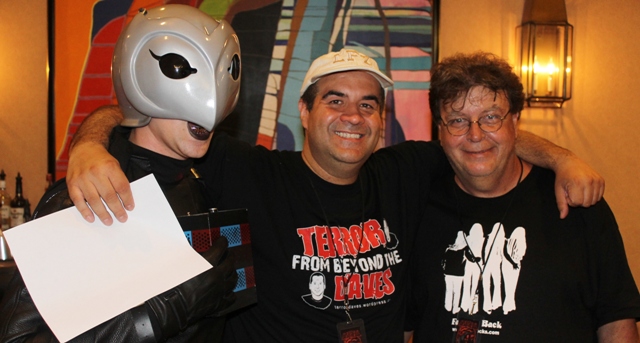 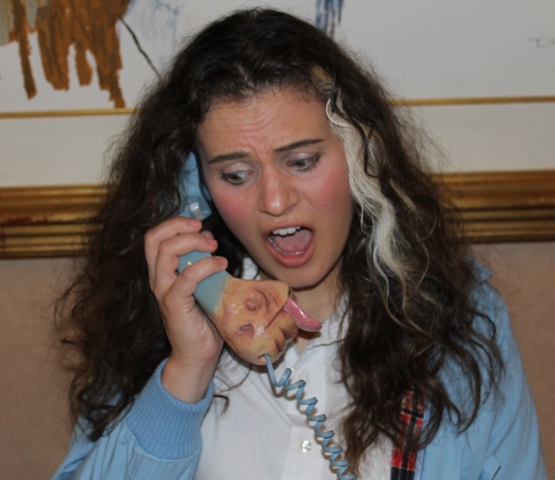 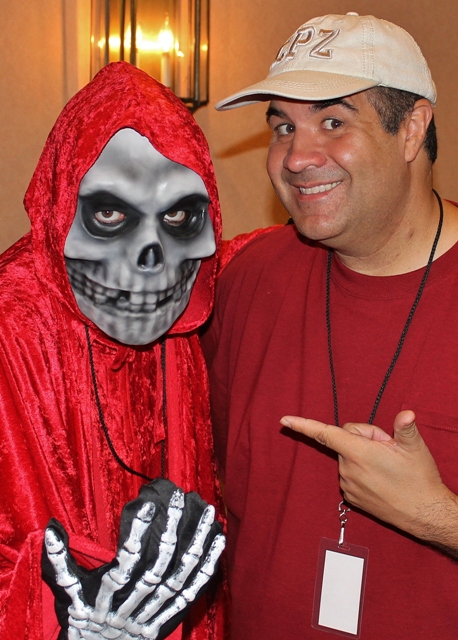 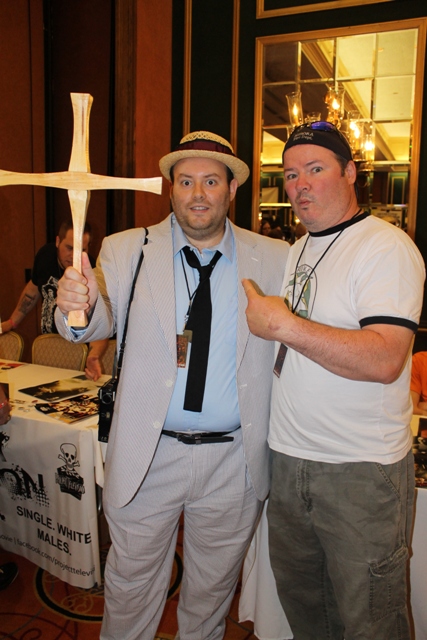 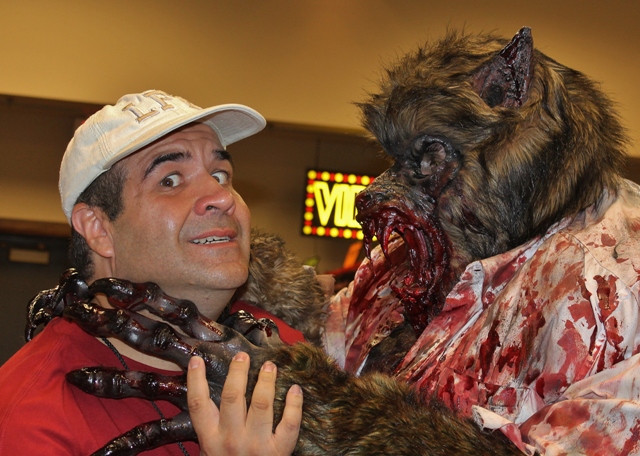 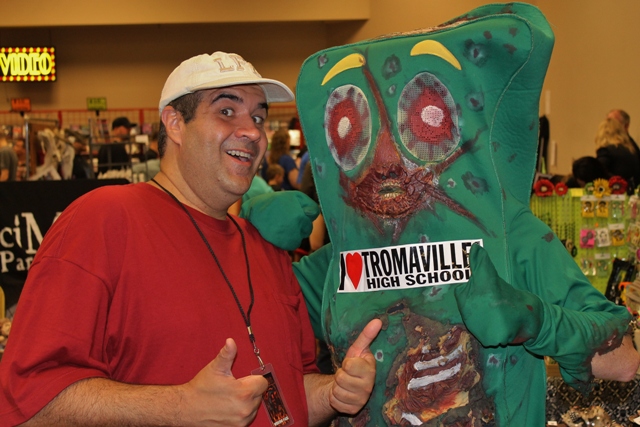 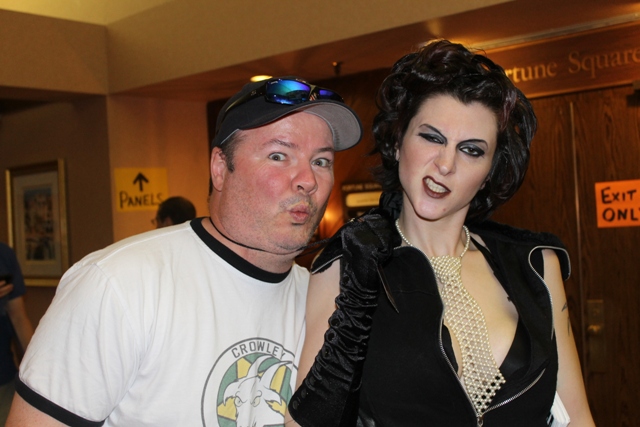 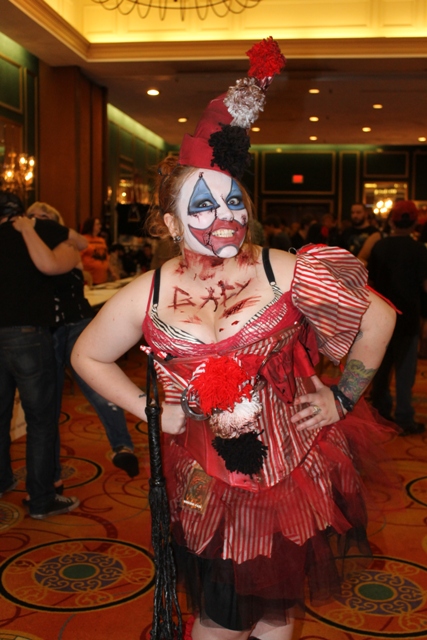 Having met our goals, we said “Goodbye” to THE THING folks and then headed over to hotel restaurant for a special errand. Russ has a friend named Missy who assists Tony Todd at events and both were present at this one. Via Missy, Russ was able to show Todd his drawing of The Crow (Todd played a character named Grange in the movie) and he loved it. He also wanted to snap some picture of Russ’ “Norris Monster”…the only one of his creations that made it back to Chicago.

Todd couldn’t have been nicer and I told him that I’d gotten a kick out of the scene where he slaps President Allyson Taylor (Cherry Jones) in Season 7 of the FOX series 24. It’s not funny that a man strike a woman, but somehow the scene ended up unintentionally comical and had all the women at my job laughing the next day.

“I hear that a lot but somehow my pictures from 24 aren’t the ones anybody wants me to sign,” he said. Note to Todd: maybe if you had a picture of you smacking the President…

Before leaving he signed Russ’ sketchbook and posed for a picture with us. Russ started joking with Russ about getting conceded regarding his artistic abilities and Russ turned to Todd and said, “Okay Tony, let’s pretend Missy’s the President…” 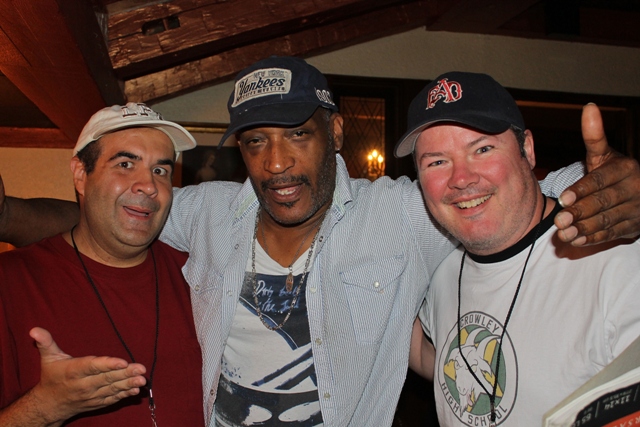 With our 24 hours over, we walked back to the car and I started going over all that we’d done. Trust me, so much happens at these damned things its hard to remember everything if you don’t take notes or, in my case, voice record everything. Having a fact-checker along absolutely helps!

…or at least it usually it does.

Dave: Okay, Russ, let’s review. Who was that woman that had the slasher cake in the elevator when we first arrived?

Russ: She was from England and had a “C” cup.
–
Dave: “sigh”…and what else do you remember about our meeting with Lita Ford?
–
Russ: She was really nice and gave me a chubby and a half.
–
Dave: Hooookay, I think that’s enough review for one day. I feel like I just attended a horror convention with the “country wolf” in that old Tex Avery cartoon.
–

–
We both laughed and I realized that this had been one of the more entertaining conventions I’ve ever attended and that it was in no short thanks to Russ. “Thanks for coming along,” I said. “You’ve really brought back a lot of energy that’s been missing from this site for a long time. I really appreciate that.”
–
“No problem, Dave!” he replied. “Like Karen Carpenter says, We’ve only just begun.”
–
Next up…Coverage begins on the 2013 Fright Night Film Fest!
–
Dave Fuentes~