During the first official DAYS OF THE DEAD convention, guests were treated to a panel of “Scream Queens” which included PJ Soles (HALLOWEEN & CARRIE), Linnea Quigley (RETURN OF THE LIVING DEAD, HOLLYWOOD CHAINSAW HOOKERS, & NIGHT OF THE DEMONS), Mark Patton (NIGHTMARE ON ELM STREET 2: FREDDY’S REVENGE), and Heather Langenkamp (NIGHTMARE ON ELM STREET parts 1, 3, and 7). The event was hosted by Nasty Neal from WITHOUT YOUR HEAD who encouraged guests to walk up to the stage and ask questions of this unique gathering of screamers. For those unable to attend, below is an overview….

QUESTION TO PANEL: HOW DO YOU FEEL ABOUT BEING CALLED A “SCREAM QUEEN?”

Heather Langenkamp: Considered herself more just an average screamer than “scream queen.” First saw the term used for her in a magazine and was “offended.” As the years went on she learned to embrace the title.

Linnea Quigley: Saw the term used for her in People Magazine and, having grown up with Creature Features and Vincent Price films, was honored!

Mark Patton: “I knew I was one when I was five!” (audience laughs). At first when he heard homosexual jabs at NIGHTMARE ON ELM STREET 2 it “hurt a lot.” When Heather Langenkamp found him in exile while creating NIGHTMARE documentary he learned to embrace it. Discovered that there was a list of top film “screamers” in which Jamie Lee Curtis was number one. Mark motions to Heather and Linnea and states, “You’re looking at 2, 3, and 4 right here!” Would not elaborate on which ones were what number.

QUESTION TO PANEL: WERE YOU FANS OF HORROR PRIOR TO LANDING ROLES IN THE GENRE?

Linnea Quigley: Grew up watching Creature Features and loved films such as MURDERS IN THE RUE MORGUE, and Alfred Hitchcock films, and Dario Argento’s DEEP RED. “So yes,” says Linnea. “I was a horror fan!”

Mark Patton: Father (against mom’s wishes) took him to a drive in and saw STRAW DOGS, THE LAST HOUSE ON THE LEFT, and IN COLD BLOOD (which gave him nightmares). Mark said he was a fan of film in general and not exclusive to horror.

Heather Langenkamp: Had a “wholesome” upbringing and was not a horror fan. The scariest film she’d ever seen prior to NIGHTMARE ON ELM STREET was BURNT OFFERINGS. Had never seen a bloody film before and thought NOES was over the top.

PJ Soles (arrives late due to being held up by fans): Had an International upbringing and did not arrive in The United States until she was a teenager. As a result she had very little exposure to TV or film and would later consider herself more a fan of Woody Allen style comedies.

Mark Patton: Recalls sitting outside of the first NIGHTMARE ON ELM STREET auditions with Heather Langenkamp and remembers her contemplating whether she should even seek the part as opposed to returning to school.

QUESTION TO MARK PATTON: YOU HINTED AT A NIGHTMARE ON ELM STREET PREQUEL. CAN YOU TELL US ABOUT THAT? 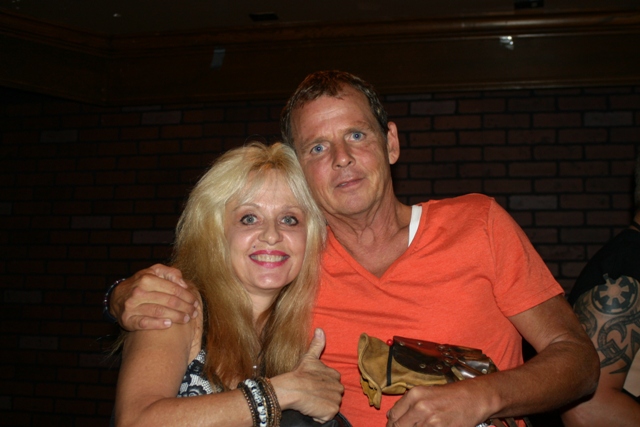 Mark Patton: Says that its not an official NOES prequel but more an “omage.” Signed on in Germany and was paid $50,000 (so its official). The story takes place 50 years ago and features a serial murderer (played by Patton). Filming begins this September in Europe.

QUESTION TO MARK PATTON: WHAT YOU HAVE CHANGED ABOUT YOUR NIGHTMARE ON ELM STREET CHARACTER, JESSIE?

Mark Patton: Would have made the character darker and suicidal. See previous post where Mark elaborates on this HERE.

QUESTION TO THE PANEL: WHAT ARE YOUR FAVORITE QUOTES FROM YOUR FILMS?

Linnea Quigley: “Do you ever fantasize about dying?” (RETURN OF THE LIVING DEAD)

PJ Soles: “They’re all gonna laugh at you!” (CARRIE) PJ says that although the quote was not from her character she uses it all the time as a joke back at home.

QUESTION TO PANEL: WHAT IS YOUR FAVORITE ON-SCREEN MOMENT?

Mark Patton: The transformation scene in NIGHTMARE ON ELM STREET 2 as well as the scene where the character Grady dies.

PJ Soles: Being made an honorary Ramone in ROCK N’ ROLL HIGH SCHOOL.

Linnea Quigley: The “Run Judy, Run” scene from NIGHT OF THE DEMONS.

QUESTION TO PANEL: IF YOU COULD PLAY ANY ROLE IN ANY MOVIE EVER MADE, WHICH WOULD YOU CHOOSE?

Linnea Quigley: I’d love to play Faye Wray’s character in the original KING KONG even though she, herself, was not a fan of the term “Scream Queen.”

Mark Patton: Says he’d play the lead character in the film CARRIE or her mother. Says he wouldn’t be adverse to playing a character that was a little of BOTH.

Heather Langenkamp: Would have loved to have worked with (or even observed the work of) Alfred Hitchcock. Said she’d love being in THE BIRDS or PSYCHO.

PJ Soles: Agrees with Heather and said she’d have loved to have done the shower scene in PSYCHO – provided her character could have fought back on Norman Bates by “grabbing the knife and flinging it back at him.” Says it has always been her dream to work with Quentin Tarantino whom she’s a big fan of. Says she wishes he would call her. Heather Langenkamp interjects, “He’s too afraid of us!” (audience laughs). 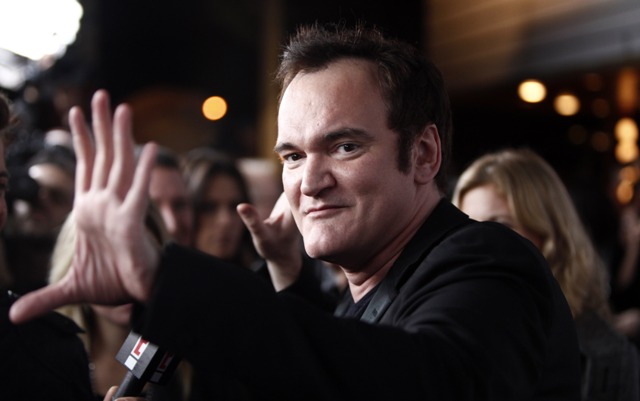 Attention Tarantino: Give PJ a call!

Mark Patton: Says “no” and that all of the original cast members were bypassed for the new series. Stated that they are indeed making a new version of FREDDY’S REVENGE with the character of Jessie to be played by an English actor.

CALLER THANKS MARK AND ASKS TO SPEAK WITH HEATHER. MARK DRAMATICALLY HANGS UP ON CALLER AND HANDS PHONE BACK TO NANCY LOOK-ALIKE. AUDIENCE BREAKS INTO LAUGHTER.

QUESTION TO PANEL: WHAT ARE YOUR FAVORITE, AND LEAST FAVORITE, SPFX MOMENTS IN YOUR FILMS?

Linnea Quigley: Doesn’t like any effects that requires her to have appliances on her face. She doesn’t like the smell of latex and during the filming of RETURN OF THE LIVING DEAD and NIGHT OF THE DEMONS the make-up was water proof and she couldn’t get it off between the late nights when filming stopped and early mornings when they resumed. Did not mind having breast or body appliances but leave the face alone!

Mark Patton: Doesn’t like CGI. He did like the transformation scene in FREDDY’S REVENGE because he appreciated the creativity that was involved.

Heather Langenkamp: Likes the death scene of Tina in the original NIGHTMARE ON ELM STREET. Without hesitation she said she disliked the “slithering tongue” scene in part 7. Said that effects guru, Greg Nicotero, was making inappropriate sexual “KY jelly” jokes during the filming which she not only found to be “unfunny” but the cause for an entire therapy session regarding it.

PJ Soles: Disliked her death scene in CARRIE where she is hit with a fire hose. Said that she was hit full force in the side of the her face and had her eardrum ruptured. The entire footage of her passing out was REAL and left in the final print. “It looks great,” she said, “But hurt like hell!” Her favorite effect was also from CARRIE in which she credits her Oscar winning co-star, Sissy Spacek, for showing her true devotion as an actress. Spacek was married (and still is) to the film’s effects director, Jack Fisk and insisted that it be her own hand that comes out of the earth during the films final climactic scene.

QUESTION TO PANEL: WHAT WERE YOUR FAVORITE COSTUMES?

Heather Langenkamp: Likes the pajamas that she wore in NIGHTMARE ON ELM STREET. Says she still has them and tried them on recently for her new DVD cover I AM NANCY. Says Johnny Depp had a petite frame and the wardrobe department kept mixing up their blue jeans.

PJ Soles: Likes the clothes worn in ROCK N ROLL HIGH SCHOOL because she bought and wore all her own clothing for the film.

Linnea Quigley: The outfit she wore in RETURN OF THE LIVING DEAD with the skull in the crotch.

Mark Patton: The Fred Segal wardrobe (in which he was allowed to keep) in FREDDY’S REVENGE. Also liked the overalls worn in COME BACK TO THE FIVE & DIME JIMMY DEAN. A scene in the film depicting his character’s rape, illustrates the importance of that outfit in creating effect (without showing a graphic depiction).

QUESTION TO THE PANEL: WHAT IS YOUR FAVORITE GIFT FROM A FAN & TATTOO SHOWING THEIR FANDOM?

Linnea Quigley: A fan gave her his class ring and another made a moonstone necklace (worn during this panel). Says she is grateful for all the gifts created for her by the fans. Is always a bit shocked when she sees tattoos of her image but really likes the ones of her character “Trash” from RETURN OF THE LIVING DEAD.

Mark Patton: Sees a lot of Freddy tattoos but was sort of “freaked out” when he saw one of himself (and what part of the body the fan tattooed himself). Says that any gift created for him by fans is made with love and he truly appreciates that. Recalled his first fan letter written by a woman in Japan.

Heather Langenkamp: Pointed to a member of the audience with a Nancy Thompson tattoo. Loved a gift given to her at DAYS OF THE DEAD from a fan who created a Nancy Thompson Teddy Bear. Says she found the gift both cute and sweet.

PJ Soles: Says she sees a lot of Michael Meyers tattoos but her favorite fan tattoo was of Joey Ramone singing (on a woman’s leg). Says she signed the tattoo and the fan returned to show her how she had tattooed the signature. Loves a 16×20 drawing given to her by a fan that depicted her in her various roles. Did NOT love having to carry the picture back on the plane home. Also recalls a family that pushed their baby up in a stroller and told her that they named her “Riff” after her character in ROCK N ROLL HIGH SCHOOL.

PJ Soles with a fan at DAYS OF THE DEAD

After the panel ended, the group of Scream Queens stood up and proved why they were worthy of their titles…. 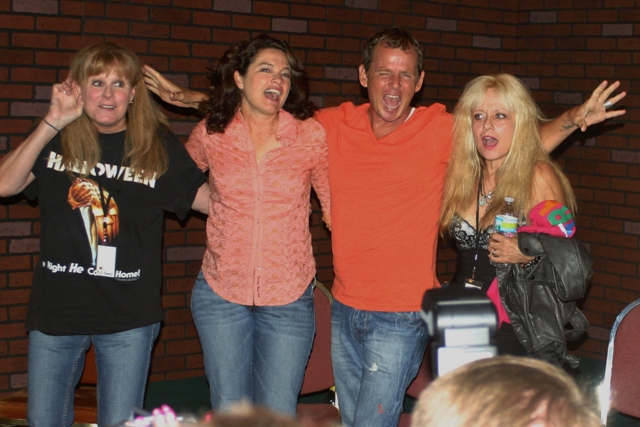 DAYS OF THE DEAD coverage continues with ” Meeting Ace Frehley!”