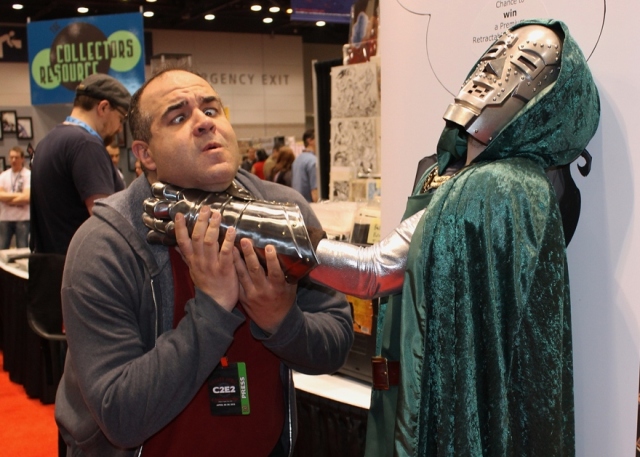 Back in my junior high and high school years, I admit to being a pretty serious collector of comic books. This was back in the early ’80s and well before The X-Men, Wolverine, Spider-Man, Batman, and The Avengers would all become modern day pop culture & box office phenomena (as I write this post, Iron Man 3 just pulled in $175M on it’s opening weekend here in the US). Unfortunately, back in my day a guy needed to downplay his love of super heroes lest he receive daily wedgies from the school bully while consistently repelling members of the opposite sex.

I discussed my comic book history back when I reviewed The Avengers movie last year (seen HERE). This year I decided to use the C2E2 (Chicago Comic & Entertainment Expo) occasion to not only cover the Return of Svengoolie (see last post) but also as an opportunity to reconnect with my comic book past.

I’d be attending the event with my friend, and devoted comic collector, Steve Gill. Steve and I met over 15 years ago via a mutual pal but only recently (thanks to the wonders of social media) discovered we had enough in common to successfully hang out together on our own.

Since that Avengers post, I did eventually dig up those old, dusty comic boxes and go through them. The majority were Marvel titles as I tend to be a “loyal to a fault” kind of a guy and that had been the comic company I was most drawn to. I loved ROM the Spaceknight (which I covered in the earlier days of my blog HERE) as well as Spider-man, The Uncanny X-Men, and The Avengers. So I decided to focus on one of those titles while using C2E2 as a means of filling in some gaps. But where to start? 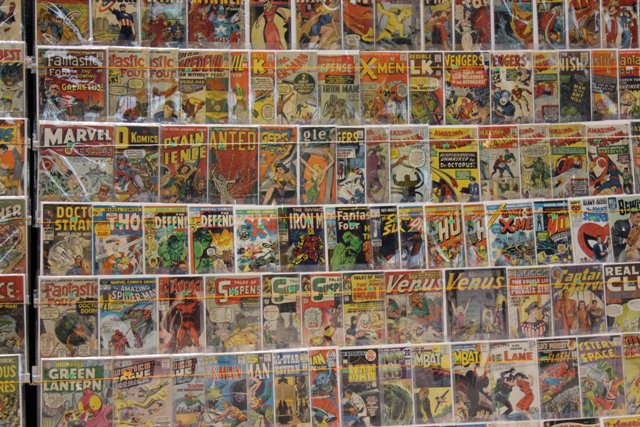 My first impulse was to gravitate towards The Amazing Spider-man. Now there was a super hero that understood the meaning of human suffering! Actually I should mention that, even in the comic loving realm, my fandom of Spider-Man made me something of a pariah. I was one of those weird guys that preferred his black costume (I thought it made him look more like a real spider) over his red & blue duds, found his enemy The Hobgoblin more menacing than his predecessor (The Green Goblin) and thought The Black Cat was more alluring than Mary Jane Watson…with Kristen Dunst’s portrayal in Spider-man 3 solidifying that assessment. 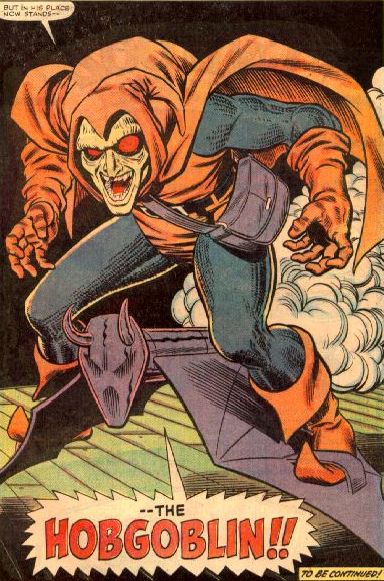 Tell me this is not one badass looking villain!

Hmmm…movies aside, I wondered what Spider-Man had been up to in the comic books these days? After a quick Google search, I discovered that he (Peter Parker) is currently dead and Dr. Octopus has since inherited his body…carrying on the legacy of Spider-Man.

Hoooo-kay, guess good ole Spidey is going back into storage!

Next up…The Avengers! After looking through my stash, I discovered that if I strategically purchased just a handful of comics, I’d have over 200 issues of the series running straight through. So, without bothering to go through my X-Men titles, I decided that Earth’s Mightiest Heroes would suffice!

Steve also had a specific list of comics he was looking for (mostly Captain America) and wanted us to arrive early which would prove a wise decision as, by afternoon, the place was packed!

The event took place at The McCormick Place which, for those unfamiliar with Chicago, is ENORMOUS! After walking what seemed like two football fields just to get from the parking garage to the convention hall, we finally made it inside.

The Hall of (physical) Injustice

What I like about this event is that it inspires a LOT of genre enthusiasts to dress up in homemade costumes. I think I mentioned in last year’s C2E2 post (covered HERE) that, since we geeks inherited the Earth, comic fans have gotten a LOT more attractive. There were plenty of good looking guys and hottie female fans decked out in revealing super hero outfits; a far cry from 25 years ago when I’d of done anything to find a gal to talk nerdy to me.

As we walked in, we were greeted by Godzilla, himself! This Godzilla, played by Billy Dubose (who must have lost 20 pounds in sweat that weekend), is someone I see every year in July at G-FEST (Godzilla Festival)!

What’s great about C2E2 is that it’s a hodge podge of different genres that all come together for a single event. So fans of super heroes, science fiction, horror, and just about anything else you can think of, fit right in! Seriously, where else can you find Superman having a casual conversation with a pair of STAR WARS stormtroopers? 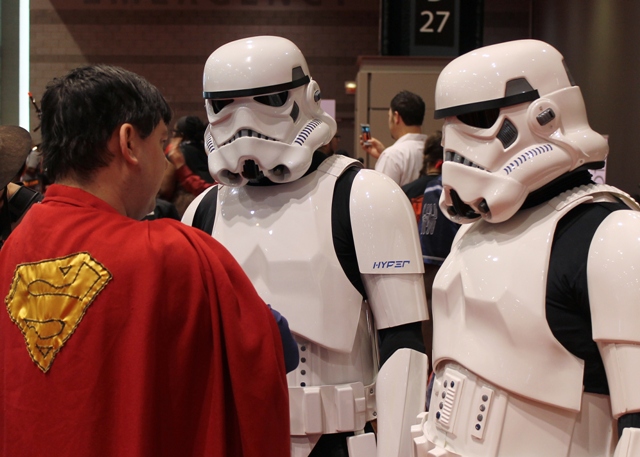 You definitely don’t need to see HIS identification!

We decided to start at the far right of the hall and weave our way through every aisle. I’d always want to stop and take pictures of fans but Steve was focused solely on the comics; often disappearing after I snapped a photo of someone. Note for next year: also bring along my son, Alex, as my indentured photographer. 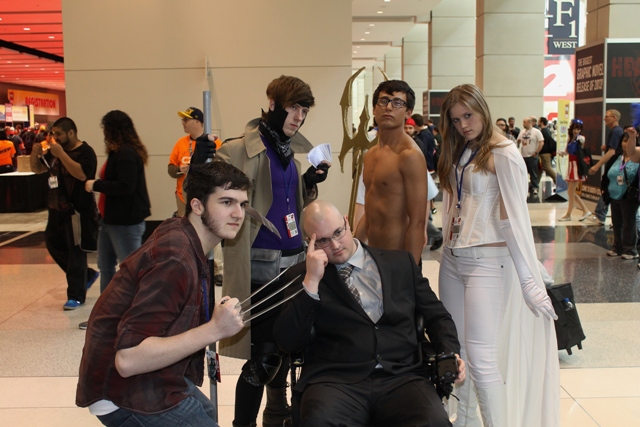 Soon I started locating some of the issues on my list and my eyes rolled back white as my old “thrill of the hunt” collector instincts kicked back in! Of course it was probably a lot more thrilling when I was younger rather than today when you can pretty much find whatever you want on-line. Regardless, I was having all kinds of nostalgic flashbacks and, I’m sure most will agree, its much more gratifying when you hunt old school.

Since every time I’d stop to photograph someone, Steve would disappear, I eventually gave up and told him we’d separate and meet later at a designated spot. 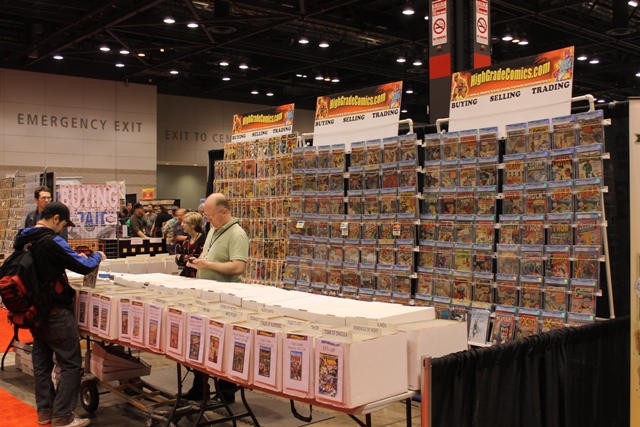 During our split, I went over to the “Artists Alley” to meet up with an artist named David Rodriguez. David’s Aunt Maria has a desk next to mine at the hospital we work at. She often brags about her talented nephew who’s made his dreams come true by leaving Chicago for New York City in pursuit of a career in comics. With few people in this world ever living out their childhood ambitions, her pride is certainly warranted.

David had his own series of comics called Starkweather and will soon see the release of a zombie comic called Zombie Dawn Safehouse to accompany an independent film titled Zombie Dawn. 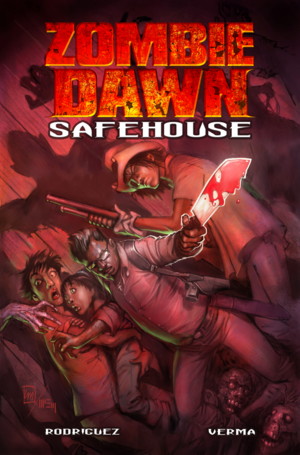 After snapping more pictures of fans (btw my next post will feature more of those shots) I pulled out my list and went back to searching for more missing issues. This lead me to a dealer called Big Ben’s Comix Oasis. Looming above the comic books was a sign that read, “All comics $3 each or 10 for $20.” Unbelievably, I thumbed through the boxes and found the rest of the missing comics I’d been searching for…and at this amazing price! Better still, they weren’t “geechie” (Steve’s word for worn out comics) and in decent shape!

“I was just trying to call you!” I turned around and he was standing nearby holding a pile of books he’d just selected.  “I can’t believe the deals they have here!” he said, mirroring my own sentiment. His enthusiasm was understandable. Believe me, since the advent of The Internet and television programs like “Antiques Roadshow,” finding good deals at fan conventions is about as easy as selling a drowning man a glass of water. Come to think of it, I couldn’t remember seeing anything this good back in the day either!

As if sensing our concerns that if it looks too good to be true it usually is, the man running the table announced, “The more I sell the less I gotta carry out of here!”

Within twenty minutes I managed to fulfill my Mighty ambitions while also adding a few from where I’d left off in the early ’90s. Woohoooo! Steve managed to get a lot checked off his list as well which was great as he gravitated towards rarer and pricier landmark issues. 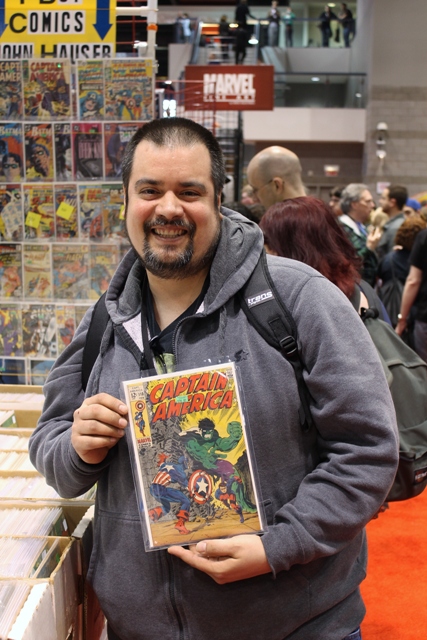 After this haul (in which we made a pact that we’d visit these guys FIRST before anyone else next year) we went outside for some fresh air. Then it was time to focus on the Svengoolie portion of the event (already covered). Ultimately, it was a busy but fulfilling day and, while I don’t intend to return to serious comic collecting any time soon. It was a lot of fun reliving those days while looking forward to sitting back and reading twenty years worth of Avengers comics in a row.

But this time I can do it outside in broad daylight without having to pretend I’m looking at Sports Illustrated instead.

2 thoughts on “C2E2 and the Thrill of the Comic Book Hunt!”