Still reeling from The Horror Host Hall of Fame, I went across the street with my friend, Russ Wrangler, to that gawd-awful Crown Plaza restaurant I mentioned earlier. It was Saturday and Horrorhound Weekend was now in full swing, though the lines seemed to be moving quicker (not quick, just quicker). We ate lunch while watching Dr. Destruction storm out again due to the service (for some reason that never got old) before Russ and I returned to the convention to do another walk through.

Eventually we split up as Brian Maze summoned me to man his booth and give him a break. As he’d saved me a LOT of anguish at this event, I was only too happy to do so. He came back later and was mildly irked that sales seemed to improve when I was running things. I told him it was no doubt due to my training at the zoo I volunteer at, as you’re taught early on how to not only entice strangers but to feel out who’s interested in hearing your spiel and who isn’t (though I confess I’d never used these skills to garner sales before). Ultimately, I was pretty sure Brian’s talent sold itself and, as I handed him his cash, I also shared many of the deserved compliments his work had inspired.

Brian’s “The Usual Suspects” was a big seller at Horrorhound!

One of his customers was wearing a KISS shirt and I immediately used that as a means of engagement. My fellow “Terror on Tequila” pod-caster, Jason Lucas, is an expert on the band and our dealings with each other for the past 24 years had granted me a crash course on KISS by association. So much so, that I can pretty much hold my own in most conversations with their diehard fans (as in this case) though that should not imply that I don’t consider myself a fan as well. The gentlemen ended up buying some of Brian’s KISS inspired works and I came across him again that day working at his own booth. I noticed KISS photos for sale at his table only these were like none I’d ever seen before. While the logo and costumes were familiar this band was all FEMALE! 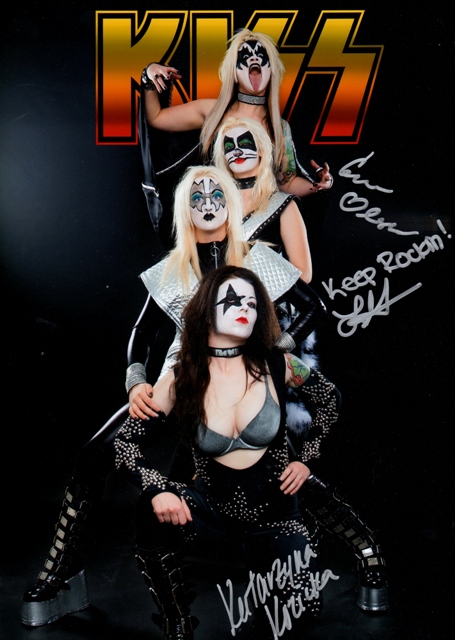 The company was Lost or Forgotten Photography which specializes in shots featuring the female form in various costumes and macabre set-ups. Their site (which you can access by clicking HERE) shows some of their more sinister pics but, on this day, it was KISS that ran the gambit and brought new meaning to the phrase Hotter than Hell. 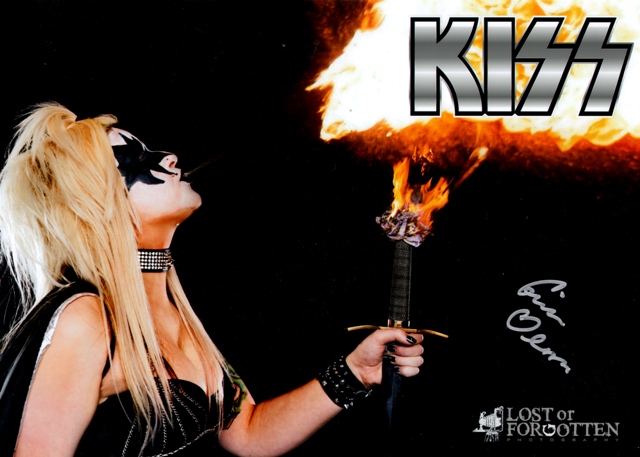 One of the proprietors came up to me and explained that these gals had actually been featured in a recent KISS tour book. He said that if  I bought their package of photos, the ladies would happily sign them once they’d all assembled. Well, at least three of them would as “Peter Criss” had just had a baby (yes, you read that correctly). Apparently, despite her condition, this rocked out Cat-woman was still a good sport as the proprietor popped out his digital camera and showed me the model in her advanced stages, nude like Demi Moore in her famous Vanity Fair cover. While it was similar, there was one obvious difference as this one featured the impression of a demonic face poking through her bulging tummy. Despite their having a missing member, I figured I’d be able to bring back some souvenirs for Jason and my friend, Steve Gill, and bought the pictures. 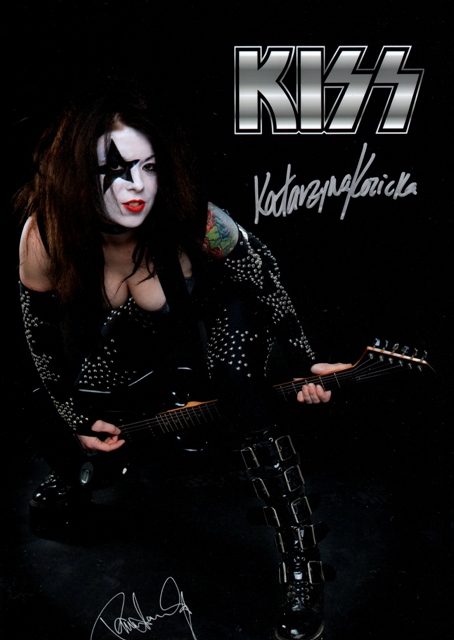 After being summoned back to the booth via text, the ladies got together and signed the pictures. I’m not sure which one played Ace Frehley but I’m guessing she was the last to arrive (see my meeting with Ace HERE). Unfortunately, they weren’t in their KISS regalia but still had on some rather enticing, if not gruesome, attire. 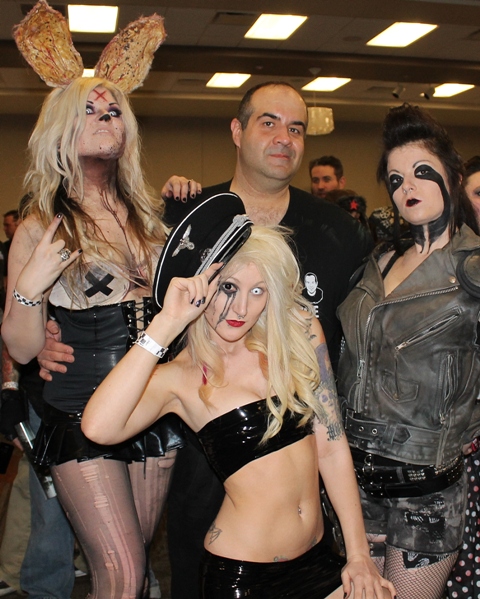 After leaving their booth I figured I’d run around and snap more photos of fan costumes (see previous posts). This led me to one of the rooms reserved for the celebrities and, having met the KISS ladies, figured it was time to garner a few more noteworthy encounters…

Coming up next…Why you should NEVER try and sell Michael Madsen a pair of sunglasses!