Well, it was bound to happen…

Since rising up from their graves, zombies have stumbled their way into just about every facet of our popular culture. This is evident through their slow, yet steady take-over of both the small screen (via the success of AMC’s The Walking Dead) as well as fresh new films (independent and main stream) spreading like a contagion all around the world each year. These movies highlight zombies both slow-moving & fast; some offering variations of zombie lore and differing explanations (if any at all) as to why the dead would suddenly return to feast on the living. Some of these movies have even gravitated from horror into comedy (affectionately referred to as a “zomedy” in some circles) with great success e.g. SHAUN OF THE DEAD & ZOMBIELAND. We now have yet another genre for zombies to infest…teen romance!  And as we’ve seen with those damn TWILIGHT films, monsters and romance (though leaving a bad taste in most horror fan’s mouths) does translate well at the Box Office.
–
Last week, my friend Elizabeth asked if I was interested in going to see WARM BODIES (directed by Jonathan Levine) with her and, although I hadn’t heard of it, readily agreed after she mentioned it featured zombies. I didn’t bother myself with previews nor reviews because I wanted to walk in “cold,” free of preconceived notions. Then, shortly after arriving at the theater, I fought to keep that open mind as I watched a steady stream of giggly, pre-pubescent girls take their seats. By the time the previews came up I felt like Elizabeth and I were teaching junior high at an all-girl school, preparing to show our students Romeo and Juliet. Actually…that wasn’t too far from the truth.
–
The story is narrated via the thoughts of our star zombie (played by Nicholas Hoult) who can’t recall his name but is later christened “R.” While we know very little of “R’s” previous life, I’m guessing he was a teen model for Old Navy.
– 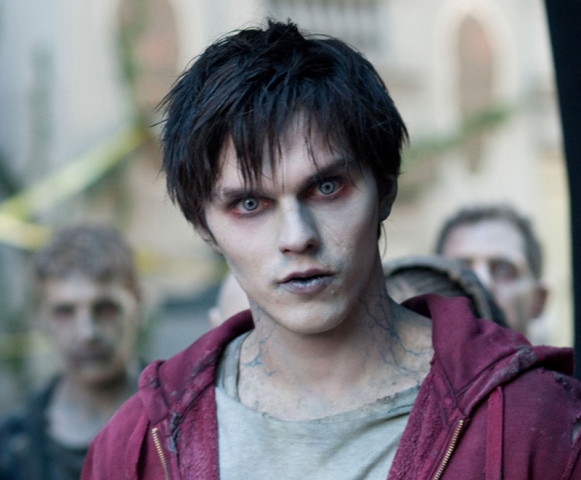 –
“R” spends his days hanging out with other zombies at an airport; fashioning one of its abandoned jets as his own zombified apartment, complete with phonograph and collection of odds and ends that he’d picked up while scavenging. He also has a best friend (referred to as “M”), an older zombie whom he sits with each day at the airport cafe and stares and grunts at (occasionally creating actual words here and there).
–

M & R Spells “Friendship”
–
Since WARM BODIES provides us with First Person zombie commentary, we’re given a unique perspective as to what it’s actually like as a member of the living dead. For example, we get an explanation as to why many zombies find our brains to be such delicacies. Apparently, when a zombie eats a brain, they are given images and emotions of the victim’s former life. Since zombies don’t sleep, this is as close as they get to actually “dreaming.” NOTE: If what you just read caused you to say “Awwwww!” you are clearly the right audience for this movie.
–
Yes, it’s a sad existence, but certainly better than that of the “bonies.” These are described as zombies who’ve “totally given up” on themselves and, having fallen into the lowest form of undead despair, peel off their clothes and skin completely to devolve into a living CGI skeleton who are fast moving and spell certain doom to anything with a heartbeat. “R” doesn’t bother with these ghouls, nor many other members of the undead, and is content in his solitude. That is until he sees Julie (played by the alluring Teresa Palmer).
–

Just when you thought becoming a zombie was the lowest you could go!
–
Julie is the very-much-alive daughter of General Grigio (John Malkovitch) who is the cold-blooded, zombie hating leader of a human settlement located near “R’s” airport. The star-crossed lovers soon meet as Julie and a couple pals (including her boyfriend, Perry) leave the security of their new “gated” community in search for supplies while “R,” coincidentally, is out with his fellow zombies looking for flesh.
–
After a violent meeting between the two groups, “R” becomes enamored with Julie and carries her off while fending away his hungry peers. He then takes her back to his place and soon “R and Julie” (have you figured out the whole Shakespeare thing yet?) develop feelings for each other. BTW this works out fine since “R” ate Perry’s brains and Julie is now single again. It also sparks the transformation of “R” from living dead to living once more…something that starts spreading to “M” and the other zombies as well. This doesn’t sit well with their gruesome neighbors, the “bonies,” who views their now beating hearts as the proverbial dinner bell. Soon the bonies, more bitter than ever, rise up and declare all out war, with the world’s only hope relying on a human/zombie team up.
–

Julie tries her best to fit in to her new beau’s world!
–
Clearly I was not the intended demographic (despite being a zombie fan) for this movie so writing a scathing review about what a terrible time I had as a horror fan would be redundant. I think mainstream (female) viewers who aren’t seeking anything hardcore will enjoy this and, to be fair, I’ve seen much worse. While its yet another retooling of the already worn-out Romeo and Juliet story, the zombie aspect does provide a separate message for those seeking higher meaning in their movie-going experience (which I’m sure all those tween gals out there showed up for).
–
How many of us go through life “unconscious,” going through the motions of everyday life without really living at all (zombies)? How many choose not to seek enlightenment nor improve their lives in favor of staying in the haze of what’s “comfortable” or giving up completely (bonies) while blaming and persecuting those that do?  WARM BODIES suggests that many of us, while not officially zombies, might still be classified as members of the walking dead.
–
To be fair, I should mention that I may be doing my fair share of projecting here and have recently experienced my own awakening of sorts. I wouldn’t say I was a zombie but certainly acting like a “boney” here and there. Needless to say, I did leave the theater smiling (while casually feeling myself up to make sure I hadn’t acquired female sex organs) and completely understood that often our “second” life is so much more fulfilling than our first.
–
Dave Fuentes~