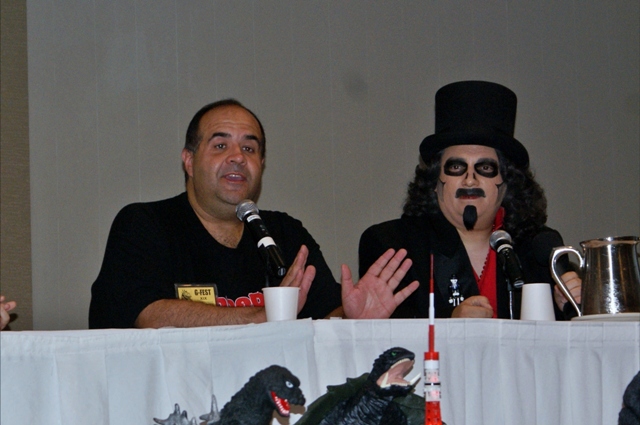 G-FEST (Godzilla Festival) is the quintessential celebration of Godzilla and all his fellow Kaiju (Japanese Monsters). I’ve been a fan of Godzilla and Gamera ever since I was a kid. Growing up in the 1970’s, it was via shows like Creature Features or The Son of Svengoolie to bring those movies to me. People who did not grow up with a horror host usually have a hard time understanding why some of us adult fans get so weepy with adulation at the mere mention of our childhood ghoul. Well, when you’re a “monster kid,” surrounded by more “normal” kids who want to play baseball or watch The Dukes of Hazard, the person faithfully delivering your favorite films becomes more than just a TV star, he becomes your idol…one of Godzilla proportions. In my case it also helped that I found my host’s corny humor hilarious and his less than stellar singing voice pitch perfect.

Last February I asked G-FEST Mastermind, J.D. Lees, if David Albaugh and I could do a forum at this year’s event talking about horror hosts and their cultivation of Godzilla fans. As mentioned in an earlier post, my Godzilla fandom was in no small thanks to Rich Koz’s Svengoolie from back in his “Son of” days. Actually, I credit Svengoolie with turning my young mind on to many different kinds of sci-fi/horror films including the giant bug movies like THE DEADLY MANTIS and TARANTULA as well as the more traditional Universal classic monsters. But it was safe to say that the day Sven presented me with Godzilla, the King of ALL Monsters, I would be hooked forever!

J.D. replied to my request stating that he wanted an outline of what the discussion would be about and that he’d think it over.  A couple of months later I decided to scratch the whole idea after learning that David would be unable to attend. Oh well…perhaps we could try again next year (SIDE NOTE: David is as big a G-Fan as myself and I’ve made it my personal goal to one day get him to G-FEST). Apparently something got lost in cyber space…

Two weeks before the event, J.D. asked if I needed AV equipment for my presentation (???). Apparently it was a GO after all! And, ironically enough, the very host responsible for my fandom would also be appearing (covered HERE).

I wasn’t thrilled about having to sit up there all by myself but, as fate should have it, I wouldn’t be. Svengoolie super-fan, Jamie Lee Cortese, agreed to join me last minute. Before graduating from high school, Jamie had worked extensively on a horror host research paper. This put her in contact with many horror hosts (along with a visit to the 2011 Horrorhound Weekend we David and I met her for her the first time) and she was very kind to share her stories of meeting many of them here on our site. Jamie and her family are about the nicest people around and, as she is a young fan who was only recently introduced to Godzilla via Svengoolie, was a welcome addition to the forum.

The biggest surprise came shortly before I sat down and was just about ready to begin the forum. In walked Svengoolie, himself, (despite having just signed autographs the previous two hours) and, to my delight, joined me on the stage. He talked about Godzilla and how he’d just spoken with quite a few fans crediting him as their Godzilla ambassador growing up. Before leaving he also said some very kind words regarding this blog. I was truly honored and it certainly shows what a great man Rich Koz truly is (and not just because he brought Godzilla into my life).

Soom the forum began with a brief Horror Host 101 followed by a video presentation I’d put together days before. This was a compilation of classic horror host skits and scenes that revolved around Godzilla and Kaiju films. Many of these were courtesy of my friend, Michael Monahan (producer of AMERICAN SCARY as well as author to its book version) who sent me these last minute. After the video we did a Q&A and there was no shortage of questions. Some of the questions were about Svengoolie and thank GOD Jamie Lee was there to provide insights even I didn’t know.

Before sharing the YouTube clips, I want to give a Godzilla-sized THANK YOU to Svengoolie, Michael Monahan, and Jamie Lee Cortese without whom I’d have never pulled this off. I also want to thank my son, Alex, and Ron and Angela Urban for taking pictures and giving their support! NOTE: the two clips provide a shortened presentation featuring only a quarter of the host clips I’d actually shown at the event.

Below is the conclusion (after about 20 minutes more of host clips). The ending Q&A was cut off about 2 minutes before it actually ended.

And here is the footage from Svengoolie’s show…