Last weekend, on a crisp Rhode Island day, I went and saw the movie SINISTER with the other founding Dave of this site, David Albaugh. We’d seen FRANKENWEENIE the day before and we both enjoyed it, though not as enthusiastically as Dr. Destruction apparently did (see HERE). Now it was on to something a bit more serious. I’d been enamored with this movie the moment I saw the preview and was cautiously optimistic. In other words…the way I need to be before going to see ANY horror movie these days. 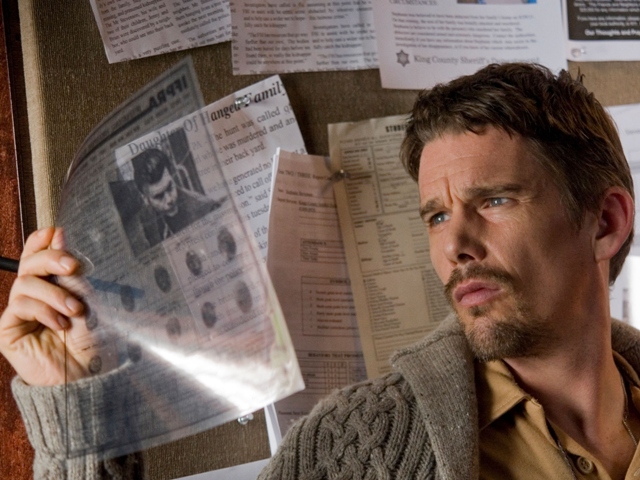 The film deals with true-crime author, Ellison Oswalt (Ethan Hawke), and his unsupportive wench of a wife, Tracy (Juliet Rylance), moving their family into a new house. Unbeknownst to his wife, Ellison’s choice in buying the place was far from random as their new dream home had been the previous owner’s nightmare, with the entire family murdered and one child gone missing. The ambitious author, intent on reviving his lagging, “one hit wonder” career, has decided that this unsolved mystery would make an ideal subject for his big comeback. And, as everybody knows, nothing improves your research ability like actually living in an old murder scene. You know…like how we NEED to have weathermen standing in the middle of a hurricane while they’re reporting one?

Tracy’s mad enough assuming the house might be down the block and Ellison is content to leave well enough alone. Normally I’d think him a cad for not being honest but, at the same time, she routinely offers him about as much support as a jock strap with a broken cup. I don’t know what it is with me lately but I keep “identifying” with the lead male characters in these horror films. This wife reminded me of my estranged one, and I kept seeing her image (using a British accent) throughout the entire picture. Aside from her short, blonde hair I think it may have been due to her dizzying inconsistencies of telling her husband “I support your projects” one minute while making him feel like shit about them the next.

“No pressure but if your book fails…I’m LEAVING you!!!”

Aside from her, the local police are equally schizo with the town’s Sheriff (played by ex-Republican Presidential hopeful, Fred Thompson) making a special point of telling the Oswalt’s how unwelcome they are while his Deputy simultaneously gushes for an autograph. Ellison’s unpopularity with the cops is due to his apparently uncovering “evidence” in a past crime story he did which led to the release of the man prosecuted. This took place about ten years ago but apparently almost every cop in the country is still sore about it. Oh well….at least he’s able to forge an alliance with the star-struck Deputy whose intelligence level goes from Barney Fife to Matlock in the course of 40 minutes.

Ellison no sooner sets up shop (which involves decorating his office like the Behavioral Science Division of the FBI) before stumbling across an old box left over from the previous owners. Inside are reels of Super 8 films and a projector. A quick preview of one of the films reveals the actual murder of the unfortunate former occupants. This offered the most chilling moments of the film – the grainy, silent films were convincing and I totally understood why Ellison Oswalt soon increased his daily Scotch intake from one glass to a full bottle immediately after viewing them.

And he ain’t the only one going through changes….

While he boozes it up and wifey-poo looks for more things to bitch about, his young son starts having severe night terrors (which includes contorting himself in a box) and his daughter starts painting frescoes on her wall depicting bloody murders and the dastardly fiend behind them all. 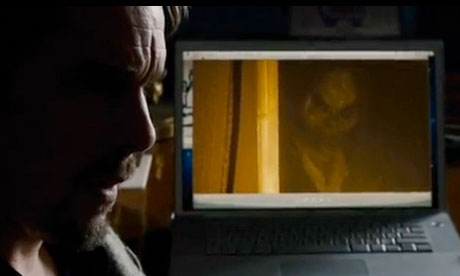 Careful scrutiny of the murderous films reveals a strange symbol and, yes, “sinister” visage of a strange man or creature. Ellison takes the symbol to a local college professor for identification. This is what I love about these films….if I brought a strange symbol to any of the local community college teachers in my area, I’d bet  you a $100 that none of them would recognize it unless it was the “M” from McDonalds. But, this being Hollywood, you can find the most obscure drawing, bring it to a knowledgeable local (which every town has), and they’ll instantly say things like, “Why that’s from an ancient Pagan deity named Bughuul!” as they do in this one.

While this film has some genuine creepiness to it it, I feel its definitely something you can wait and rent. Most of the “scares” are the jumpy kind as opposed to a genuine fear factor and the ancient Pagan “god” looked like every teenaged, metal head’s concept of a bad-ass killer. They would have been wise to have cut out many of its details in favor of a darker, more shadowy figure and should have also cut out scenes depicting his ghostly child victims. Especially if you’re going to have them walk in sync and tilt their heads like the back-up zombies in Michael Jackson’s “Thriller” video.

Ultimately, this is one movie where you know exactly where the train is going as soon as it leaves the station. The only thing Sinister to me these days is how these bigger budget Hollywood films can be so much less entertaining than a lot of the lower budget stuff coming from Europe (SIDE NOTE: we Daves watched JUAN OF THE DEAD the night before and LOVED it!).