I just got back from seeing THE RAVEN and, while there isn’t much to “rave” about, I’ve definitely seen worse. John Cusack plays the legendary Edgar Allen Poe and does a pretty good job portraying the tortured genius whom many horror fans will site as their favorite chapter in literature class. “God gave him a spark of genius drenched in misery,” states his frustrated employer, and this is something that both history and this film firmly establish.

I attended a matinee and was one of about 5 people in the theater. I was slated to see this film with my friend, Nikki, who is an English teacher and marks one of the few times when her movie interests and mine meshed. Of course a blogger’s schedule differs from that of a teacher, so I decided to give it a jump-start in the essence of time.

Edgar Allen Poe had a profound effect on American literature but his short life was marked by tragedy, poverty, and addiction. Poe died in 1847, officially from tuberculosis (some reports suggest rabies), though this film offers an alternative cause via a killer who mimics the murders written about in Poe’s stories. 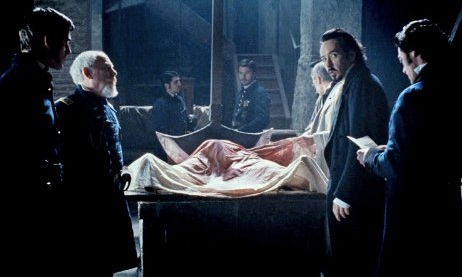 While at first suspected as the killer, Poe is quickly dismissed as investigators discover that the true culprit’s hands are much larger. When the killer is finally revealed, I found this deduction a bit strange since when he didn’t appear to be that much more imposing than Poe…but I digress.

The movie tends to be uneven and the murders are fairly tame with the exception of the infamous pendulum scene; where viewers are finally able to see the full gory details of the death instrument’s power. Cusack does a decent job portraying the famed writer which gives this film its best attribute; a chance to see what he might have been like. Arrogant, yet destitute and not the kind of guy that made friends easily at the local tavern. Its one thing to know that you’re smarter than everyone else, but another to go around reminding people of it – something Poe apparently had no trouble doing.  He maintains his haughtiness even in lieu of his love interest’s kidnapping where, upon reading a note left by the killer, proclaims “For godspeed, even his prose is barbaric!”

Although Nikki wasn’t along to confirm my theory, I strongly believe that this film may appeal more to literary types as opposed to us horror fans. Not for the story but for Po,e himself, who keeps this film from becoming all but forgettable. At the end of the movie Poe states, “Life is so much less satisfying than fiction.”

Not so far as he and this film are concerned.

One thought on ““The Raven”…Real Edgar Allen Poe’s life far more fascinating than this fiction.”