Welcome to part two of my series on the best alien invasion films of the 50’s. If you missed part one then by all means click HERE! 1951 featured quite a few entries in the alien invasion genre, two in particular that in my opinion, are two of the all-time best science fiction films ever released! The first one is THE DAY THE EARTH STOOD STILL, directed by Robert Wise and starring Michael Rennie and Patricia Neal.

The movie starts with reports of a mysterious object orbiting the Earth. The flying saucer lands in Washington and it’s occupant, Klaatu (played by Michael Rennie), has a message for the world. Though he comes in peace it doesn’t take long for a jumpy military person to shoot him in the arm. Klaatu is not alone though. His companion Gort, a giant robot, immediately shows off the alien’s power by using his eye beams to render the military helpless by melting down all of the weapons. Klaatu is brought to a nearby hospital and taken care of but it is quickly obvious that he is a prisoner.

While in the hospital Klaatu reveals why he came to Earth. He wants to warn the leaders of the world’s governments to discontinue use of nuclear weapons. Klaatu’s fear is that not only will we destroy ourselves but that we may take our weapons into outer space, affecting other worlds. Of course the world’s leaders refuse to meet and Klaatu escapes, wanting to go out on his own to learn more about earth and its inhabitants. Can’t we all just get along?

While out on his own Klaatu calls himself Mr. Carpenter and is determined to see if there is good in the people of Earth. He gets a room at a local boardinghouse and he gets to meet a variety of people, most of which are truly good. To show the leaders of the world the power he has, Klaatu arranges for a “safe” demonstration by shutting down the electrical power worldwide for a brief period. In typical earthling fashion, when the military finds Klaatu they shoot him dead. Gort retrieves his body and revives him after bringing him back to their flying saucer. Klaatu delivers one final warning and leaves.

THE DAY THE EARTH STOOD STILL is one of those movies, so many decades later, that holds up so well over time. The tensions in the world today are very similar to those of 1951 so the message is still just as important today. The all-too-real possibility of us destroying ourselves through use of nuclear weapons is a horror we have to live with daily…we just have to hope that cooler heads will prevail if the time ever comes where the use of nuclear weapons becomes a consideration. 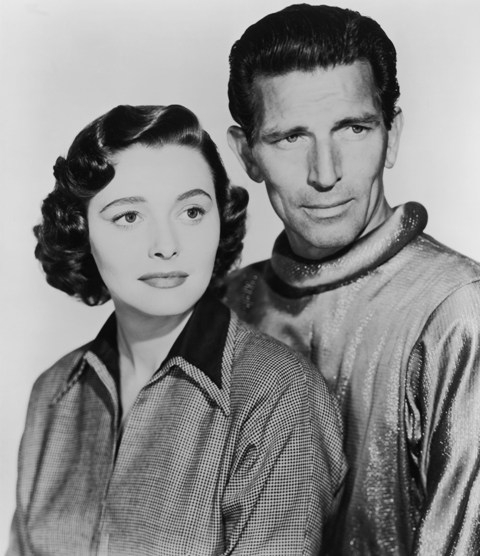 The visual effects of this film are pretty good, considering the technology of the time. Klaatu’s ship is exactly what you think a flying saucer should look like and the scenes of it coming in for a landing are beautifully shot and realistic. When the ramp and doorway appear it is a great effect as the ship appears to be seamless (an effect achieved by sealing the cracks with putty so that when the door opens, the seam suddenly appears out of nowhere). When Gort uses his eye beams to destroy weaponry, in typical fashion for 50’s sci-fi films, there is a bright flash around the weapon. In most films this effect is used to mask the fact that the item being destroyed is removed from the frame so that as the flash disappears, so does the object being “destroyed”. In most cases, to save on money, the item just disappears into thin air. In this film, the weapons are left in a melted heap. 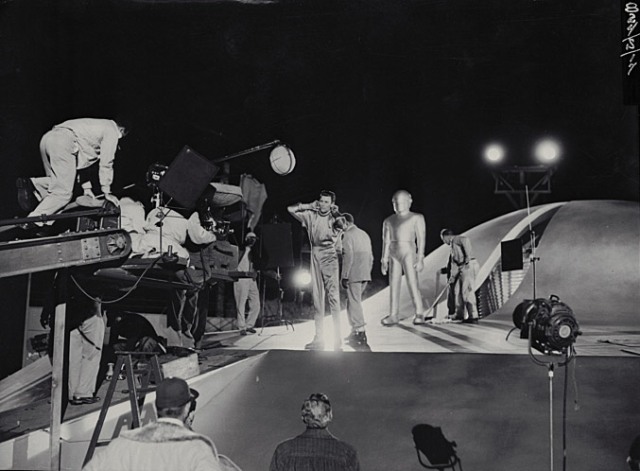 Rare behind-the-scenes shot as Klaatu prepares to warn the Earth.

Michael Rennie is perfect in the role of Klaatu. Originally the studio wanted Spencer Tracy but then decided that his face would be too recognizable, lessoning the believability of the character. Though he is an alien from outer space, he is warm and charming and very respectful, even to his captives. When Gort reacts to him being shot initially but destroying the military’s weapons, Klaatu immediately makes sure to stop Gort before any more damage is done. He is a very likeable character and you feel for him in his mission and determination.

Patricia Neal is also well cast as Helen Benson. She is kind and caring, a single mom as a result of her husband being killed in World War II. Benson is sympathetic towards Klaatu and is more than willing to help him and to show that he is a good “man”. This creates a great love triangle between her, Klaatu and her fiance, Tom Stevens (played by Hugh Marlowe). Neal continued to have a successful career right up until her death in 2010 with such movies as BREAKFAST AT TIFFANY’S (1961) and GHOST STORY (1981) as well as many television appearances.

Hugh Marlowe rounds out the leads with his character of Tom Stevens. From the get go Stevens is a self-centered and very selfish man…unlikeable in every way. His fiance is Patricia Neal’s character and unfortunately, it is not too believable that she would be with such a jerk like this! This is probably the only flaw in the story but it does create a lot of tension between Tom, Helen and Klaatu, which obviously was needed. Hugh Marlowe went on to star in the 1956 film EARTH VS. THE FLYING SAUCERS (as a much more likeable character).

Lastly, one of my favorite aspects of this film, as well as many science fiction films of the 50’s, is the use of the Theremin in the musical score. This instrument seems to have been designed specifically for this type of film and it adds so much to each film that it is used in! It is creepy and exciting all at once and Bernard Hermann, the composer, is dead-on with this score.

One thought on “Alien Invasion Films of the ’50s – The Day the Earth Stood Still!”