It was hot down in Kentucky for the recent FRIGHT NIGHT FILM FEST which saw the appearance of John Carpenter, Linda Blair, and Henry Winkler – along with a cache’ of independent films to be unveiled to an overheated (it was humid and like 100 degrees, I kid you not) horror audience. Among all these events and “A-list” horror celebrities was a small conclave of horror hosts who were invited by Horrorhound’s Jason Hignite to put on a LIVE show. While nowhere near the number of hosts seen at the Indy Horrorhound, FRIGHT NIGHT was visited by Midnite Mausoleum, Captain Crypt & Fenriz Fatal from Horror Dungeon, and The Count & Countess Gregula. Mr. Lobo & Dixie from Cinema Insomnia also made a stop through (to be covered in a future post)  and I am pretty sure I saw Mel Praxis walking around too, but was on my way to the John Carpenter Q&A and never able to formerly meet him.

The plan was that there would be a showing of John Carpenter’s earliest film, DARK STAR and that each host would get up for 10-15 minutes and do a RIFF TRAX  like performance, ripping on the lackluster film. The Gregulas  carpooled down with me and both they and Dr Destruction (who had to cancel last minute) seemed uneasy regarding what to expect. Despite being familiar with performing, the prospect of getting up unscripted in front of an audience was a nerve wracking one at that. But there was one group of performers who had NO problem performing LIVE – with or without a script…

Atomic Age Cinema – featuring Dr Calamari, Basement Boy,  Baron Mardi and Woody the Clown are no strangers to working a crowd and have been doing so for over six years. “It began in 2004 as a fundraiser for the Cinephile Film Arts Organization,” says Calamari. “It was dedicated to helping local filmmakers get their films made and shown. Cinephile eventually transformed into the Dark Carnival Film Festival and the profits from AAC!” I’d met them before at Horrorhound Weekend and always enjoyed talking with Doc Calamari who is not only a great guy but has one of the coolest & original looks. His tentacled face is matched only by his lone silvery eyeball that will have you quickly forgetting  there’s a man underneath!

Despite the nature of this site, my original goals for attending FRIGHT NIGHT was less about covering hosts as it was about gathering info from THE DARK NIGHT OF THE SCARECROW reunion. However, no respectable “Dave” would ever shy away from a horror hosted event and it should come as great comfort to my host friends that I skipped the “nude body painting show” in favor of attending this one. I knew it was slated to begin at 10:30 pm and tracked down a FRIGHT NIGHT attendant to assist me in finding its location. “Uh….I don’t know. Maybe look at the wall and see if there’s a sign?” Gee, thanks Einstein! Listen,when you’re done NOT helping anyone here, maybe you can check out the next room. I think I saw something shiny!

As I looked around for the Gregulas (passing a long line of conventioneers who suddenly had an interest in art) I ran into Jason Hignite. Let me state for the record that, when I die, I am hoping to come  back as him. Not only does he get to work with horror hosts and write for Horrorhound Magazine, but he can always be seen at conventions with a cocktail in one arm and an attractive woman (in this case TWO) in the other. I mean no sarcasm when I say this; don’t bother reading a Martha Stewart magazine if you want to know the definition of “Living,” just hang around with Jason! 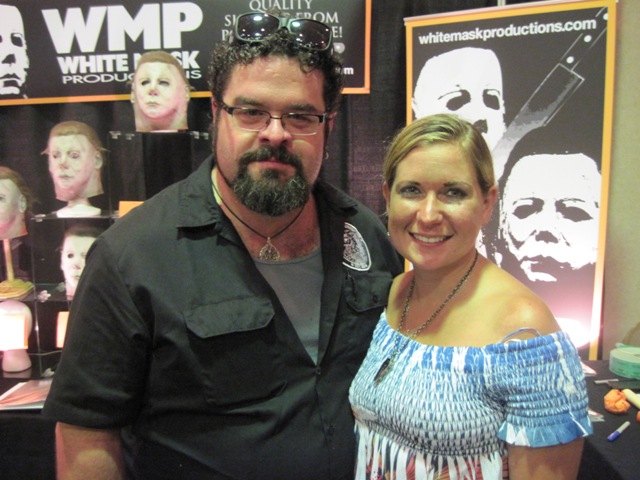 Hignite saw me and gave a warm greeting (despite neither offering me a sip of his drink nor one of his companions) and pointed in the direction of the show. I followed a winding hallway and, if there had been any question that I was headed to the right place, it was soon squelched at the sight of Woody the Clown pacing by the entrance. “We don’t have a f*cking movie!” he yelled. “No one has a copy of DARK STAR!” Well, at that point, I had no more reservations about missing the nude art show and knew that this was the place to be!

Before the main event we were treated to a screening of Dark Carnival’s DVD featuring The Vampira Tribute from 2010 – HOSTING HORROR: THE LEGACY OF VAMPIRA.  Many people don’t realize that it was Dark Carnival who came up with the idea of a Vampira Tribute – eventually finding its way to Horrorhound. In this we should all be eternally grateful.  The video features clips from that amazing afternoon as well as interviews from many of the participating hosts; Penny Dreadful, The Bone Jangler, and Karlos Borloff to name but a few. David and I each bought a copy of this video at the last Horrorhound and it has always been sad to me that the “other Dave” wasn’t there to see it LIVE with me. He, like myself, loves horror hosts and I know he’d have really enjoyed it. I appreciate Dark Carnival for creating this DVD – if only so he , and others unable to attend, could get a glimpse of it. Tonight’s venue was a small room but most seats were taken. As I settled in, I looked around and noticed Midnite Mausoleum’s Robyn Graves kicking back in more seasonal attire. 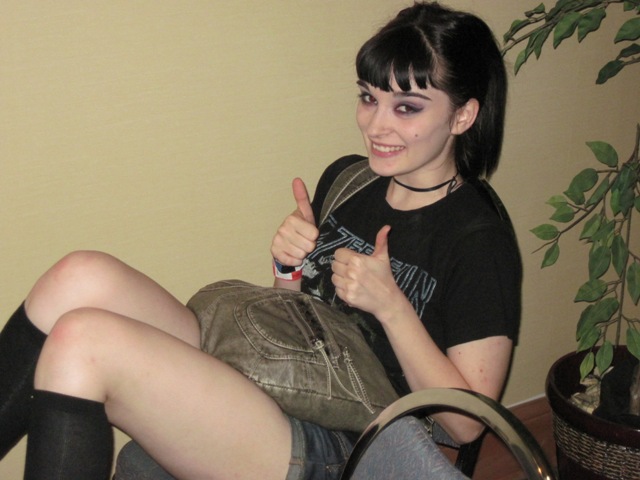 Horror Host “summer fashion” continued with the arrival of The Count and Countess Gregula – Gregula sporting a rather unique vampire look with a T-shirt, overcoat, and shorts. Here’s an interesting tidbit; not long after FRIGHT NIGHT, Gregula was cast for a role in a new NBC Fall series called “The Playboy Club.” I can’t help but think that the casting director may have seen one of these shots from the DARK STAR event before making their decision! 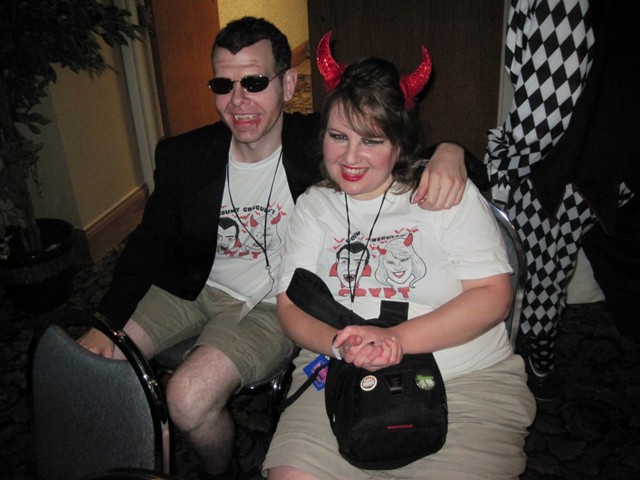 Soon the big moment arrived with a copy of the film arriving just in the nick of time. Showing their mettle as LIVE performers, it should be noted that the gang from Atomic Age Cinema were willing to perform to a DVD copy of ANY movie so long as it was readily available. As the lights went down, the show became less like RIFF TRAX and more like THE ROCKY HORROR PICTURE SHOW. The Atomic Age Cinema guys remained standing while everyone in the audience was encouraged to belt out comments and participate. In this I was at a distinct disadvantage having no alcohol in me, though this in no way stopped The Countess from stealing the show.

I’m here to tell you that she was absolutely hilarious utilizing her dry sense of humor like an artist delves in oil. Many folks believe that vampires have no blood but I can safely say that isn’t true as some of the “adults only” comments flying out of The Countess’ mouth left her counterpart turning a decisive shade of RED. Further adding to Gregula’s chagrin was my suggesting to him that perhaps his wife was the actual horror host and he should start thinking of himself as the sidekick. Gregula looked like I just “staked” him but, rest assured, I meant it only in good fun and they BOTH added a lot to this event.

In between bouts of laughter, and inappropriate comments, were special “games” organized by Atomic Age Cinema complete with prizes. The first of which was a drinking challenge in which Jason Hignite further secured his status as a party god and one we should all revere. As I write this I am making definite plans to start stalking him!

As for the movie it self, what can I say? If ever there was a film in need of the “horror host treatment,” this was it. I’d like to say that it was a rip-off of STAR WARS had it not been for the fact that this film was made a few years before. DARK STAR is definitely not something you’d want to watch again and again but, for these purposes, it was a welcomed attraction. A few members of the audience got so caught up, one eager participant ended up wearing a popcorn bucket on his head before winning a prize for his belly dancing.

The highlight of this event, however, was turning the lights on and seeing the film’s lead cast member, Brian Narelle, sitting amongst the audience! Sadly, the director of the film, John Carpenter was no where to be seen (no doubt sitting up in his hotel room issuing “Order 66” and the extermination of the Jedi Knights).  Narelle seemed to enjoy the show and was given a special Atomic Age Cinema T-shirt for being such a good sport!

Narelle shows off his new T-Shirt!

As the event ended, everyone left with big smiles on their faces (probably equaling the hang-overs they’d have the next day) and it was clear that, despite recently losing their regular performing venue, Atomic Age Cinema is far from beaten. In the spirit of their new-found solidarity, they would not be confined to a booth at FRIGHT NIGHT and moved freely about the entire weekend. Everywhere they went they brought laughs and smiles at a convention that desperately needed it.  This was further illustrated on the last day of the convention when, eager to take advantage of the familiar looking walkway that joined the two buildings of the hotel together, they decided to re-enact the cover of the Beatles’ “Abbey Road.”

I look forward to seeing them again, hopefully at the next March Horrorhound Weekend which, I am told, will take place in Columbus, Ohio this time instead of Indianapolis. We Daves will definitely be there and hope you will be as well!

Now…. if you’ll excuse me, I must hurry on my way! Jason Hignite just “tweeted” that he’s leaving his apartment.